The sequel to the seminal VR stealth action-adventure game Budget Cuts ups the ante in every way. Beginning right where the original left off, Budget Cuts 2 adds new enemies, new weapons, and new, larger environments for players to explore.

Budget Cuts 2 ranks among the finest VR games to date.

It’s not often you get to delve into an experience that so completely encompasses the medium in which it’s built for. When you enter the world of Budget Cuts 2, the concept of virtual reality immediately makes sense. Sneaking, hiding, surveying, stealing, evading, sniping, and shanking would all feel out of place if experienced any other way, and that’s what makes Budget Cuts 2 so brilliant.

But this experience isn’t exclusive to Near Corporation’s latest VR stealth action-adventure title. Budget Cuts 2 is a clear extension of the arm that was built in the first game. It begins, quite literally, right from the moment the first game ended.

From the get-go, you can immediately tell the change in scope that took place in development from the first to the second game. Everything is bigger. It’s better. It’s more grandiose and ambitious, and it all starts in the caboose of a train.

This review will certainly contain spoilers regarding the first game. If you haven’t played that one yet, you’re certainly doing yourself a disservice and should check it out immediately. I played the entirety of Budget Cuts 2 on the Oculus Rift S.

It became clear at the end of the original Budget Cuts that the boisterous CEO of Transcorp, Rex, had been eliminated at some point in the past by Adam, the evil robot that runs the HR department.

While you may have escaped Adam’s clutches at Transcorp headquarters, he’s now got a personal vendetta against you and will stop at nothing to track you down.

The end of Budget Cuts may have felt more like a horror game than anything, but the nightmare is just beginning as you venture into the heart of Transcorp’s manufacturing wing and the city that’s now seemingly entire inhabited by its creations. 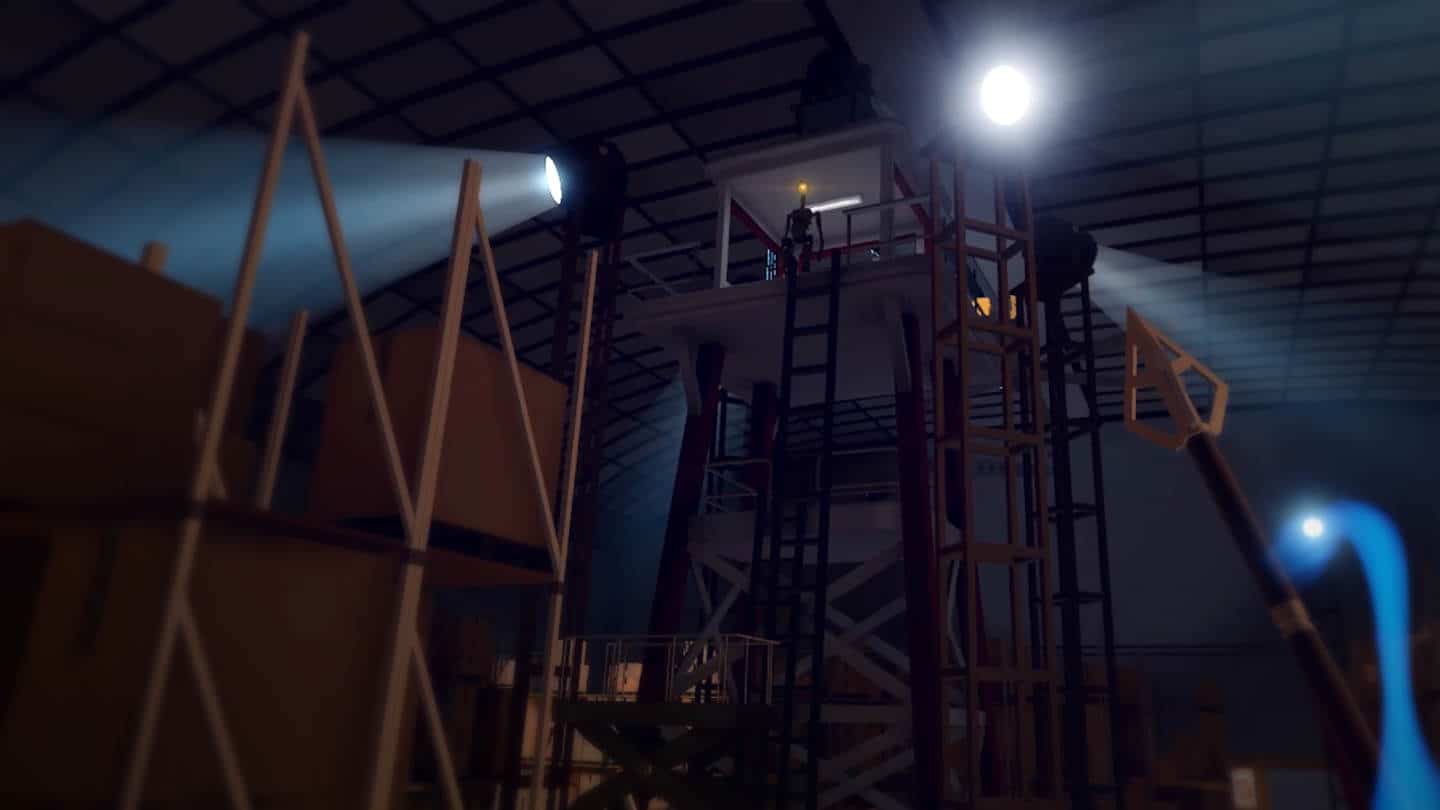 It’s these new environments that bring the biggest change to the sequel to the seminal VR stealth action-adventure game, and comprise the bulk of the changes that you’ll experience throughout this 10+ hour adventure.

Unlike many VR developers, who seem content with providing 30 minutes of entertainment for $15 or $20, the $30 that it costs to pick up Budget Cuts 2 delivers hours upon hours of entertainment. It’s almost as if Fast Travel Games enjoys playing in VR as much as we do and it’s very refreshing to see!

Like the first game, Budget Cuts 2 is designed as a stealth action-adventure game. That means you’ll be sneaking around, avoiding (or mostly eliminating) robot guards that are already on the hunt for you. Teleportation is still the only method of travel, and while many games use teleportation as a means to an end, Budget Cuts actually uses teleportation as a gameplay mechanic.

You see, unlike other VR games that don’t explain why you can magically teleport, Budget Cuts weaves the teleportation gun into the story much in the way that Portal does with its portal gun. Without it, the game wouldn’t make as much sense as it does.

It’s not confining and restrictive as teleporting is in many VR games. It allows you to get to areas you normally wouldn’t ever be able to get to, especially if the game relied on simple joystick movement.

But, more importantly, it enhances the feeling of being a sneaky spy and takes your mind off the movement. Instead of worrying about moving in the right direction with a joystick while you position your body, you feel in control of the situation and are more concerned with what’s happening in your surroundings. 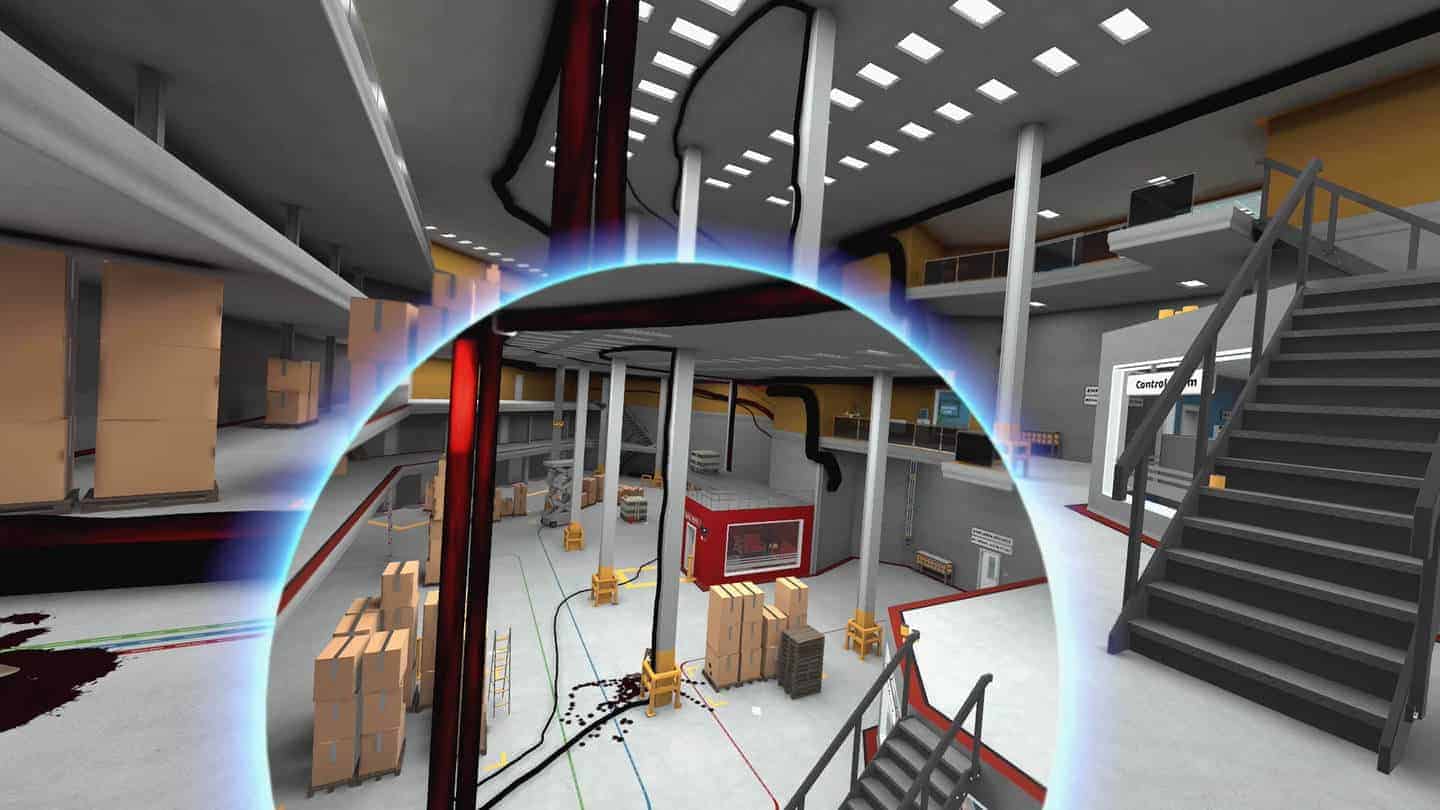 Like the original, you shoot a small ball out of the red teleport gun but won’t immediately warp. Instead, you’ll be greeted with a portal that allows you to see the surroundings around the ball. This gave me plenty of opportunities to put myself in a precarious place, watching my actual surroundings while plotting my next move with real strategy.

A new mechanic of shooting the ball through vacuum tubes to fast travel to areas was one of my favorite new additions, although I do wish it was utilized a little more often.

You’ll also find that doors and entryways aren’t just hidden behind a keycode or unlocked with a keycard this time around. You’ll also be scanning the eyes of robots to venture to new areas, flip giant power switches on and off, or even use one of those new vacuum tubes to get around.

Stealth and environmental awareness are more important than ever, as environments are no longer confined to office environments with cubicles, rooms with doors, and ceiling crawlspaces. These still exist throughout the game, depending on the level, but are far from the only environments you’ll be in.

Paramount to the enhanced experience is the new weapon: a bow. Quite obviously inspired by one of co-developer Fast Travel Games’ other big VR titles, Apex Construct, this bow can be used to fire arrows, as well as the other new weapon, grenades. These two weapons introduce a broad range of ranged attacks, something that simply wasn’t present in the original Budget Cuts.

I was worried at first this would be an overpowered weapon. The original game only allows knives, scissors, and throwing darts to be used as weapons, essentially limiting combat to melee interactions and the rare occasion where one of these weapons can be thrown. 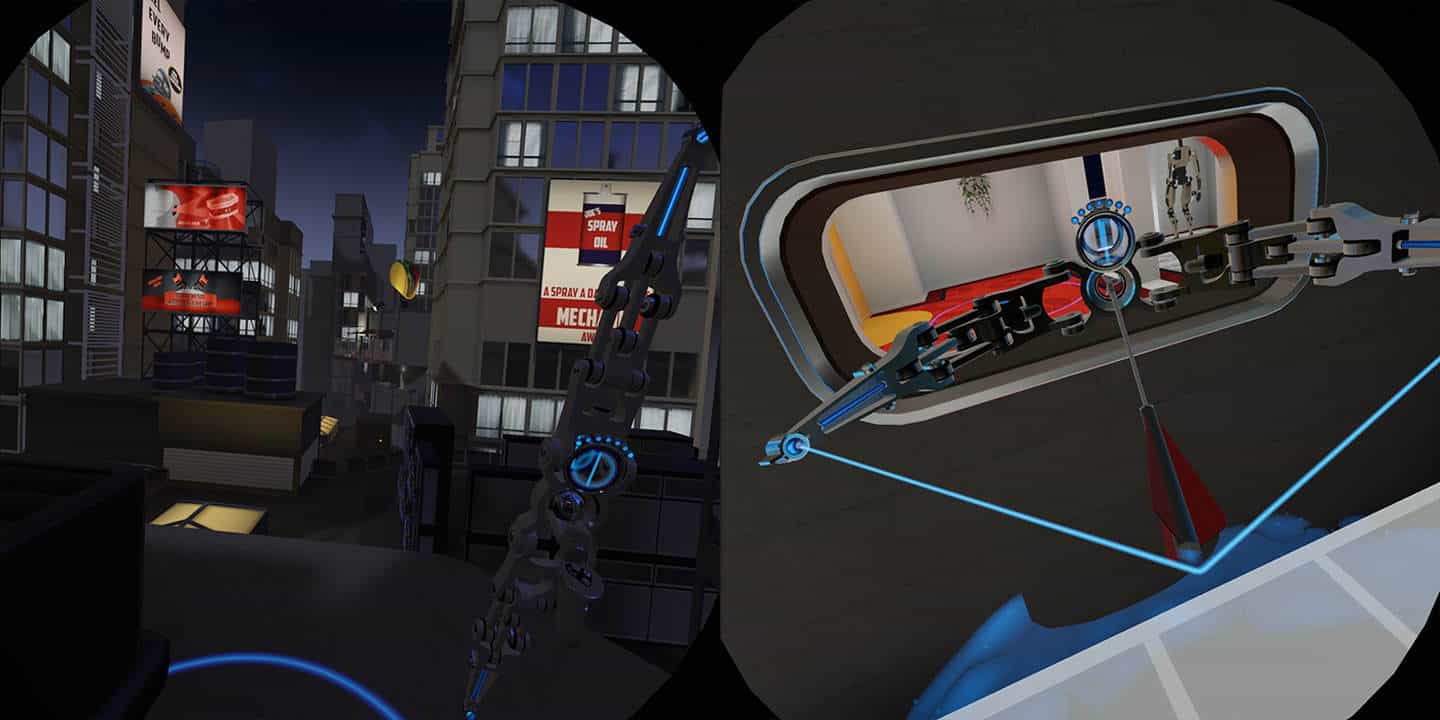 Thankfully, this wasn’t the case. Knocking the arrows is slightly cumbersome, likely to nerf the weapon a bit and aiming, too, seems a bit more difficult than it should be. Compared with Apex Construct, where the bow is your primary weapon, the design here feels like it was intending to make you feel more like a “regular” human rather than a cyborg or a super-human with mad bow skills.

A brand new type of enemy makes a rare appearance but is daunting when it comes around. The Prosecutor, which bears a grenade launcher and a riot shield, is a formidable enemy indeed. It’s a very good thing you are equipped with ranged weapons in this game because this new enemy type would be nigh impossible to dispose of with just melee weapons.

Ranged weapons also play a part in making the new environments feel spectacular. While you’ll run through familiar office buildings and cubicles throughout the story, much of the game takes place outdoors or in much larger environments than the original game provided. That’s a refreshing change of pace without feeling too foreign to Budget Cuts’ trademark stealth gameplay. 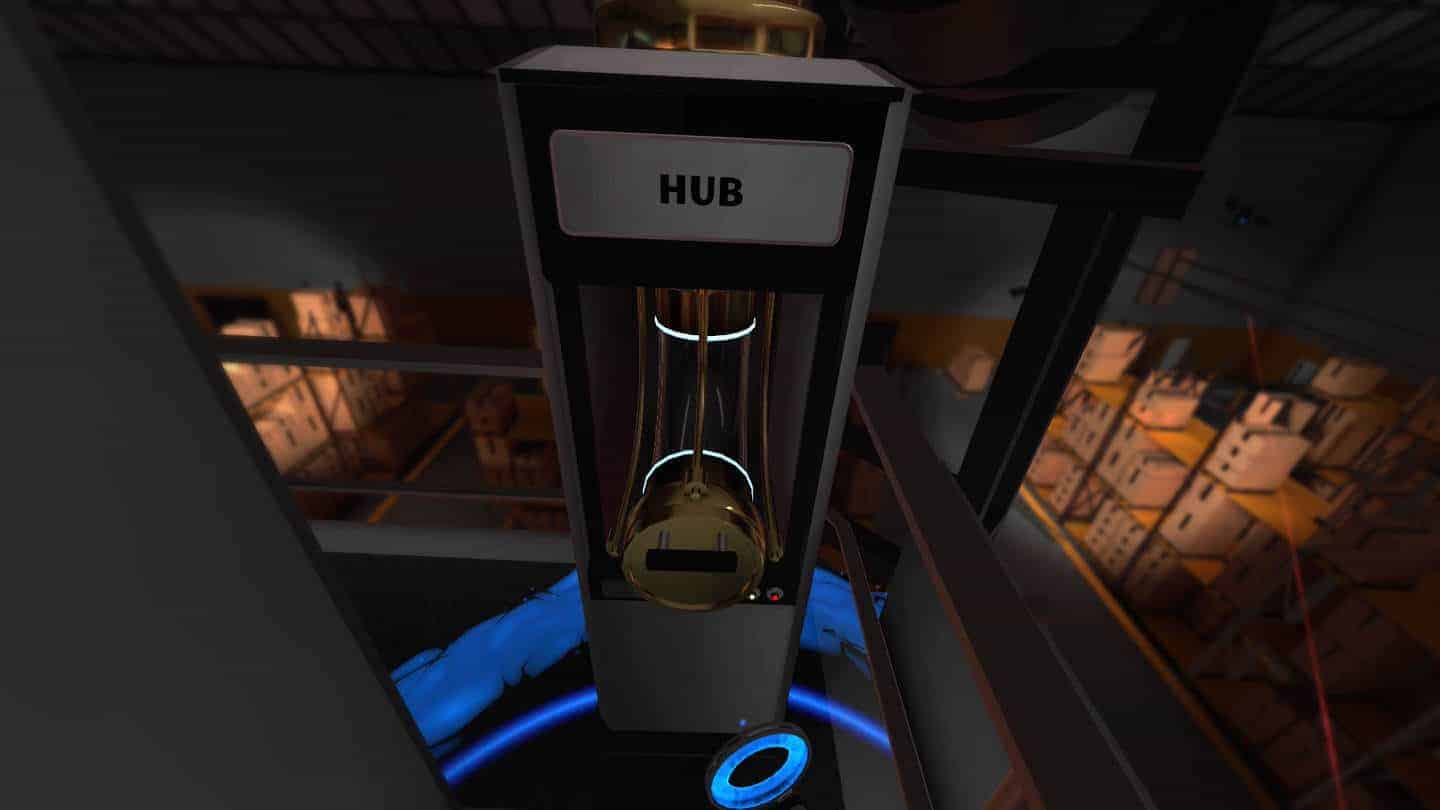 Just as in the original, there are plenty of ways to go about solving a solution. Thanks to the excellent traversal system, it’s easy to plan ahead and experiment with various strategies for each scenario. The magnifying glass has also been improved to help spot enemies, which will appear as red silhouettes when peering through this tool. It’s just a shame the experience was buggy and kept me from regularly using it.

Visually, the game is incredibly appealing without being too simple or too gaudy. The color palette takes on a very different look and feel in this game when compared to the first, but the game maintains a continuity and art style that still appears right in line with that of the original.

The only issues I had were in the form of bugs, which often manifested themselves in more annoying ways than anything game-breaking.

In general, I ran into several visual bugs that I didn’t experience in the first game. Objects would sometimes disappear and reappear, there were some odd physics issues, and the viewer screen on the television (where others in the room can watch you play) also exhibited lots of objects disappearing and reappearing.

Likely these small issues will get fixed in a short time after launch, but none of them affected gameplay in any way. They were more of a “fourth wall” breaker than anything.

The theme of Budget Cuts 2 is “efficiency”; a phrase you’ll regularly hear spoken of over the PA system throughout all of the game’s Transcorp-owned facilities. As a result, robots are smarter than ever, more capable than ever, and more deadly than ever.

It’s not just the new Prosecutor enemy that’s a deadly addition, though. Those Supervisor robots can now open more kinds of doors, are able to track you down better than ever, and will even investigate other robots who have been “murdered”. 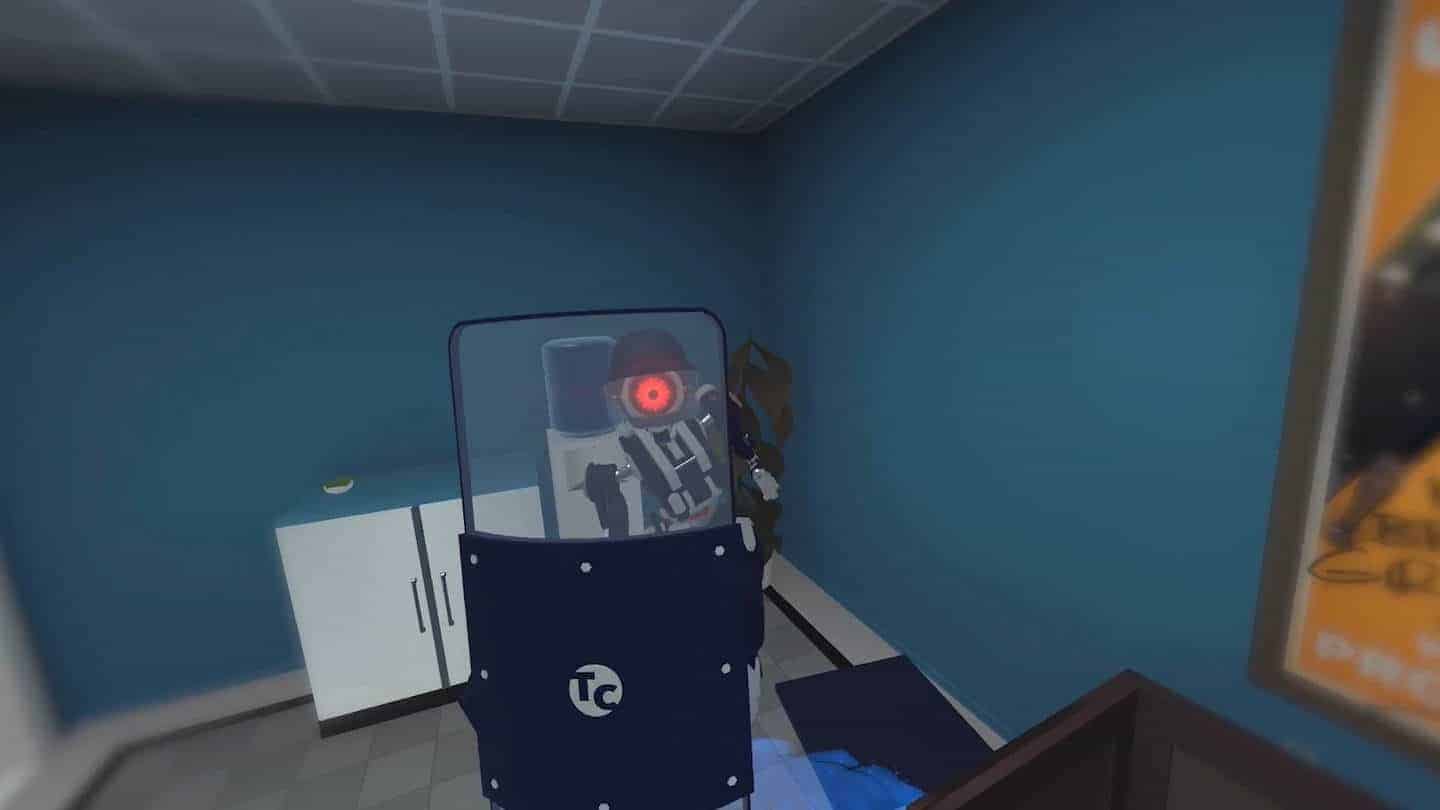 This creates an environment that forces you to be more stealthy than ever, as there are fewer places of “safety” as you move along these larger, more open spaces. Even weapons won’t last as long as they did in Budget Cuts, as even normal difficulty only allows for one use out of each weapon. Once a knife, arrow, or anything else sharp hits a robot, it’s bent and dented beyond any further use. That was once reserved only for the hardest difficulty.

Adam’s reappearance is certainly welcome, as it was easily one of the most amazing parts of the original game, and represents the biggest narrative and tone change of the entire original game.

My only disappointment here is that we don’t see enough of Adam in this game. I really was hoping for quite a bit of time running from him in true horror game style, but it’s possible that it was decided that this would take too much away from the stealth nature of the game. 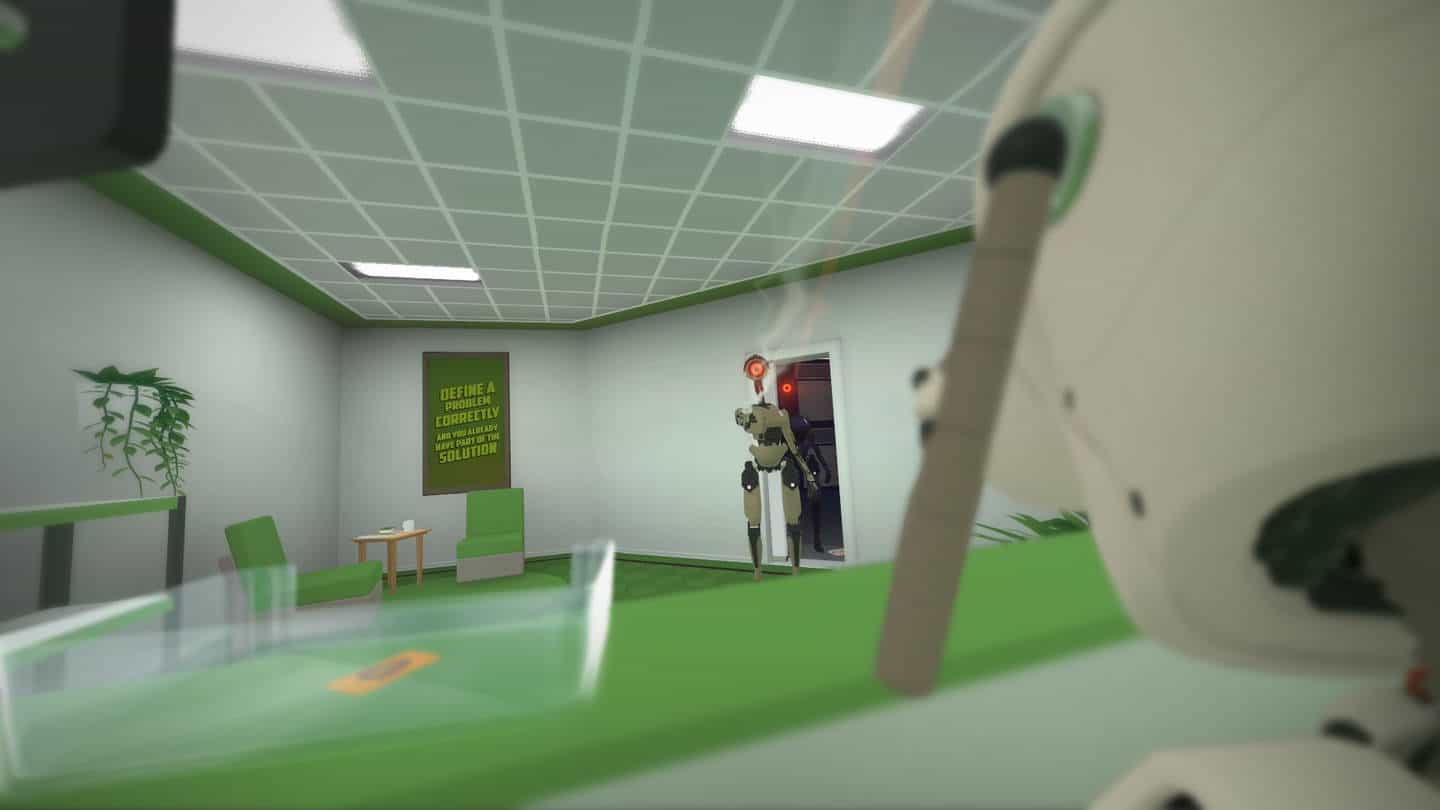 It’s not often that sequels eclipse their predecessors. After all, it’s difficult to top the feeling of wonder that an original entry in any series creates, no matter if it’s a book, movie, or game. Budget Cuts 2 achieves the rare honor of, somehow, being better than the first. It’s bigger, more varied, more difficult, stealthier, scarier, funnier, and just all-out Budget Cutsier in the absolute best of ways.

While you won’t need to play the first entry to understand what’s going on, there’s really no reason to not play the original before you jump into its sequel. After all, this builds upon everything in the first, from the mechanics to the story, and improves not only on the ways and methods of stealth and movement from the first but also in quality-of-life features that make these new environments and scenarios all the more enjoyable.

This is the defining stealth series in VR right now, and it’s one every single owner of a PC VR headset needs to play.