The Samsung Galaxy S10 Lite seems to be on its way, as it surfaced on Geekbench. What’s odd here, is that this phone is more powerful than anyone has expected, at least in the SoC department.

The device surfaced on Geekbench under the SM-G770F model number. It managed to score 742 points in the single-core test, and 2,604 points in the multi-core test.

What’s odd here, is that the Galaxy S10 Lite is fueled by the Snapdragon 855 SoC, claims Geekbench. Its test results back that up, actually.

The Galaxy S10 Lite is supposed to be a mid-range smartphone, so why would Samsung include a flagship SoC on the inside? Well, that’s the interesting part. It seems like the company may be looking to push the ‘Lite’ version up the food chain for some reason.

This phone won’t exactly be a ‘Lite’ version compared to the other Galaxy S10 phones, though, it seems. In addition to that flagship SoC, the Galaxy S10 Lite will also pack 8GB of RAM, claims Geekbench.

The Galaxy S10 and S10+ both include 8GB of RAM, while the Galaxy S10e ships with 6GB of RAM. So, in the SoC and RAM departments, this phone will be just as powerful as other S10 flagships, and it will even have more RAM than the Galaxy S10e.

Android 10 coming out of the box

That is pretty much all the information that Geekbench shared. We do not know what display to expect, what will happen with biometric recognition tech here, how large will its battery be, etc.

The Galaxy S10 Lite is still a mystery, in many ways. This SoC and RAM choice by Samsung is kind of puzzling, though. The company seems to push the ‘Lite’ version of the Galaxy S10 in flagship waters, and that’s quite odd.

We do not know when will this phone arrive. It is expected to arrive soon as rumors have been circulating for a while, and now this Geekbench listing appeared.

If the phone ends up sporting the Snapdragon 855 and 8GB of RAM, it will probably not be that cheap. We’re not expecting this phone to cost under $700 in the US, that’s for sure, which is really odd for a ‘Lite’ version. 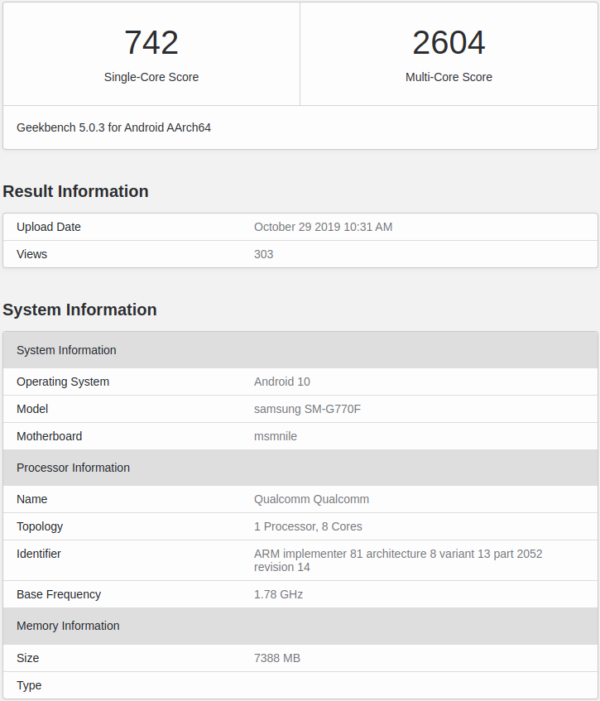