Samsung has secured a new patent which reveals a rather interesting display. This new patent shows a smartphone that includes rather extreme display curves and some sort of side touch controls.

The focus here is not on the phone itself, though. This patent has been submitted by Samsung Display, so the focus is on its display. That being said, do not pay attention to the design of the device all that much.

Now, if you do take a look at the provided images, you will notice something rather interesting. The included display is curved on all sides, while the central (flat) part of it is marked with white lines.

Those lines will not be present on the display itself, of course, they’re just marking where the flat part ends, and the curved portion begins. Those curved sides will have some sort of special functionality, which is why sections are separated in these sketches.

All four sides will curve up to 90 degrees, it seems, which is a considerable curve That display will cover the vast majority of the phone’s sides, and its whole front side it seems.

This is a rather interesting design, but it makes us wonder where is the front-facing camera. The same goes for an earpiece, and other front-facing sensors that smartphone usually have.

It is worth saying that this is just a display patent, so Samsung may not utilize it until it’s able to fit all that under the display. Under-display cameras are coming, and the same probably goes for other sensors.

Side-touch functionality will be included

This Samsung Display patent also suggests that those extreme display curves will offer some extra functionality. You will notice icons are present on the right and bottom sides of the display. We presume that those icons will be dynamic.

The UI may show them to you based on what you’re doing on the phone, or you may be able to customize that… but they will offer some extra functionality, that’s for sure.

Letsgodigital believes that the rumored Galaxy One smartphone will include such a ‘3D display’. The Samsung Galaxy S11 will probably resemble the Galaxy S10, and have a centered display camera hole.

The company almost certainly will not try to create some that ‘crazy’ with the Galaxy S11. The Galaxy One is expected to become a new flagship smartphone with an innovative design, and this display could provide that. This display may become Samsung’s response to various Waterfall Displays out there. 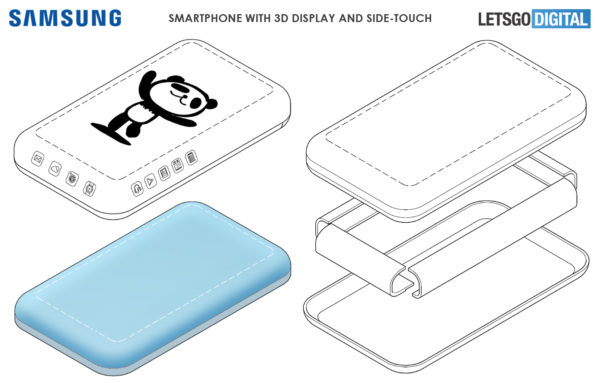