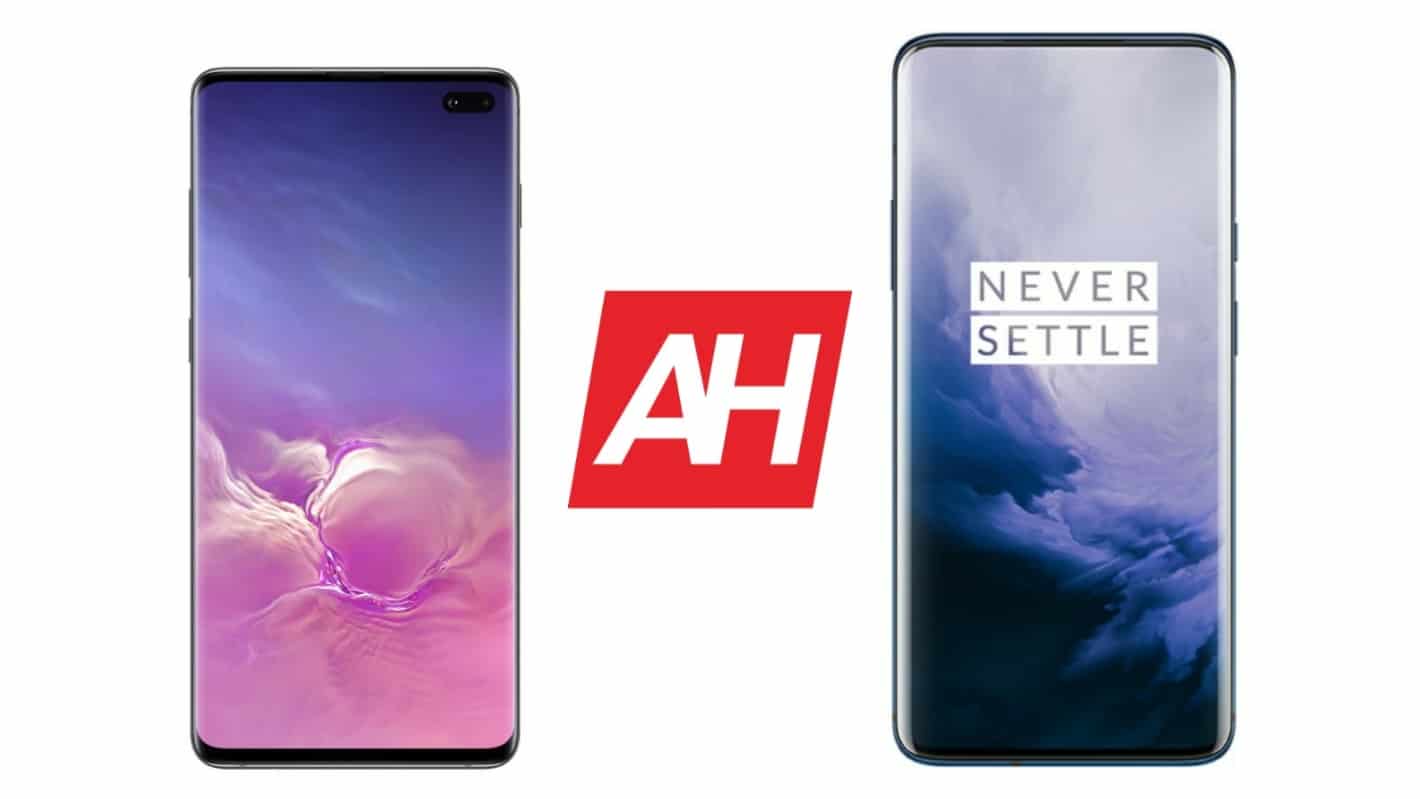 Back in May, we compared the Samsung Galaxy S10+ vs OnePlus 7 Pro. Well, since then, OnePlus had released a new flagship, so it's time to see how the Galaxy S10+ and OnePlus 7T Pro compare.

These two phones are the best their respective companies have to offer, not counting the Galaxy S10 5G, that is. Both devices are fairly large, and they're both made out of metal and glass. They have some similarities, but for the most part, these two are considerably different phones.

We will compare the Galaxy S10+ and OnePlus 7T Pro across a number of categories, as per usual. This comparison will hopefully be able to help some of you to make a final purchasing decision. Each of these two devices has its positives and negatives, and we'll try to present them here.

If you do not like bulky devices, it may be wise to avoid the OnePlus 7T Pro. Also, if you don't like large devices, you may want to steer clear of both of these phones. Both of them are fairly large, there's no way around it.

Both devices include curved displays, and both are curved on the back as well… and quite slippery. The OnePlus 7T Pro includes a vertically-aligned triple camera setup on the back. The Galaxy S10+, on the other hand, offers three horizontally-aligned cameras.

The OnePlus 7T Pro is easier on the eyes, that's for sure. Both its front and back sides look nicer to, as the phone's display doesn't have display holes of any kind, while its arrangement on the back also looks better. Both phones have extremely thin bottom bezels, and we'll give this category to the OnePlus 7T Pro. That device simply looks sleeker across the board, while both offer sturdy build.

So, what about the display? The Galaxy S10+ surely gets an easy win in this category, right? Well, no, not really. Things have changed in the display department, displays on Samsung's flagships are no longer as superior as they once were.

The Galaxy S10+'s panel is protected by the Gorilla Glass 6, while you'll find Gorilla Glass 5 on the OnePlus 7T Pro. Both phones support HDR10+ content, and both look great to the naked eye.

Both displays are extremely sharp and vibrant. They offer great viewing angles, and great contrast. Colors are extremely punchy, and everything looks crips on these two displays. We will give a slight advantage to the OnePlus 7T Pro, though.

That may surprise some of you, but the OnePlus 7T Pro's display has been further tweaked since the OnePlus 7 Pro, despite the fact it's the same panel. It simply looks just as impressive as the Galaxy S10+'s panel. When you start using it, however, it has an advantage thanks to its high refresh rate.

The OnePlus 7T Pro features a 90Hz display refresh rate, while the Galaxy S10+ is stuck at 60Hz. This will make the content that is displayed silky smooth when it's moving. Using the Galaxy S10+'s panel will seem a bit outdated in comparison. We'd place these two panels side-by-side if both were on the same level when it comes to refresh rate, but considering they're not, the OnePlus 7T Pro will get a small advantage.

In terms of performance, both phones are great, they really are. Both are equipped with the latest and greatest specifications, while both companies managed to do a good job when it comes to optimizations.

These two phones can handle pretty much everything you throw at them, no doubt about that. They have the latest processors, and plenty of RAM. The OnePlus 7T Pro does have a slightly more powerful SoC than the Galaxy S10+, while it also includes more RAM than Samsung's flagships. On top of that, the phone ships with UFS 3.0 flash storage, compared to UFS 2.1 included on the Galaxy S10+.

Both phones do perform great, but we'll give a slight edge to the OnePlus 7T Pro here. It comes with faster flash storage, more RAM, a more powerful SoC, and a smoother display… all of that results in a somewhat smoother performance.

Don't get us wrong, the Galaxy S10+ is a great phone, and it performs great, but it doesn't feel as smooth at the OnePlus 7T Pro. OnePlus' software has something to do with that as well, as it's lighter than what Samsung has to offer. The OnePlus 7T Pro is the winner here.

In terms of battery, well, they're both really good. These are not the best smartphones on the market in this regard, but for the vast majority of users, they'll be able to keep going throughout the day.

Both of these phones are capable of providing 6+ hours of screen on time in most usage scenarios. Your mileage may vary depending on how you use your phone, but we did not have a problem getting over that mark with both phones.

If you own(ed) the OnePlus 7 Pro, the 7T Pro is comparable in terms of battery life. The Galaxy S10+ includes a 4,100mAh battery, while the OnePlus 7T Pro packs in a 4,085mAh battery on the inside.

What about camera quality? Well, both of these phones will do the trick for 99% of users. Both of them are quite versatile when it comes to taking pictures and video, and the final product is really good as well.

These devices include both telephoto and ultrawide cameras on the back, in addition to the main sensor. Both phones can provide really crips and well-balanced pictures during the day. The Galaxy S10+'s camera will provide a bit sharper images, though, at least in our experience.

The OnePlus 7T Pro can shoot better macro images, though. Thanks to some OnePlus' work on the 7T Pro's camera, that device can get much closer to the subject than the Galaxy S10+. So, if macro photography is your thing, the OnePlus 7T Pro is the device to get.

Ultrawide camera does a great job on both phones, and the same goes for video. The Galaxy S10+'s selfie camera was more impressive than the OnePlus 7T Pro's. It managed to produce better-balanced, and sharper images.

When the light goes away, both phones can provide more than decent images. Truth be said, they are not comparable to the Pixel 4 or the iPhone 11 in that regard, but they are both really good… especially if you utilize a separate dark mode. Overall, we'll give a slight advantage to the Galaxy S10+.

Both the Galaxy S10+ and OnePlus 7T Pro include stereo speakers. Speakers on both devices are quite loud, and well-balanced. Minimum distortion is noticeable on high volumes, but nothing that regular users would notice or care about.

Dolby Atmos sound is present on both phones, while the Galaxy S10+'s speakers are tuned by AKG. Now, the Galaxy S10+ includes a 3.5mm headphone jack, while the OnePlus 7T Pro does not. That may be a huge advantage to some of you.

Speaking of which, when you plug in a decent pair of headphones in these two phones, either via a 3.5mm headphone jack or USB Type-C port, you'll get really crisp sound. The same goes for Bluetooth headphones as well. The Galaxy S10+ does have a slight advantage, though. Music sounded richer coming through the Galaxy S10+, a little bit, but still.

That brings us to the end of the Galaxy S10+ vs OnePlus 7T Pro comparison. There's no doubt that both of these phones are great. Both offer great design, cameras, performance, audio… and so on. There are some differences between them that needed to be mentioned, though.

Which one should you buy? Well, it all depends on what you're looking for in a device. If you prefer a stock-like UI look, smoother performance, display with a high refresh rate, and an overall better-looking device, the OnePlus 7T Pro may be a better choice. If you want slightly better cameras, and audio, the Galaxy S10+ is the way to go.