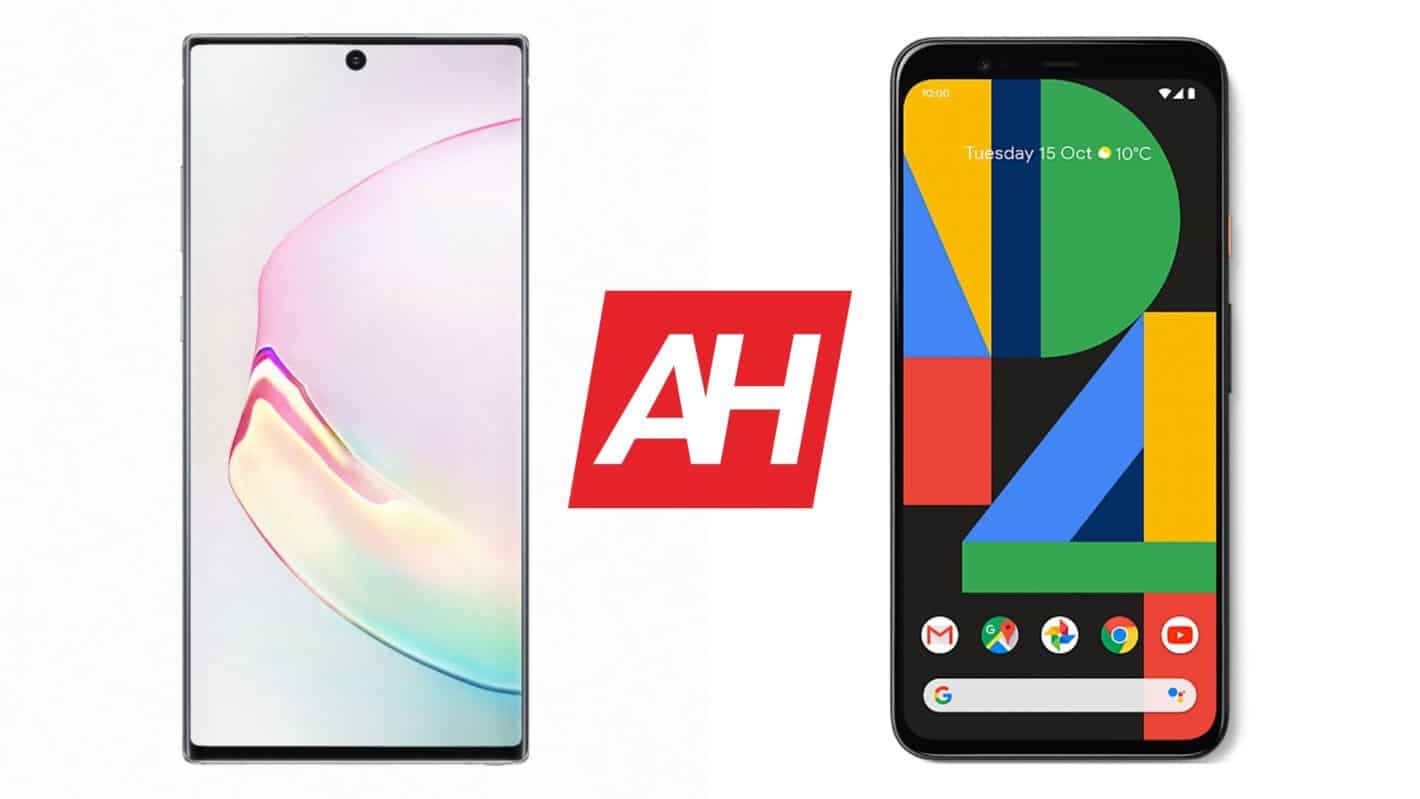 The Galaxy Note 10+ and Pixel 4 XL are both flagship smartphones, but they're quite different in comparison. That is what we're here to show you, and hopefully help you make the right purchasing decision.

Neither of these two phones is cheap, not at all. Both of these phones are quite pricey, though the Galaxy Note 10+ costs more than the Pixel 4 XL. In any case, let's compare the two devices, shall we, starting with their specs. Following that, we'll compare them across a number of categories, as per usual.

Both of these phones are made out of metal and glass. The implementation of those materials is considerably different, though. The Galaxy Note 10+ is considerably slippier than the Pixel 4 XL, and there are several reasons why that is

The Galaxy Note 10+ has considerably thinner bezels than the Pixel 4 XL, however. Its edges are also less sharp, contrary to its corners, which are less rounded than the ones on the Pixel 4 XL.

Both phones include their rear-cameras in the top-left corner, but the implementation is different. The Galaxy Note 10+'s cameras are vertically aligned, well, most of them. The Pixel 4 XL, on the other hand, comes with a square camera module which includes two cameras

All in all, we do believe the Galaxy Note 10+ won this round. The phone looks more appealing both from the front and back, while it also feels premium at the same time. It is considerably more slippery than the Pixel 4 XL, though, so keep that in mind.

The Pixel 4 XL does have one significant advantage over the Galaxy Note 10+, high refresh rate. The Pixel 4 XL includes a 90Hz display, which does not run at 90Hz all the time, though. It does not even run at 90Hz when it should, for all apps that support 90Hz displays, unless you force it via developer settings.

Both displays look truly great, though. They both offer great viewing angles, and punchy colors. Contrast is great on both, while the same goes for white balance. When it comes to sheer image reproduction, they're both amazing.

So, the Galaxy Note 10+ has better display protection, and HDR10+ content output. The Pixel 4 XL has a 90Hz refresh rate, even though it doesn't utilize it all the time. They pretty much balance out across the board with their features, and image reproduction… this one's a tie.

Both of these phones are truly great in the performance department. They both come with high-end specifications, and well-optimized software. Both phones are fueled by the Snapdragon 855, though the Galaxy Note 10+ comes with the Exynos 9820 in some regions.

The Pixel 4 XL does have lighter software, and it does seem to be a bit better optimized than what the Note 10 has to offer. So, what does that mean in real-life usage? Well, you can't go wrong with either one of these devices.

In day-to-day usage, they both do a great job. Switching between apps, loading apps, surfing the web… and so on, it's great. The same goes for games, in fact. They both can handle pretty much everything you throw at them, and there's no significant difference in terms of speed.

The Galaxy Note 10+ is more future proof in terms of hardware, while the Pixel 4 XL has an edge on the software side. We cannot decide between the two, both are speed demons, and quite frankly you can't go wrong with either one.

The Galaxy Note 10+ managed to get us way past 6 hours of screen-on-time, and it still had over 20-percent charge left at that point. That was our consistent battery life during the review period. The Pixel 4 XL managed to get past the 6-hour mark as well, but the battery died right about that time. Its battery life was not consistent either, at one point it was a struggle getting over the 5-hour mark.

All in all, the Galaxy Note 10+ is the winner here. Not only can this phone last longer on a single charge, but it also offers faster charging, and reverse wireless charging as well.

The Samsung Galaxy Note 10+ is equipped with four rear cameras. The Pixel 4 XL, on the other hand, comes with two. The Galaxy Note 10+ may include more cameras, but that does not necessarily mean that it's a better camera smartphone.

Samsung did not really make many changes here compared to the Galaxy S10 series. It used the same sensors here, and the Galaxy Note 10+ is one of the best camera smartphones out there. It cannot compare to the Pixel 4 XL, though.

The Google Pixel 4 XL is able to take images with more detail and better dynamic range during the day. When it comes to low light conditions, it also shines. It can brighten up images considerably more than the Galaxy Note 10+, and also retain more detail in dark environments.

Both of these phones ship with stereo speakers, while neither of them includes a 3.5mm headphone jack. That being said, their speakers are really good. The Galaxy Note 10+s are tuned by AKG, while the phone also comes with Dolby Atmos sound.

Having that in mind, the Pixel 4 XL does not really offer worse audio experience in terms of its speakers, not at all. Both devices get really loud, and offer minimal distortion at high volumes. Both of them offer crisp sound through those speakers, having in mind these are smartphone speakers, of course.

The main speaker is located on the bottom of each of these devices. The secondary speaker sits above the display. Now, in terms of audio through headphones, the Galaxy Note 10+ does have an edge, but… barely.

No matter if you hook up a decent pair of headphones via the Type-C port, or use Bluetooth, you'll get really solid output. Both phones can provide really clean sound, both highs and lows are on point. Mids could be a bit better, but they're more than good enough.

Before we talk about who won this comparison, one more thing is worth noting here… the S Pen. The Galaxy Note 10+ features an S Pen stylus, which we did not mention earlier, as there's nothing to compare it to on the Pixel 4 XL. If you like using a stylus, or you need it for business purposes, the Galaxy Note 10+ is an excellent choice. This stylus has many uses, and it can even serve you as a remote camera shutter, or a Bluetooth clicker for your presentations.

That brings us to the end of our Galaxy Note 10+ vs Pixel 4 XL comparison. Both of these phones are great, there's no way around it. It all depends on what you need in a phone. The Galaxy Note 10+ is technically the winner here, though, as it won in more categories than the Pixel 4 XL.

As already mentioned, though, both phones are great, and there's really not much to complain here. The Pixel 4 XL may be a better choice when it comes to cameras, while the Galaxy Note 10+ definitely looks sleeker, and offers better battery life.