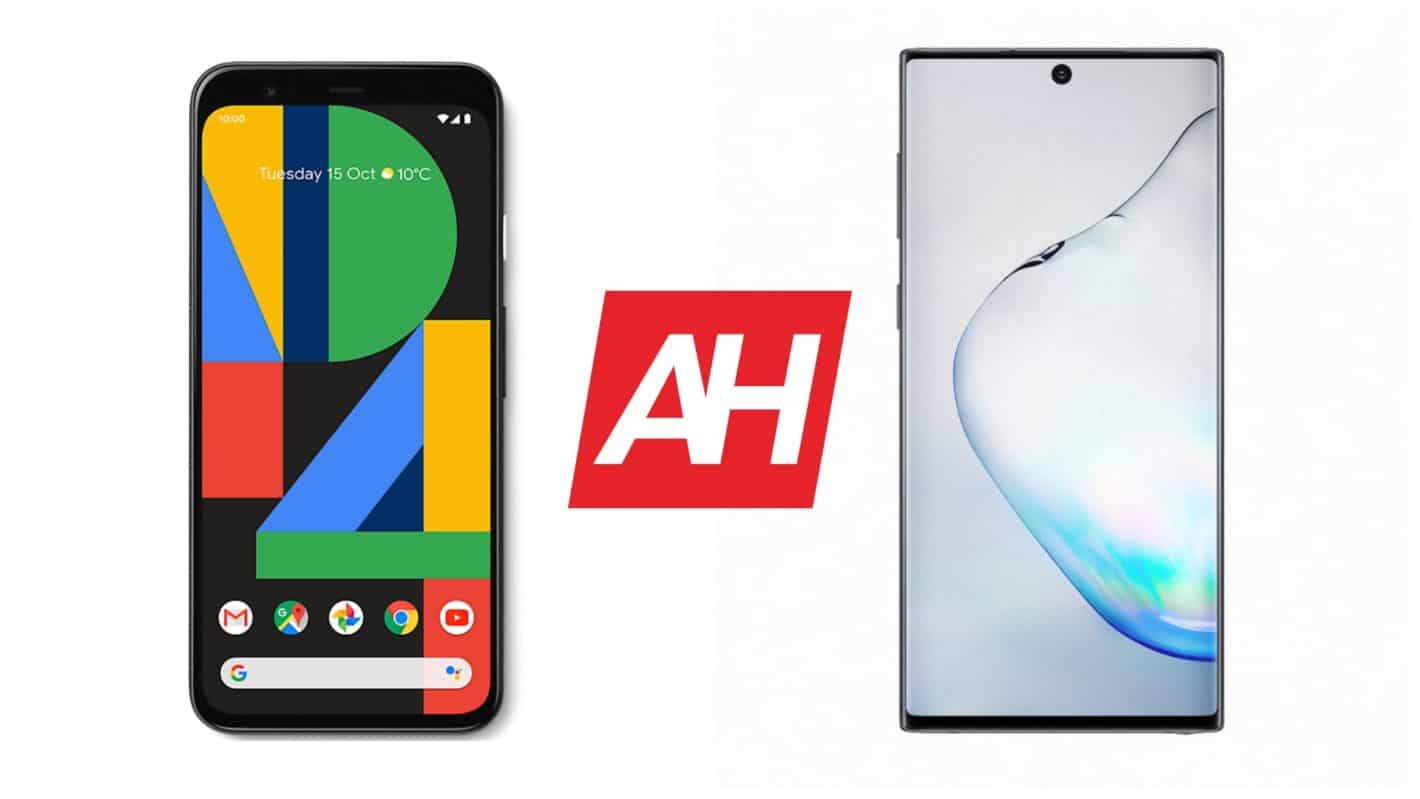 Both the Google Pixel 4 and Samsung Galaxy Note 10 are smaller flagship alternatives, and it's time to compare them. These two phones are fairly new, they've both arrived in the last couple of months.

Both of them are alternatives to their more expensive siblings, the Pixel 4 and Galaxy Note 10+. That being said, both of these phones are fairly good, though they're considerably different at the same time.

If you're trying to decide which one to buy, we'll try and help you decide, by comparing the two phones. The Pixel 4 vs Galaxy Note 10 comparison will take place across a number of categories, as per usual. At the end of it all, we'll see which phone won in most of those categories. Let the comparison begin.

The only similarity when it comes to the design of these two phones is in build materials. They are considerably different in every other way. From the sheer aesthetic perspective, we'll go with the Galaxy Note 10 on this one, it simply looks better. The Pixel 4's design looks a bit outdated, even though it's smaller and less slippery, so if that's a factor for you, consider it.

All in all, both of these panels are great. They offer great viewing angles, colors are punchy, contrast is great… we basically have no complaints when it comes to image reproduction. The Pixel 4 does have one big advantage, though, its refresh rate.

Once you start using a 90Hz refresh rate on a phone, it's hard to go back. Even though Google's software shenanigans are preventing this display from working at 90Hz for all apps (you can alter this in developer settings), it's still a better choice in our opinion.

Both of these devices are flagship-grade offerings from their respective manufacturers. Both include top-of-the-line specifications, though those specs are a bit different, as is the included software.

That is not something you'll notice in its performance, though. The Pixel 4 flies through everything you throw at it, same as the Galaxy Note 10. Google's software is lighter than Samsung's, so that helps as well.

One more thing to consider in terms of performance is that display, as everything feels smoother on a high refresh rate display, as long as the hardware and software are powerful enough. Truth be said, we cannot really decide on the winner here.

Both of these phones work extremely well, the Pixel 4 has a high refresh rate and lighter software, while the Galaxy Note 10 comes with more RAM and has UFS 3.0 flash storage. Not that specs themselves mean much, but it all balances out in terms of sheer performance, at least in this case.

When it comes to battery life, the Google Pixel 4 is probably the least impressive flagship in the market at the moment, at least as far as high-profile brands are concerned. The phone's battery life is simply disappointing.

It's disappointing even if you're not using that 90Hz display, and why wouldn't you. With a slightly more intense usage, the phone dies around the 3-hour screen-on time mark, which is simply not enough for modern standards.

The Galaxy Note 10 does much better in those same conditions. Chances are you'll be able to cross the 5-6-hour mark on this phone without a problem, even with more intensive usage. It's not the best smartphone when it comes to battery life, but it's miles ahead of the Pixel 4.

The Pixel 4's 2,800mAh battery simply cannot put up with a lot of usage. Luckily for the Galaxy Note 10 users, Samsung included a 3,500mAh unit in the phone. Both devices support fast wired charging, and also wireless charging.

The Samsung Galaxy Note 10 is the winner here, easy. Not only can it last longer on a single charge, much longer, but it's superior in terms of charging as well.

The Google Pixel 4 comes with two cameras on the back, a main camera, and a telephoto one. The Galaxy Note 10 has those two, and it adds an ultra-wide camera as well. Google really missed the mark on this one, as most people expected and wanted an ultra-wide shooter.

When it comes to results, the Pixel 4 wins in most situations. The device is capable of offering more details in pictures in all lighting conditions, pretty much. The Galaxy Note 10 does win from time to time, but the Pixel 4 does that more often.

Both devices offer great dynamic range, and colors as well. Both phones do like to process images quite a bit, which is somewhat noticeable, but that's not a bad thing in the vast majority of shots.

The Pixel 4 really stands out in low light. The Galaxy Note 10 is quite capable in low light conditions, but nowhere near the Pixel 4. The device allows for far more light to enter an image, and it also retains considerably more detail than the Galaxy Note 10 in such conditions. It also does a better job balancing such shots. The Pixel 4's low light images will look unrealistic more often than not, but they'll also look great at the same time.

The Pixel 4 also offers better results when it comes to the front-facing camera. That camera can also provide more detail in images, and the results look better overall. The Galaxy Note 10 does have an edge in video recording, as it offers 4K recording at 60fps, and the results are really good.

In the audio department, both devices are quite good. Both phones offer stereo speakers, and those speakers are placed in similar parts of the phone as well. The main one sits on the bottom, while the secondary sits above the display on both devices.

The Galaxy Note 10's speakers are tuned by AKG, and Dolby Atmos sound is also a part of the package. That is not the case with the Pixel 4. Is that noticeable? Well, in terms of speakers, no, not really. You really have to nitpick in order to give the Galaxy Note 10 an advantage in that regard. Both speakers sound great, they're very loud, with minimal distortion at high volumes. They're crisp, and well-balanced.

The difference is noticeable when you plug in a solid pair of headphones, though. Speaking of which, neither of the two phones include a 3.5mm headphone jack. Therefore, you'll have to use a dongle, or a Bluetooth connection, it's up to you. In any case, audio through headphones is better on the Galaxy Note 10. It is not only a bit louder, but it's crisper. The lows and the highs are better, more pronounced. Due to that fact, we'll give this one to the Galaxy Note 10.

The Pixel 4 does have a considerable advantage in the camera department, especially if you like shooting pictures in low-lit conditions. The phone also wins in the display category, if you ask us.

Which one should you choose? Well, that's up to you, it all depends on what you need in a smartphone. Overall, we do believe the Galaxy Note 10 to be the better choice, due to the Pixel 4's incredibly poor battery life, and some other aspects we've mentioned in this comparison. The Pixel 4 is still a great phone, though.