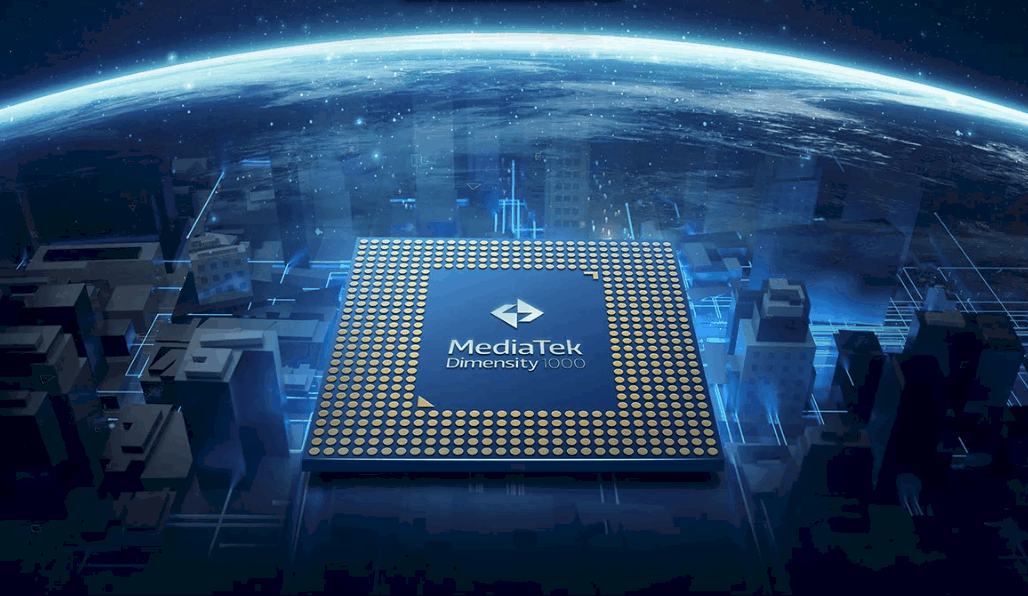 MediaTek first announced its plans for a 5G SoC at Computex 2019 in May. The company revealed that it’ll be based on the 7-nanometer FinFET process, and will incorporate the Cortex-A77 CPU and the Mali-G77 GPU. The chipset is now official, with MediaTek claiming that the first Dimensity powered devices will arrive on the market in Q1 2020. Huawei’s Kirin 990 is the only other mobile SoC to come with an integrated 5G modem.

The MediaTek Dimensity 1000 features an octa-core (4+4) CPU, with four ARM Cortex-A77 cores clocked at 2.6 GHz and four power-efficient Cortex-A55 cores clocked at 2.0GHz. Interestingly, MediaTek has chosen not to have any medium core on Dimensity 1000, unlike its rivals Huawei, Samsung, and Qualcomm who use triple CPU core configuration. Huawei and Samsung both have a 2+2+4 CPU core configuration in their latest Kirin 990 and Exynos 990 SoCs respectively. Qualcomm, on the other hand, has a 1+3+4 configuration in both Snapdragon 855 and Snapdragon 855 Plus.

ARM’s Mali-G77 GPU handles the graphics on MediaTek’s new chipset. The same GPU can also be found on Samsung’s Exynos 990. However, Samsung’s solution features 11 cores, while MediaTek is using only nine GPU cores. We’ll need to wait for benchmarks to find out how the two chipsets differ in GPU performance, though. To recall, the Kirin 990 has the older Mali-G76 GPU.

For imaging, the Dimensity 1000 has a five-core image signal processor (ISP) combined with MediaTek’s Imagiq+ technology. This world’s first processor features a unique “3 big plus 2 small design.” The chipset can handle 80-megapixel camera sensors at 24fps, and supports up to five cameras, including a 32+16-megapixel dual camera setup. Unfortunately, this chipset doesn’t support 108-megapixel cameras. As for videography, there’s the world’s first multi-frame video HDR capability, and 4K/60fps recording. There’s no 8K video recording yet.

Othe specifications include support for Wi-Fi 6, Bluetooth 5.1, AV1 codec, 2K+ screens at 90Hz, and FHD+ screens at 120Hz, as well as support for 2-channel LPDDR4X memory with a maximum of up to 16GB RAM.

It is worth mentioning here that support for mmWave 5G is absent on this chipset. For the uninitiated, mmWave uses airwaves of much higher frequency to deliver faster data speeds. However, it gets easily blocked by obstacles such as walls, thus offering limited coverage in open spaces only.

Last but not least, MediaTek’s 5G chipset is the world’s first to support dual-SIM 5G connectivity. This is a handy addition at a time when 5G coverage is in its early stages. You can have two 5G networks on one device and switch between them as per network strength.

MediaTek claims its solution delivers twice the speed of Qualcomm’s Snapdragon 855 and X5o modem pairing. Its 5G capacity coverage is also said to be 30-percent wider. And thanks to the integrated 5G modem, the Dimensity 1000 uses 42-percent less power than Qualcomm’s offering. Further, it occupies less space, making way for other features like a bigger battery or larger camera sensors.

However, Qualcomm’s offering is around since early this year, while MediaTek’s Dimensity 1000 will only start making it into devices next year. We’ll need to wait for Qualcomm’s next 5G chipset solution for a better comparison.

The Dimensity 1000 also marks MediaTek’s return to the flagship SoC market after nearly three years. So it’ll need to perform really well to take on the better-established competitors. It’ll be interesting to see if the MediaTek Dimensity 1000 is as good in practice as it appears on paper.