Skip to content
Advertisement
Trusted By Millions
Independent, Expert Android News You Can Trust, Since 2010
Publishing More Android Than Anyone Else
2
Today
113
This Week
559
This Month
5689
This Year
115693
All Time
Advertisement Huawei’s brand new smart speaker has appeared on Weibo (Chinese social media network), the Huawei Sound X. As you can see, some pamphlets surfaced, showing the speaker itself, along with some of its specs / features.

This speaker will be made out of metal, and it looks like a small pod. It actually looks somewhat similar to the Apple HomePod, in terms of the general shape, at least.

The Huawei Sound X smart speaker will include 512GB of RAM, and a quad-core SoC

The device will be equipped with a quad-core processor, and will include 512MB of RAM. On top of that, it will include 8GB of internal storage, and have a built-in microphone.

A physical key for muting will be included on the speaker as well, and the same goes for volume controls. An extra multi-function button will be a part of the package as well.

What good would a smart speaker be, if not a good speaker in general. Well, this speaker will include 60W double subwoofer, and 360-degree surround sound. A virtual 5.1 home theatre sound effect will also be included.

Those of you who care about it, the HiLink smart home control will also be available, in case you’re using such a setup. Bluetooth 5.0 will be enabled on this speaker, and the same goes for both 2.4GHz and 5GHz WiFi.

This speaker will probably launch on November 25

This pamphlet does not reveal when will the Huawei Sound X smart speaker launch, but we have a really good idea. It will probably arrive on November 25.

Why November 25? Well, that is when Huawei will announce the Huawei MatePad, its new tablet. Knowing Huawei, that will not be the only announcement of the day, which is why we think the Sound X will also be introduced.

Huawei probably does not want to host a separate event for the introduction of this smart speaker. That is not something companies do, they usually just announce it along with a higher-profile product.

So, you can expect both the Huawei MatePad tablet and Sound X smart speaker to make an appearance on November 25 in China.

Some additional info regarding this smart speaker may surface in the coming days, but what surfaced today is more than enough to familiarize us with the product. 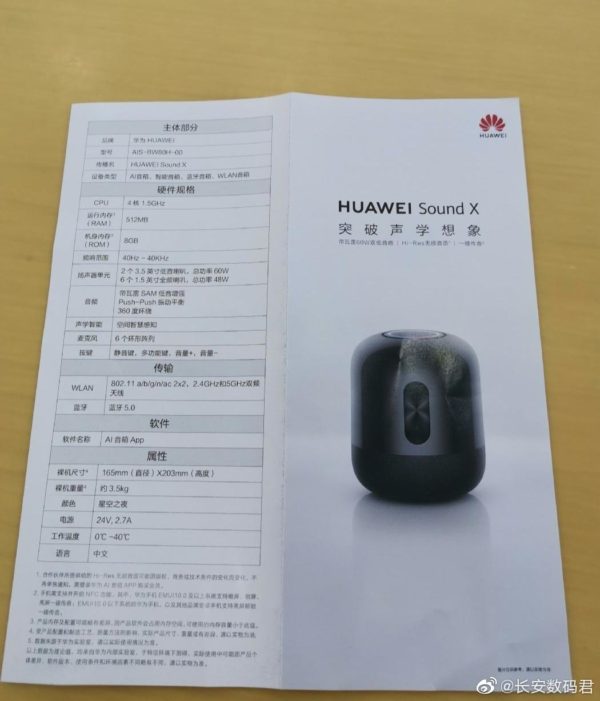