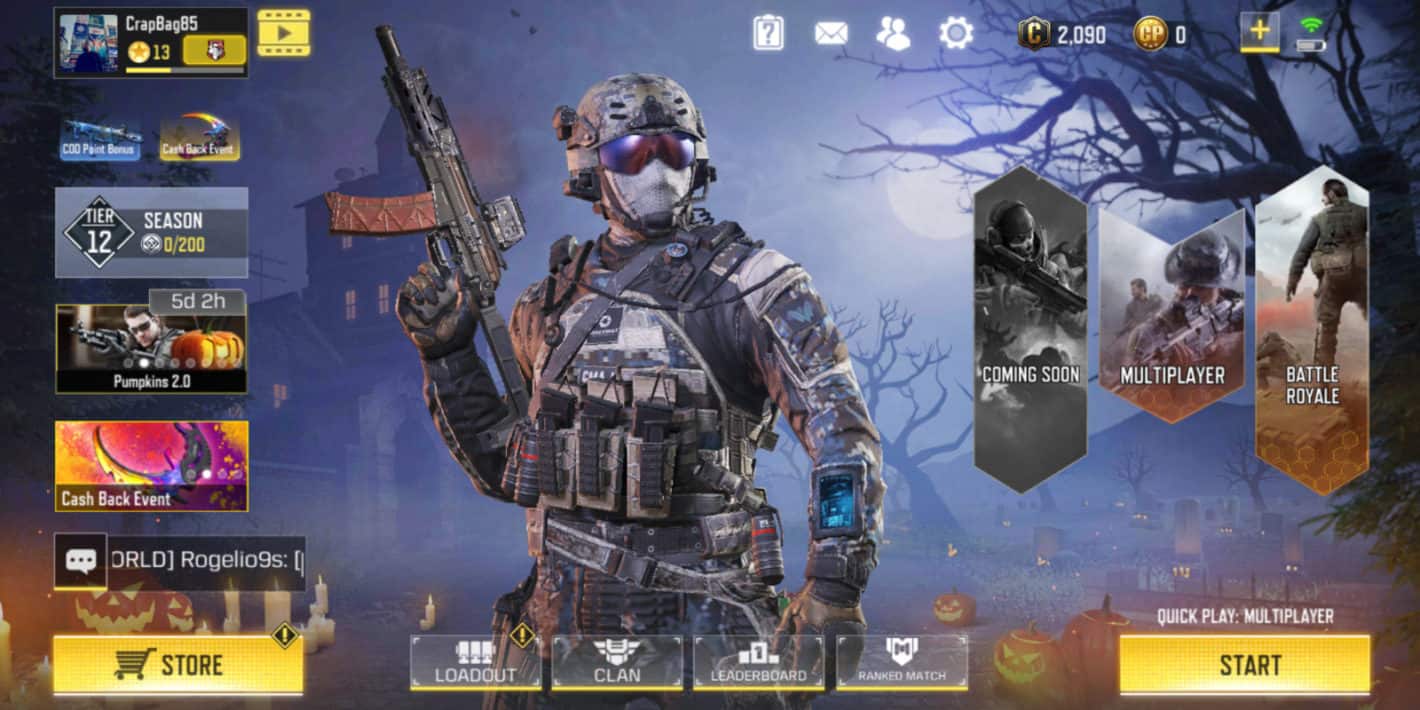 Joining a clan in Call of Duty games is by no means a required thing. It is however recommended. This includes Call of Duty Mobile, the game that officially launched globally under Tencent in October.

Clans have been a feature in Call of Duty Mobile since launch. If you’ve been playing regularly and aren’t sure how to join a clan though, perhaps this guide can help.

We’ve laid everything out in an easy to follow manner, step by step, so you can join up. We’ll cover how to create a clan as well, and list some of the different clan options you have.

Where do you access the clan page in Call of Duty Mobile?

There’s no direct clan menu within the game that you can jump to at the press of a single button. It doesn’t take a whole lot of effort to get to it though.

To access the clan menu, you first have to find and enter your profile page. This is where you’ll find the clan options as well as various other details about your player account. 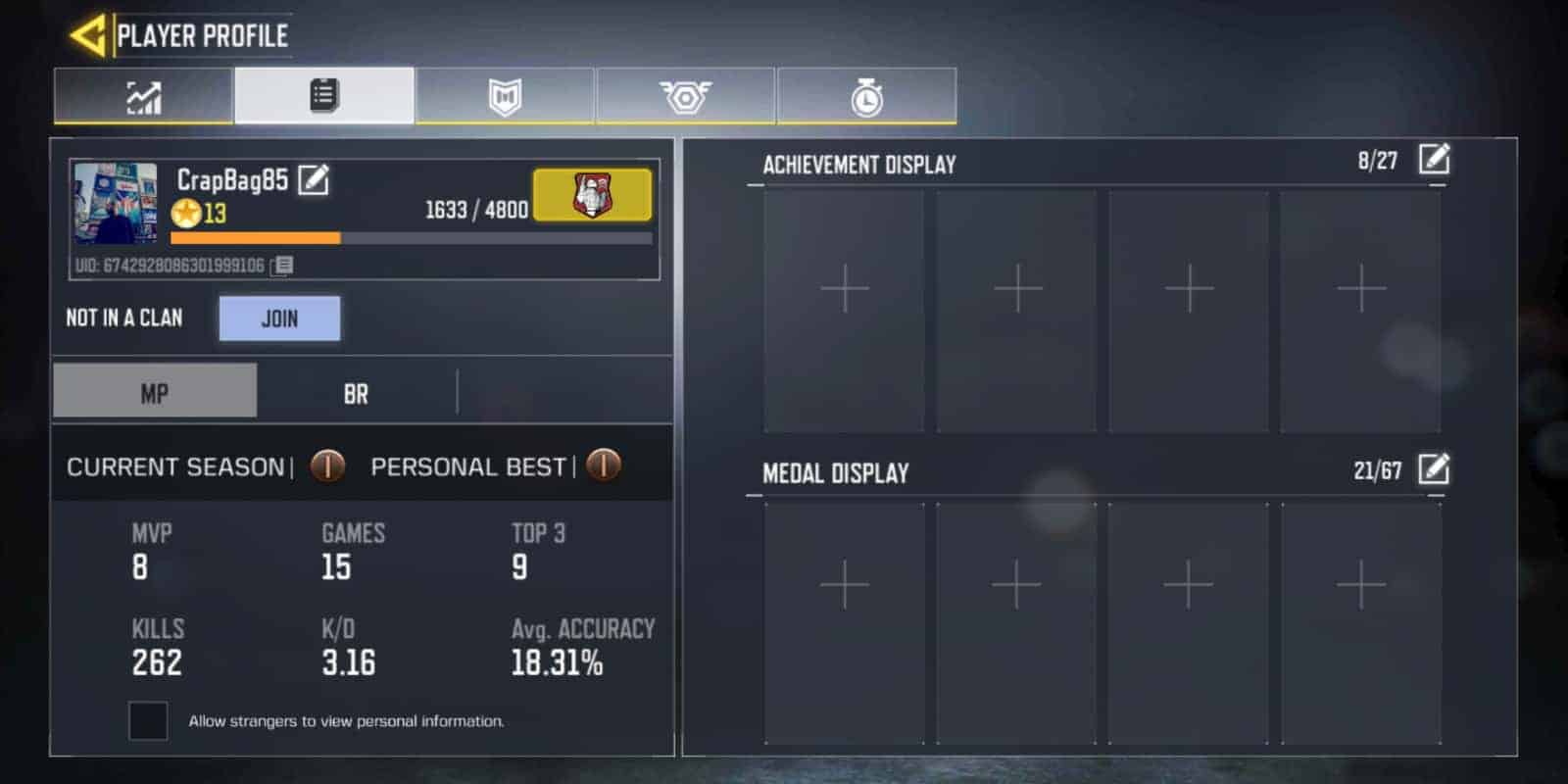 For example, you have player level rewards, your in-depth player profile, achievements, medals, and match history. This is all in addition to the Call of Duty Mobile clan page.

Clans don’t have their own tab. Rather, you access them from the player profile tab. On this tab, you will see your player name, and right under it your clan details. If you’re not in a clan, it will be listed as such. And, right next to that is a “join” button.

Tap the join button to see the different clan lists and options.

Sort the clan lists to help make finding one easier

On the clan page there are a few different customization options for you. You will start by seeing the large list of clans that takes up most of the screen.

Above that list, are options for how to sort through the different clans you can join. These are split up in two different drop down menus.

The first menu lets you sort by friends first or level first options. If you have friends in Call of Duty Mobile, then it stands to reason that you may want to join their clan. 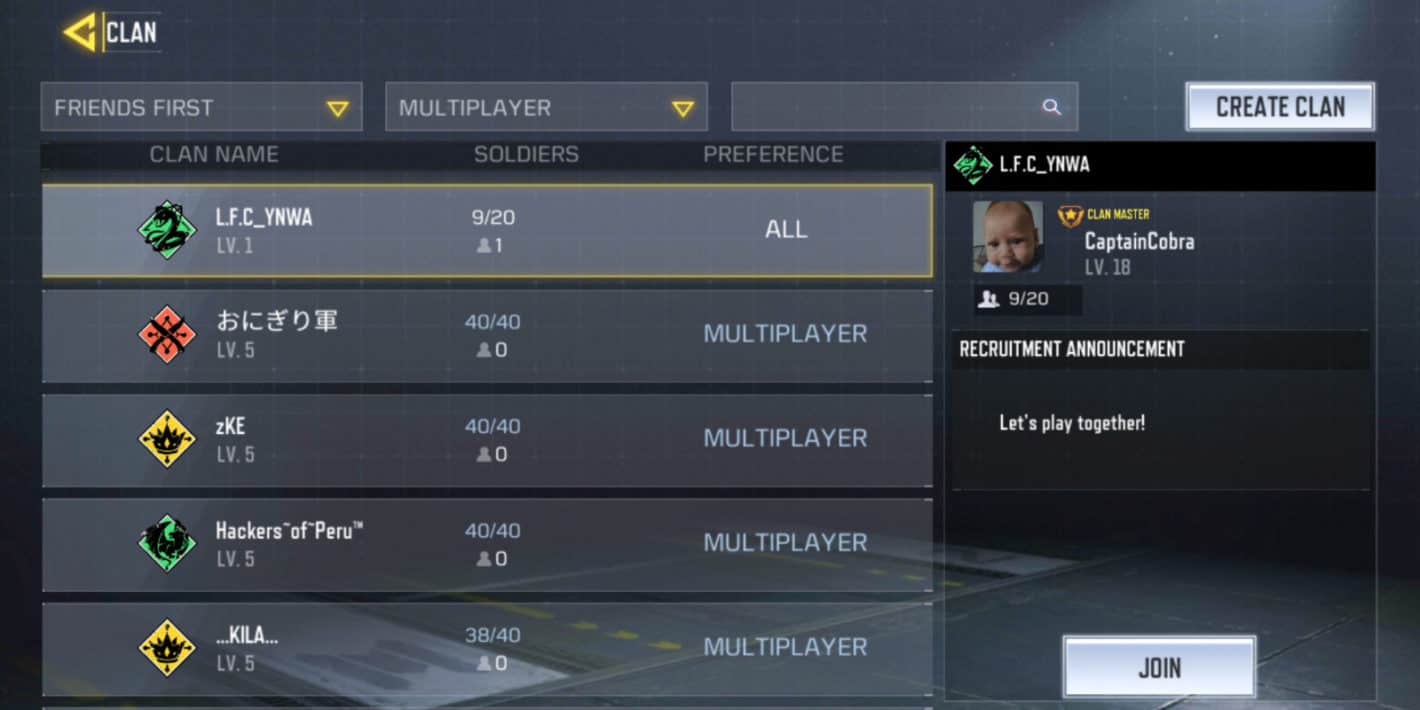 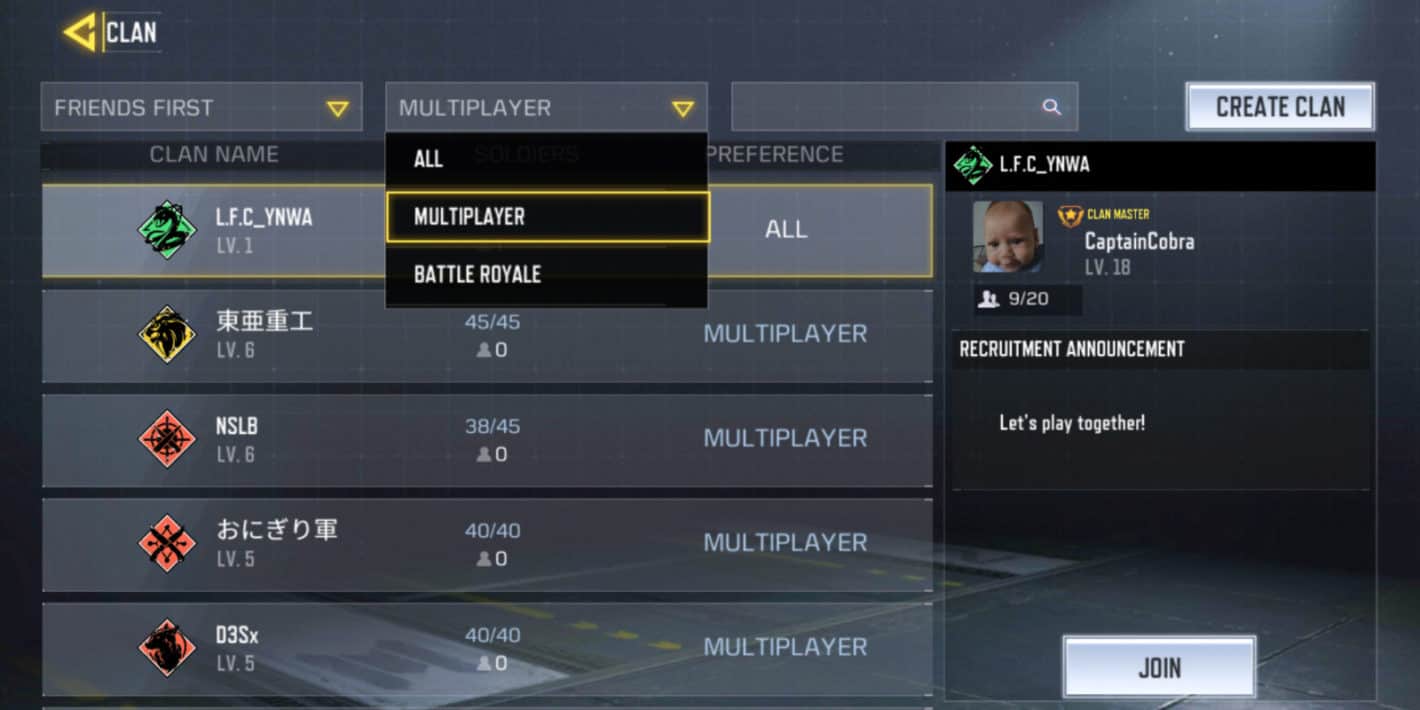 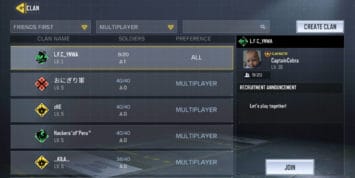 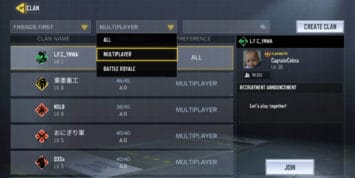 Sorting by friends first is how you would find them more easily. If you sort by level first, then you’ll see clans with the highest level at the top. Then it will descend to lower level clans as you scroll.

You can also sort clans by the type of game modes they play in. This sorting option is defaulted to “all” but you can sort by only Multiplayer or only Battle Royale. If you play only one of those modes, select which one so you only see clans who participate in that same mode.

You can also search for clans if you know the clan name and you don’t want to scroll through so many options. When you’ve found a clan you like, simply look to the right of the screen to see a summary of details about the highlighted clan, and tap the join button in the bottom right corner.

You can create clans from the clan page

If you don’t care to join a clan and would rather create one yourself, you can do that too. Creating a clan is also done from the clan page, naturally.

To create a clan, tap on the “create clan” button in the top right corner of the screen on the clan page.

Here, you will find the different options you have for creating a clan, including level requirements, a clan name, a clan emblem, and more. 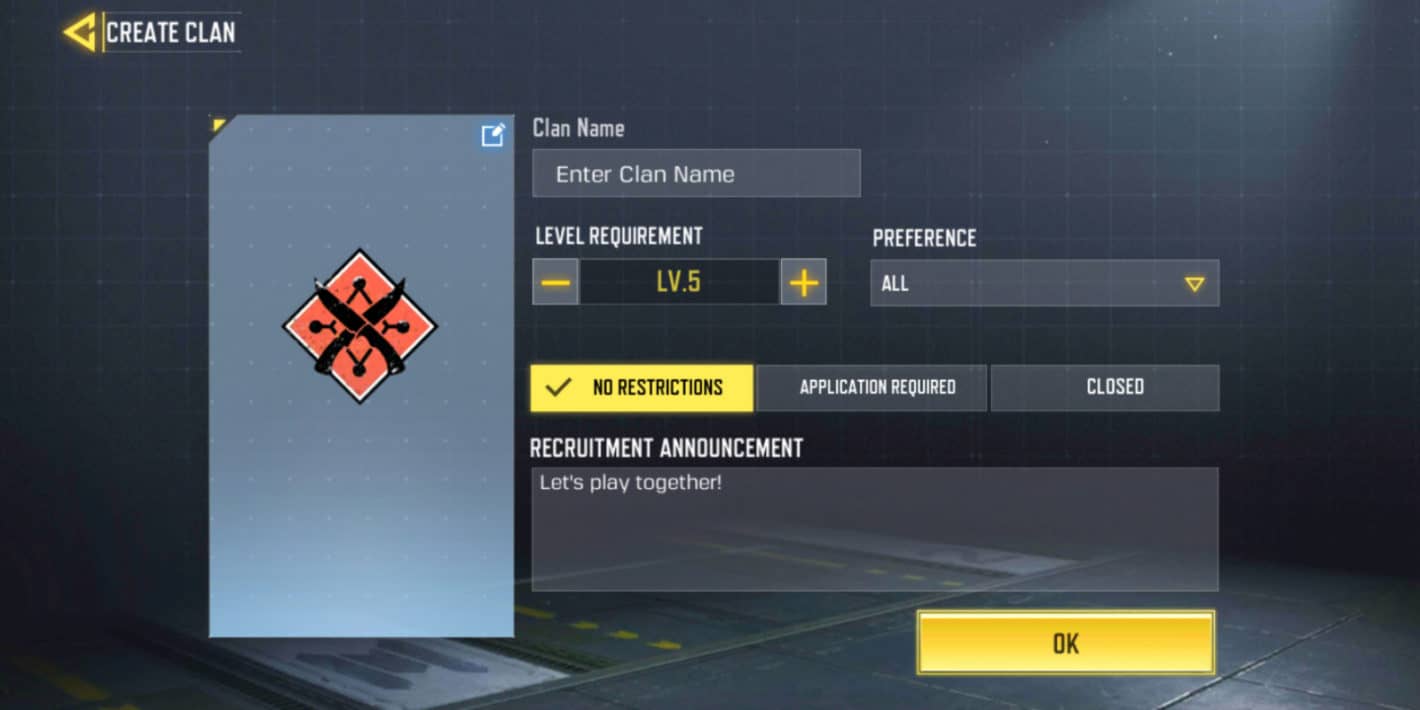 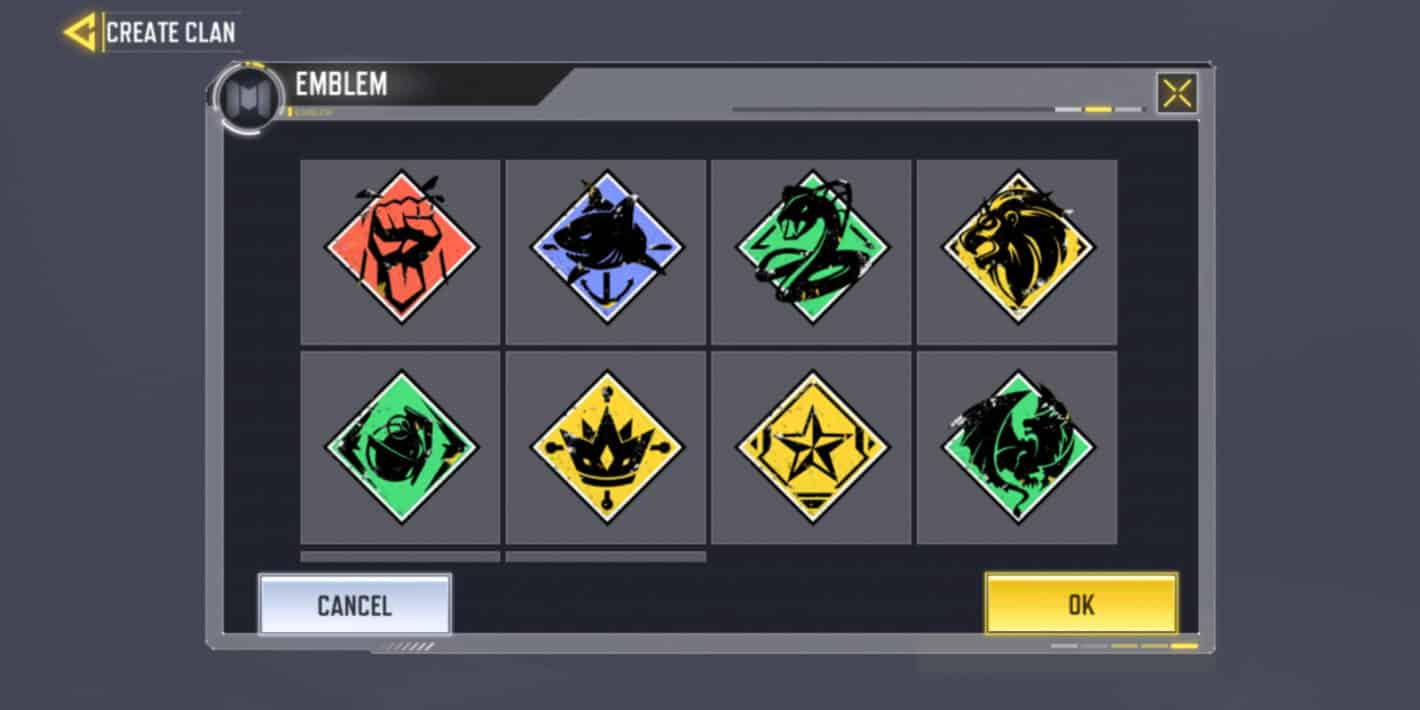 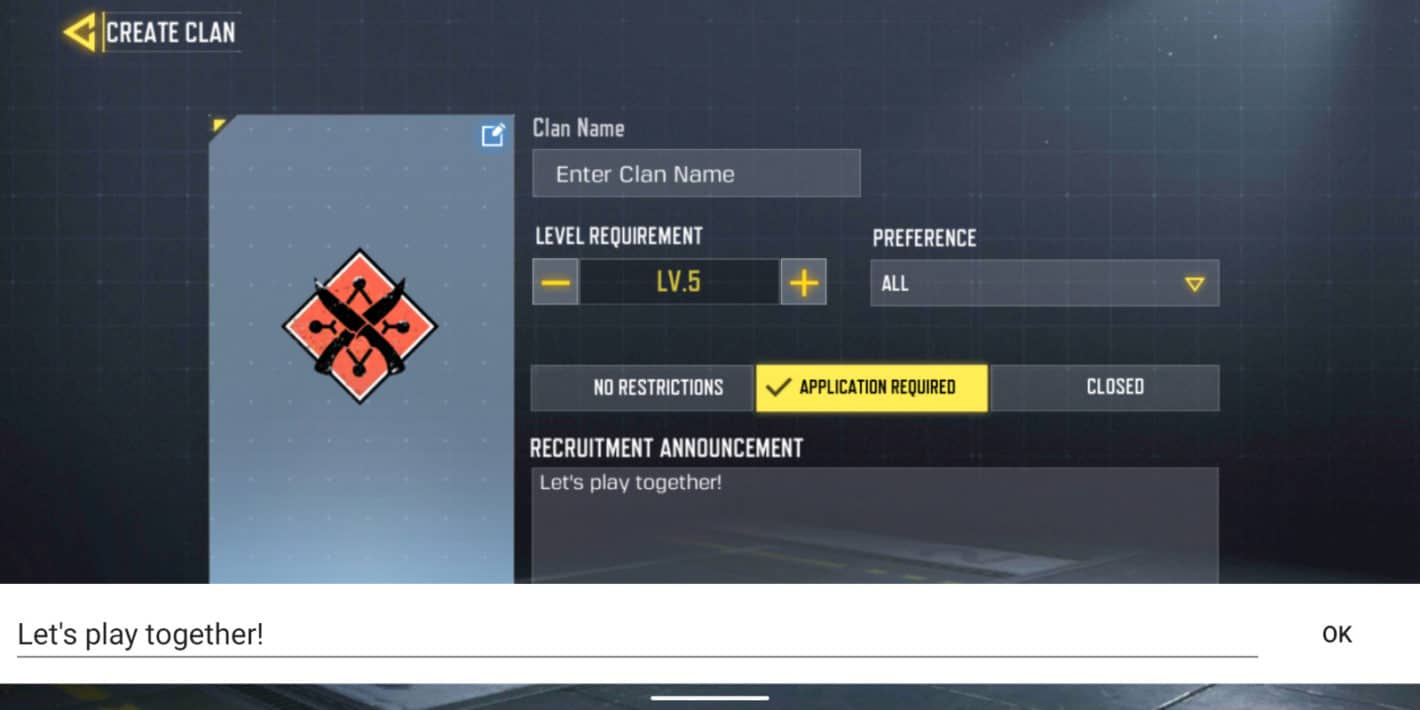 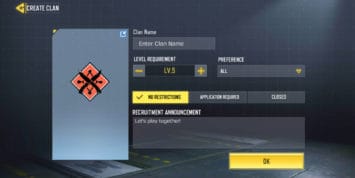 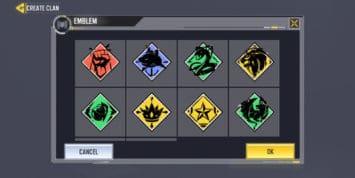 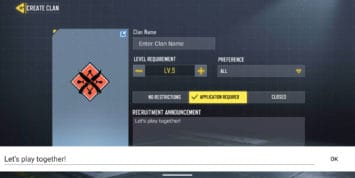 Clan level is defaulted to level 5, but you can set the requirement for much higher if you wish. There’s also a preferences option, which lets you list the clan as either All, Multiplayer, or Battle Royale. This tells anyone looking to join what kinds of game modes you play.

You have a couple other restrictions you can set up as well. For example, you can leave your clan open so anyone can join it, or you set it to application required. This option is as it sounds. People apply and you can accept or deny their requests to join.

There is also an option to set your clan up as a closed clan if you only want people you know in it. Lastly, you can type out a recruitment announcement, which is a short message that players will see in the clan list under your clan’s summary details. This can help set your clan up to make a good first impression.