Sometimes when looking for the perfect gift, you’re looking for something in a specific price range. Whether that’s because you’re doing Christmas shopping on a budget, or doing a Secret Santa, it still limits what you can get. We have listed the best gifts under $50, under $100 and under $250 though. So no matter your budget, there’s something here for everyone.

These are all gifts that are under $50, normally. Some might be much lower though, throughout the holiday season of course. You’re going to find everything under the sun. From Bluetooth trackers, to set-top boxes and everything in between. 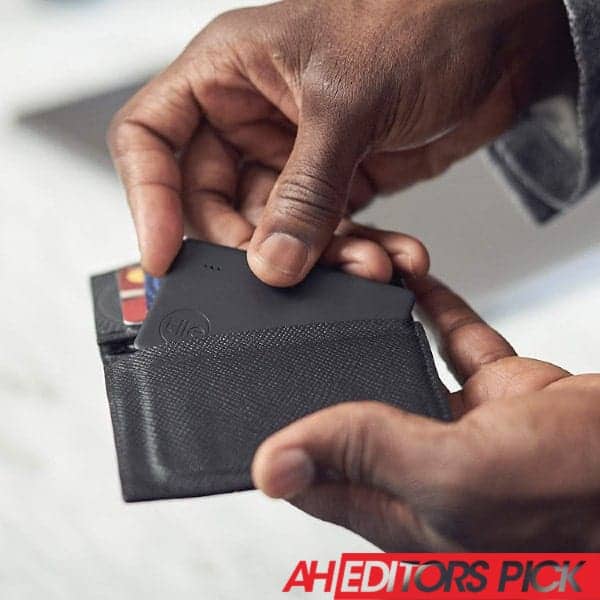 The Tile Slim is the smallest and cheapest Tile tracker available, and it is also the newest.

As the name states, the Tile Slim is a pretty slim tracker that can be put into a wallet or into a small pocket of your backpack, and it won’t take up much space. It’s about the size of a credit card, but a bit thicker. This means that it won’t take up a whole lot of space in your wallet.

With Tile Slim, you can easily have your wallet ring when you’ve lost it, using your smartphone. This is very useful, especially if you lose your smartphone quite often. You can also use it to ring your phone if you’ve lost that, so it’s good that you can use it both ways. 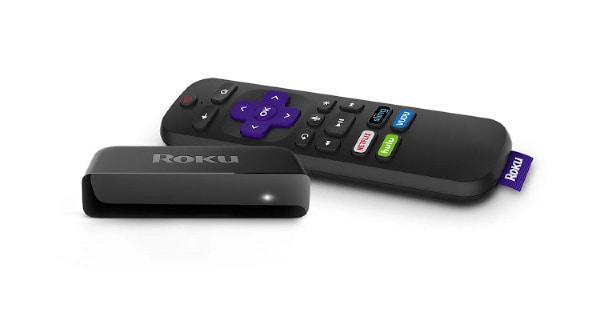 Roku has many sticks and dongles that are priced under $50, but the Premiere+ is the best.

Roku’s platform does support all of the major apps that you’d expect it too. That includes Netflix, Hulu, YouTube, Amazon Prime Video, Google Play Movies & TV, HBO Go and much more. There are over half a million movies and TV shows available on the Roku Premiere+

It’s a fairly small dongle, which comes with a 3M strip that you can use to attach it to the back of your TV or to the bottom of it, and really put it out of sight. 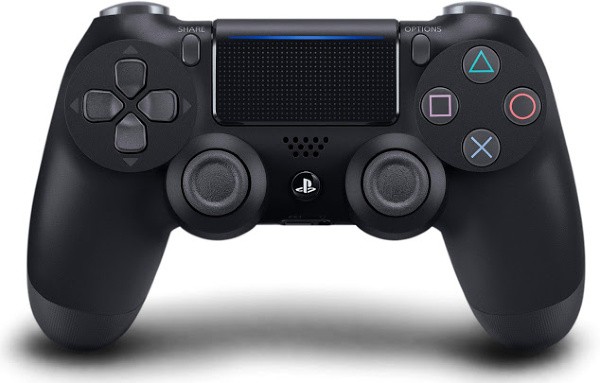 You can never go wrong picking up another controller for the PlayStation 4. Especially since the DualShock 4 controllers are just so damn good.

The DualShock 4 will also work with Android smartphones and the Remote Play app. The haptics and vibration on the DualShock 4 are really impressive, and will probably scare you if you leave it on a table and it vibrates.

It’s still a wireless controller, but since this controller came out quite a few years ago, it does still charge via micro USB. Hopefully that will change with the PlayStation 5 controllers. That’s not a big deal, but worth pointing out since most smartphones are now using USB-C.

You can really get some pretty cool Christmas gifts for under $100. Including smart speakers, bookshelf speakers, a freaking microwave and so much more. Whoever is on your list this year, is bound to get something good, without you breaking the bank. Now that’s a win/win. 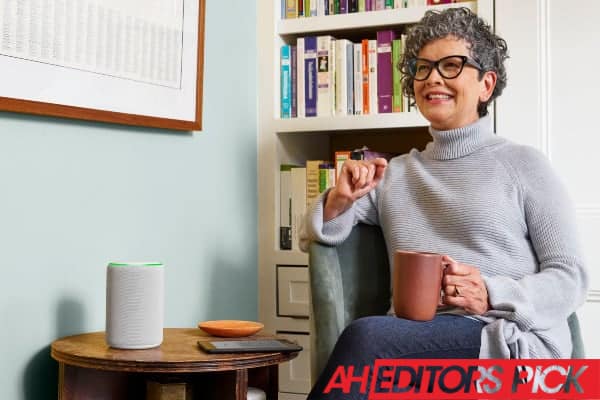 Third-generation Echo has the Amazon Alexa smart assistant built-in, as you might expect. Allowing you to do things like controlling your smart home products, asking Alexa about the weather and so much more.

It is also a smart speaker, so you can play music, podcasts, audiobooks and much more. Most of the audio services that you would expect are available on Alexa. This includes Spotify, Amazon Music Unlimited, Pandora, Audible and much more. 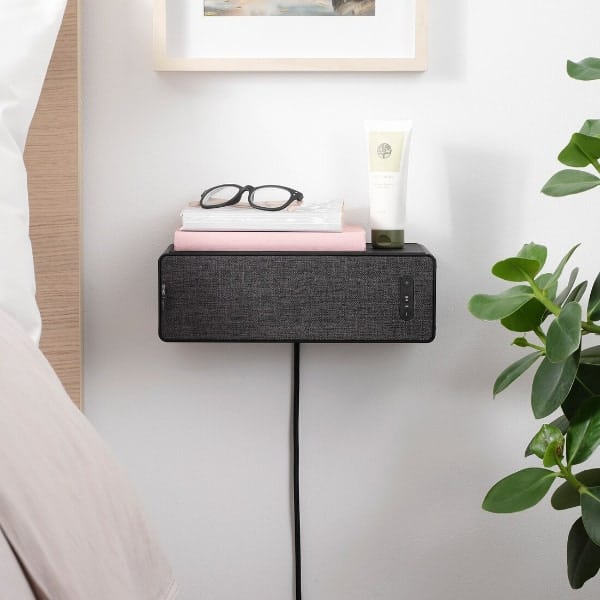 The Sonos Symfonisk is the best bookshelf speaker available, at basically any price point. But it’s a really great value at under $100.

This is a bookshelf speaker, so you can mount it on the wall like an actual shelf, or use it as a book end on a bookshelf, which is cool. It’s still a Sonos speaker though, so you’re going to get a pretty good sound experience out of this one. That includes some really good bass and some crisp mids and highs. It’s a similar experience to the Sonos One or Sonos One SL speakers.

Not to mention the fact that this does still work with the other Sonos speakers out there, for some great multi-room audio. This all works over WiFi, so you can use it for a surround sound system in your living room or man cave too. 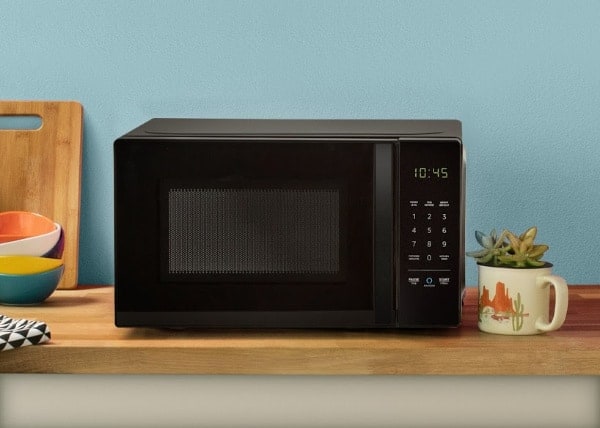 This microwave isn’t just any microwave. It’s a smart microwave that has support for Amazon Alexa. Allowing you to use Alexa to find out how long you should defrost some steak. Or ask Alexa how much time is left on the microwave.

Unfortunately, you can’t ask Alexa to start cooking your food for you. Which kind of makes sense, you still need to physically put the food in the microwave.

This is a 0.7-cubic foot microwave, which is a pretty decent sized microwave, especially for around $60. Normally these microwaves are closer to $100. So getting this for that price, along with Alexa being included, makes this a great gift. 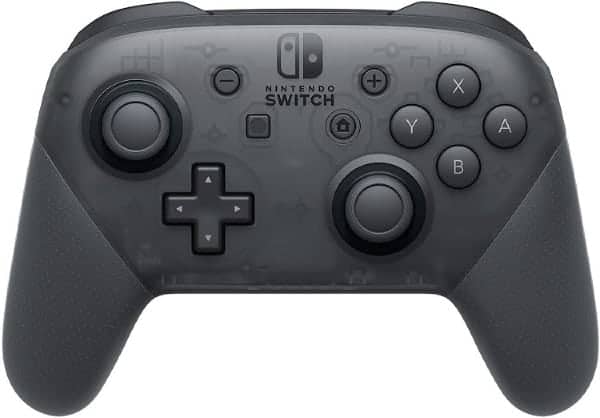 Picking up a wireless controller for the Switch is always a good idea. Allowing you to play with the Switch docked, and not having to worry about using the tiny JoyCons.

The Nintendo Switch Pro Controller is a really great controller to grab. It’s much larger than the JoyCon, making it a lot more comfortable to use. It has all of the same features of the JoyCons, but with a lot more battery life. We’re talking about a good 40 hours of battery life on this controller. That’s a whole lot of game time.

It is wireless and like the Switch, it charges via USB-C. So you can charge it with the same cable that you use for the Switch – or as your smartphone. 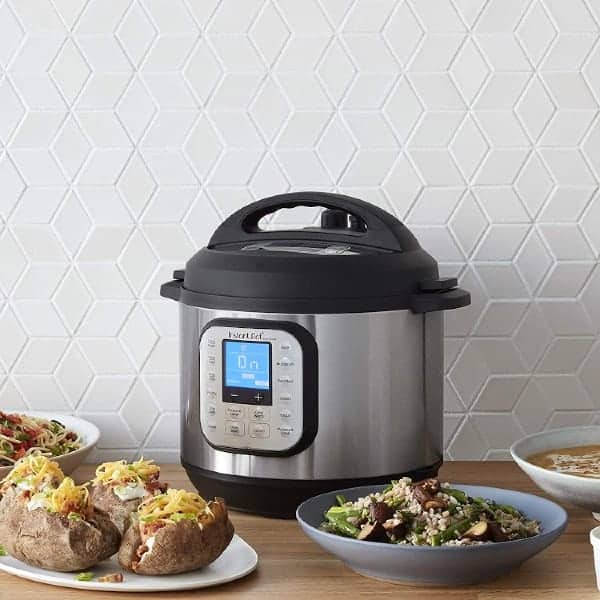 The Instant Pot Duo Nova is a great gift for those that are always in the kitchen cooking. This one is able to replace seven appliances in your kitchen, all for under $100.

Instant Pot Duo Nova can act as a pressure cooker, slow cooker, rice cooker, steamer, sauté pan, yogurt maker and warmer. That is pretty impressive. And now, it can also cook about 70-percent faster, compared to the previous model. Which makes this a really great pick up. You can make just about anything you can imagine in an Instant Pot, which is really cool.

From Ribs to Chicken, to Smoothies and even a Cheesecake, the Instant Pot Duo Nova can do it all.

With $250 to spend on a Christmas gift, there’s definitely some really cool gifts that you can pick up this holiday season. From a temperature-controlled coffee mug, to a video doorbell and just about everything in between. Whoever is still on your list this season, they’ll love any of these gifts listed below. 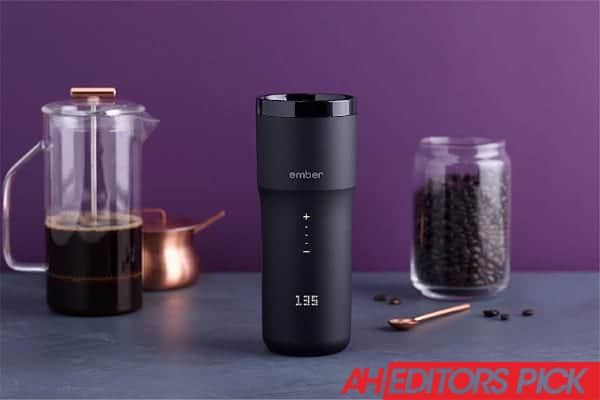 This is the new (and improved) Ember Travel Mug. It’s the second generation, which is now a much better mug. But it still does what you’d expect, it’ll keep your beverage warm all day long.

It has a three-hour battery to keep your coffee warm, and at the perfect temperature. But it does charge on the included coaster, which you can use to keep it hot all day. It’s a really good looking coaster too, so it’s good to keep on your desk. You can choose the exact temperature that you want your coffee to stay at, and there are LEDs on the mug to keep you aware.

You can control the temperature from the buttons on the mug, or use the smartphone app. Because of course there is an app available. 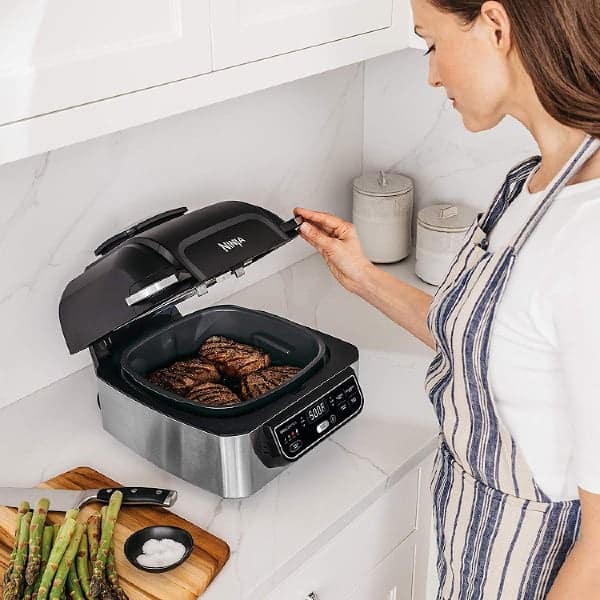 This is much more than just an air fryer though, the Ninja Foodi 5-in-1 is also an indoor grill. This is going to make for a great gift, especially with it getting cold now – and harder to really grill outside.

You can air fry, roast, bake, dehydrate and of course grill with this one.

This is going to be amazing for those that do love to cook. And as an air fryer, you’re going to be able to make some really tasty french fries that are going to be a whole lot more healthy than frying them in a pot full of oil. 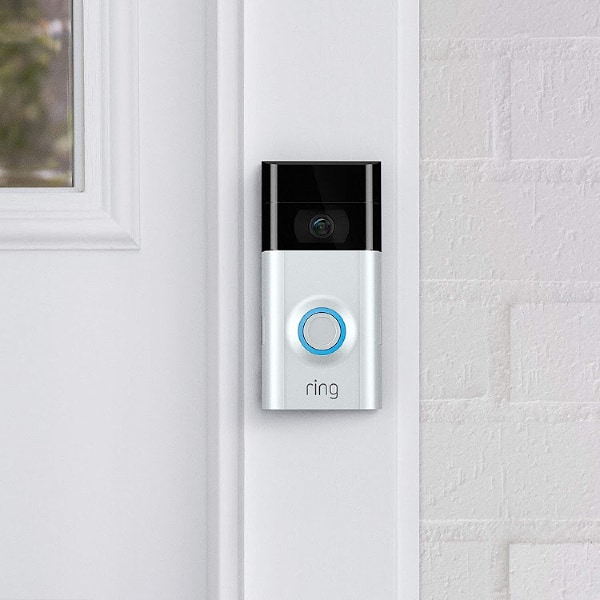 The Ring Video Doorbell 2 is pretty great because you can see who is at the door – even if they didn’t ring the doorbell.

Ring will let you know when someone is at the door, via a notification on your phone, or by ringing it on your Echo devices. Which is pretty awesome. And on the Echo Show or Fire TV, you can bring up the feed from the wide-angle camera.

There’s also two-way audio available on the Ring Video Doorbell 2, so you can speak to whoever is at the door too. Finally, it does record whenever it sees movement or people. So if something happens outside your home, you will know. This is a good way to protect your Amazon packages. 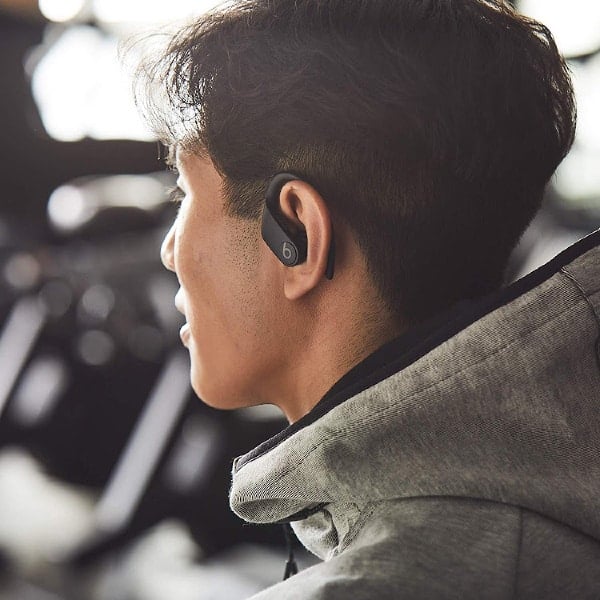 The Powerbeats Pro is the latest pair of truly wireless headphones to hit the market, and this time from Beats. These offer some really good battery life, since they are much larger, coming in with around nine hours on a charge. That’s more than double what most other headphones offer.

If you know Beats, then you know that these headphones are going to be pretty bass-heavy. So if you know someone that listens to a lot of Hip Hop or R&B, then this is going to sound really good. You can adjust the EQ though, and drop some of that bass, which is nice for those that do want a bit less bass.

The Beats Powerbeats Pro do come in a number of colors, though the matte black does look really great. 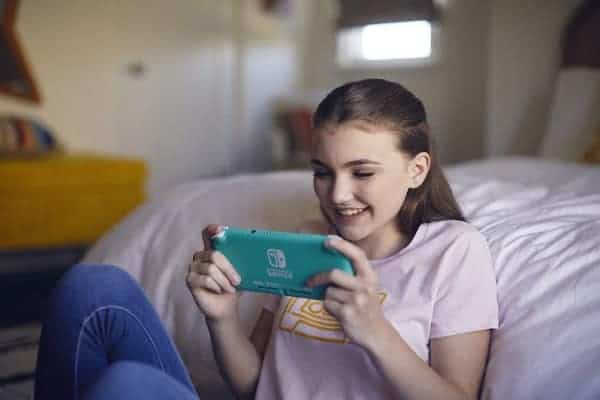 Getting a gaming console for under $250 is pretty incredible. And there really isn’t any other competition other than the Nintendo Switch Lite for this price point.

The Switch Lite is well, just that, a cheaper Switch. There are really three main differences from the main Switch. The Switch Lite does not have removable JoyCons, it does not dock for playing on the big screen, and finally, it comes in some bright colors. Like Turquoise, yellow and gray.

Otherwise, you can play all of the same games that you’ve come to expect from the Switch. Like the Legend of Zelda: Breathe of the Wild, Rocket League and so much more. Any kid would be ecstatic to see the Nintendo Switch Lite under the Christmas tree come December 25.