Everything you need to know before signing up to Disney+

Disney+ launched in the U.S. on November 12, 2019 with a low price and a number of great features.

The service immediately garnered massive attention and even encountered some technical issues on the first day. A sign of how many were trying to access the service more so than any actual issues with the service.

Needless to say, Disney+ is already proving to be an extremely popular streaming service.

For those thinking about signing up, here’s some of the basics you might want to know, including the price, what devices you can watch on, and the best Disney+ features to know about beforehand.

How much is Disney+?

That’s a good question. How much Disney+ is depends on whether you just want Disney+ or not? If that sounds a little confusing then don’t worry, it’s not.

It’s just a matter of deciding whether you want to bundle Disney+ with other services, such as ESPN+ and Hulu.

No thanks, I’m flying (Han) solo

If you are just after a standard and standalone Disney+ subscription, then the price is $6.99 in the U.S.

For that price, you gain unlimited access to all the content, as well as all the best Disney+ features.

Unlike other services, Disney+ does not offer any upgrade routes or complicated plan options.

When going the standalone subscription route, there’s only the one plan, the Disney+ plan.

Yes, subscribers in the U.S. have the option of bundling Disney+ with ESPN+ and Hulu.

This option not only allows you to get the best of all three services, but also saves you a few bucks along the way.

When bundled, all three services are billed at $12.99 per month. That’s the total for all three subscriptions. 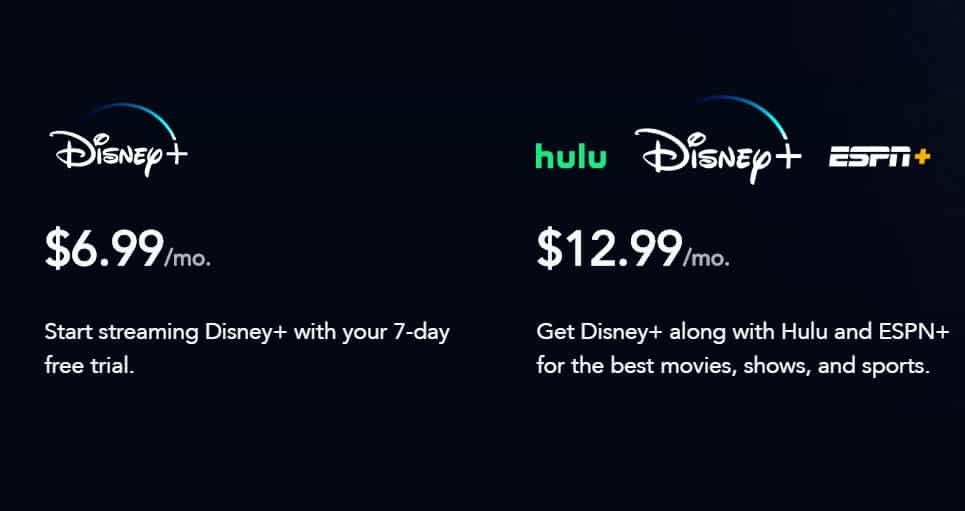 To be clear, this is not a combined bundle that’s accessible via the one app. All three services remain independent and almost as if you were subscribing to them all individually. For example, you’ll still need to download all three apps and log in to them individually.

It is only the price that’s bundled.

If you are already an existing Hulu subscriber then there’s no need to cancel your subscription to take advantage of the bundle.

You can find out more on what existing Hulu subscribers can do, here.

What devices can I watch Disney+ on?

Right out of the gate, Disney+ comes loaded with support for an impressive array of devices and platforms.

If you’re specifically interested in Android, then you are generally fine. Android phones and tablets are supported as long as they are running Android 5.0 at a minimum.

Disney does specify that streaming via a mobile browser is not available yet so you will have to stream via the Android app.

You can download the Android app for free from the Google Play Store.

For those wondering whether Disney forgot about Android TV (like most services tend to do at launch) then, no. Disney+ is already totally compatible with Android TV.

Whether you’re looking to access Disney+ via an Android TV box like the NVIDIA SHIELD TV or the Xiaomi Mi Box, or even any of the TVs with Android TV built-in, you can.

For everyone else, here’s the full list of currently confirmed Disney+ supported devices and platforms.

Disney+ features worth knowing about

Disney+ might be a cheap service, but the price is the only thing that’s cheap about it.

This is a service that comes loaded with features and quite a few extra benefits. Some of which, you would be expected to pay for on top of your main subscription.

Here’s a quick look at some of the best Disney+ features.

Yes, if there’s only one thing you should expect when singing up to a subscription service then it’s content. However, in this case, the content itself is a feature worth knowing about.

Disney hasn’t simply turned up with a few episodes and movies to tide people over while they slowly pad out the service’s catalog (hello Apple TV+, how you doing?). Instead, Disney has opened up the floodgates and not just to Disney-specific content either, but also popular franchises including Star Wars and Marvel.

In short, content is not a problem with the service. It wasn’t on launch day and it won’t be going forward.

The content is easily one of the best Disney+ features overall.

What hasn’t gotten enough attention yet is Disney’s approach to downloads.

However, both Hulu and Netflix currently impose various limitations on downloads.

Generally speaking, Disney+ will let you download as much content as your device can handle. It doesn’t care how much you save to watch offline.

So far, that’s unlimited downloads and kept for an unlimited time.

Adding to all of this, Disney+ will let you download content on up to 10 different devices at the same time.

While that is a limitation, it is still less limiting than what other services offer in this respect.

Another area where users can often run into issues is with simultaneous streams. This is particularly true for households with more than two family members who are all sharing the same subscription.

For example, the most common Netflix plan is the $12.99 “Standard” Plan. However, that only comes with the ability to stream on two different devices at the same time. To get four streams at the same time, you would have to pay $15.99 per month to Netflix for the “Premium” plan.

By default, and in spite of being considerably cheaper than even Netflix’s $9 “Basic” plan (with one stream at a time), Disney+ lets subscribers stream on four different devices at the same time.

The editor’s opinion on Disney+

It is clear here that Disney is trying to appease everyone with Disney+ and that’s not a bad thing.

It is as if Disney has looked at the subscription market and said, “Right, where are the pain points?” Once they were identified as price, confusing plans, selection of content, downloads, simultaneous streams, etc, Disney decided to simply do away with them all.

By removing all of those hurdles, Disney has created a product that already appears to be very difficult to criticize. Even if you’re not particularity a fan of Disney or its classics, then you’re still likely to find some content offered that interests you.

If you’re already a Hulu and ESPN+ subscriber, then opting out of Disney+ becomes even harder. For example, the price you are already paying for ESPN+ and Hulu (either ad-supported or ad-free) makes the cost of Disney+ negligible. Adding Disney+ to your existing ESPN+ and Hulu subscriptions will cost you $2 more per month. For that minimal increase, you’ll also benefit from less so-called “subscriber fatigue” as you’ll only have to manage the one payment each month.

Of course, Disney is doing all of this, including making the service as accessible as possible, to benefit itself. Disney wants to ensure as many people sign up and stay signed up as possible.

However, the motives behind why Disney is doing this don’t matter. Even if it is a play, the results are the same – a service that’s cheap by current standards, feature-rich and available on almost every device and platform you can think of.

Think of it this way – even if you wanted to pay Disney more money than it is asking, you can’t. There’s nothing to upgrade, nothing to add on, nothing to buy. It is just one price for the one plan with everything Disney+ has to offer.

There’s not many subscription services around right now that are that transparent.

You can try Disney+ for free

If you are still undecided about Disney+ then you do have the option to try before you buy as Disney+ offers a seven-day free trial.

Similar to free trials in general, this one provides unlimited access to the service and all it has to offer.

You do have to provide payment details up front and you will need to remember to cancel before the free trial ends to avoid being billed.