The Samsung Galaxy Note 10 Lite has appeared on Geekbench, it seems. The device surfaced under the “SM-N770F” model number, and this is yet another indication that it may launch soon.

The phone managed to score 667 points in the single-core test, and 2,030 points in the multi-core benchmark. This listing also reveals that the phone will pack 6GB of RAM, and Android 10 as well.

On top of Android 10, the Galaxy Note 10 Lite will include Samsung’s One UI 2, of course. Thanks to this Geekbench benchmark, we do know that the Galaxy S10 Lite will be fueled by the Exynos 9810 SoC.

As a reminder, the Galaxy Note 10 and Note 10+ are both fueled by the Exynos 9820 in Europe and India. Those three devices ship with the Snapdragon 855 in the US and China.

That is pretty much all the information that Geekbench shared. The listing does not mention the ‘Galaxy Note 10 Lite’ name, but this model number is expected to carry that name.

If this info ends up being true, the S10 Lite will be more powerful than the Note 10 Lite

That is quite odd. If the Galaxy S10 Lite ends up sporting the Snapdragon 855, and the Galaxy Note 10 Lite the Exynos 9810… that would create quite a bit of difference between the devices.

Inclusion of the Snapdragon 855 in the Galaxy S10 Lite would bring the device on the same level as the Galaxy S10e, S10, and S10+, so its ‘Lite’ tag wouldn’t make much sense.

The alleged Galaxy S10 Lite also surfaced on the FCC about a week ago. The device appeared there with an SM-G770F model number. That is the same model number that surfaced on Geekbench last month.

If we had to guess, we’d say that both the S10 Lite and Note 10 Lite will arrive with the Exynos 9810. That won’t be the case, it seems, at least according to Geekbench. It remains to be seen what will happen. 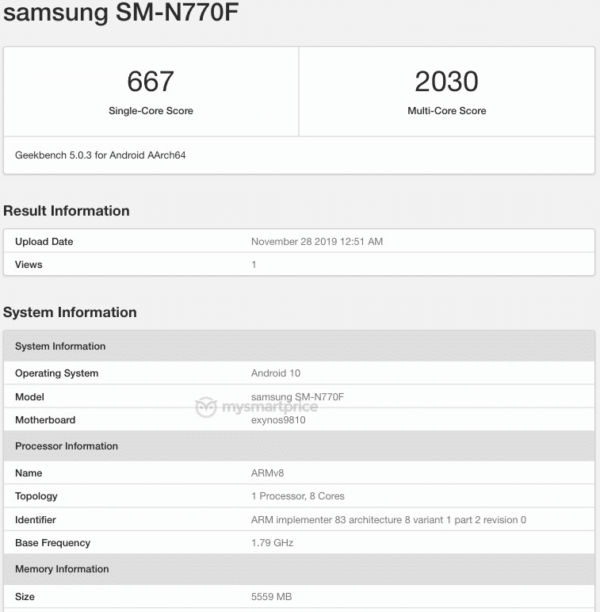