Google’s YouTube app received the dark mode feature a while back. The company released that feature with a manual switch in the app’s settings.

As it’s the same with a number of other apps out there, YouTube can now change themes based on your system settings. If your Android 10 phone is running with a system-wide dark mode, YouTube will use a dark theme as well.

On the flip side, if you switch to a light mode in the system settings, YouTube will do the same. You do have control over this in the Settings, still.

YouTube dark mode auto switch is easy to set up

Simply open YouTube app on your Android 10 phones, and tap on your profile picture in the top-right corner. From there, select “Settings”, and then “General”. You will see the “Appearance” option there.

Once you hit that option, you’ll be able to choose between “Light theme”, “Dark theme”, and “Use device theme” options. These options are pretty much self-explanatory.

Do note that this seems to be a server-side switch. Just make sure you have the latest version of YouTube installed on your phone, and wait for the feature to arrive.

We did that, and the option is still not available for us. It will probably arrive really soon, though. We’ve included a screenshot that proves the feature arrived (down below), though, provided by a Twitter user who shared the news.

Google had released the dark mode feature to quite a few of its apps. The dark theme is available to pretty much all major Google-made apps at this point.

In some instances, the feature is still limited to Android 10 users, but that will change soon as well. Google released the dark mode for Google Keep aka Keep Notes, YouTube, Snapseed, Chrome, Gmail, Google Play Store, and a number of other apps.

YouTube’s dark mode follows the general pattern for Google. The company doesn’t use a pure black background for its dark mode, instead, it opts for a dark gray one. It combines that background with various shades of gray and pure white colors.

If you’re not sure if you have the latest version of YouTube, check the Play Store. You can either navigate to your installed apps via the Play Store on your phone, or via the desktop. In any case, the link is included down below. 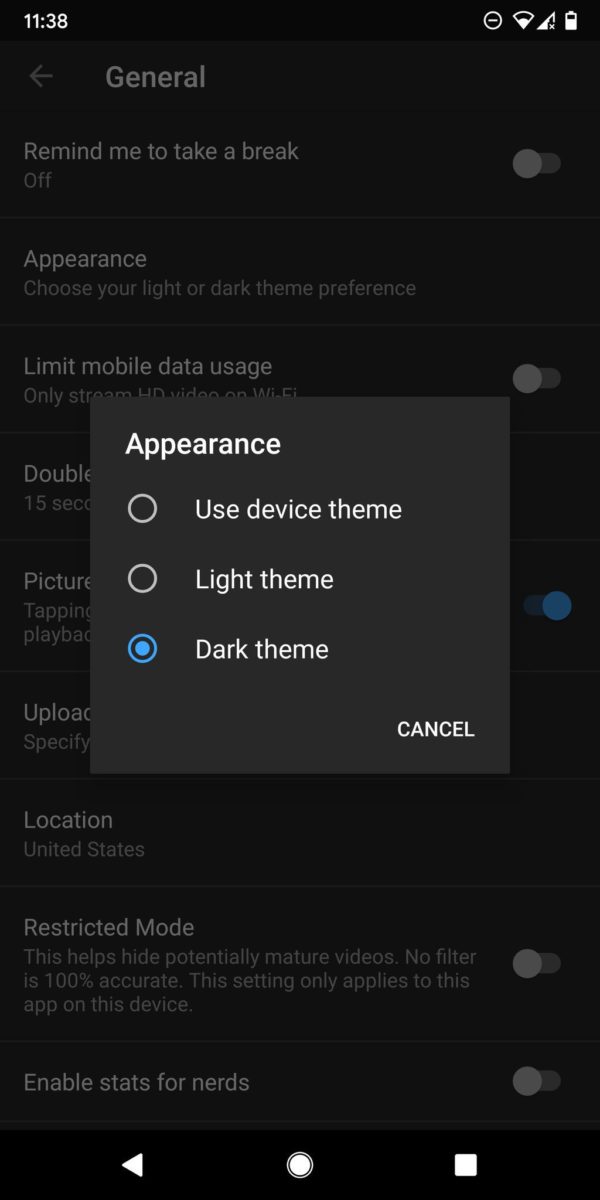