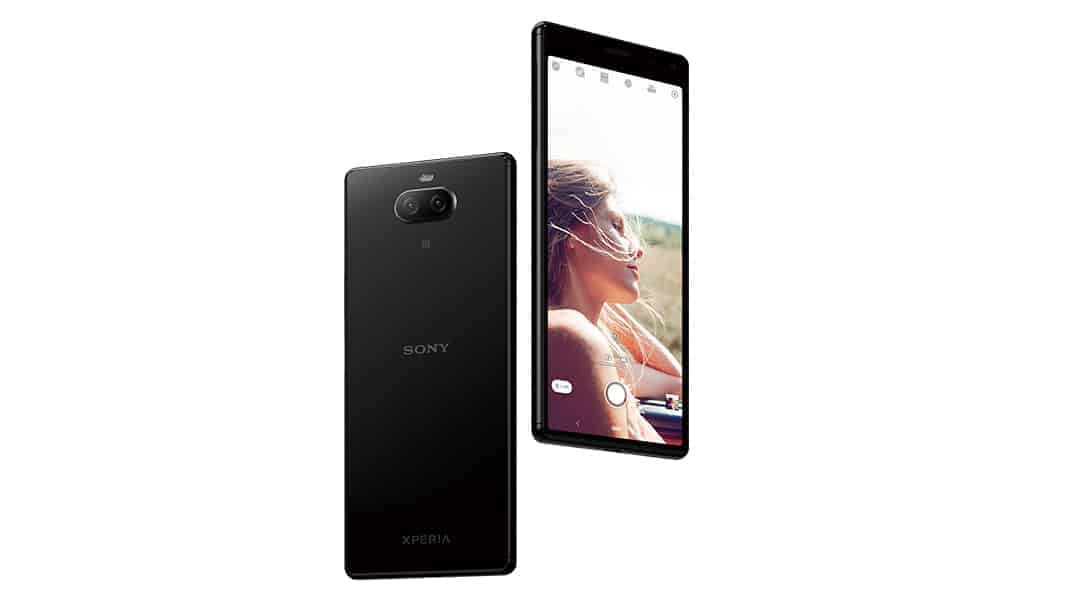 Sony Mobile has announced a brand new smartphone, the Xperia 8. This is a mid-range smartphone which got announced in Japan, but it will probably ship to other markets as well.

We’re not really sure what materials Sony used here. The phone’s frame is made out of metal, but we’re not sure if the back is glass or polycarbonate (plastic).

The phone does feature two cameras on the back. Those two cameras are horizontally-aligned, and a dual-LED flash is placed above them. The two cameras do protrude a bit.

That fingerprint scanner actually acts as the phone’s power / lock button as well, as there is no separate power / lock key, as on the Xperia 5.

You will notice that the Xperia 8 has a rather thick “forehead”. The bottom bezel is much thinner than the top one, and its side bezels are also not thick. Despite the fact it may look like the phone has two cameras above the display, it does not, there’s only one included there.

This handset actually comes with proper waterproofing. This phone is both waterproof (IPX5/8) and dustproof (IP6X), which is not a certification that is common when it comes to smartphones.

On top of the phone’s display, a sheet of Gorilla Glass 6 is placed. The phone is fueled by the Snapdragon 630 64-bit octa-core processor. This is one of Qualcomm’s mid-range processors. A 2,760mAh battery is also a part of this package. That battery is not removable, and it supports fast charging, even though the details have not been shared.

Android 9 Pie comes pre-installed on the phone, with Sony’s custom UI on top of it. 12-megapixel (f/1.8 aperture, EIS) and 8-megapixel (f/2.4 aperture, 2x optical zoom) cameras are placed on the back of the device.

The Xperia 8 comes in Black, Blue, Gray, and Orange color variants. The phone is priced at 54,000 yen ($505), and will go on sale in Japan later this month. Sony did not say whether it will become available in Europe and other regions, but it probably will.