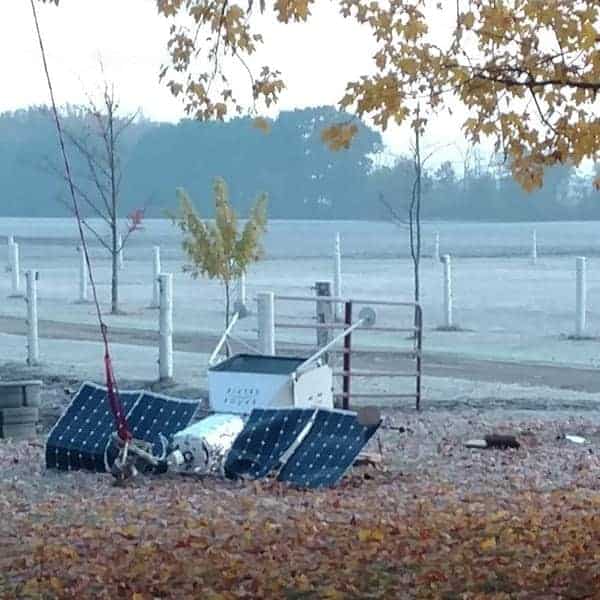 Samsung sent out a small satellite of sorts for a marketing stunt called “SpaceSelfie”, and the thing recently crash-landed on Nancy Mumby-Welke’s farm in rural Michigan. The newly earthbound parcel consisted of some outer solar panels, metal landing gear that appeared to have done its job, a balloon, and a central compartment that contained a Galaxy S10 5G and an array of cameras.

The stunt itself was aimed at the European market, kicking off with actress Cara Delevigne. The whole deal was for people to upload their selfie to a given website, then Samsung’s satellite would take a picture of the Galaxy S10 5G showing their selfie with the Earth as a backdrop.

Though the satellite’s main purpose was to market to Europe and was owned by Samsung Europe, it launched from Iowa. It is worth noting that the entire stunt was actually planned to end somewhat like this.

Samsung stated outright that the plan was to wait for proper weather conditions, then have the balloon land as gently as possible in a targeted rural area. The landing was gentle enough to preserve the contents of the balloon’s onboard box. A spokesperson said that the landing went mostly to plan, and apologized for any inconvenience the stunt caused.

According to Welke, she was with her husband, preparing to let horses out for the day, when she heard a loud crash and found the balloon outside. Since the balloon came down in an area used by horses, there may have been a risk of animal harm if the landing had happened any later.

She actually posted a video showing the balloon and its contents on Facebook, but has since removed the video, likely at Samsung’s behest. Judging by a still pulled from the video, the balloon probably didn’t come down in quite the condition that Samsung hoped for.

This is far from the first time that Samsung’s marketing department has done something big in the real world. Samsung’s past efforts in this area have mostly included things like letting sports fans attend events in VR, though most of its PR stunts have not historically ended with inconvenience to somebody not involved.

This is by far one of the most ambitious moves Samsung has made in real-world marketing. The quite literally out-there stunt checked a number of key boxes; it showed the company’s product in a positive light, it allowed fans to get involved, and it attempted to do something that’s outlandish or uncommonly seen.

Samsung’s word on the matter began and ended with a statement given to ABC News. The stunt essentially went according to plan, and managed to garner a decent number of participants before it all came crashing down.

Though crash-landing on a farm wasn’t exactly part of the plan, things went well enough that Samsung decided not to run any real damage control. For what it’s worth, there was no word on whether Welke got to keep the Galaxy S10 5G that was in the package. The flagship device is one of Samsung’s first to incorporate a dedicated 5G modem.