Samsung already has an advertising program in place for smart TVs. Samsung Ads, as the company says, uses "a proprietary data set no one else has, to deliver insights to marketers no one else can offer". The same device-oriented consumer advertising could be about to hit its Galaxy smartphones and tablets as well. Folks over at LetsGoDigital have dug out a European trademark for "Samsung Mobile Ads" which suggests this development.

The trademark application was submitted to European Union Intellectual Property Office (EUIPO) on October 1, 2019. Milan based Perani & Partners applied for the trademark on behalf of Samsung. The trademark is categorized as Class 9 and Class 35, which covers both smartphones and tablets, as well as advertising services.

By the looks of it, only wearables are saved of the so-called "interest-based advertisements" from Samsung. The company could well cover those tiny tech pieces too with ads in the future, though. After all, mobile advertising is a multi-billion-dollar market and Samsung will be looking to carve itself a share as big as possible.

For a second year running, Samsung Ads was the official sponsor of the annual "Advertising Week" held in New York last month. While the focus of the event is TV advertising, Samsung clearly sees opportunities in advertisements and would be looking to enter the market of mobile advertising soon.

Mobile advertising relies on user data harvesting. The harvested data is then analyzed and used to show "targeted ads". However, there's also a possibility of data misuse, evidenced by the Facebook–Cambridge Analytica data scandal last year.

Amid this privacy battle against data giants such as Facebook and Google, Samsung, the world's largest smartphone maker, looks all set to add to users' woes. And Samsung will probably be better placed than the aforementioned two giants in the race of mobile advertising.

There cannot be a better advertising space than a smartphone. A smartphone can put together a more unique profile of the user than Facebook or Google. And everywhere we go, a smartphone goes along. So advertisers would find smartphones the ideal medium for showing the most curated location-based or interest-based ads.

It's not clear when Samsung will officially launch the Samsung Mobile Ads program. But there's a strong possibility that Samsung Galaxy smartphones will soon start showing personalized ads. Of course, advertisers will be very happy with these developments, but the same cannot be said for consumers. Hopefully, the ads won't be too invasive in nature.

Samsung's advertising program for smart TVs does offer you the possibility to turn it off, though you need to delve into the terms and conditions menu of the TV. Whether such an option will be on offer on a phone remains to be seen. 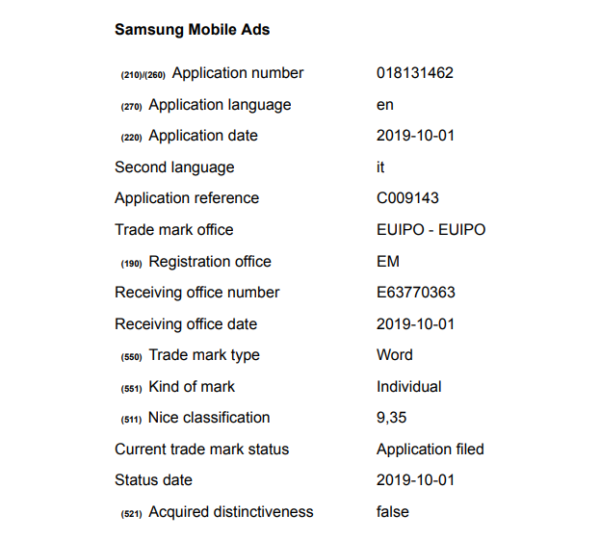