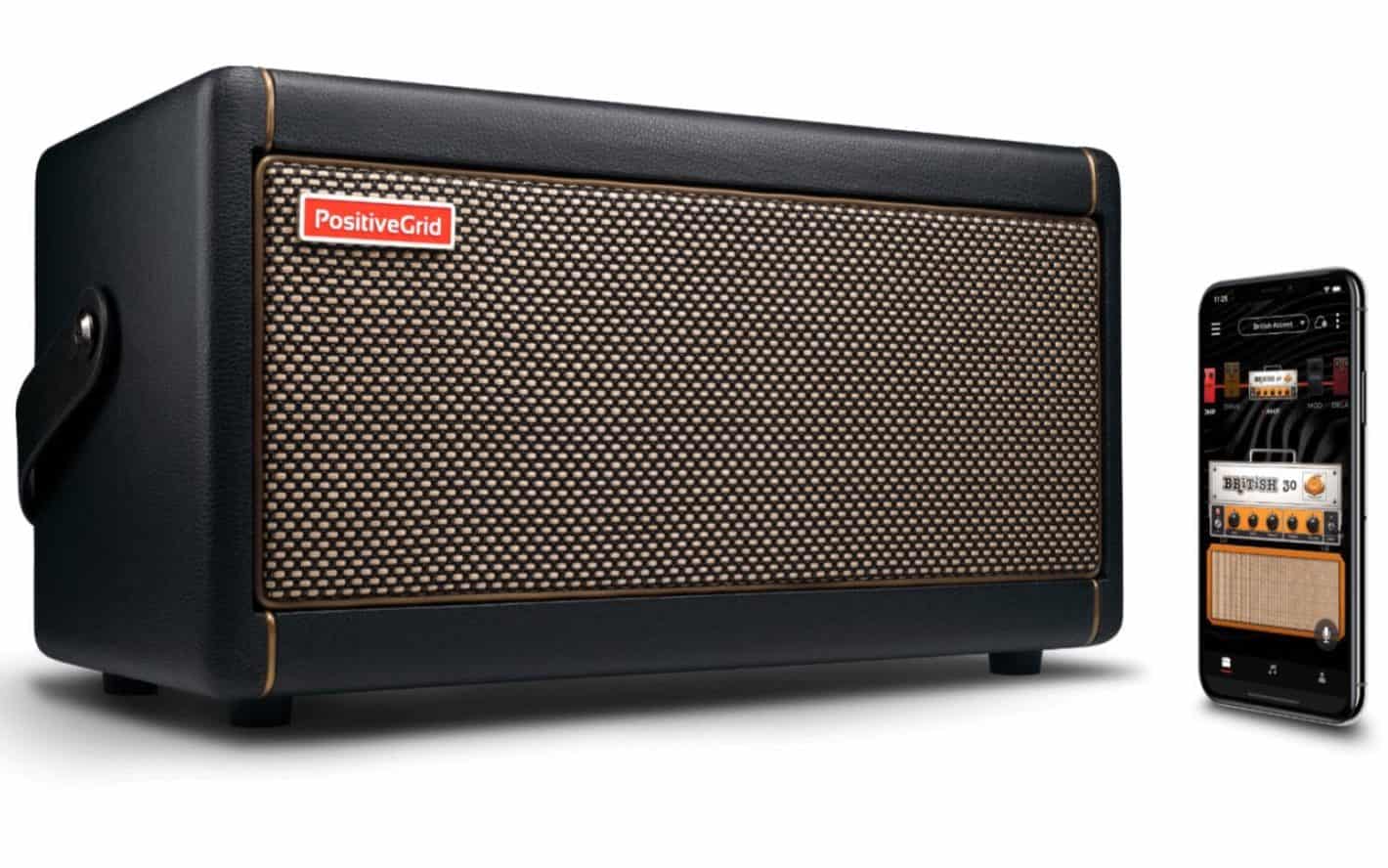 Positive Grid has now taken the wraps off of a new guitar amp dubbed Spark that delivers the best of the company's technology along with smart features that are all but unheard of in the industry.

At its core, Spark is a 40W guitar amplifier comprised of two 4-inch stereo speakers and all of the bells and whistles expected with a digital modeling amp. That's built up on top of the company's well-known BIAS tone engine, delivering 30 amp models and 40 effects. Since the amp also connects to a smartphone — either Android or iOS — players also have access to over 10,000 tones stored in a massive online library.

The top of the amp houses a full battery of knobs for fine-tuning sound. Of course, that includes knobs for Gain, Bass, Mid, Treble, Master, switching Mods, Delay, and Reverb. But there are also four programmable preset buttons, tap and tuner combo button for keeping time and in tune, and knobs for output volume and music volume.

The latter of those knobs may seem just a bit out of place, but they're there because Positive Grid's Spark smart guitar amp isn't a typical 40W amplifier. It also packs in voice controls and works as a Bluetooth speaker — in addition to being compatible with electric, acoustic, and bass guitars.

Finally, Spark works as a USB interface to make plugging into a computer and recording just as plug-and-play as using all of the amp's other features.

The Spark guitar amp isn't just 'smart' in terms of voice controls, realistic modeling, recording, and versatility either. Thanks to the Spark app, this amplifier is smart about helping users practice, learn, and play too.

With a Spark feature called Auto Chords, users are able to select and play songs from apps like iTunes, Spotify, and YouTube. The tool will automatically recognize chords that are being played in that song and display those in the app UI. The full run of chords is shown and they scroll along with the song, showing users what to play.

That can be slowed down, with controls to loop a given section as well. So it's going to be a great tool for beginners or for any musician trying to master challenging riff or learn new techniques.

Thanks to another feature called Smart Jam, users who prefer to play their own tunes don't need to take out an ad or practice by themselves. Smart Jam works with both the app and amp to actively learn the style and feel of what it's hearing. Users can activate the feature and the system will use that to automatically generate a rhythm section that plays along.

Access to an enormous 10,000+ tone library, Auto chords, Smart Jam, voice controls, and versatility to play on bass, electric, or acoustic already makes this a standout amp. The features are offset by similarly impressive specs for an amp this size, listed here as provided by Positive Grid.

The price for the Spark smart amplifier isn't necessarily cheap but it's certainly affordable with consideration for the versatility and technology it brings to the table. Positive Grid is currently running a pre-order promotion on its site and bundles that remain knock up to 35-percent off the standard price.

That means that those who just pick up the smart amp can pick up the device at just $209 — $90 off its $299 MSRP. That not only includes an amp to go with the mobile app, it also comes with PreSonus Studio One Prime recording software for use with the USB output and a computer.

At $244, down from $349, Positive Grid also throws in a Spark Traveler Gig Bag for storing or packing the Spark smart amp around.

The final pre-order bundle foregoes the carry bag in favor of PreSonus HD-9 Headphones, included at $246. That would ordinarily be retailed at around $379 and is a 35-percent saving.

The bundles are being sold in limited quantities with the first two scheduled to start shipping worldwide in January 2020. The latter bundle with PreSonus HD-9 Headphones begins shipping in December of this year.