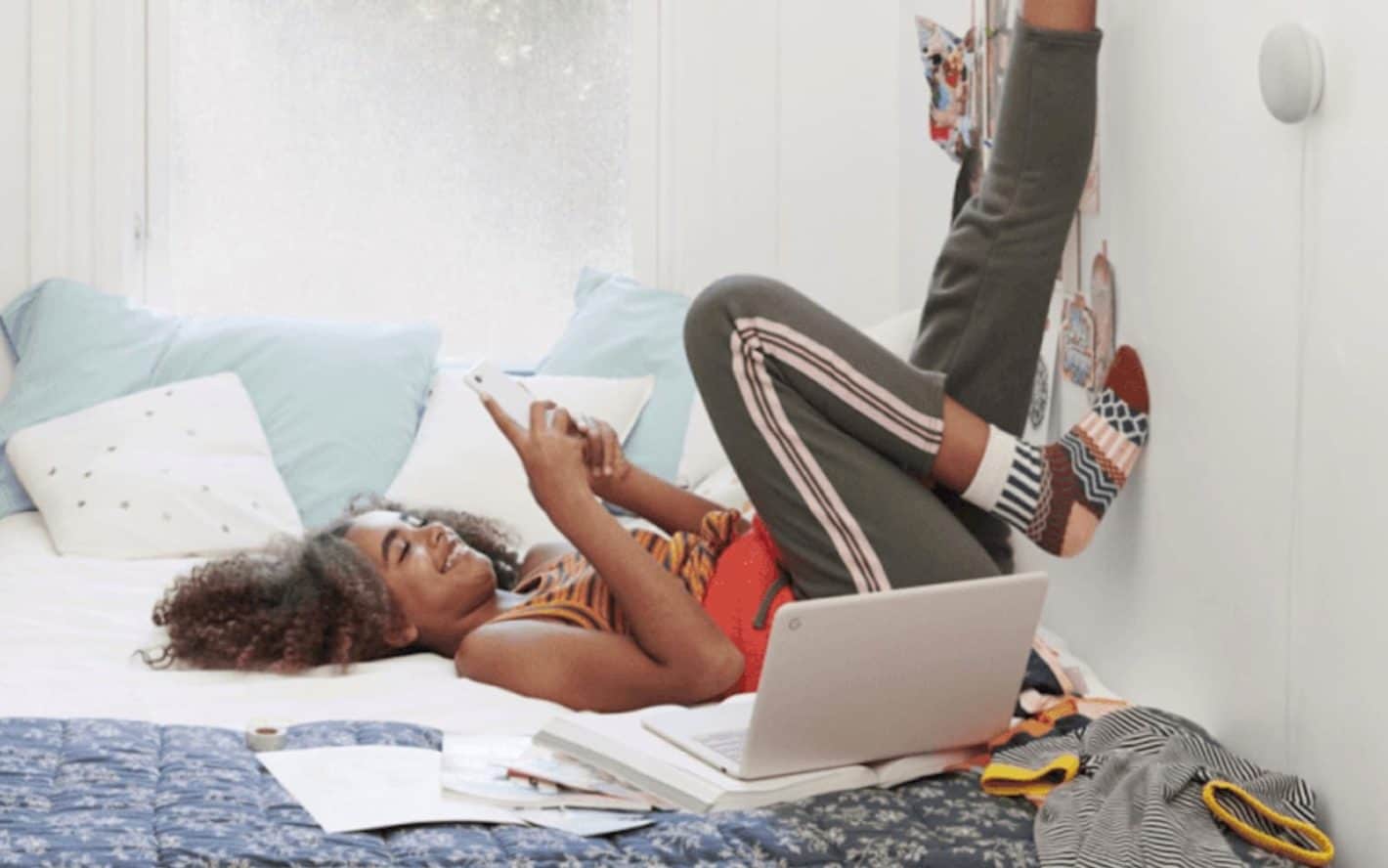 The Pixelbook Go appears to be making a cameo in leaked render images of the upcoming Google Nest Mini that were first reported earlier today. The render in question is intended to show that the Nest Mini features a wall mount, making it easier to place. Just below that, a device that looks almost identical to leaked Pixelbook Go images can be seen on the bed.

The big difference here is that the Pixelbook Go spotted in the Nest Mini images doesn't feature a weird prototype logo. Instead, the Google "G" logo that's common on Google Chromebooks and Phones can be seen at the top left corner.

A somewhat pixelated close-up look at the device reveals a USB-C port along its edge.

The Pixelbook Go also matches in color to those previously leaked images. It's shown in a configuration Google will reportedly call "Not Pink." That's one of two colors the search giant will reportedly offer. The second color is called "Just Black."

The keyboard on the other side is shown to feature a darker rose pink coloration to accent the primary hue. That's also identical to prior leaks. That doesn't necessarily mean that the rest of the device will align with those leaks. If it does, the opposing side will feature a USB Type-C port and both sides will feature an LED indicator. That side is also where the 3.5mm audio combo jack will be.

The render doesn't account for half of the Pixelbook Go leaks

At this point, leaks are getting a bit out of hand in the leadup to the launch of Pixelbook Go. Images only tell half the story and the other half has all but been told already too, including most of the specs.

The Pixelbook Go is expected to ship in a 13.3-inch clamshell form factor, with a touchscreen but no stylus support. That'll also abandon the widely-lauded 3:2 display ratio that many consider better for browsing and entertainment. Google plans to return to a more cinematic 16:9 ratio instead.

The search giant is also leaving behind uniformity in the exterior package. Options will reportedly be available for either an FHD or the 4K Molecular Display. Regardless of which is chosen, a 1080p, 60fps 2-megapixel camera is embedded just above in the top bezel.

On the inside, users will have the choice of buying the Pixelbook Go with either 8GB or 16GB of memory. The variations will include options with 64GB, 128GB, or 256GB of storage. Both will be based on the configuration purchased. Those include a choice that also leaves behind Intel's weaker processors in favor of Intel Core m3, Core i5, or Core i7 chips.

Intel will most likely supply connectivity solutions here too and that will most likely be a combo chip. The devices will ship with support for Wi-Fi and Bluetooth. A Google-designed Titan C chip will be in place for added hardware security.

It's only a day away

The latest laptop in the Pixel lineup will presumably be far more capable than prior iterations. The hardware, if leaks have been accurate, will be better suited for enterprise or handling intensive workloads than either the Pixelbook or Pixel Slate. The frame and design of the device will likely match that, although the most recently leaked render seems to show a more fun-oriented side to Pixelbook Go.

Whatever the case may be, it won't be long before the rumors and speculation can be cleared away entirely. Google will launch its new family of Chromebook at its Made by Google 2019 hardware event in New York tomorrow.