Skip to content
Advertisement
Trusted By Millions
Independent, Expert Android News You Can Trust, Since 2010
Publishing More Android Than Anyone Else
46
Today
193
This Week
193
This Month
5476
This Year
123024
All Time
Advertisement 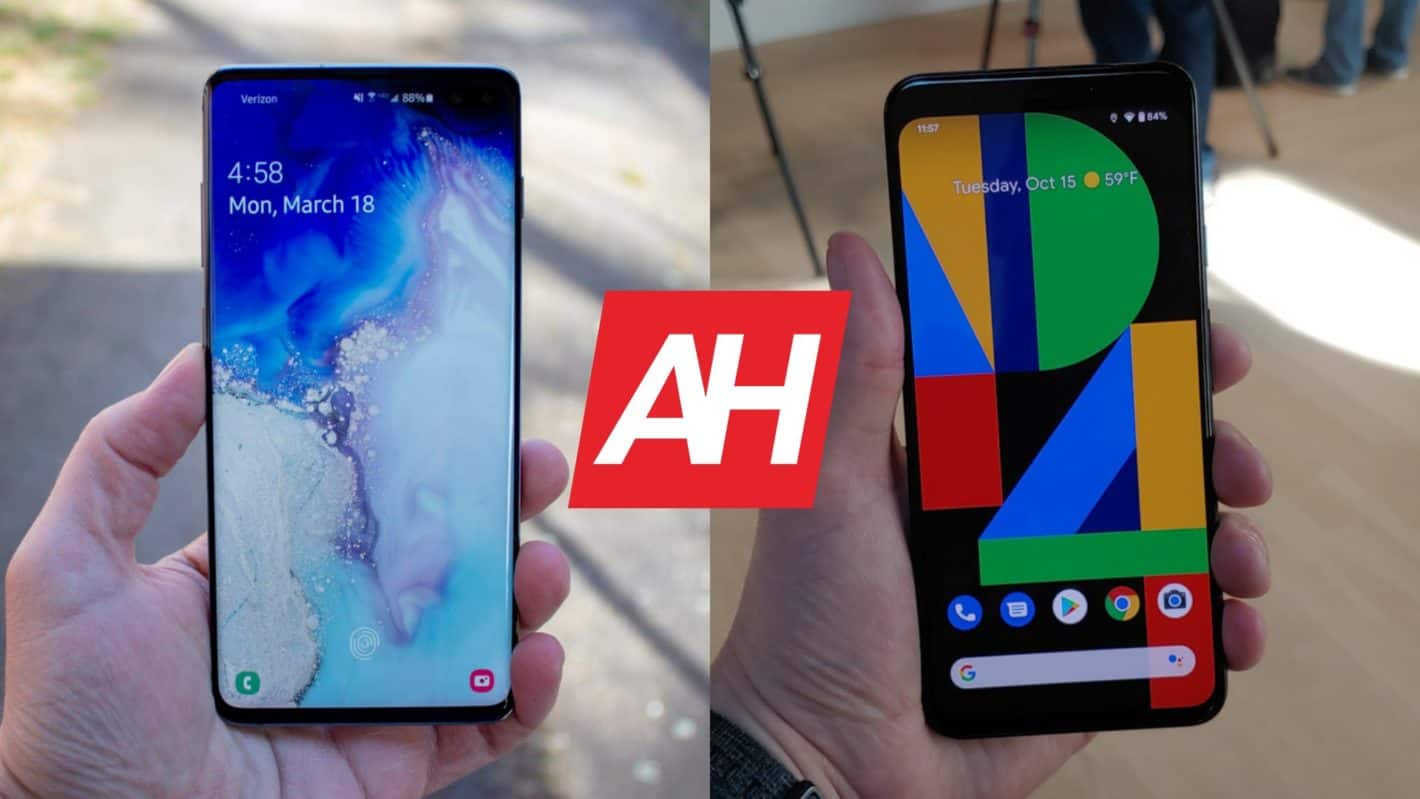 The Samsung Galaxy S10+ is one of the most popular smartphones of 2019, and some of you may still think of getting one. Well, if you’re trying to decide whether to get the Galaxy S10+, or the latest flagship from Google, the time has come to compare the Galaxy S10+ vs Pixel 4 XL.

Google’s latest flagships got announced quite recently. The company announced the Pixel 4 and Pixel 4 XL, and the XL model is considered to be a better option. If not for its higher-res display, then surely for its battery life, which is considerably better than what the Pixel 4 has to offer.

The Galaxy S10+ is, without a doubt, one of the best phones of 2019. So, how the two compare? Well, we’ll do our best to compare the Galaxy S10+ and Pixel 4 XL in a number of categories. This comparison will hopefully be able to help some of you make the right call.

In fact, it’s really hard to tell that the Pixel 4 XL has a glass back by looking at it. That goes for every variant except for the Just Black one, as that one is glossy. The Pixel 4 XL is not that slippery for a glass + metal phone, and it has sharper sides than the Galaxy S10+. Don’t get us wrong, its sides are not sharp to the point it’s unpleasant to hold, not at all. We actually prefer this design, as it’s not nearly as slippery.

The Galaxy S10+ has thinner bezels overall, but it comes with a display camera hole. That is a pill-shaped hole, which hosts two cameras, and is located in the top-right corner. The Pixel 4 XL, on the other hand, has a rather thick bezel above the display, and a thin one below it. It does not include notches or display holes, though.

The Galaxy S10+ includes a horizontally-aligned camera setup on the back. The Pixel 4 XL opts for a square-shaped camera module which hosts two cameras and an LED flash. Both of these phones are really good looking in their own right. Many would argue that the Galaxy S10+ looks better due to its thin bezels.

Still, the Pixel 4 XL doesn’t have a display hole or a notch, while it also combines color well with black sides, and it’s more practical to use. It just has that something that differentiates it. We’ll call this one a tie, as these two are both nice-looking phones, and are completely different. The display hole is quite large on the Galaxy S10+, and it does get in the way of content. The ‘forehead’ on the Pixel 4 XL is also quite ugly to look at, so… it’s a tie, at least in our book.

Both of these phones have really nice displays. Both of them offer QHD+ OLED panels, though those displays are somewhat different. The Galaxy S10+ includes a 6.4-inch QHD+ Dynamic AMOLED display with 60Hz refresh rate. That display is also curved, by the way.

The Google Pixel 4 XL, on the other hand, packs in a 6.3-inch QHD+ Flexible OLED panel. That display is flat, and it offers 90Hz refresh rate. Both of these panels are extremely vibrant, and truth be said, you can’t go wrong either way. They even come with the same display aspect ratio (19:9).

We cannot really declare a winner here either. Both displays offer excellent viewing angles, both are extremely sharp, and offer great colors. The Pixel 4 XL has that high refresh rate, which is a huge deal. The Galaxy S10+, on the other hand, has HDR10+ certification and Gorilla Glass 6 protection. It all balances out in the end, pretty much, so this is a tie as well.

Both of these devices are flagship-grade smartphones. Their internals are really powerful, but what are they like when it comes to performance. Powerful specs don’t necessarily mean great performance.

You’ll be glad to know that both of these phones perform admirably. The Pixel 4 XL was released quite recently, so it’s still in that initial period, while the Galaxy S10+ has been around for a while.

The usage is far more pleasant on the Pixel 4 XL due to its high refresh rate display. Because of its display, the Pixel 4 XL seems to be quite a bit smoother than the Galaxy S10+. Once you use a high refresh rate display, it’s really difficult to go back. Samsung should have opted for such a display this year, but it did not. It hopefully will include it in the Galaxy S11, though.

All in all, both of these phones are great performers, but we’ll give an advantage to the Pixel 4 XL. Its high refresh rate display, and clean software, make for an excellent combination.

The good news is, both of these phones have good battery life. Don’t expect amazing battery life, but they both should be able to get you through the day, well, most of you, at least. The Galaxy S10+ includes a 4,100mAh battery, while the Pixel 4 XL sports a 3,700mAh unit.

You will notice that the Pixel 4 XL has a smaller battery. In addition to that, it also has a higher refresh rate display, so how is its battery life comparable to the Galaxy S10+’s? Well, it simply is. We were able to pass the 6-hour screen-on-time mark with the Pixel 4 XL during our review period. The same happened when we reviewed the Galaxy S10+ as well.

Battery life may vary on your end, though, of course. Depending on what you do on your phone, you may get worse or better results. It is also worth noting that we haven’t been using the Pixel 4 XL for that long, only for about a week, so things may change. That battery is suspiciously small, so it could take a turn for the worse soon.

The Galaxy S10+ comes with a dedicated ultrawide camera, which is quite good. That is a real miss for Google, for not including an ultrawide camera on the back. Still, the Pixel 4 XL has plenty to offer without it.

During the day, both phones can capture great photos, with plenty of detail, and great dynamic range. The Pixel 4 XL tends to capture pictures with cooler tones, though. The Pixel 4 XL’s HDR works a bit better when there are extreme light differences in an image.

When it comes to night shots, the Pixel 4 XL reigns supreme. The Night Sight mode on the phone is better than ever. It can not only capture more detail and light in such conditions, but it also offers more detail. The Galaxy S10+ is not a bad shooter in the nighttime, but it cannot compare to the Pixel 4 XL. The Pixel 4 XL also has a really nice astrophotography mode for shooting the night sky, if you’re into that sort of thing.

Both phones offer great video recording at both 1080p at 30fps and 4K at 30fps. The Galaxy S10+ also offers 4K at 60fps, but without OIS or EIS, and we definitely do not recommend you take advantage of that.

Front-facing shooters are great on both phones. Both devices can also handle portrait shots really well, but the Pixel 4 XL has an advantage in that regard as well. All in all, the Pixel 4 XL is a step ahead of the Galaxy S10+ in the camera department.

In terms of audio, both of these devices are compelling. Let’s talk about their speakers first. Both devices offer stereo speakers. The main speaker on both phones is located at the bottom, while the secondary one is placed above the display.

Both speaker setups can provide really loud and crisp sound, we really did not have issues with either one. Distortion is really minimal at high volumes, which is great. Sound output is comparable when it comes to speakers.

If you plug in your headphones, however, you’ll notice the difference. The Galaxy S10+ is able to provide a more balanced sound through a pair of quality headphones, and it can get a bit louder as well.

The S10+ even includes a 3.5mm headphone jack, which is a port the Pixel 4 XL does not have. The Galaxy S10+’s speakers are tuned by AKG, while the phone also offers Dolby Atmos sound.

All in all, you won’t go wrong with either one of these devices in terms of audio. We will give a small edge to the Galaxy S10+, though, due to sound output via headphones, and a 3.5mm headphone jack.

That brings us to the end of the Galaxy S10+ vs Pixel 4 XL comparison. Truth be said, both of these phones are really compelling. Both look great in their own right, and are excellent performers all around.

The Pixel 4 XL did win overall, though, due to its cameras and somewhat better performance. We enjoyed the Pixel 4 XL’s experience a bit more, but you may prefer the Galaxy S10+. You should consider what is important to you, and make a decision based on that, of course.