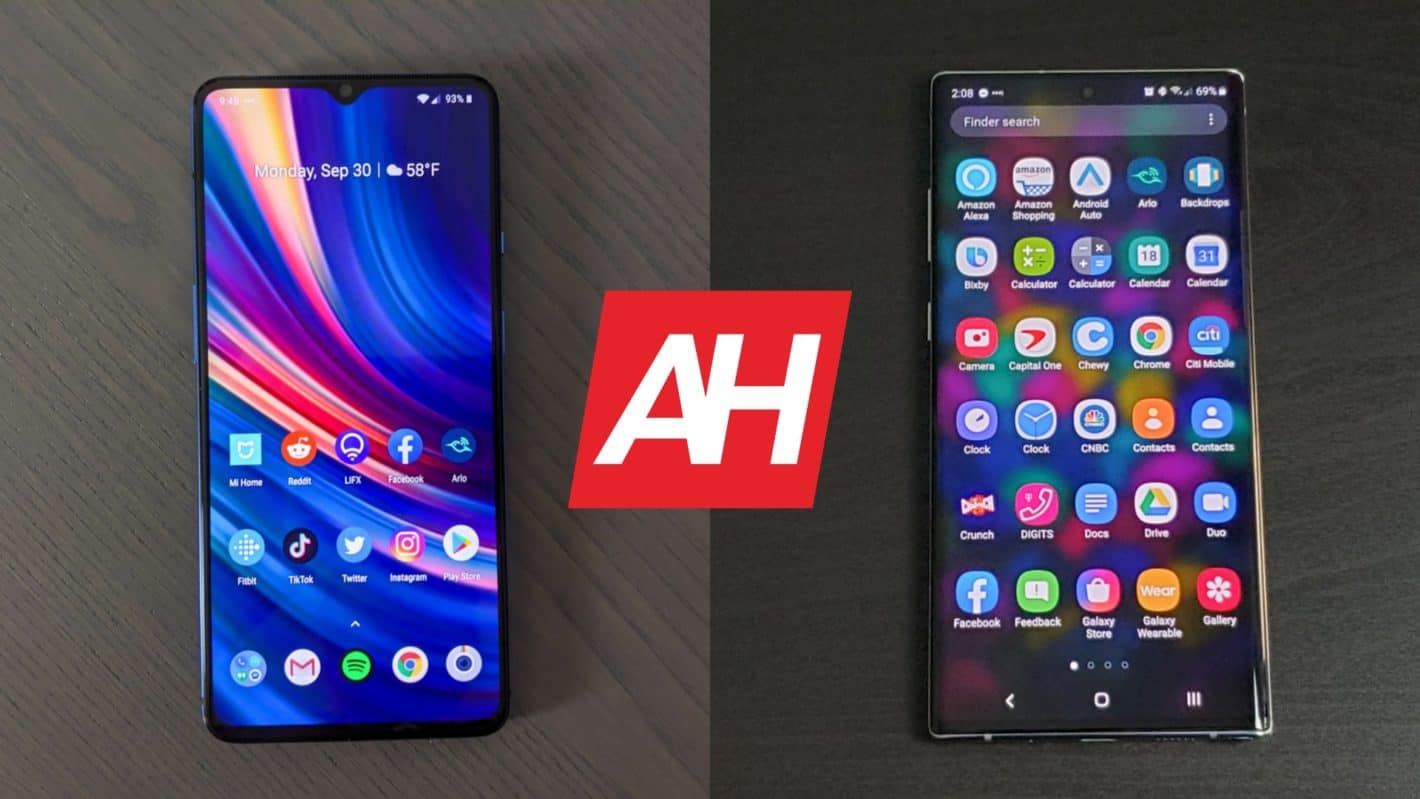 Both devices are considered to be flagship offerings from their respective companies. Truth be said, OnePlus is expected to introduce the more powerful variant of the OnePlus 7T later this month. That variant is not expected to be a huge improvement over the OnePlus 7T, though. 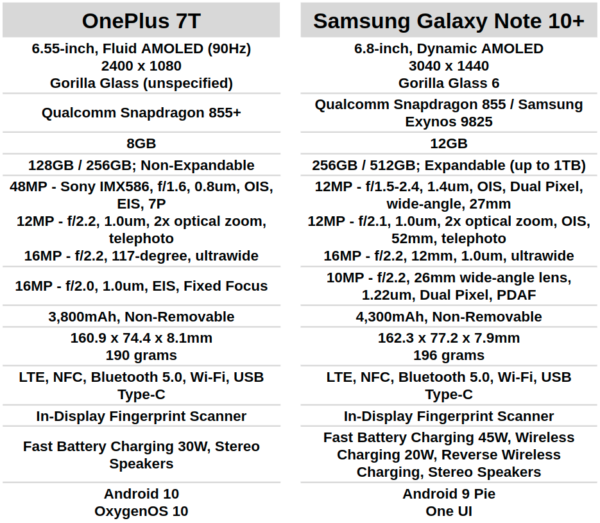 Both of these phones look quite sleek. Your personal preference will play a huge role in terms of choosing which design you like best. Both phones are made out of metal and glass, but they do look considerably different. On top of that, the in-hand feel is quite different as well.

The OnePlus 7T has more rounded edges. That, in combination with its overall size, makes the device easier to hold and use. That goes both for one-hand usage, and two-hand usage, pretty much.

The Galaxy Note 10+'s screen-to-body ratio is a bit higher. Its bezels are a bit thinner than those on the OnePlus 7T. Samsung opted to include a display camera hole for the selfie camera on the Galaxy Note 10+. OnePlus, on the other hand, opted for a waterdrop display notch. That notch is quite a bit smaller than the one on the OnePlus 7, though.

Both of these devices offer great designs. Truth be said, we cannot decide which one has the edge, as it's all a matter of personal preference. The OnePlus 7T surely is easier to handle, but many would say the Galaxy Note 10+ looks more appealing. It's up to you to decide.

Many of you would assume that the Galaxy Note 10+s display obliterates the OnePlus 7T's, and move on. Well, that's not really the case. In fact, this category may end up surprising you. Both of these phones do offer great panels, but those panels are quite different.

Both displays support HDR10+ content, by the way. Now, once you use a 90Hz display, it's really difficult to go back to a 60Hz one, especially when that panel is as good as the OnePlus 7T's. You really do need to try it out before deciding. Pretty much every major flagship will have a 90Hz+ refresh rate in 2020, that's just an assumption.

Now, at this point, it may seem like the Galaxy Note 10+ is still in the lead… well, that may be the case, but wait. OnePlus did some heavy tweaking of the OnePlus 7T display, and it looks even better than it should. Well, it turns out there's a good reason why that is.

Android Authority published some technical display comparison info between these two panels. What's interesting is, the OnePlus 7T wins in pretty much every category, except "Resolution Clarity". That difference is resolution is not even that noticeable, in fact, it's almost impossible to differentiate the resolution difference.

The OnePlus 7T wins in Color Temperature, Max Brightness, Color Accuracy, and Gamma categories in the aforementioned test. The results are pictured in an image above, and taken from here.

All in all, both of these displays are great, amongst the best in the business. At first, the Galaxy Note 10+ may seem like a clear winner, but that is not the case. The heavy tweaking of the OnePlus 7T's display, plus a higher refresh rate basically bring this display on the Galaxy Note 10+'s level.

So, what about performance? Well, both of these phones are brand new, and they're also flagship-grade phones. You'd expect their performance to be great, right? Well, luckily, that is the case.

They're both equipped with flagship processors, and offer plenty of RAM. On top of that, both devices come with UFS 3.0 flash storage, which only helps things run smoothly. The OnePlus 7T's software is lighter, and it does seem to be a bit better optimized than the Galaxy Note 10+'s.

That is not surprising, as OnePlus basis its phone on smoothness, basically. That 90Hz display only helps things, as the phone does both feel and look smoother in terms of performance than the Galaxy Note 10+.

Just to be clear, both of these phones are extremely fluid, but it's difficult not to give the OnePlus 7T an edge here. Better software optimization, lower-res display, and that smooth display refresh rate make the OnePlus 7T a winner here.

What about battery life? Well, they're quite similar in that regard, they're both great in this department. The Galaxy Note 10+ features a 4,300mAh battery on the inside, while the OnePlus 7T comes with a 3,800mAh unit.

The Note 10+ does have a higher-res display, but it also has as lower display refresh rate. The Galaxy Note 10+ will be able to provide most of you at least 6 hours of screen on time.

The OnePlus 7T will probably be able to get that for most of you as well. The two phones are almost on the same level as far as battery consumption is concerned.

You can always purchase a 45W charger for the Galaxy Note 10+, as the phone does support such charging. That charger will get you to 100-percent even faster than what the OnePlus 7T has to offer.

OnePlus' smartphones usually have one weak characteristic, and those are its cameras. Well, that's no longer the case, per se. The OnePlus 7 Pro did not have great camera performance when it arrived, but OnePlus changed that via software updates. The OnePlus 7T, on the other hand, has all those updates from the get-go, and it does offer a compelling camera experience.

Both phones have great dynamic range, and both are really good shooters in low light as well. The Galaxy Note 10+ does tend to provide a more balanced image in such conditions, though.

The OnePlus 7T has an advantage when it comes to macro photography due to a dedicated camera motor. It allows you to get much closer to a subject than the Galaxy Note 10+. The OnePlus 7T still tends to blur the edges of photos a bit. The effect is much less noticeable than it was on the OnePlus 7 Pro, initially, but it's still there.

Both the Galaxy Note 10+ and OnePlus 7T come with stereo speakers. In both phones, the main speaker sits on the bottom, while the secondary one is hidden under the earpiece grille on the front.

Those speakers are really good on both phones, no complaints there. Audio through loudspeakers on both devices is quite sharp and clean, and you won't get noticeable distortion on high volume levels.

Both phones offer Dolby Atmos support, while the Galaxy Note 10+'s audio is tuned by AKG. Now, neither of these two phones offer a 3.5mm headphone jack. You can use a Type-C to 3.5mm port dongle, of course. Audio through decent headphones (both wired and wireless) is really good on both phones, though we'd give a small advantage to the Galaxy Note 10+. It just seems like the sound is a little bit crisper, and a bit louder as well. The difference is not big at all, though.

What we're trying to say here, the OnePlus 7T is almost as good as the Galaxy Note 10+. Both phones are extremely compelling, and if you're not willing to splash out for the Galaxy Note 10+, the OnePlus 7T is an excellent choice. In fact, it may even be a better choice for the vast majority of people. There are a number of reasons for that, but an extremely fluid OS and flat display are some of them.