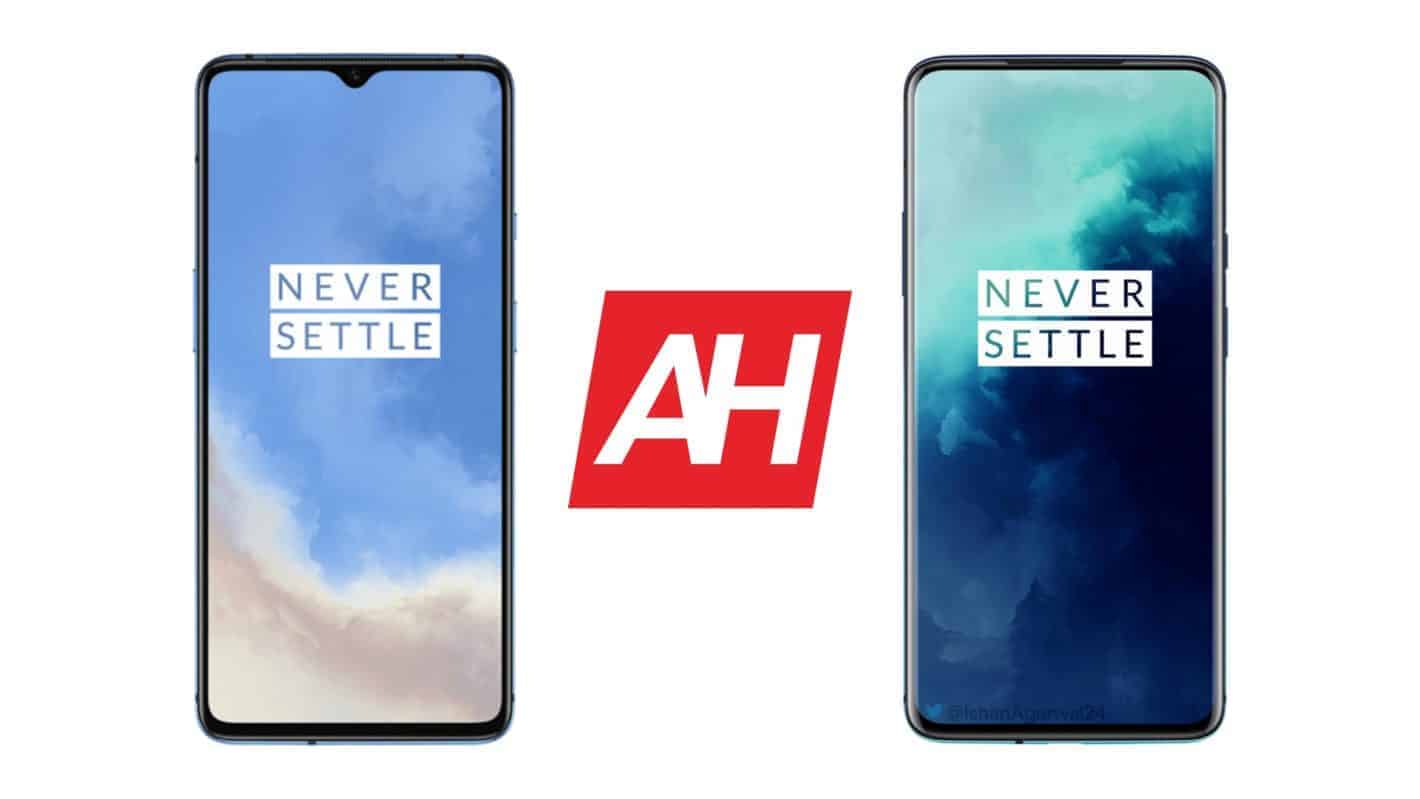 The OnePlus 7T vs OnePlus 7T Pro comparison is here. These two are the newest and most powerful smartphones that the company has released to date. The OnePlus 7T was initially launched on September 26, while the 'Pro' model followed about two weeks later.

These two handsets do have some things in common, of course, they are siblings after all. They do share some design hints, while their specifications are similar to a degree. They are not the same, though, not at all.

Well, we're here to compare the OnePlus 7T and 7T Pro, and hopefully help you with your purchasing decision. These two phones are not that different in terms of power and overall quality, so you may be surprised by this comparison, and opt to save some cash afterwards.

The OnePlus 7T and 7T Pro are both made out of metal and glass. They both sport the so-called 'glass sandwich design'. Despite that, though, they do not feel the same in the hand, they actually feel quite different. They are equally as slippery, though.

The OnePlus 7T is smaller in every way, it's shorter, narrower, and thinner… on top of that, it's also lighter. The 7T Pro may be heavier, but it does not include that tiny display notch at the top, like the 7T. OnePlus opted to adopt the OnePlus 7 Pro design for the 7T Pro, together with a pop-up selfie camera.

Both phones have extremely thin bezels, and their "chins" are about the same size. The OnePlus 7T Pro does include a curved display, which is yet another design-related different when you look at the two devices from the front.

The OnePlus 7T includes a circular camera setup on the back, while the 7T Pro sports three vertically-aligned cameras. The 7T Pro's camera setup on the back is arguably better-looking, though not necessarily more powerful. We'll talk about that a bit later, though. All in all, the OnePlus 7T Pro does look like a more appealing phone of the two, both from the back and from the front.

If you put the OnePlus 7T and 7T Pro one next to the other, you really will not be able to see the difference in resolution, at all. Both of these displays are truly great, and you won't go wrong with either one. Both offer punchy colors, they're extremely sharp, and viewing angles are great. There is some reflection on the sides of the 7T Pro, though, but that's because its display is curved, so… it's can't be avoided.

OnePlus' flagship handsets are usually extremely compelling when it comes to performance. Things are no different when it comes to these two flagships, not at all. In fact, they are amongst the best phones in the market as far as performance is concerned.

Both phones are fueled by the Snapdragon 855 Plus 64-bit octa-core processor. This is Qualcomm's most powerful processor to date. On top of that, OnePlus included 8GB of RAM inside of these two phones, LPDDR4X RAM. UFS 3.0 flash storage is also a part of both packages.

On top of all that, both have 90Hz displays, and Android 10 with extremely optimized OxygenOS 10 on top. All that results in blazing fast performance, on every level. There is basically not something these two phones can't handle with ease, and that includes really demanding games.

Both devices offer amazing performance, and we really can't differentiate between the two. No matter which one you opt for, you'll probably get the fastest Android phones available at the moment.

The OnePlus 7T includes a 3,800mAh battery on the inside, while the 7T Pro offers a 4,085mAh battery. The 7T Pro's battery is not much bigger, and the phone does come with a slightly larger, higher-res display, but it still manages to offer more in terms of battery life.

Truth be said, you should be able to get over 5 hours of screen on time with either of these phones, with ease. The 7T Pro may be able to push you past that 6-hour mark regularly, though. It all depends on your usage, really.

Both phones are equipped with the same charging tech. Both offer Warp Charge 30T which is 23-percent faster than Warp Charge 30. In other words, you will be able to fully recharge both of these phones in under an hour. Neither of the phones offer wireless charging, though.

The main difference comes to the telephoto camera, though. The OnePlus 7T offers 2x optical zoom, while the 'Pro' model can provide 3x optical zoom. Both devices also offer a special mode for macro photography.

The OnePlus 7T Pro basically adopted the OnePlus 7 Pro cameras with the addition of some macro photo-taking capabilities. Pictures that you can get from these two phones are pretty much the same.

Both phones can shoot some really good-looking images. These are not the best cameras in the market, but they're really good nonetheless. The company's Nightscape has also been improved quite a bit since the OnePlus 7 series launched.

In terms of audio, well, there's no real difference between these two phones. They offer the exact same audio experience, that goes for both their loudspeakers, and sound when you plug in a decent pair of headphones.

Both devices offer stereo speakers that are quite good. They do not get distorted at max volume, well, maybe just a little bit, but it's barely noticeable. They're not tiny by any means, so… nothing to complain about here, really.

If you plug in a decent pair of headphones, you'll get good sound quality out of these two phones. The company's new flagships are not providing the best sound we've ever heard, but it's plenty sharp, and well balanced.

Both phones offer Dolby Atmos sound, and neither of them has a 3.5mm headphone jack, which is a shame. You will not even get a dongle in the box (with either of these two phones), so keep that in mind.

So, which of these two phones is the better choice? Well, it all depends on who you are, and what you prefer. If you prefer not having moving parts inside of your phone, and you like flat displays… the smaller 7T handset is for you. If you don't mind having a pop-up camera, and want a better-looking phone without a notch, the 'Pro' model is the phone for you.

Both of these phones are great, and it all depends on what you prefer, really. It also depends on how much you're willing to spend, as the 7T is the more affordable option here. If you live in the US, however, there's not much choice for you, as the 7T is the only one of the two that is available. Both can be purchased in Europe, though. The OnePlus 7T Pro is an overall winner of this comparison, if that wasn't clear thus far… but the 7T is not far behind, at all.