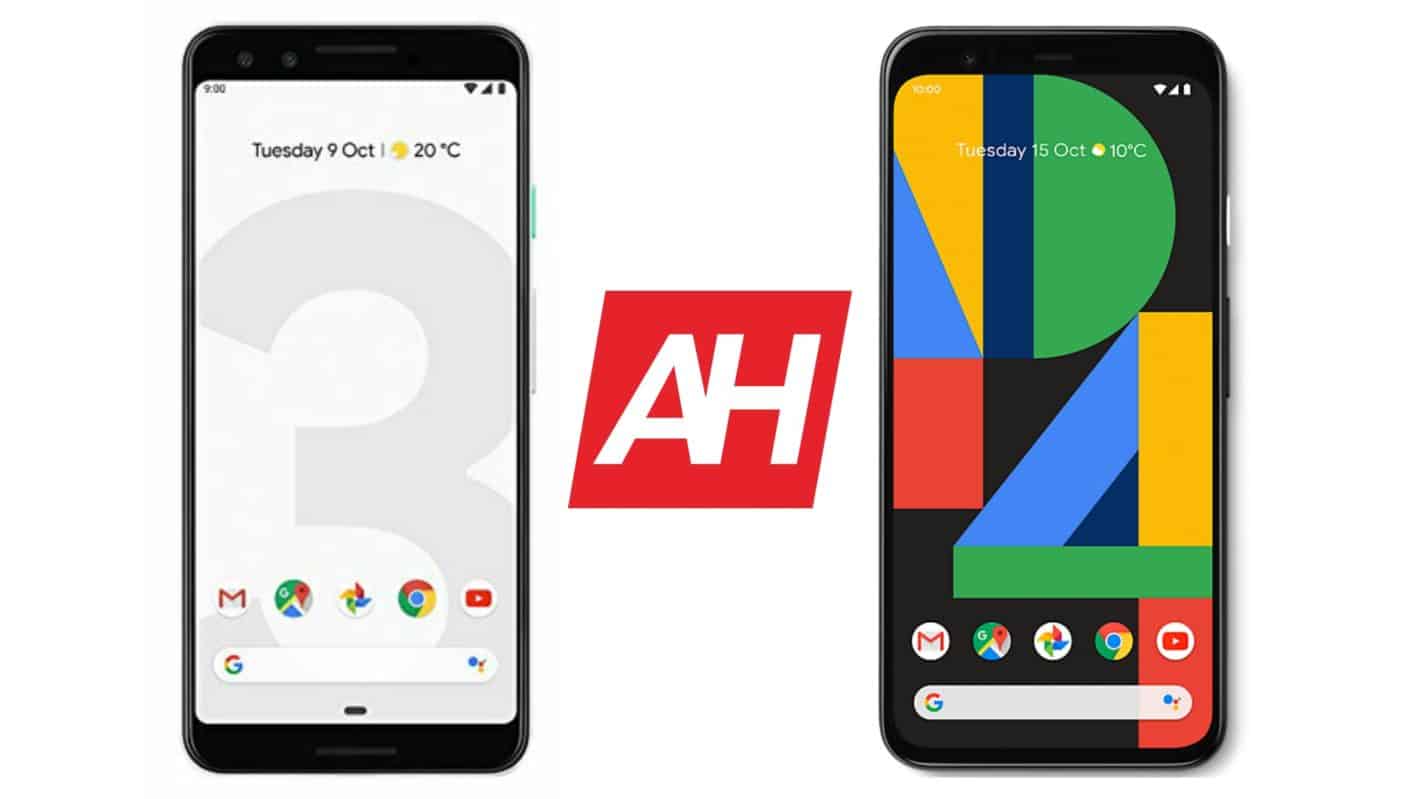 Following the 'XL' variant comparison, it's time to pit the Google Pixel 3 vs Pixel 4. The Google Pixel 4 is the smaller variant of Google's brand new flagship, while the Pixel 3 played that role last year.

It's hard to deny that both of these phones are compelling, but how do they compare. Is it worth spending all the extra cash on the Pixel 4, or should you get the Pixel 3 instead, and be done with it?

Well, that's something that we'll try to help you answer in this comparison. We'll compare the two phones across a number of categories, just to see which one comes out on top. The Pixel 4 may win in most categories, as it's brand new and everything, but you may be surprised. Let's get started.

Both of these phones are made out of metal and glass. They do both look and feel different, though. The Pixel 3 includes the two-tone design on the back, while the Pixel 4 does not. Its large camera module on the back does contrast with its back cover, though, at least on the Clearly White and Oh So Orange variants.

The Pixel 3 includes a single camera on the back, and it's rather compact as it's not a part of a large camera module. The story with the Pixel 4 is considerably different, as that camera module on the back packs in two cameras, and an LED flash. The camera setup protrudes on the back of the Pixel 4 quite a bit.

The Pixel 3 offers more curves in general, and it does feel more slippery in the hand, but not by much. The whole Pixel 3 and Pixel 4 series of devices is not that slippery, considering they're made out of metal and glass.

We'll give this category to the Pixel 4, though. The phone has thinner bezels, and it actually looks really nice overall, it looks unique. On top of that, it's even less slippery than the Pixel 3, which is a plus.

So, what about the display? Well, the Pixel 4 has an edge in this category as well. Don't get us wrong, the Pixel 3 has a really good display, but it cannot measure up to the Pixel 4's. The Pixel 3 comes with a 5.5-inch P-OLED panel, while the Pixel 4 includes a 5.7-inch flexible OLED display.

Both of these displays support HDR content, and both are protected by a sheet of Gorilla Glass 5. The Pixel 4's panel supports a high refresh rate of 90Hz, though, while the Pixel 3's does not. Due to this display, the Pixel 4 seems to be considerably faster, as the content runs way smoother on the panel.

That is not the only reason why the Pixel 4 has an edge, though. The Pixel 4's panel does seem to be a bit sharper to the naked eye, even though they're quite comparable in terms of resolution. Viewing angles are great on both, and both have great color representation. It is also worth noting that the Pixel 3 offers 18:9 display aspect ratio, while the Pixel 4 has a higher panel with 19:9 aspect ratio. All in all, this category goes to the Pixel 4.

The Google Pixel 3 is still a great performer, but not as great as the Pixel 4. That is not surprising, as the Pixel 4 includes a more powerful processor, more RAM, and that high refresh rate display.

Both phones will handle games without a problem, any type of game, really. The Pixel 4 does have more firepower in the CPU department, but the Snapdragon 845 is not a slouch, not at all. We really did not have any issues when it comes to gaming on either of the two devices.

Battery department is where both phones disappoint, though. The Pixel 3 includes a 2,915mAh battery, which is supposed to power its 5.5-inch fullHD 60Hz display. The Pixel 4, on the other hand, not only has a smaller battery, but it also has a larger, higher refresh rate display.

Battery life on the Pixel 3 is quite disappointing, but the Pixel 4 takes that to a whole new level. We don't really understand why Google went with such a tiny battery in the Pixel 4, especially considering that it increased display size, and display refresh rate, but there you go.

If you hope to have at least decent battery life, you'd better go with the Pixel 3. If you do want a Pixel 4 device, then the Pixel 4 XL is a much better option. The Pixel 4 may do it for light users, but if you're not amongst them, you'll need to charge this phone before bed. It is especially not recommended for heavy users, as you'll need to charge it in the afternoon, for soon.

Both of these phones have great cameras, no doubt about it. The Pixel 4, however, has an advantage here. Photos taken with the Pixel 4 end up being noticeably sharper, while both offer great HDR+ mode. The Pixel 4, however, comes with Live HDR+, which processes images live in your viewfinder, so that you can see the final product even before you press the trigger.

The Pixel 4 also comes with some additional camera modes, which are not gimmicks. It has a mode for astrophotography, and a mode for action shots as well. Both work really well. Now, those two modes may make their way to the Pixel 3 as well, as Google did say that camera software features will come to the Pixel 3, though, so we'll see how that works once it happens.

Video recording is really good on both, but do note that you're not getting 4K at 60fps. Video stabilization is really good, though, and for the vast majority of people, both phones will do a great job.

Those stereo speakers provide really good sound, while the same can be said for audio through earphones. That goes for both a solid pair of wired and Bluetooth earphones. We did not really notice much difference between the two. Sound output can get a bit louder on the Pixel 4, but that's more or less it.

Those stereo speakers get pretty loud, and the distortion is minimal at high volumes. They're not tinny or anything of the sort, so you don't have to worry about. All in all, it's a tie for the sound department.

The Google Pixel 4 is a clear winner here. If Google went the extra mile and included a decent battery inside of that phone, it would be a much more appealing device. This way it's good, but it's definitely not for everyone.

The Pixel 4 does offer a better display, performance, and camera experience than the Pixel 3. The phone also looks nicer, at least in our opinion, but your mileage may vary. In any case, if you don't mind spending some extra cash, getting the Pixel 4 may be a better idea… if you don't mind really poor battery life, though.