After much speculation the new NVIDIA SHIELD TV (2019) is now here. We'll have a more in-depth review ready after we've spent some more time with the device. In the meantime, here's our first impressions.

The SHIELD TV has always been the default Android TV streaming player for many. This is understandable as it always has been an extremely powerful device.

NVIDIA is looking to continue that trend but instead of focusing on the hardcore enthusiasts, the new SHIELD TV is more of a mainstream device.

A new SHIELD TV and a new design

The SHIELD has gone through three cycles now. The 2015 model was followed by the 2017 model which stuck very closely to the original’s design. Yes, the 2017 model was more compact, but it was still easily identifiable as a SHIELD.

That’s no longer the case. Well, technically it is. NVIDIA is launching two versions of the SHIELD TV. One is a “Pro” device and that's more of a natural continuation of the previous SHIELDs. Not only does it look largely the same, but it's also more focused on those who care about the power and performance.

It's what NVIDIA refers to as the SHIELD for "enthusiasts."

The all-new SHIELD TV is the one we’ve had a chance to play with and that one cares less about what you think of its specs and performance. Yes, it comes with a tweaked version of the Tegra X1 designed for better performance, but it has less RAM and less storage than both the 2015 and 2017 versions.

In fact, less is very much a thing with the new SHIELD TV

NVIDIA goes down the less is more route

In addition to the less RAM and less storage, the overall design very much focuses on being less. The whole device is super small in size, there’s less ports, and less (read: none) lights. It is simply less in every respect. It even costs less.

And that’s all intentional. NVIDIA explained to us that there were two main motivations behind the design although they are in reality different sides of the same coin.

Firstly, NVIDIA wants to appeal to more users with the new SHIELD. Specifically, those who are less interested in tech in general. While that might sound like a very un-NVIDIA thing to do, it makes sense.

Tech enthusiasts already know about the SHIELD, what is capable of, and are already sold on the device. NVIDIA wants to make the new SHIELD as appealing to the average consumer as possible. That is, those who might not need a large device, lights, or across the board greater specs.

The second motivation, an extension of the first, is NVIDIA wanted this SHIELD to be more home-friendly. Again, that means a smaller size, less lights, and a device that's generally more in keeping with a minimalist home setup.

The first thing to note is that the actual player is probably even smaller than you already expect. In fact, it is not that much bigger than the remote control. 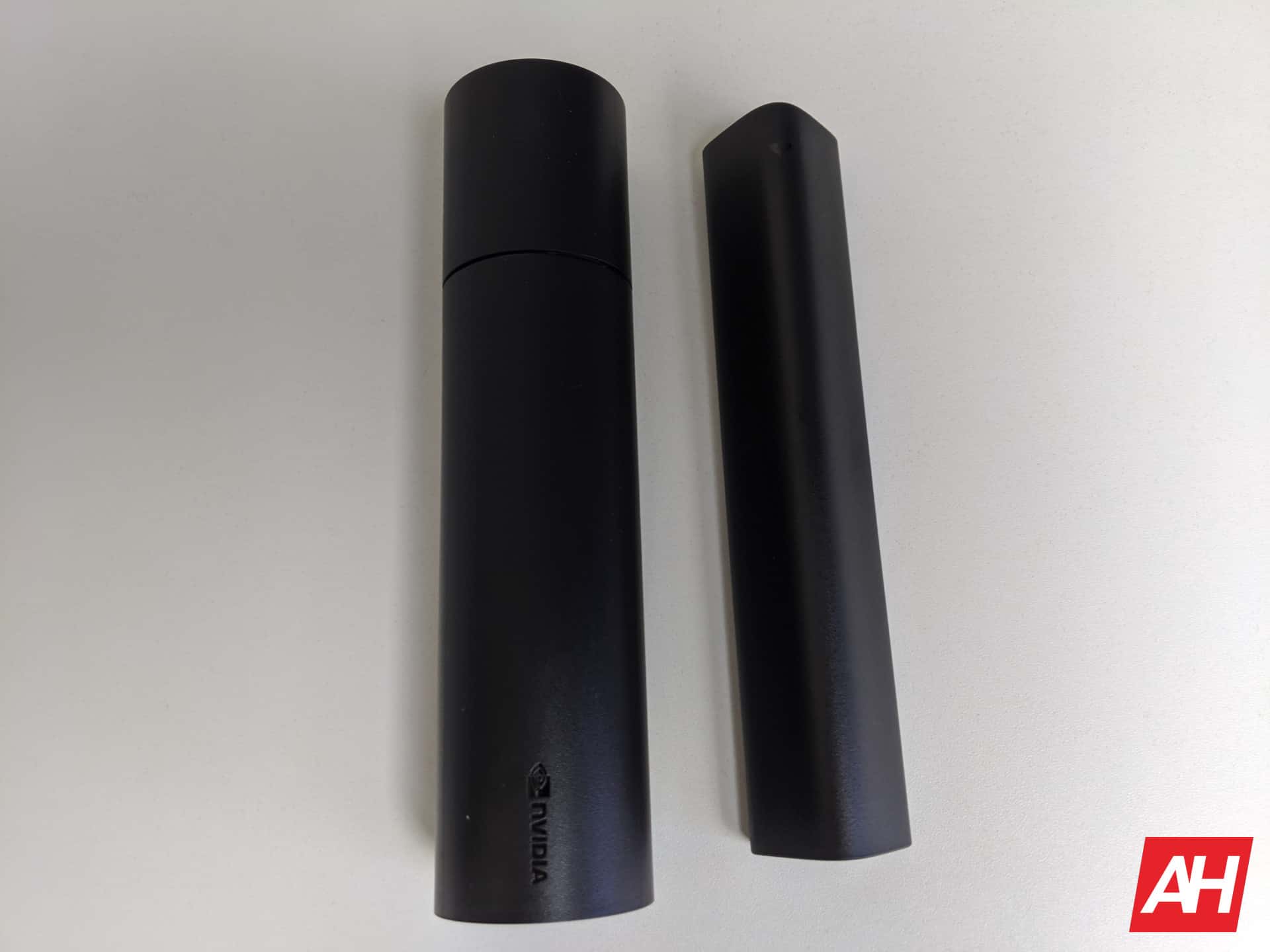 The design also means it can be positioned in a setup as more of an in-line piece. For example, all the ports and connectors are on either one side or the other. So when you hook the device up to the wall socket and the TV, the SHIELD becomes part of the cable. You’re not looping in and out and instead, everything is passing directly through the SHIELD.

Overall, this is an interesting design and certainly separates the new SHIELD from the typical TV stick. The design makes it super easy to hide the SHIELD from view and although it’s not quite as small as a TV stick, it feels small enough to carry with you. If you wanted to take it with you to a friend's home or a hotel, you probably can fairly easily.

The overall design and size sort of reminds me of a baton in a relay race.

When it comes to the remote, more is more

It is not only bigger, but it also comes with lights (more on this in a minute) and a ton of new features.

First things first, the lights. Whether this is meant to be the main selling point or not, it is for me. The remote includes motion-activated lights.

In other words, as you pick up the remote all the buttons light up making it easier to see and use in the dark. Likewise, when you put the remote down, the lights turn off again. Here it is in action.

The response so far has been excellent. This feature appears to be very well deployed and it is already proving to be extremely reliable. It just works and adds genuine value to the SHIELD experience.

With an overall larger remote, there’s also more room for buttons and that’s exactly what NVIDIA has gone with. You now have the ability to more easily navigate the interface, fast-forward, and even adjust the volume.

While the old SHIELD Remote allowed you to adjust the volume using a slider, it was never that great. The new buttons change that completely. 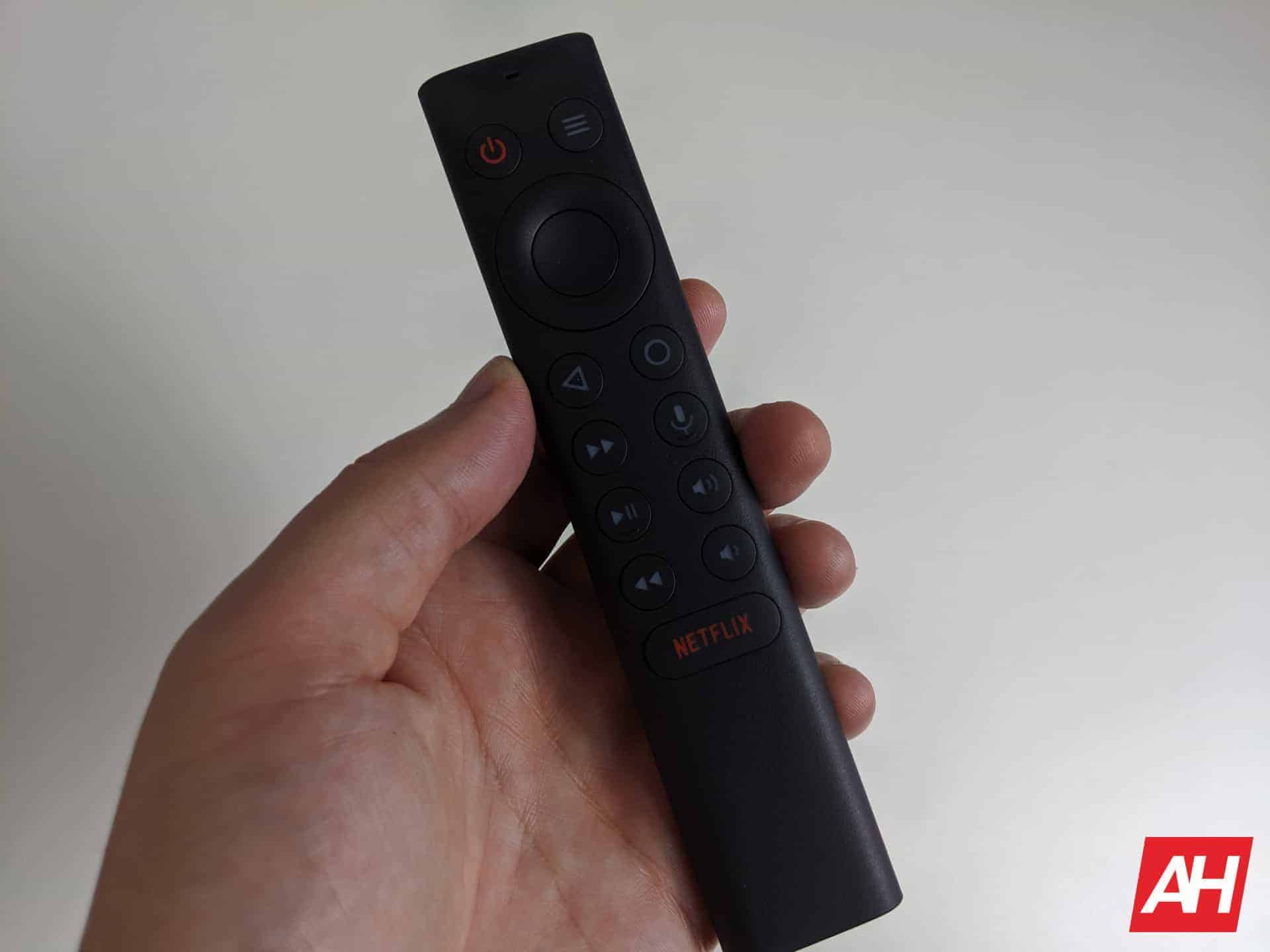 What's more, many of the older and popular features are still there, like the IR blaster.

There’s also a new customizable button. By default this button is set to launch the settings menu but you can change it to do many other things. For example, take a screenshot, launch the AI-enhanced upscaling demo (more on this in the next section), and so on. 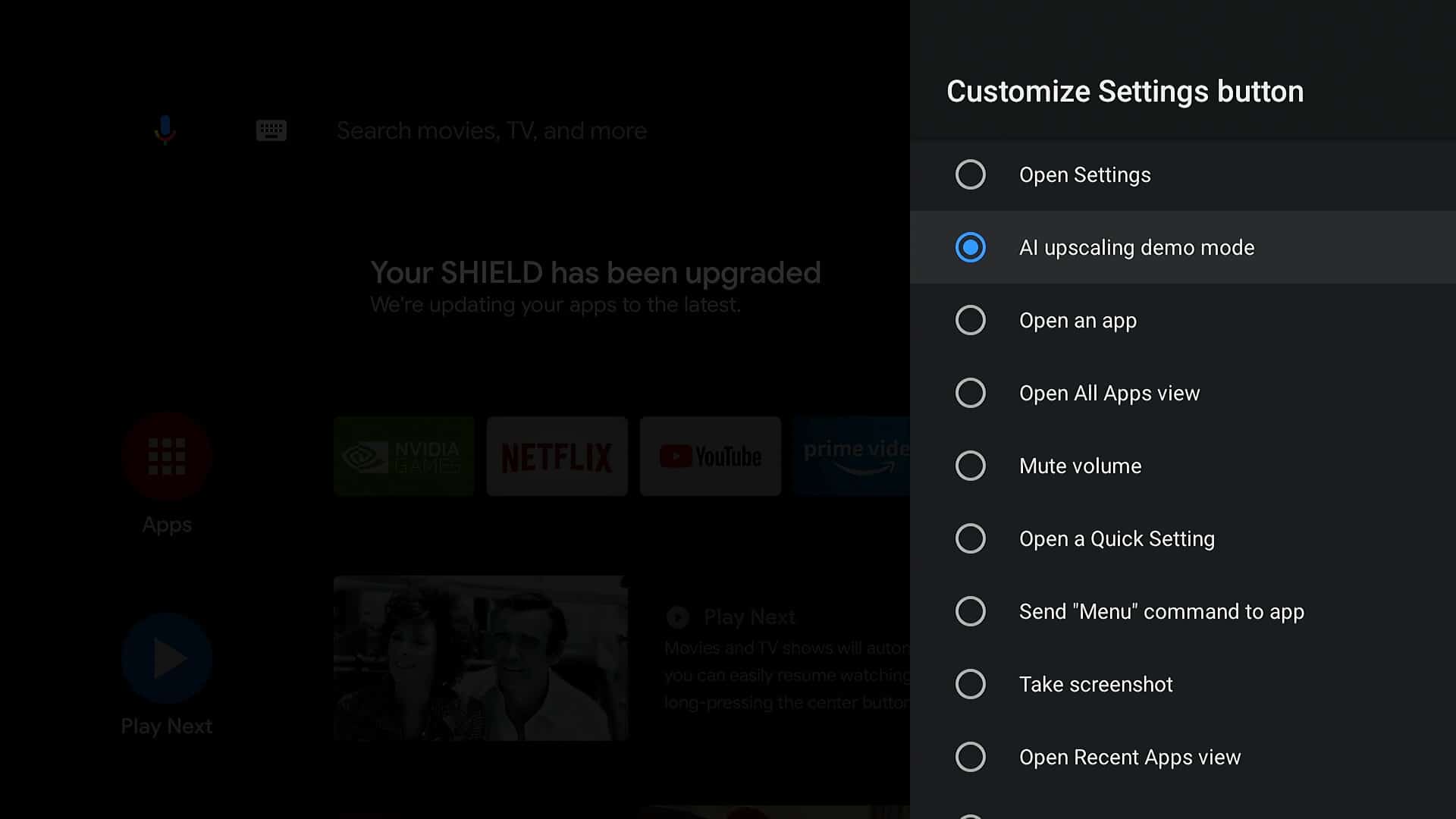 Same old software but with some neat tricks

We haven’t spoken much about the experience yet and that’s for two reasons. Firstly, limited time with the device means we have a limited view on the experience so far – we’ll look to cover this more in the review.

The second point is this is Android 9 Pie for Android TV. That means for the most part it is identical to the experience already on offer with the existing SHIELD devices. 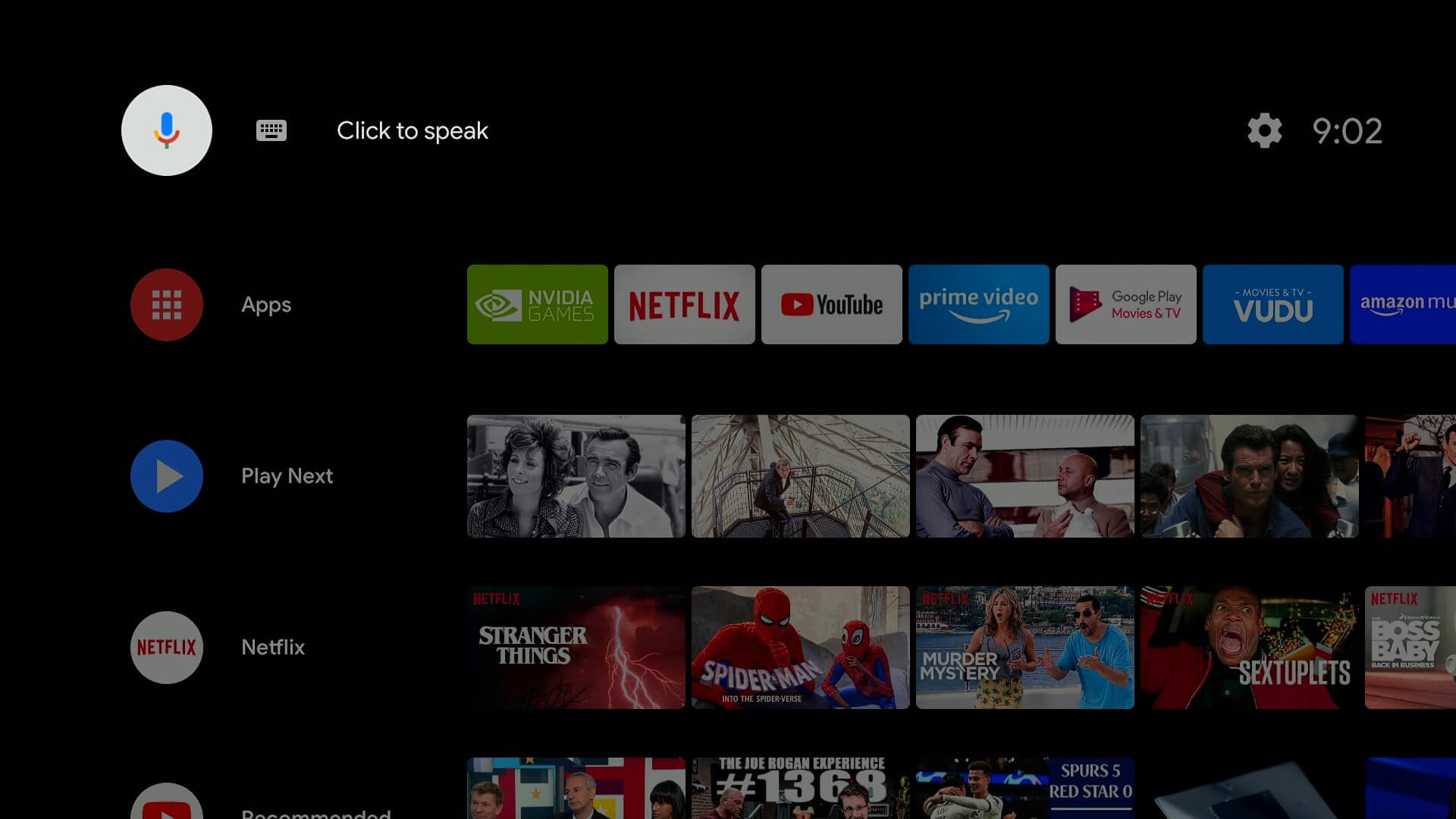 Yes, there are some new and neat tricks included but these mainly relate to the video quality. For example, the big software selling point is the new SHIELD supports Dolby Vision and AI upscaling.

Dolby Vision is a fairly understood feature now so that sees the new SHIELD keeping up with the current TV device release trends.

Upscaling is also a trending feature now and this so far has been the more interesting of the new features.

To briefly explain, NVIDIA says it uses typical upscaling technologies. However, where its implementation differs is those technologies are then coupled with an AI prediction technology. The end result is this AI-enhanced upscaling.

In more simple terms, NVIDIA says it can upscale content not just from 1080p to 4K(ish), but also from 720p.

This doesn’t mean all lower resolution content can be upscaled, but where it can be, it will be – when the feature is enabled.

AI upscaling is a smart addition to SHIELD TV

What's proven really interesting is the new SHIELD TV includes a demo mode where you can see this in action.

For me, the demo has become quite addictive and I find myself randomly using it far more than I need to. Basically, you can assign the remote’s shortcut button to launch the AI demo and then whenever you’re watching anything you can quickly see how the AI has (or has not) enhanced the picture.

Here’s an example of how the demo mode looks and the type of improvement it adds. 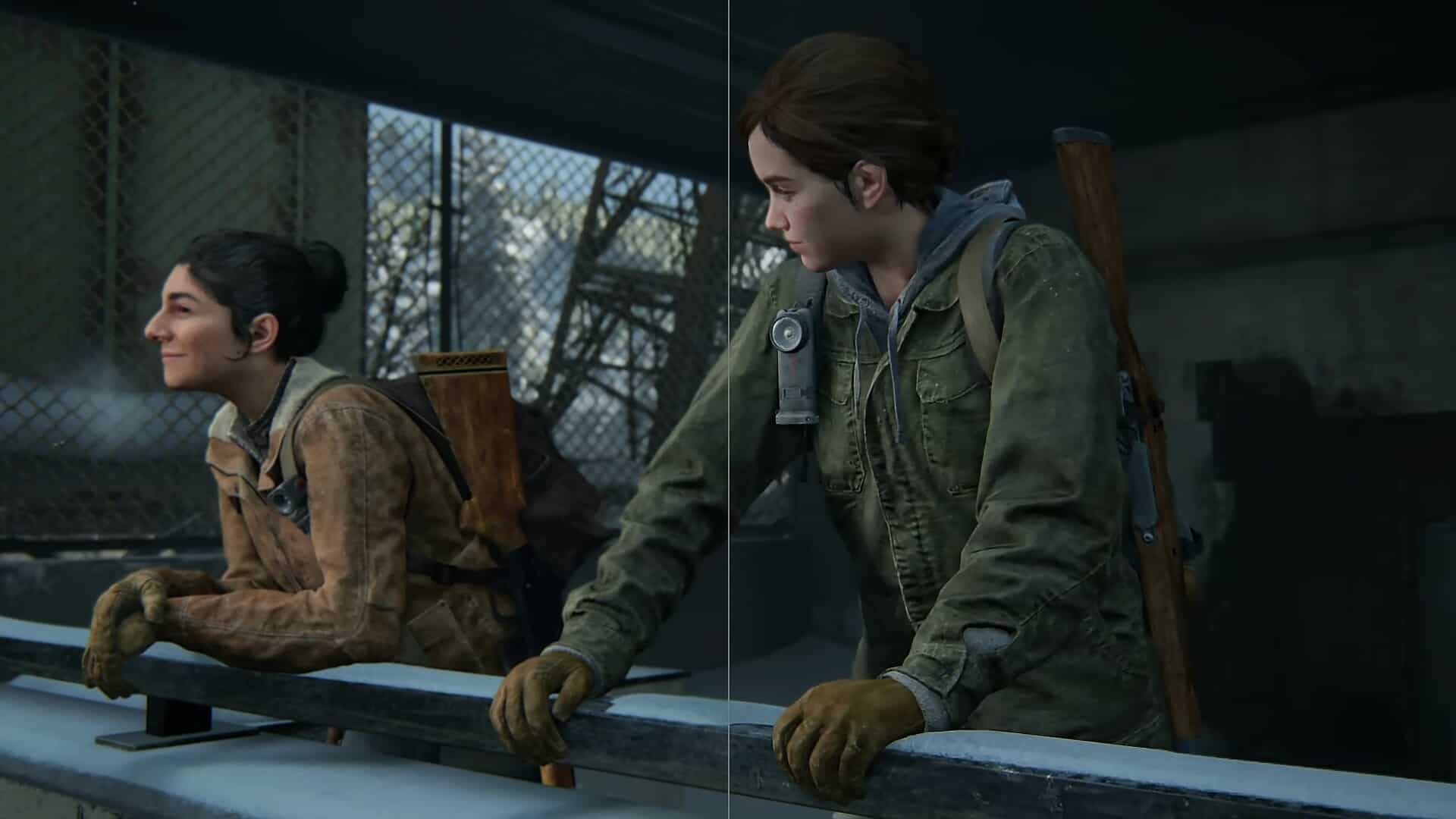 Again you can check the AI upscaling at pretty much any point when using the SHIELD so the mode works as a good feedback system. Allowing you to continually check what the SHIELD is doing to improve your viewing experience.

In instances where the quality is already as good as it can be (for example, 4K) the demo tells you it can’t upscale. 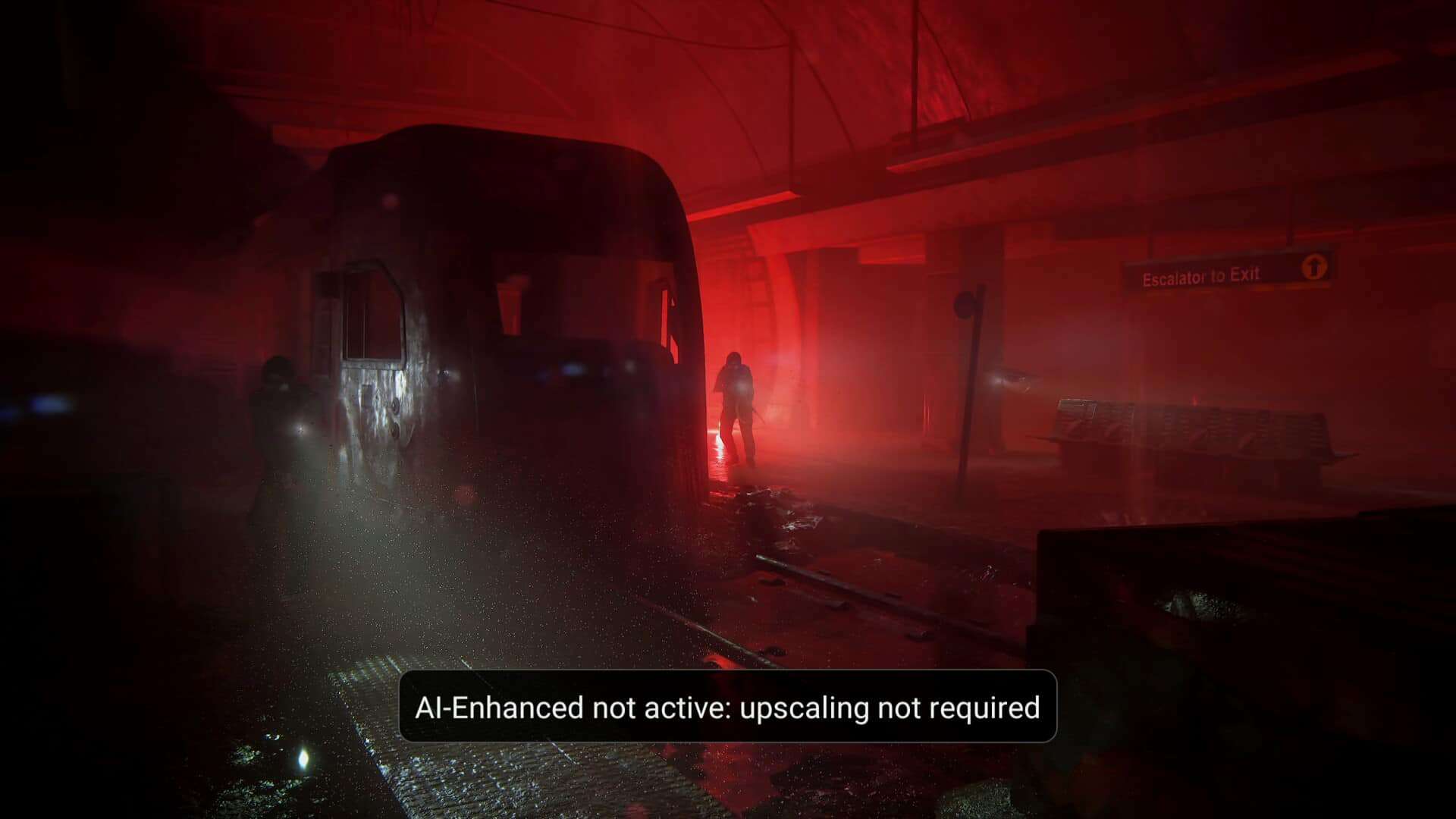 This alone seems to really drive home that the SHIELD's new AI upscaling is actually doing something. This is not simply a gimmick, it is actually recognizing when the content is of a sufficient enough quality, and only stepping in when it's not.

So what’s the (early) verdict?

It might be early times with the new SHIELD, but so far it appears to be yet another winner for NVIDIA.

NVIDIA has made it clear this particular SHIELD TV version is not for the enthusiasts. Although, as one myself, I’ve been more intrigued to play with this SHIELD compared to the previous ones. So while it might not be aimed at the more tech-savvy users, that’s not to say they won’t enjoy it just as much.

NVIDIA is simply looking to widen the appeal of the new SHIELD with a more compact (dare I say, more stylish), device.

In truth, besides the video improvements, the remote is arguably the big upgrade here. Although that's not necessarily enough of a reason to buy the new SHIELD. NVIDIA has already confirmed the remote will eventually be sold separately and is backwards-compatible with the older SHIELD models.