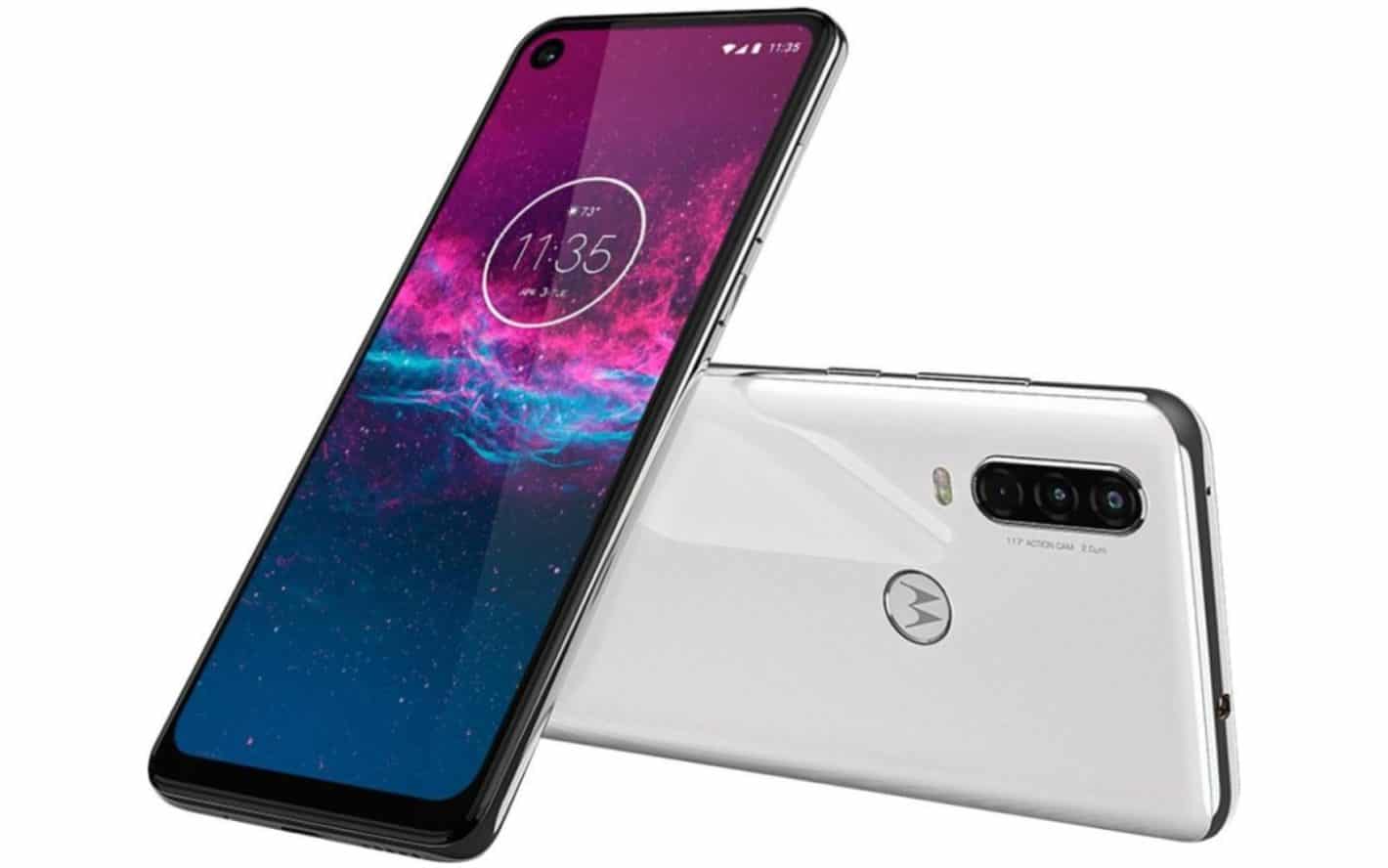 On the inside, Motorola equipped the One Action with a Samsung-built octa-core 2.2GHz Exynos 9609 chipset. That's backed up by 4GB of memory and 128GB of expandable storage. Motorola packed that into a glass and metal frame along with a 10W fast-charging 3,500mAh battery. The 6.3-inch Full HD+ CinemaVision display at the front of the device comes in at a taller-than-average ratio of 21:9.

At the top-left-hand side of that display, Motorola embedded a 12-megapixel front-facing camera. The company placed that in a hole-shaped cutout instead of using a notch or camera-raising mechanism.

The Motorola One Action differs from other Motorola One-branded handsets because of the cameras at the back of the device. But it also differs in terms of design with regard to those cameras. Those are arranged in a verticle strip instead of a circular housing nearer the middle. The center space is reserved for a fingerprint scanner.

The ratio of the phone is designed to go along with the cameras in that it allows shooting in a more cinematic fashion. That's because the primary snapper is a 16-megapixel camera with a 117-degree field-of-view. Additionally, that can be used with quad-pixel technology, allowing a 2um pixel size for low light shooing. Support is provided for a variety of ratios to match different media types. Those are 21:9, 18:9, and 16:9.

Secondary to that camera is a 12-megapixel sensor with a 1.25um pixel size. Finally, Motorola incorporated a 5-megapixel camera to handle depth-sensing and effects.

Motorola One Action isn't running Android One in the US

Contrary to how the Motorola One branding has been used in the past, this smartphone actually doesn't ship with Android One in the U.S. It does in other parts of the world. In that region, it's running a custom near-stock variant of Android 9 Pie instead.

Motorola hasn't provided details regarding the reasoning behind that decision, but there are several implications of that. The biggest of those is that Motorola won't be required by Google policy to provide updates over an extended period of time. That policy would force Motorola to provide security patches for three years in a timely fashion. Google also encourages at least two years of major Android firmware updates with the program.

Now, that doesn't mean that users in the U.S. won't see those updates. Conversely, it does indicate that Motorola won't be obligated to provide them in any sense of the word. In all other regards, the U.S. variant should be almost identical. Motorola hasn't detailed what other changes there might b. But the phone should offer a nearly 'pure' Android experience right out of the box.

Best Buy doesn't list shipment dates for the Motorola One Action. Instead, the site indicates that pre-ordered devices will arrive as early as on the day the phone releases. That's scheduled for October 31. But whether or not a pre-order arrives on that date is likely limited based on availability and exactly when the phone is pre-ordered. So those who want it to arrive on release day will want to order sooner than later.

Both Pearl White and Denim Blue versions of the gadget are available for just a penny under $350 at Best Buy. The store is also offering six-month financing at $58.34 per month. Another promotional offer put up by the store takes $50 off that price for those who pick up a "phone, SIM and refill card."

Best Buy indicates that the device will work with any major U.S. carrier or MVNOs operating on their respective networks.

Select other retailers such as B&H Photo have the device listed at just $299.99, as per a promotional offer from Motorola.