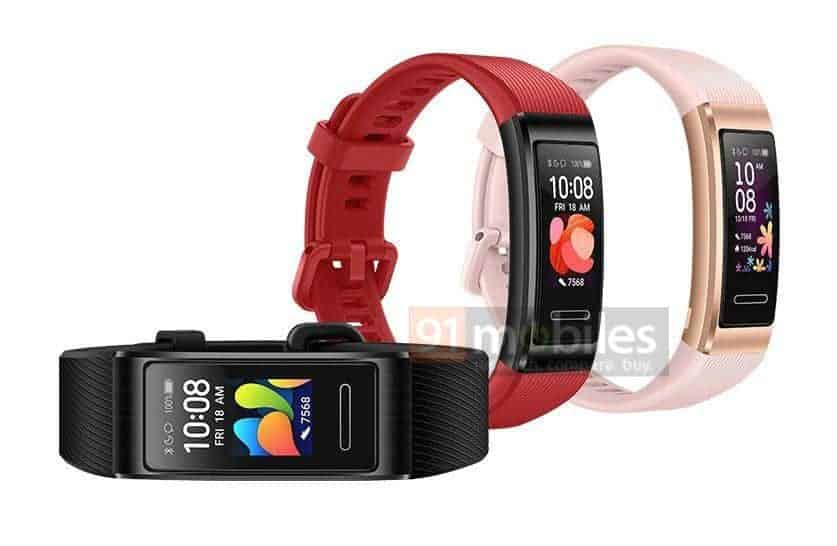 The Huawei Band 4 Pro has just surfaced in seemingly official renders. This image, with multiple renders, popped up on 91mobiles, and the source claims that they come from "reliable sources".

The Huawei Band 4 Pro will resemble the Band 3 Pro, based on these renders

As you can see, Band 4 Pro actually looks quite similar to its predecessor, presuming these images are legit. We have actually expected this design, as a patent filing for it surfaced last month.

This fitness tracker will feature a tall display, and will ship with a silicone strap, which will be removable. We're expecting it to feature an OLED display, just like the Band 3 Pro.

That display will not be entirely bezel-less, not at all. Its 'chin' will be quite thick, while bezels will be present all around the display.

The Huawei Band 4 Pro may arrive in some new color options, compared to its predecessor. The Red and Gold variants may become available, as these images suggest. The Gold model comes with a Pink strap, so it may be called 'Rose Gold' or something of the sort.

In addition to those two color options, the Black, and Blue models will also be available. The Black variant is shown with Red and Gold models here, and it's all black.

The device will include 10 new watch faces & great battery life

The Huawei Band 4 Pro will, allegedly, arrive with 10 new watch faces, on top of what was available on the Band 3 Pro. A heart rate sensor will almost certainly be a part of the package as well.

The SpO2 meter is also rumored. Its goal is to inform you of the amount of oxygen in your blood. The Band 4 Pro is rumored to ditch Huawei's charging connector, and use a USB port instead. That USB port is rumored to be covered by one of the two straps on the device.

Rumors are even claiming that we're looking at a USB-A port here, so you'll be able to plug it in directly to charge, without a cable. It remains to be seen how accurate this info is, though.

The device may feature a 0.95-inch HD OLED display, which will be touch sensitive. GPS will be a part of the package, and the same goes for TruSeen 3.0 for better heart rate sensing.

A 100mAh battery is rumored to be a part of the package as well. This device will be 5ATM rated, in other words, it will be waterproof. On top of that, dust resistance is also expected.

The phone's battery will, allegedly be able to keep this device going for 17 days of regular usage. That is a realistic expectation based on the previous model. The Huawei Band 3 Pro debuted in October 2018, so the Band 4 Pro will probably arrive soon.