Skip to content
Advertisement
Trusted By Millions
Independent, Expert Android News You Can Trust, Since 2010
Publishing More Android Than Anyone Else
23
Today
114
This Week
325
This Month
4382
This Year
114412
All Time
Advertisement Now that PS4 has been updated and Remote Play supports more devices, you might be wondering how to set it up.

With this handy guide, you’ll be connected and playing games in no time. At least, that’s the goal. There’s a few things you’ll need to do first before playing your favorite games on your mobile device.

With that, let’s get into the process if you’re unfamiliar, and are looking to use this new feature that was previously only available for Sony phones officially.

How to use Remote Play: Download the app first & update your console 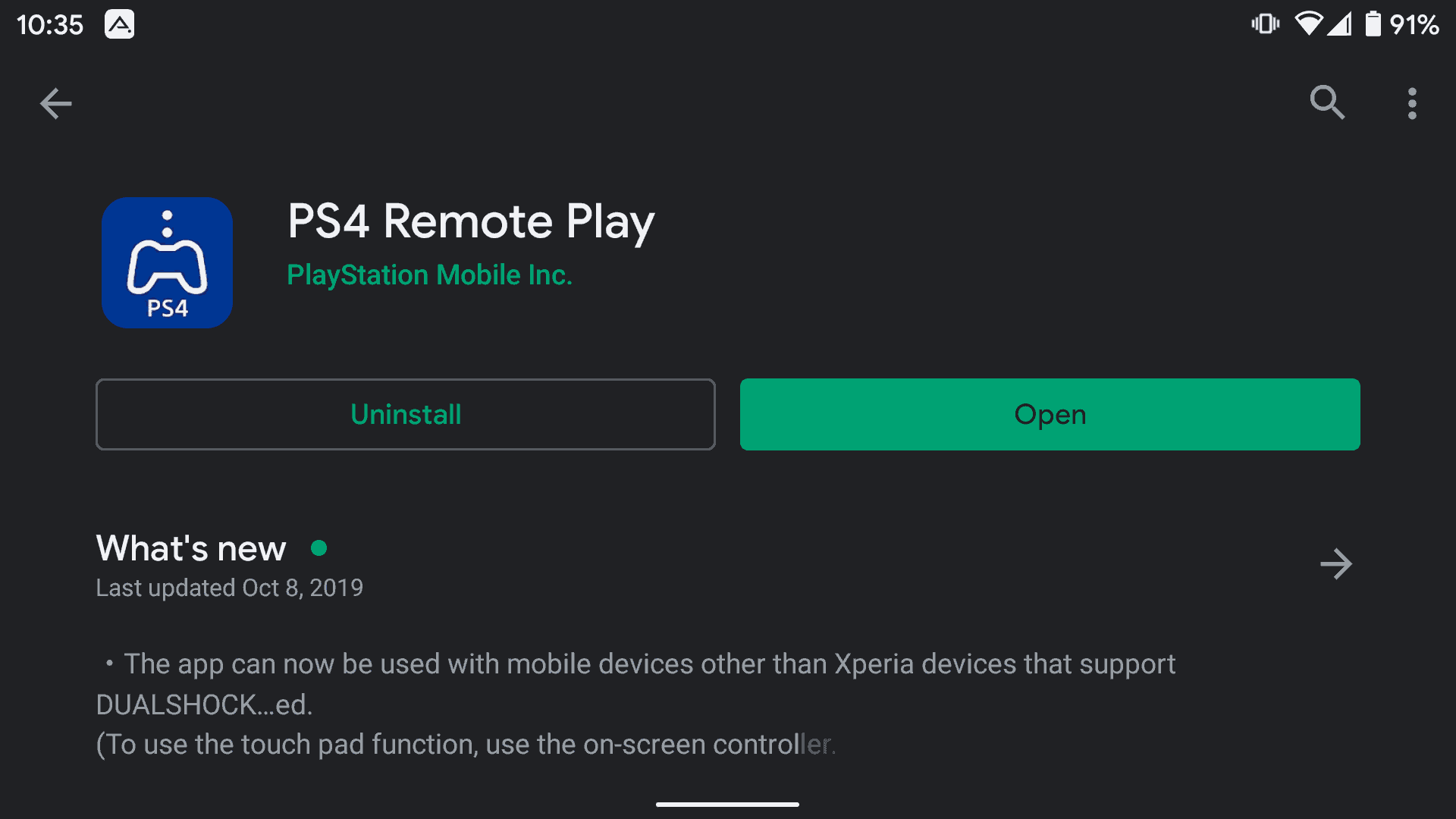 The first step is going to be downloading the app, or updating the console. Whichever one you do first, move to the other directly after.

Since the System 7.0 update is live for the PS4 console in the US, the Remote Play app should be live in the Play Store as well.

Open up the Play Store and type Remote Play into the search bar, then tap on PS4 Remote Play and hit the install button.

Make sure you update your PS4 console, then proceed to power on the system.

From here simply login and make sure the console is sitting on the main home screen, ready and waiting for you to connect your newly supported device to it.

Open the Remote Play app to get started 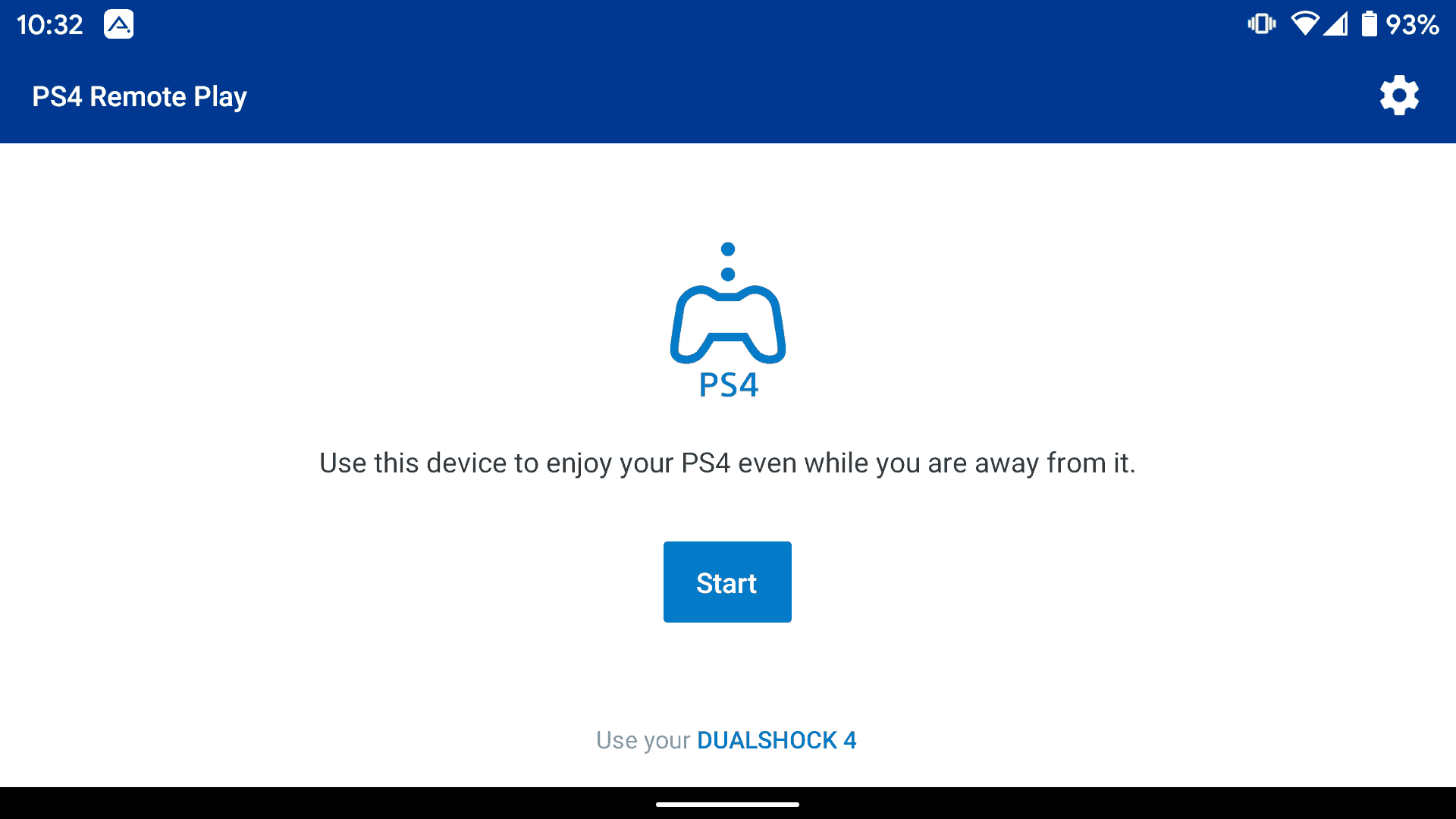 With Remote Play installed and the system updated, it’s time to open up the app. If your device supports the DualShock 4, there will be an option to use it. This will be on the first screen too, so you’ll know right away.

Just under the start button, you should see an option that says “use your DualShock 4.” If you don’t then your phone or tablet is not an officially supported device for the DualShock 4 controller. You can still use Remote Play though, you’ll just have to stick to the on-screen digital controls.

Select to use your DualShock 4 controller 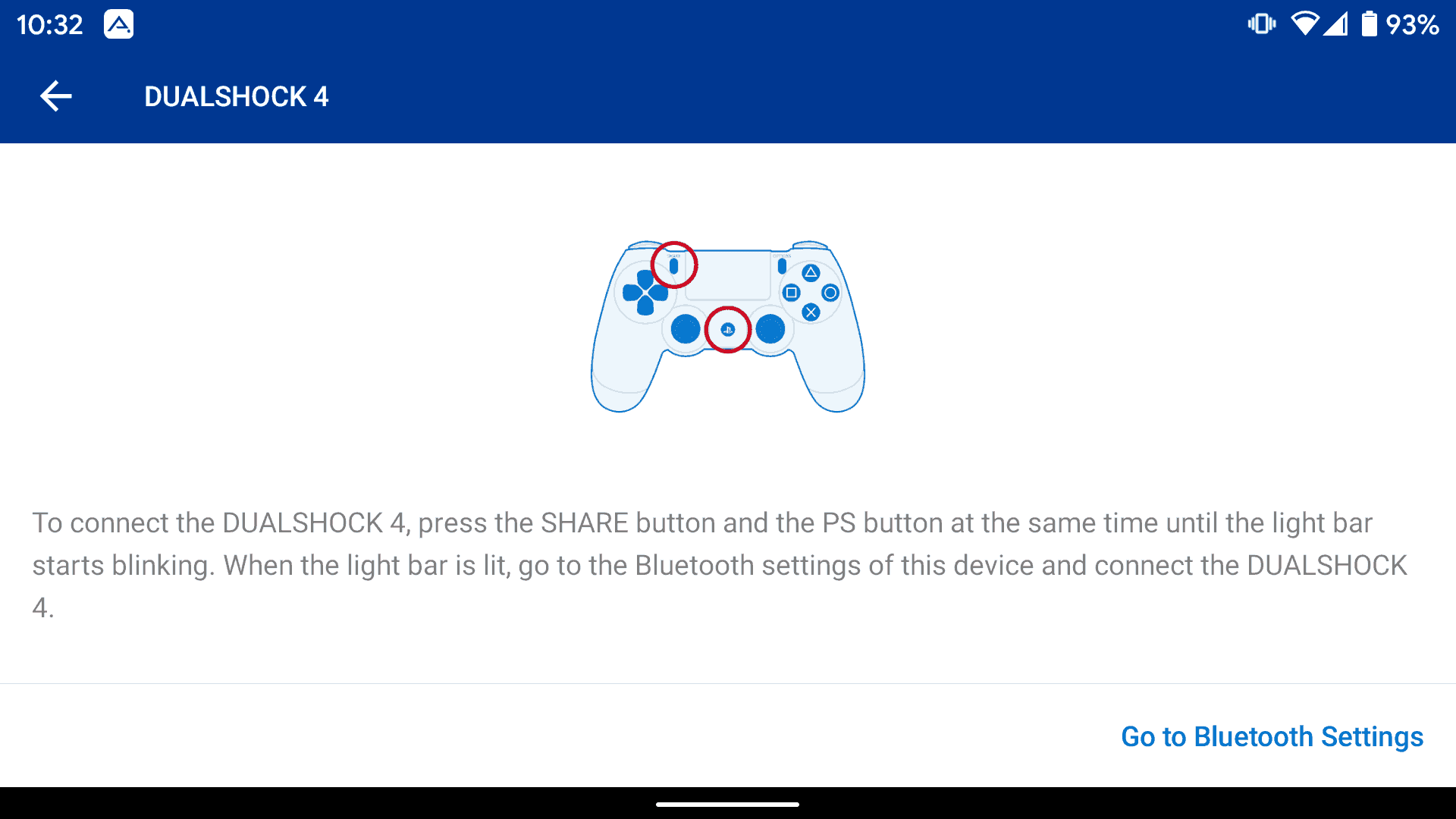 If your device does support the DualShock 4 controller for use with Remote Play, tap the DualShock 4 option. This will be a much better experience. After this you should see a screen pop up that looks like the image above. Connecting the controller from this point is simple and takes just a few seconds.

First, press and hold the Share button and the PS button at the same time as depicted above and hold them down. You’ll want to continue holding them down until the light bar on the top of the controller starts blinking. After this, tap the “Go to Bluetooth settings,” option in the bottom right corner of the screen.

Connect your DualShock 4 to your device 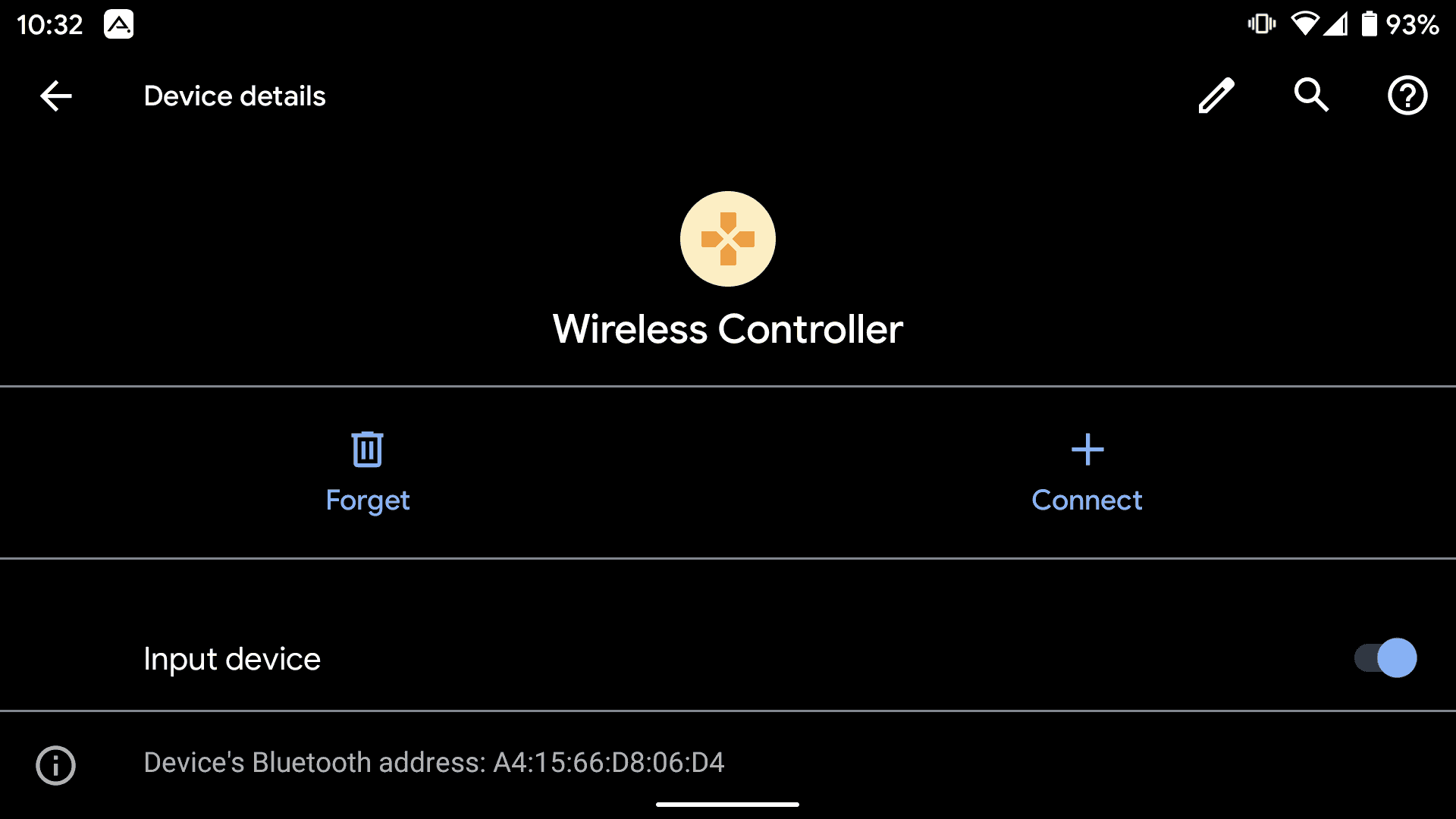 If you’ve made it this far then you can now easily connect the DualShock 4 to your device.

You’ll be in Bluetooth settings and since the controller will be in pairing mode, you should see the option to connect it to the phone in the Bluetooth devices that are available.

It’ll just be listed as wireless controller, though it will have the icon representation of the DualShock 4 dpad, so you’ll know it’s the right one. From here, just hit connect and it’ll do the rest. Connection should just take a few seconds. 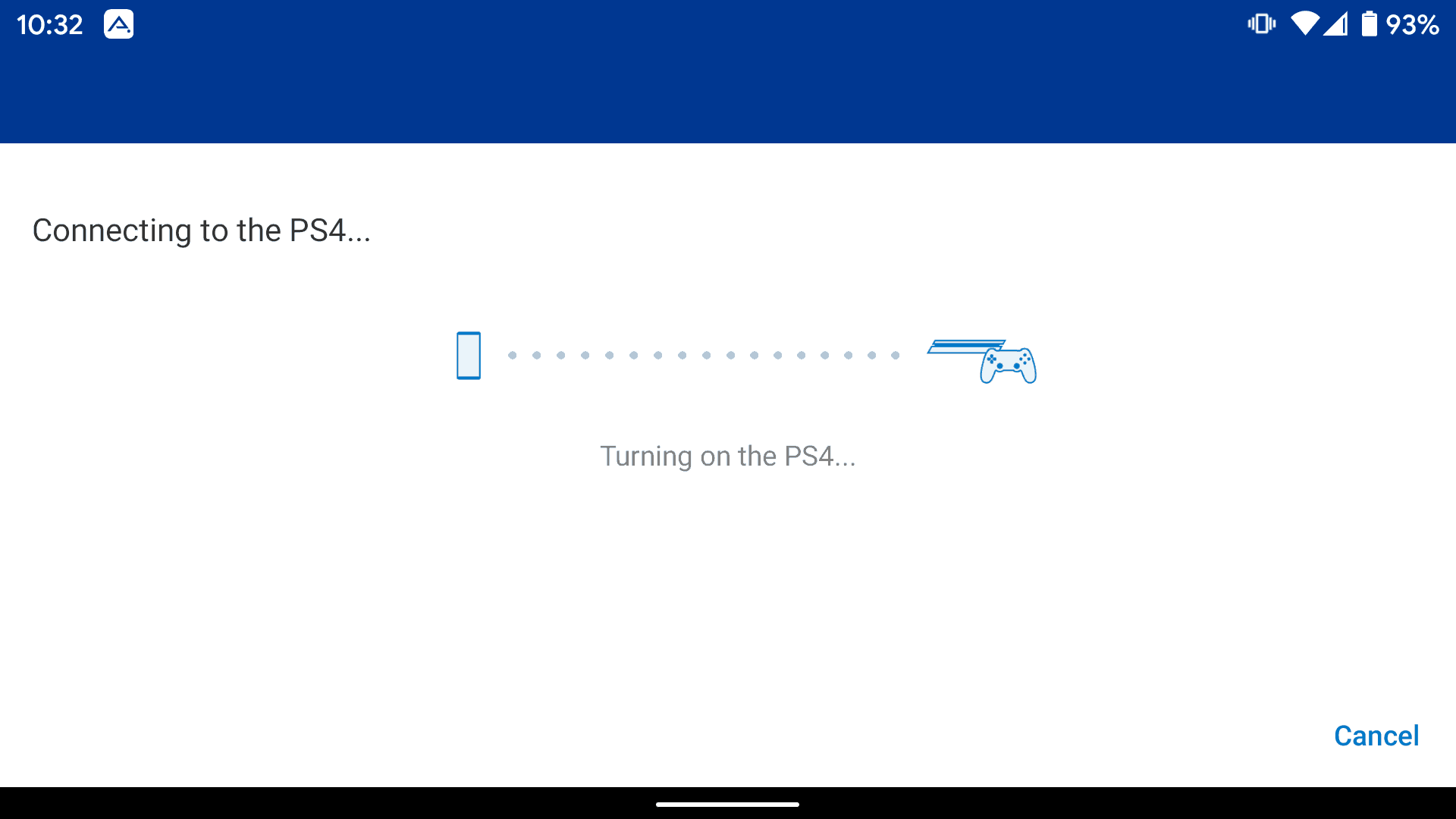 After the DualShock 4 controller is connected, you’ll be taken back to the start screen of the app. Now tap on the start button to allow Remote Play to start connecting. If your PS4 is off, the app will automatically turn it on for you. That being said, the console should be on if you’ve done all these steps in succession.

This will be useful for in the future though, as you can simply open the Remote Play app and hit start without having to touch the console. After the console turns on or if it’s already on, the app will start to search for the PS4 to connect to it. This could last for a few seconds or more but shouldn’t take more than a minute.

If everything was done correctly and the connection is good enough, the next screen you see will be the PS4 home screen on your device. You’re now ready to play. 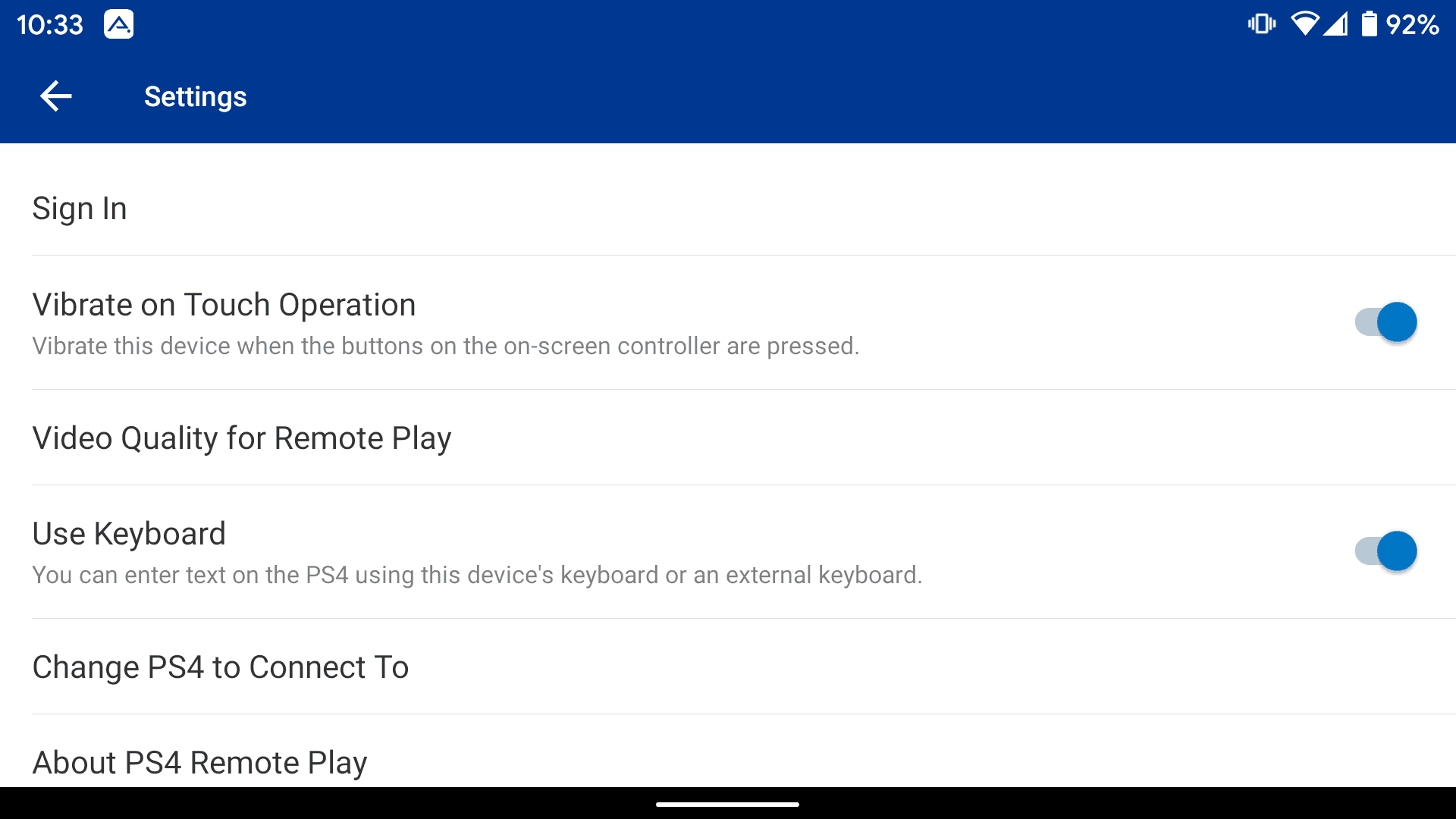 There are a few things you can configure in the Remote Play app settings if you want to. This mostly pertains to the on-screen digital controls though, and you will have to configure these before connecting. From the main Remote Play screen in the app, tap the settings button which will be the gear icon in the top right corner.

Here, you’ll see a list of options you can toggle like vibrate on touch operation and use keyboard, which will allow you to use the Android device keyboard for typing on the PS4 console.

This is also where you can change the PS4 that Remote Play is connected to. As well as what video quality you want Remote Play to have. Keep in mind that you will need a PS4 Pro to set it to 1080p.

Otherwise you will be limited to a few lower resolution options. These include 720p, 540p, or 360p. You can also change the frame rate here with standard and high options. And that’s all there is to it. Remote Play should now be set up and ready for you to use. All that’s really left is to link up and play some games.