Google is going to require a Digital Wellbeing app to be preloaded onto All Android devices in the future.

According to a new report Google wants all future devices on the platform to have the app installed out of the box. This would give users an immediately tool to help manage their screen time.

And thus, potentially cut down on how much they try to stay glued to their devices.

Google will require a Digital Wellbeing app of some kind

Google’s new requirements only seem to specify that an app be present. They do not note that it has to be Google’s Digital Wellbeing app specifically.

This means that some manufacturers can choose to use their own Digital Wellbeing solution if they have one. However, it has to either be a custom app solution that provides the same features, or Google’s version.

Some manufacturers already offer this type of feature baked right into their versions of Android. Such as Huawei. Many device OEMs do not, though. And that’s what this new requirement from Google is setting out to change.

Google is looking to make it easier for people to have a more healthy relationship with their connected devices. Part of that is making sure you’re not spending too much time on a phone or tablet.

This ensure time to disconnect and decompress. And otherwise live your life in the here and now by being present in whatever you’re doing instead of constantly refreshing your social feeds or checking emails.

The Digital Wellbeing solution has to have parental controls

Part of this new requirement is that the Digital Wellbeing solution have parental controls.

So while the app solution itself has to be on all devices moving forward, there also has to be a way for parents to have management control over this tool.

The controls will be there as such that parents will have a way to set limits for kids who have Android devices. Because, even if you make this app a preload requirement, it doesn’t mean kids will use it. If the app has parental controls, though, then parents have the power to set appropriate time limits.

Google’s new requirements state that any devices running Android 9 Pie or Android 10 after September 3 of 2019 are to meet this requirement.

What’s more is that any device which is updated to these two versions of software after that date are required to add this solution as well. This doesn’t just apply to phones either, but rather any device that runs on Android, including tablets. 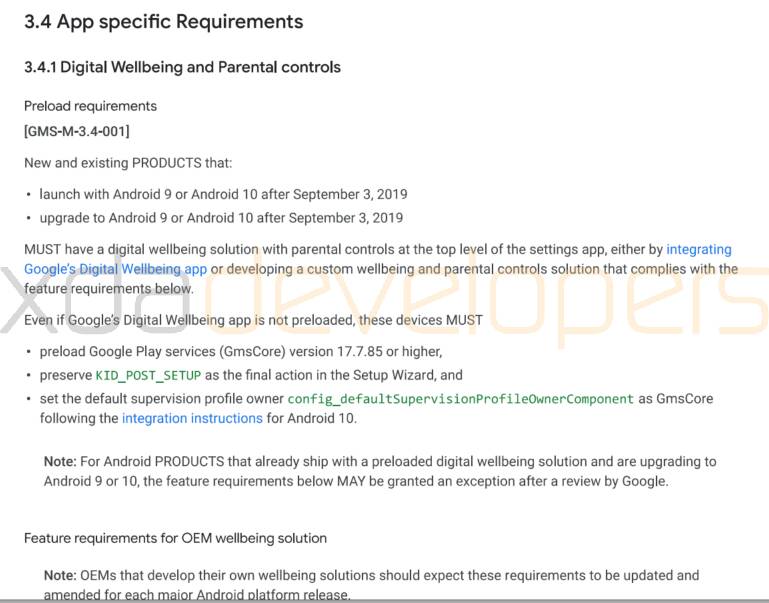