Considering a Google Play Pass subscription? Want to know what apps and games will work with Android TV?

We’ve painstakingly gone through every Play Pass app and game listing to check for Android TV support so you don’t have to.

What is Play Pass?

Play Pass is an app and games subscription service. It is Google’s latest attempt to get Android device owners to engage more with apps from the Google Play Store.

At launch, Google confirmed Play Pass comes with access to more than 350 apps and games. That’s free access, beyond the price of the monthly subscription. This means not only is there no cost to downloading a Play Pass app or game, but also no ads or in-app purchases after downloading.

To find out more about Play Pass, see here.

How much does Play Pass cost?

Play Pass is a subscription service priced at $4.99 per month. For that fee, Google provides access to more than 350 Android apps and games.

When the service first launched, early subscribers were able to sign up to the service for just $1.99 per month. This was a limited-time promotional price and the deal ended on October 10, 2019.

Promotional subscribers are locked into the discounted price for twelve months as long as they do not cancel their subscription in the meantime. Following  the twelve-month promotional period, those users will be rolled over to the standard $4.99 monthly price.

New subscribers do have the option to test out the service for free before deciding on whether it is the right subscription for them. Play Pass comes with a 10-day free trial.

To sign up for Play Pass you will need to open the Google Play app on an Android smartphone or tablet.

You will then need to click on the menu icon in the top-left corner of the screen. This will open the side menu where a new "Play Pass" tab will be listed below the "Notifications" tab. 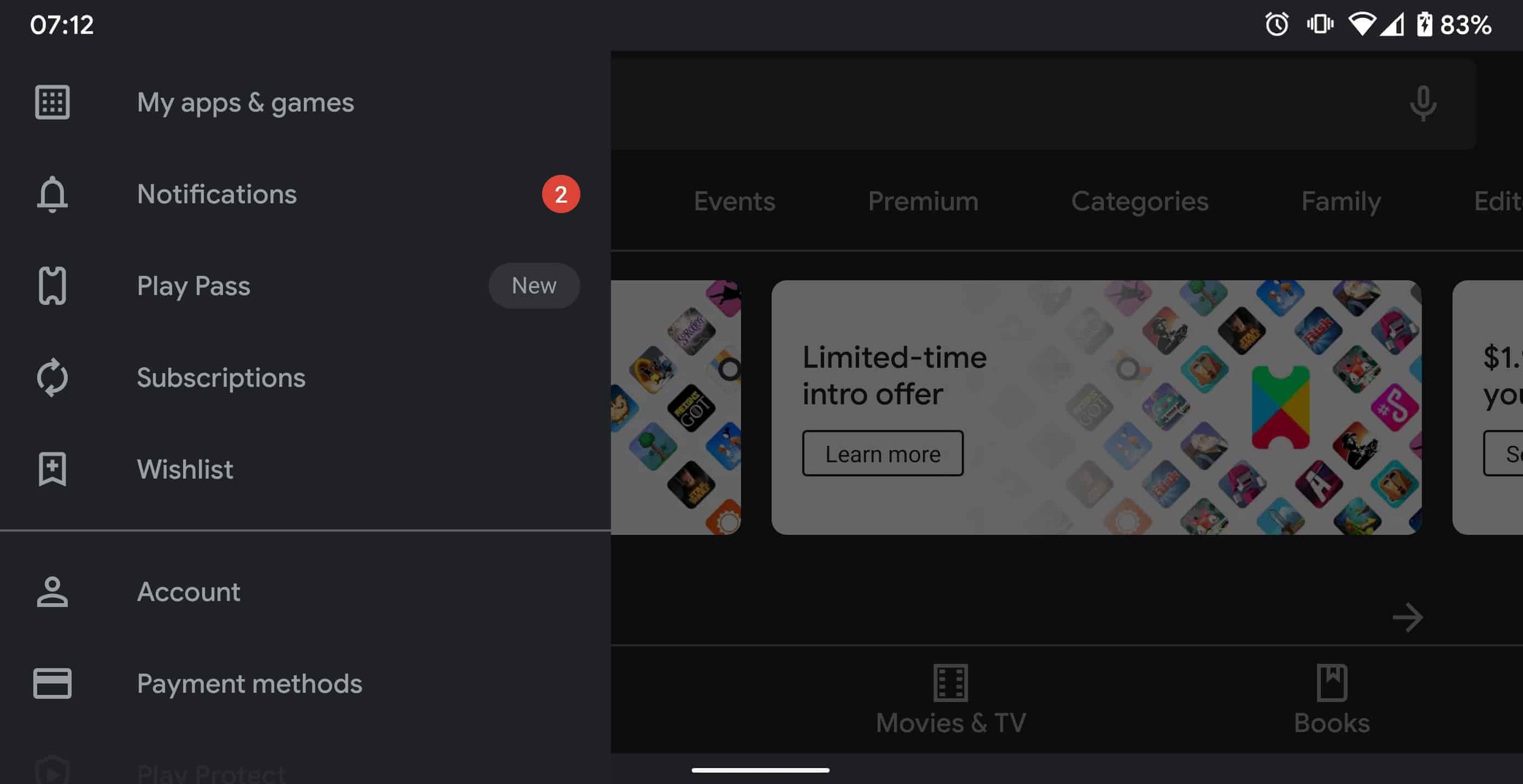 While signed into a Google account, clicking the Play Pass tab and following the on screen instructions will start the Play Pass subscription.

How Do I install Play Pass apps on Android TV?

Again, because Google does not support Play Pass on Android TV, this is not easy, but it is doable.

Play Pass is simply a collection of apps on the Google Play Store. Any app with Android TV support is unaffected by its inclusion in Play Pass. In other words, those apps still work fine on Android TV.

The first problem is without Android TV support, there’s no way of knowing what apps are available without manually checking them all. That’s where this list comes in.

The second issue is downloading those apps. Again, as Android TV is not supported, the Android TV version of the Google Play Store does not highlight any Play Pass games as Play Pass games. Therefore, you have two choices to install a Play Pass app on Android TV.

The first is to simply find a game you want from the list below, open the Android TV Play Store and manually search for the title. Once again, when the title shows up in the search results it won’t indicate that it’s included with Play Pass. However, you will see there’s no charge for downloading the app and that's the difference.

For example, Star Wars: KOTOR usually costs $9.99 but when a Play Pass subscription is active it appears on the Android TV’s Play Store as $0.00.

Downloading a Play Pass app this way will not incur any additional charges and is the easiest on-device method.

The second option is to simply click through any of the links below using a web browser. Whether on mobile or desktop, as long as you use a web browser to access the link, you’ll be directed to the app or game’s Play Store listing.

Here you’ll not only be able to see that the app or game is included with Play Pass, but you can also send it to your Android TV device.

To send the app or game simply click on the “This app is compatible with some of your devices” shown underneath the app or game’s title. A drop down menu will appear allowing you to choose which device to send the game to.

Select the desired Android TV device and the app or game will be installed on that device.

What Android TV apps and games are included with Play Pass?

Play Pass offers access to 100s of apps and games for free with a subscription. Generally speaking, the number of apps and games with Android TV support on the Play Store is extremely limited compared to Android mobile. That’s the same with Play Pass.

Below is a quick overview of the full list of Play Pass apps and games with Android TV support included. The download and in-app purchase prices are also listed. However, they are just for reference as these charges are offset by the Play Pass subscription.

Below is a little more information on each game as well as a direct link to the Play Store listing for easier downloading.

AccuWeather is a fairly popular app and one of only a few of the non-game Android TV options included with Play Pass.

The app offers live weather forecasts, as well as storm and severe weather alerts. All of course, with real-time updates.

Set underground, the game includes multiple modes including Deathmatch, Team Deathmatch, Capture the Flag, Conquest and King of the Hill. This game can be played in a single-player offline mode. Alternatively, there’s an online mode where up to 6 players can play either PvP or cooperative.

This as a puzzle game where you need to complete construction of a level through the use of bridges, ramps, slides and other tools at your disposal.

Chameleon Run is an auto-runner game. In other words, you won't have to control the main character as they will automatically and continuously keep running.

What makes Chameleon Run a little different to other auto-runner games is you have to switch color to match the color of the platform you’re running on or jumping to. That's the Chameleon bit.

Evoland is an RPG. However, it is also one that will particular appeal to game historians and aficionados, as well as general RPG lovers.

Jungle Adventures is a platform game in the style of Super Mario Bros. Instead of saving Princess Peach, you are Addu and tasked with saving your girlfriend.

The game offers in excess of 80 unique levels and is suitable for all ages.

If you haven’t guessed already, Jungle Adventures 2 is a follow up to Jungle Adventures. Although this time around the stakes have changed. Instead of saving your girlfriend, you’re now tasked with retrieving all the fruit stolen by the Magician.

While the same game style is in use overall, Addu has gained some new abilities making it a little easier to navigate the now more complex levels.

Lichtspeer is described as "a fast-paced lightspear-throwing simulator” and that’s exactly what it is. Your job is to simply throw spears as fast as you can to take out whatever comes your way.

It does have a few nice tweaks and the most notably is the overall 80s style in use. This is on purpose to give the game more of a retro and arcade feel.

If you’re a fan of the Marvel universe AND arcade pinball games, this IS the game for you.

myTuner Radio App is another of the very few apps with Android TV support included that’s not a game.

A nice way to add some additional radio streaming to your Android TV setup.

SAMURAI II: VENGEANCE is a fighting game by Madfinger Games.

This is actually a sequel to Samurai: Way of the Warrior – a game primarily only available on iOS. If you were a fan of that game, or wanted a newer Android version, then this is the one.

You can expect even more of the same hack ’n’ slash gameplay style, but with improvements throughout.

Space Marshals is a top-down shooter game. You are space marshal Burton and your mission is to hunt down the various fugitives who have recently escaped prison.

Expect the hunt to take place across a number of different terrains, and the gameplay to bounce between stealth and all-out shoot-outs.

Star Wars: Knights of the Old Republic, or more simply, Star Wars: KOTOR should need no introduction. This was a game that arrived on Android with massive anticipation and demand.

This is also a massive game in general which starts off with a massive download file. So depending on what Android TV device you have, you might want to take a moment before rushing to download this Star Wars role-playing game to make sure you have an adequate amount of storage available.

Who are we kidding! Hit the download button and worry about the storage later.

Suzy Cube is a 3D platform game for Android. There’s 40 unique stages on offer and you take on the role of Suzy Cube. Suzy is on a mission to recover treasure that’s been stolen from Castle Cubaton by those nasty Skulls.

This is a game that was widely applauded when it was released in 2018 and so if you like platformers, this is one to check out.

Thimbleweed Park is a point-and-click game but one where trusting no one is essential.

You play as five different characters who have all ended up in Thimbleweed Park on the same day. Besides dealing with all the local crazies, your job is to find answers to a variety of mysteries. The most important being who left a dead body under the bridge?

The Bug Butcher is a 2D action shooter. Pretty much all of the danger comes from above so moving out of the way and side-to-side is the name of the game here. That is, as well as taking out all the enemies before it's too late. To top off the action, this one is set in an “infested futuristic research facility on planet Zoit.”

Android TV users should take note: This one comes with a developer warning that states this game is not suitable for devices with less than 2GB RAM.

Wayward Souls is a top-down action-adventure game set to a dungeon background. The game only has thirteen monster and trap-filled areas but that’s only half the story here. This is procedurally generated game and therefore each time you start the game, it will be different.

In other words, this game is all about the replay value and there's lots of it. 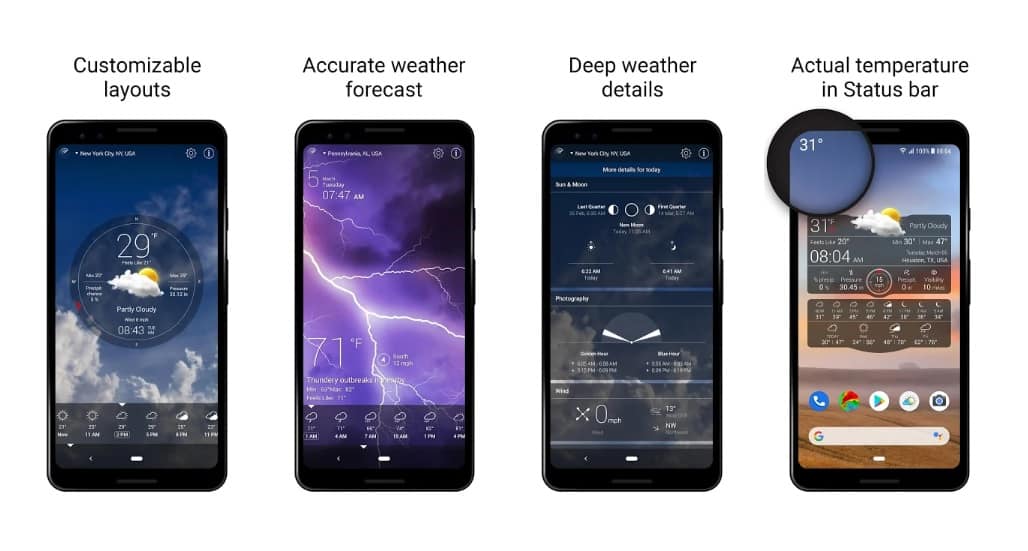 Like AccuWeather, Weather Live is another weather app. Although the main difference here is the aesthetics. In fact, the developer goes as far as to claim this is “the most beautiful weather app. Ever.”

Whether or not you agree, it does come with a variety of attractive and animated backgrounds for you to enjoy. That’s in addition to its primary purpose of providing real-time weather information and alerts.

This is a white noise generator and therefore its sole purpose is to add a single noise type to the environment. Apps like this claim a number of benefits, including the reduction of stress and an improved ability to sleep.

In total, there’s 40 different sounds to choose from, including crashing waves, lighter water drops, and more.