The Google Pixelbook Go was unveiled on October 15 at the Made by Google 2019 event. Like many of the company’s previous gadgets, the device represent a new direction for the company’s Chromebooks. But the search giant is taking an even harder line this time, following an announcement earlier this year that it would abandon the tablet form factor entirely.

Although there are some internal similarities, the latest set of devices represents a clean break from last year’s Google Pixel Slate. But it also abandons the 2-in-1 design of the original Pixelbook. The focal point seems to be placing this gadget as a competitor in the enterprise-ready and workstation spaces.

A trend has already emerged aimed at that market from leading Chromebook OEMs such as Dell, Acer, and HP. Subsequently, Google has positioned it Pixelbook Go as both a direct competitor and a guiding example to those. Pixelbook Go also takes on Windows and macOS devices designed for that space. Specifically, it’s taking on Apple-built laptops and Microsoft’s Surface devices.

More than that, Google is positioning Pixelbook Go to carve out its own niche among those. To that end, Pixelbook Go favors portability, durability, and productivity over a sleek facade and a fun stylus. Everything from the design to the internal hardware is set up to address that newfound purpose. 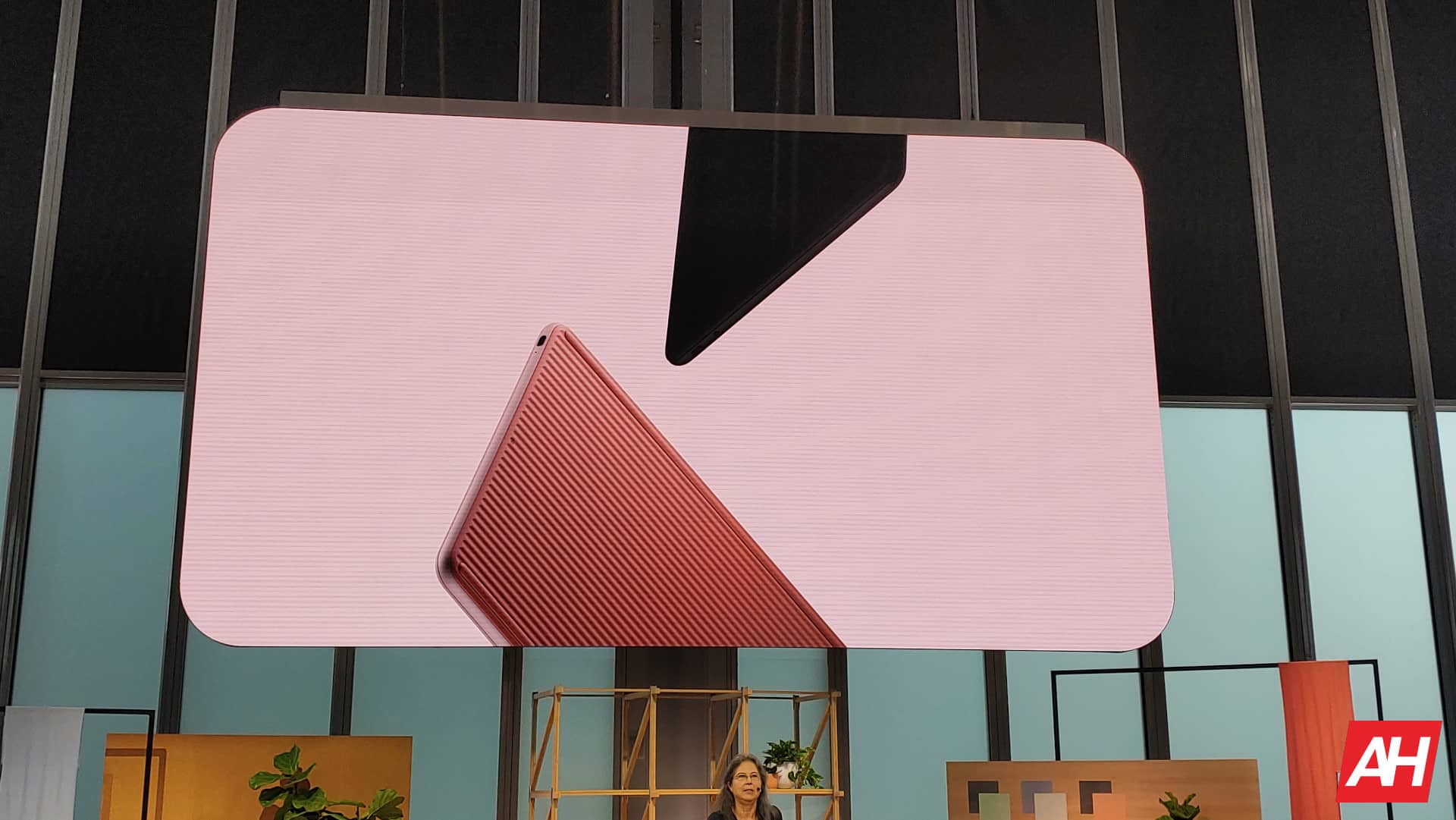 The overall design of the new Google Pixelbook Go is going to be a similarly momentous change to every other Pixel Chromebook launched so far. Google is stepping away from a 2-in-1 or tablet design in favor of a more solid frame.

The search giant is making drastic changes to exterior texture too. The top of each gadget is still going to be smooth — if rounder. But the bottom of the standard backlit keyboard is covered in a more industrial ripple texture to make accidental drops less likely. Because of that design change, Google moved its speakers as well. Those now sit in a slim column to either side of the Pixelbook Go’s keyboard.

The keyboard is designed to be quieter than ever and more comfortable via newly redesigned Hush Keys. The key layout remains the same, complete with a dedicated Google Assistant key on the bottom row.

Traditionally, the company has maintained a single color variation on its laptop and tablet designs. With the Pixebook Go, Google is releasing two color variations of the new design, not unlike it does with its smartphones. Since the frames are built of a magnesium alloy, the color is smoother and the entire build is lighter. Google Pixelbook Go tips the scales at just 2lbs.

Those appear to be inspired directly by Pixel phones. The laptop comes in either a “Not Pink” or “Just Black” configuration. For the former color, the tone is nearly white with a slight pink tint. Google accents that with a darker, almost rose color for the keyboard. For Just Black, the entire design is a matte black color with an almost identically colored keyboard.

Each variation of Pixelbook Go is made to get work done 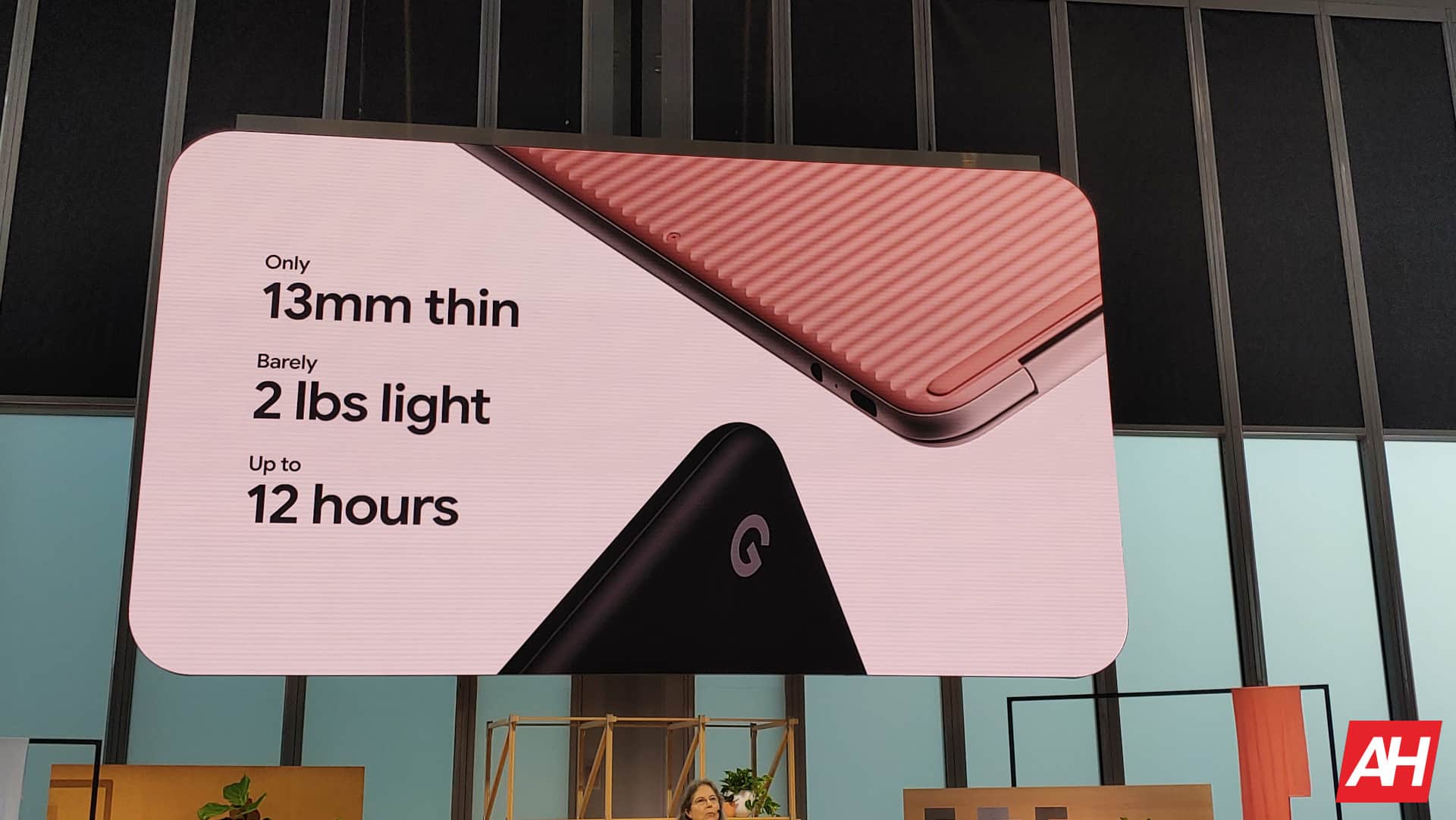 There are several versions of the new Google Chromebook to choose from. Available options include versions with either 8GB or 16GB of memory and 64GB, 128GB, or 256GB for storage. Google didn’t build in a MicroSD slot, so a USB-C thumb drive or external storage will need to be used if more local space is needed.

Wi-Fi 5 and Bluetooth are included while hardware security is backed by a Titan C chip. The latter of those is the same chip found in the Google Pixel Slate for security. It locks down personal data, including device data and passwords.

The battery powering that is 15-percent bigger than Pixelbook Go’s predecessor, allowing up to a claimed 12-hours of battery life.

If you’re looking for detailed spec information on the new Pixelbook Go, here you go.

Pixelbook Go variations extend to the outside 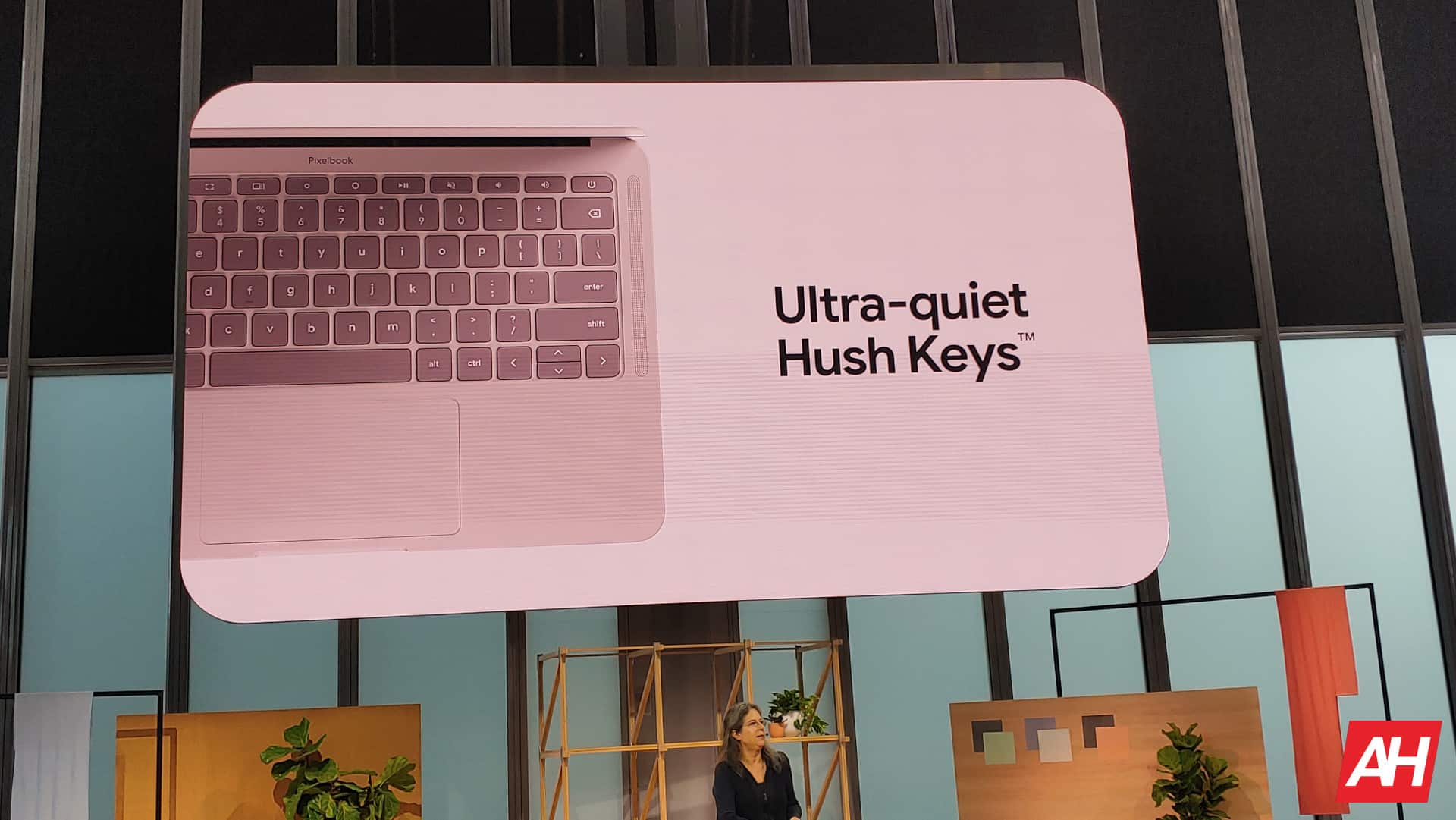 Google has a long-held tradition of keeping external and user-facing elements the same in its Pixel-branded Chromebooks. That’s something the company is breaking away from in order to better serve the needs of users.

The 4K-rated ‘Molecular Display’ found in the Google Pixel slate is making a return but not every device will ship with that. Instead, Google is also going to be shipping most of its devices with a Full HD resolution panel.

Above the LCD display, Google is including a 2-megapixel camera accompanied by two mics. The mics will not only assist in keeping video call clarity high. They also aid Google Assistant in precisely the same way that the multiple mics on a Nest-branded Home device do.

The camera itself is capable of capturing video at 1080p. That maxes out at a smooth 60 frames-per-second.

Around the edge of each device, Google is keeping the ports included in previous generations of Pixel Chromebooks. That means Google is giving users access to two USB Type-C ports and a 3.5mm audio combo jack.  Each of the former ports is capable of transferring data, connecting to an external display, or charging up the device. Both have their own LED indicator.

Chrome OS still the heart of the Google Pixelbook experience

Chrome OS here is still going to be the same as it’s always been on every Chromebook. That’s chiefly because it works like a kind of walled garden. So it’s not readily customized by OEMs and Google is in near-complete control of the whole thing.

The firmware is based on the Chrome browser and heavily web-centric. But Chrome is increasingly dependant on web apps, Android app experiences, and Linux apps too. Google includes Assistant AI right out of the box.

Aside from those attributes, a rapidly improving file management system, rapid startups, and built-in security set Chrome OS apart. So do management and interconnectivity for IT and EDU departments. Now, those are areas Chromebook sales are typically better-than-average. But they aren’t the only target audience here.

Regardless of whether it’s being used creatively, to get enterprise work done, or to develop apps, Chrome OS is a great operating system. With Pixelbook Go, users get the latest version of the software and security updates for years to come.

One of the biggest changes with Pixelbook Go is that Google has decided not to keep support for its Pixelbook Pen. That’s the active stylus that shipped as an add-on accessory to its previous devices. Google has kept touch capabilities for the display. Android and Linux apps will perform as they should and aren’t going to be impacted by the decision. But it’s an important change for those who may have hoped for a new active stylus with Pixelbook Go.

The company has revealed that partners working through the “Made for Google” program have laptop sleeves for Pixelbook Go. Those will explicitly be designed to work with the design and color scheme. Those include bags such as the Bellroy Slim Backpack for Pixelbook Go or Classic Tote shoulder carry bag for $129 and $99 respectively.

Privacy filters for the screen are also available from the Google Store for $38.99. 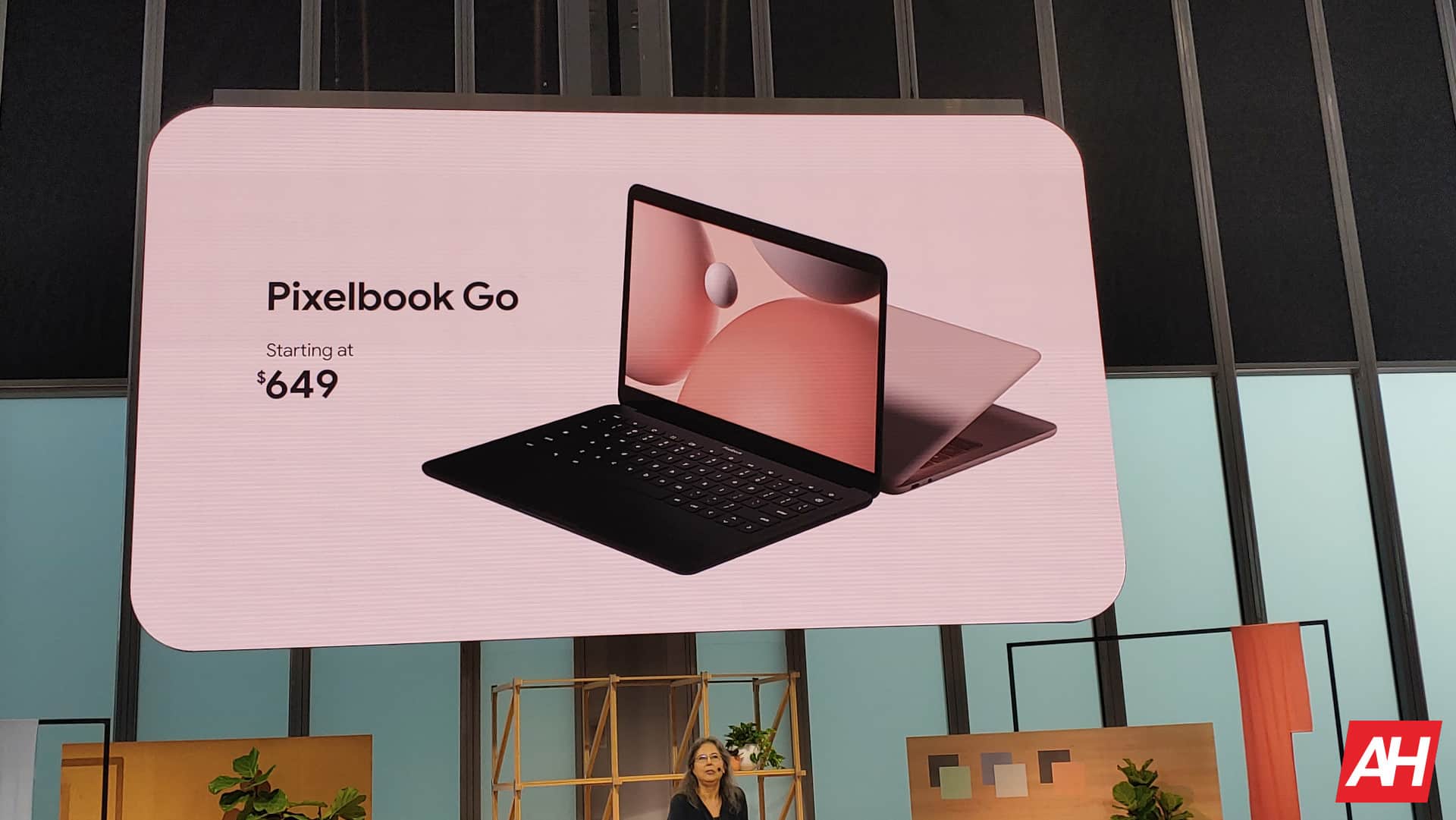 Google is putting up Pixelbook Go for pre-order from launch in the matte black Just Black coloration. That’s for buyers in the U.S. and Canada. Buyers in the U.K. will see the device’s arrival in January.

Pricing starts at $649, significantly more affordable than previous generations with consideration for the base hardware. That nets a buyer the Intel Core m3 variation with 8GB RAM, 64GB storage, and a Full HD display. The Intel Core i5 variants cost either $849 or $999, depending on the RAM configuration selected. Finally, the Intel Core i7 Pixelbook Go maxes out at $1,399.

The Not Pink variation of Pixelbook Go will become available in the near future. Google didn’t specify a date for the second variation but it will almost certainly fall into the same price range. That makes the newest Pixel laptop much more affordable than the original Pixelbook which started out at a price point around $350 higher.