Skip to content
Advertisement
Trusted By Millions
Independent, Expert Android News You Can Trust, Since 2010
Publishing More Android Than Anyone Else
39
Today
39
This Week
689
This Month
689
This Year
118542
All Time
Advertisement Google is reportedly working on a certification program for Android gaming devices.

The details have been discovered by XDA Developers. The site has recently acquired an updated version of the list of Google Mobile Services requirements for device manufacturers.

On this list of requirements it appears Google is taking a more focused approach towards mobile gaming.

A certification program for gaming devices is now mentioned

The report notes that this newly updated list is version 7.0 and was updated just last month. On September 3 to be exact.

The list contains a section that revolves around requirements for the Android platform that device makers have to meet. This particular section contains a subsection which covers the new gaming details.

More specifically it’s there to set guidelines for technical requirements that devices will need to meet. That is, if the manufacturers wish them to be certified as a gaming device.

Some examples of devices which would probably easily meet these requirements would be the ROG Phone II. Or even the Black Shark 2 Pro. Devices which were intentionally designed and produced to serve as gaming smartphones.

Considering the popularity of mobile gaming these days, it should be no surprise that Google is pursuing this. Especially with popular games like Call of Duty Mobile and PUBG MOBILE.

Google has listed out numerous requirements that it’s planning to have manufacturers meet. Among them are things like predictable performance. This would help developers so that when making games they don’t come up against issues like CPU throttling or “odd system behaviors.”

“Correct and high-performance GPU behavior,” is another requirement that Google is keen on having met.

Other more specific requirements state that a device has to support the Vulkan 1.1 3D rendering API. In addition to setting up this certification program, it also appears Google is working on putting together a team of people to work with OEMs on this certification.

Devices without a certification can still play games

Now, just because a device doesn’t have this certification doesn’t mean it won’t be able to play games. Even demanding ones like those listed above.

That’s because many of these games are optimized to work on multiple devices. Having this kind of certification though will no doubt help a phone look enticing to a consumer who is looking for a gaming device specifically.

If you’re looking for a gaming phone and have the choice between two options, one with a gaming certification and one without, you may lean towards the one with the certification. 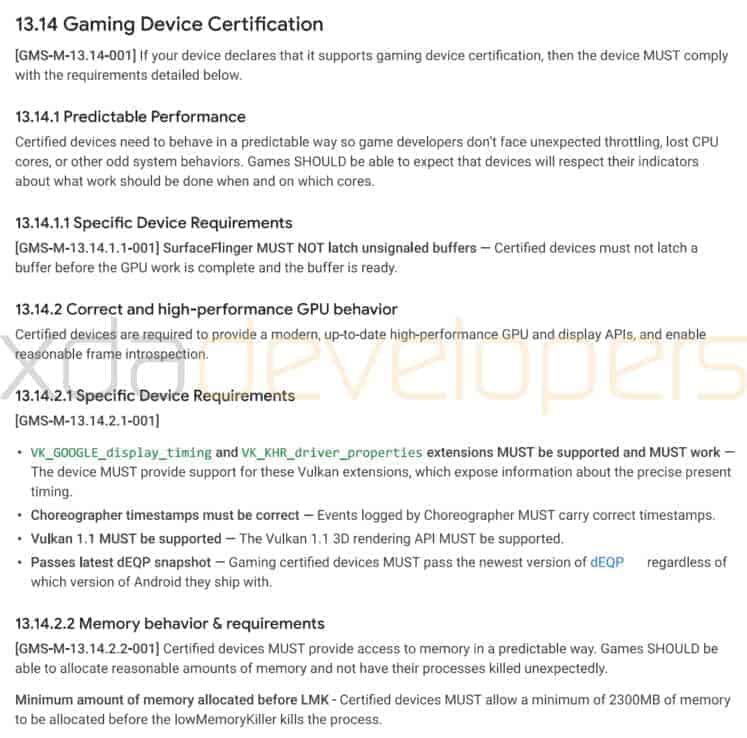