Skip to content
Advertisement
Trusted By Millions
Independent, Expert Android News You Can Trust, Since 2010
Publishing More Android Than Anyone Else
24
Today
95
This Week
541
This Month
5675
This Year
115679
All Time
Advertisement Call of Duty Mobile is already riding high, having reached 35 million downloads in just four days after its launch.

Within just one week since launch the game has surpassed a new milestone, pushing past the threshold of 100 million downloads. This is according to a new report from Sensor Tower.

It’s also worth remembering that this download number is totaled between both Android and iOS installs.

100 million downloads in a week is nothing to shake a stick at. On the contrary, it makes Call of Duty Mobile a force to be reckoned with.

This shouldn’t surprise anyone. Call of Duty is the best-selling FPS franchise of all time. And, while Call of Duty Mobile is free, it’s still riding on the good name of the series.

It’s also as close to a console/PC Call of Duty experience on mobile as players are going to get. For now. The game features multiplayer and battle royale modes, and will be adding a zombies mode in the future.

These features, along with the Call of Duty name and the rather stellar gameplay experience and quality, have put the hit mobile title on the radar of many gamers.

It’s the clear winner on mobile compared to other shooters

Most probably suspected Call of Duty Mobile would be a massive hit. How massive of a hit was anyone’s guess.

The download numbers help paint that picture now though. And it’s a staggering number when compared to other mobile shooters. In comparison, both PUBG MOBILE and Fortnite are behind by a huge margin. 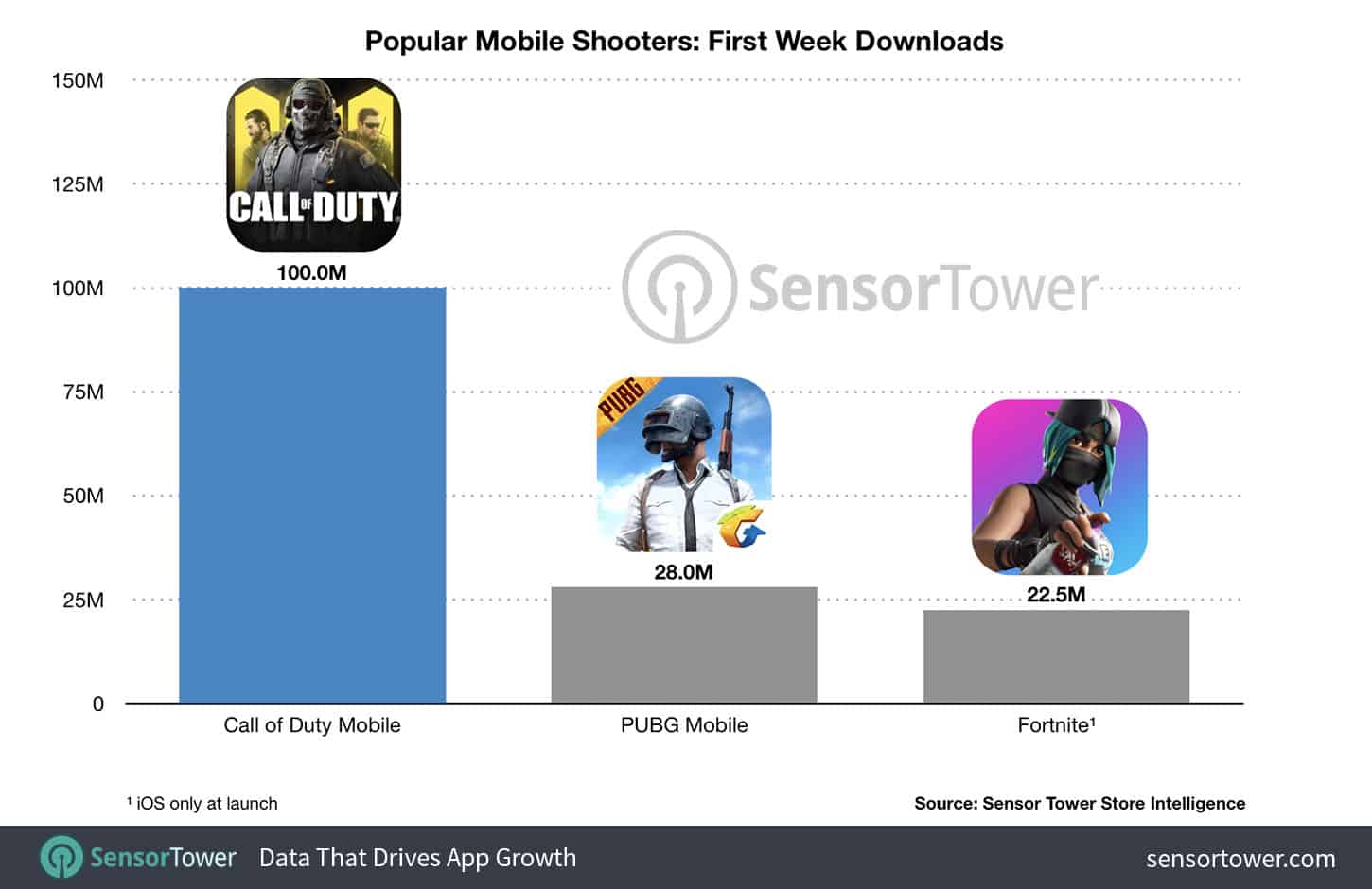 One thing to keep in mind is that Fortnite’s first week only counts downloads on iOS. This is because Fortnite still hasn’t launched on Android.

Even if it had though and Android made up the same exact amount of downloads, that would still put it at less than half of the first-week downloads of Call of Duty Mobile.

Activision and Tencent’s smash hit mobile FPS has even whizzed by Mario Kart Tour. By comparison, Nintendo’s latest mobile game reached 90 million downloads within its first week. This is a big accomplishment as well, especially considering the backlash it received over the micro transactions.

Nevertheless, it still isn’t enough to put it on equal footing with Call of Duty Mobile. It’s close, but not quite there, which really showcases a couple of things. One, Call of Duty is still just as relevant as ever, even on mobile.

And two, mobile gaming is much more popular than people give it credit for. The amount of money that players spent within the game was more than competing games as well. With CoD Mobile reaching a total of $17.7 million across Android and iOS. This is more than Fortnite’s $2.3 million, and much more than PUBG MOBILE’s $600,000. Interestingly enough, PUBG MOBILE is also a game published by Tencent.