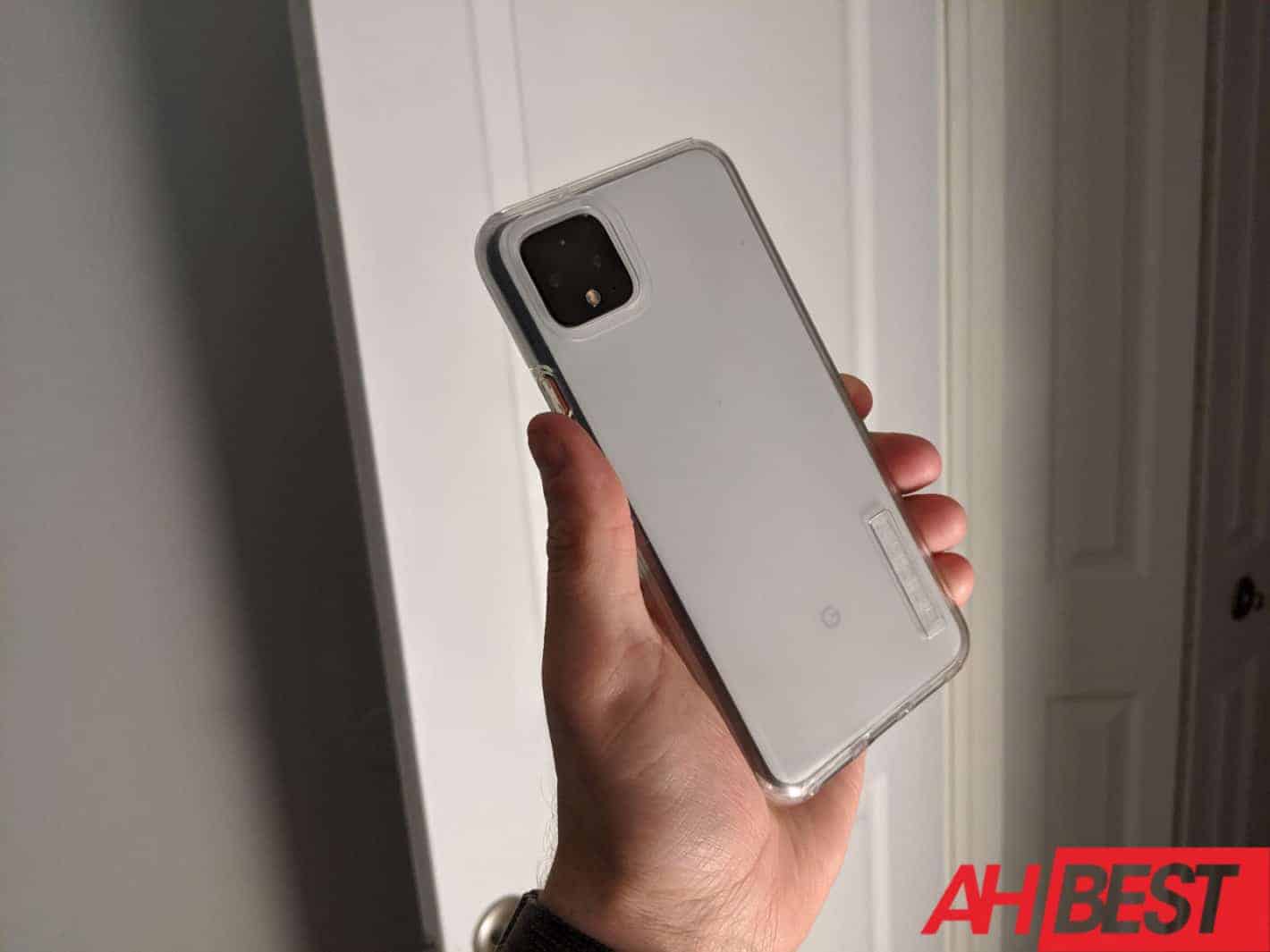 Picking up a clear case for your Pixel 4 is definitely a good idea. It’s going to allow you to still show off that interesting design and color scheme of the Pixel 4, while still protecting it. Especially if you picked up the Clearly White or Oh So Orange colors. Which have those pretty cool looking power buttons too.

But how do you know which case is going to be the best for your Pixel 4? Well we are rounding up the very best in the category of a clear case for the Pixel 4, and here’s what we’ve found.

Caseology’s Skyfall is another fan-favorite case, and it’s one of the best available for the Google Pixel 4.

It’s essentially a bumper case with a clear backside. This is going to allow you to still showoff the color of the Pixel 4 that you picked up, while still being able to protect it.

This one isn’t super thick either, so it’s going to be great for protecting your Pixel 4, without adding a bunch of bulk to it. There’s a slight lip to this one too, so it will protect the display. There’s no button cutouts, but the buttons are tactile, so they are still easy to press. Of course, that’s a very important thing with a smartphone case.

The Caseology Skyfall case for the Google Pixel 4 is available now from Amazon for just $13.99.

Clear cases have become pretty popular in recent years, and it’s not hard to see why. These allow you to still show off the design of your smartphone, while protecting said smartphone.

Matone has a really good one available for the Pixel 4, and it’s super cheap too. We’re looking at about $8 for this one. But it’s a crystal clear case, that is going to show off that color of the Pixel 4 or Pixel 4 XL. It also covers the sides and has a lip for the front of the phone. Allowing you to keep that beautiful OLED display intact.

There is a slightly thicker bumper on the corners of this case. This is to protect it from breaking when it is dropped. Since phones almost always land on their corners when they are dropped, this is a good thing. Giving you some extra protection.

You can pick up the Matone Crystal Clear Slim Case from Amazon for $7.99, by clicking the link below.

This one from TopACE is similar to the Matone one above, but the only difference is the fact that it is much thinner. So if you’re looking for a case that isn’t going to be super bulky and add more weight to your Pixel 4, then this is the best one to get.

It’s a pretty thin case, so don’t expect it to offer a ton of protection. There isn’t much of a lip on this one, so if you drop it, you may not be able to keep your Pixel 4 from shattering. There aren’t any cutouts for the buttons either, but they are still very easy to press.

TopACE says that this case is as light as a feather, so if you were worried about getting a case that might be pretty heavy, then you won’t need to with this one. It is also still compatible with wireless charging. As are most cases on this list.

This case from TopACE is a really good option for those that still want to show off the design of the Pixel 4, still want to protect it, but don’t want to make it super bulky. You can pick up the TopACE TPU Cover from Amazon by clicking the link below, it’s currently just $6.99.

The Temdan Clear Case is just that, a clear case that you can use to protect your Pixel 4 smartphone.

It’s an anti-scratch and anti-slip transparent case that’s going to be good for protecting the Pixel 4, while still allowing you to show off the design of the smartphone.

The Temdan Clear Case is a pretty decent clear case and you can pick it up for just $10 from Amazon using the link below.

This is another fan favorite, when it comes to smartphone cases. The Spigen Ultra Hybrid is a really good looking case from Spigen, that is also a clear one.

The Spigen Ultra Hybrid might just be the thickest clear case on this list actually. And it’s for good reason. This case has reinforced edges and corners, which is going to allow the case to take more of the bumps when you drop your phone. This means that the case takes the damage instead of your phone. And since phones almost always hit the corner on the ground instead of falling flat, this is a good thing.

There’s also a nice lip that goes over the display to keep it protected when it is dropped as well. Since this is a thicker case, there are no cut outs for the buttons available here. Instead you get rigid buttons, which does make it easier to use, and press the power button.

The Spigen Ultra Hybrid is going to cost you $11 right now, and you can pick it up from Amazon by clicking the link below.

The ESR Mimic Case is another great case for the Pixel 4. And at launch, it is on sale, and discounted pretty heavily. Making it super cheap.

This case has a tempered glass backside. So unlike many of the other cases on this list, the ESR Mimic Case is actually a hard case. Instead of a soft TPU case. By doing this, ESR also made it less prone to getting scratches from using the phone. Since it’s glass versus plastic.

Of course, the most important aspect of this case though, is that it does protect the Pixel 4. That’s what is the most important thing with any case. And it does that quite nicely. It will cover the entire backside and all the sides of the phone. There is also a nice lip that does well at protecting the display too. That’s also important, because if you drop your phone, chances are, that display is going to shatter.

You can pick up the ESR Mimic Case for your Google Pixel 4 or Pixel 4 XL by clicking the link below. It’s going to cost you $18.99.

The Inicipio DualPro is another clear case that’s pretty good for the Pixel 4.

It’s a dual-layer case that will provide a ton of protection for your Pixel 4. It has a soft inner layer that protects the phone. And then a hard-shell on the outside that will protect your phone if it does fall out of your hands. The DualPro is a pretty thick case actually, but it does its job, of protecting your phone quite well.

Typically, this is not a clear case, but this year for the Pixel 4, Incipio is offering the DualPro in a clear option, as well as a black option. Which is why it is on our list here.

You can pick up the Incipio DualPro from Incipio by clicking here, it’ll cost you $29.99.

The Spigen Liquid Crystal is an inexpensive and pretty thin clear case for both the Pixel 4 and Pixel 4 XL. This is going to allow you to show off the design of the Pixel 4, without having to worry about it adding a ton of bulk to your smartphone. That is a really important aspect of a case too.

Not everyone wants something that is super thick and going to make their phone larger and heavier. Some want something that will just give them more grip to hold onto their phone. And the Spigen Liquid Crystal does just that.

It’s a good looking case that is going to keep your Pixel 4 protected pretty well, without making it even larger. And that’s a big deal, especially on the Pixel 4 XL, which is already a rather large smartphone.

You can grab the Spigen Liquid Crystal from Amazon by clicking the link below, it’s priced at $9.99.