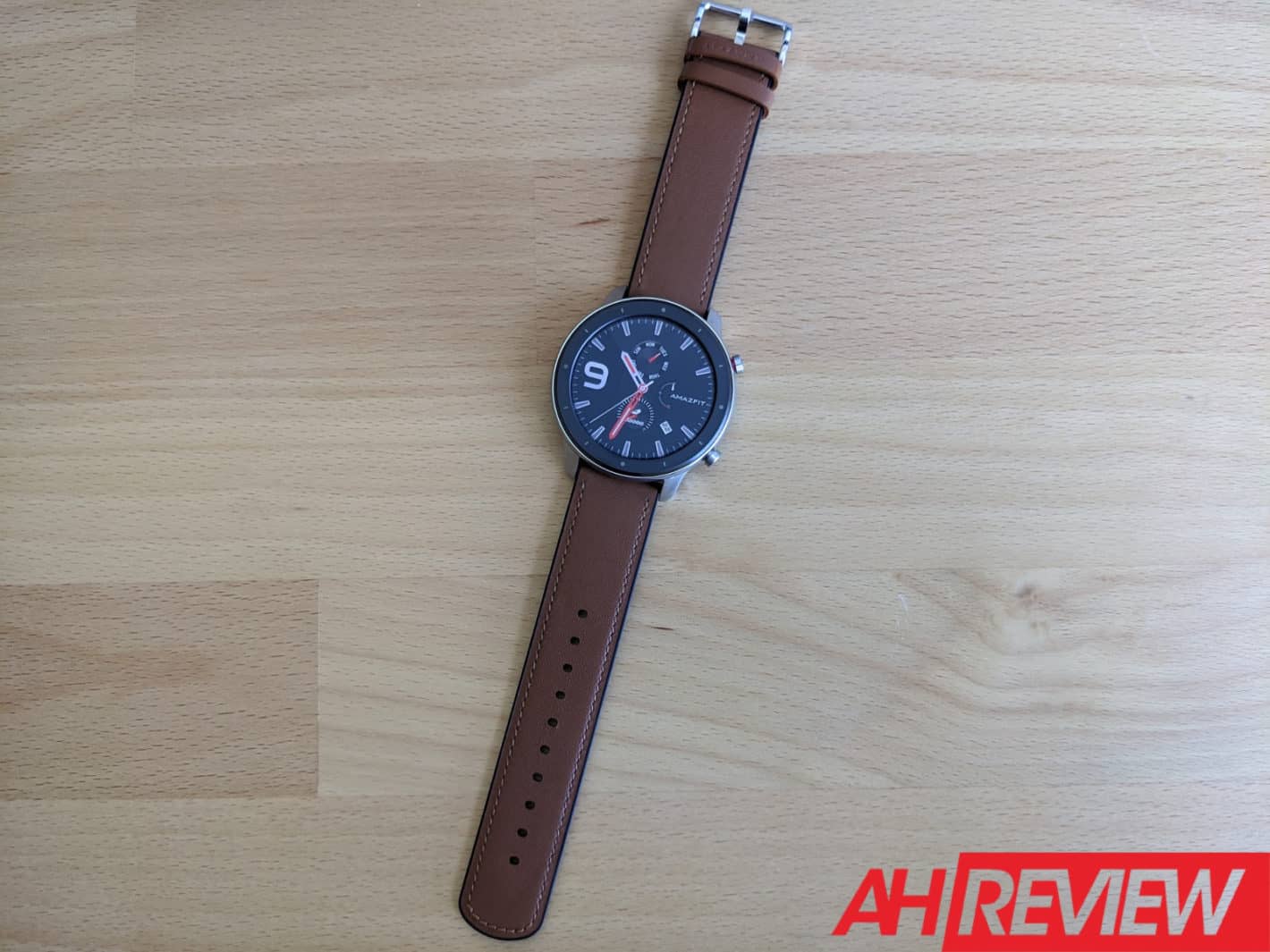 The Amazfit GTR is a smartwatch everyone should consider over more expensive options.

Amazfit is not a newcomer to the smartwatch industry and that’s very apparent with the GTR after a review of the device over the past few weeks.

As a wearables brand, Amazfit may not have the mind share that Apple or Samsung have. However it certainly has the market share and then some. Its latest offering to date, the GTR smartwatch, shows just why the Xiaomi-backed company is the leading brand in the wearables market for wrist worn devices.

Coming in at under $200, it looks more expensive than it is. And it offers plenty of features you’d get with many other smartwatches. The Amazfit GTR is not perfect, but it is a perfect balance of style, function and cost. And that says something. Because with a smartwatch there are so many things that could potentially go wrong.

Yet there’s not much to gripe about with the GTR. In fact, one of its only downsides is the lag with the display. This pops up when opening or sifting through the GTR’s different screens. It’s something that users will probably take notice of, and that’s definitely something that’s a bit of a letdown. The lag isn’t crippling though, and everything still performs as intended.

And to be quite honest, the only part where this really shows up is when you swipe to the left or the right. When you swipe up or down to bring up the menu or options, everything looks and feels pretty smooth.

Should customers be considering the Amazfit GTR smartwatch over something from a more well-know brand? That all depends on what’s needed or wanted personally. And, there are quite a few things that warrant a closer look before making such a decision. That being said, the GTR is a good place to start when beginning to shop.

We touched base on this already, but the Amazfit GTR is one good looking smartwatch. There’s just no getting away from that. And, why would you want to? Consumers should definitely be embracing the style of wearables like this. As there are so many things right about it.

For one, it looks more like a regular watch than many smartwatches out there, and that’s a highly underrated trait. It’s 2019 and there are still smartwatches that are noticeably smartwatches. That’s ok for some, but being able to fly slightly under the radar is something that shouldn’t be overlooked. 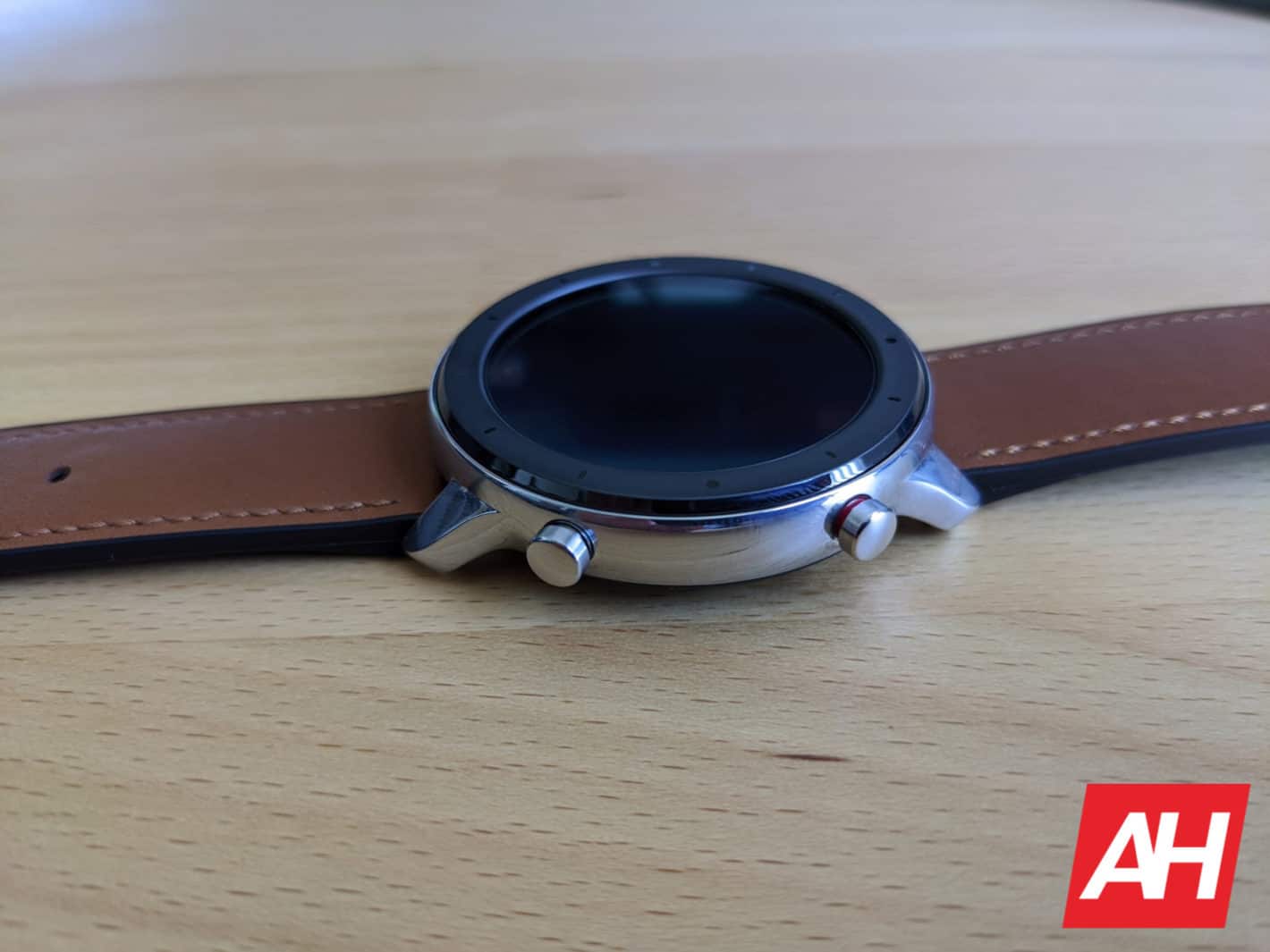 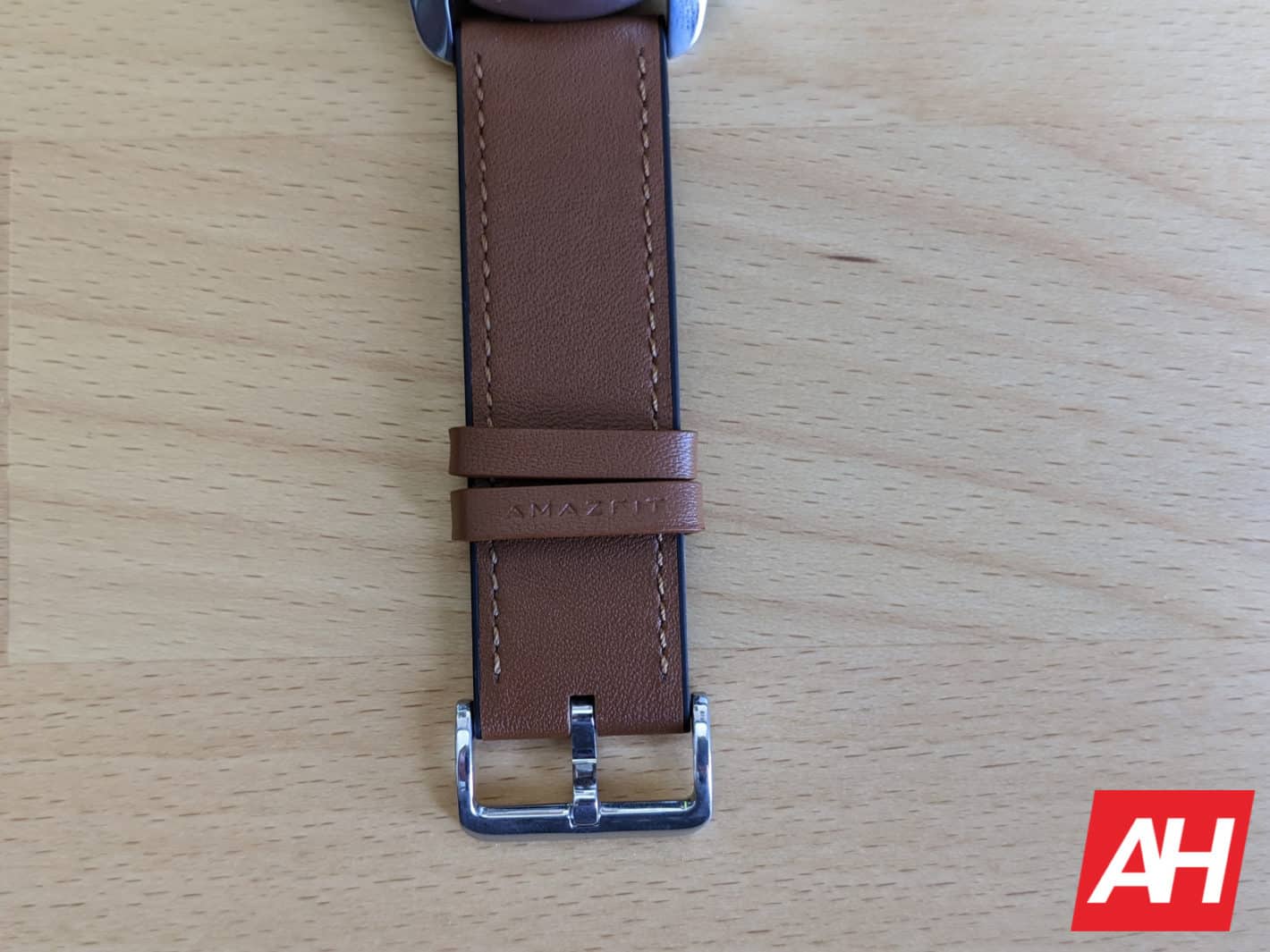 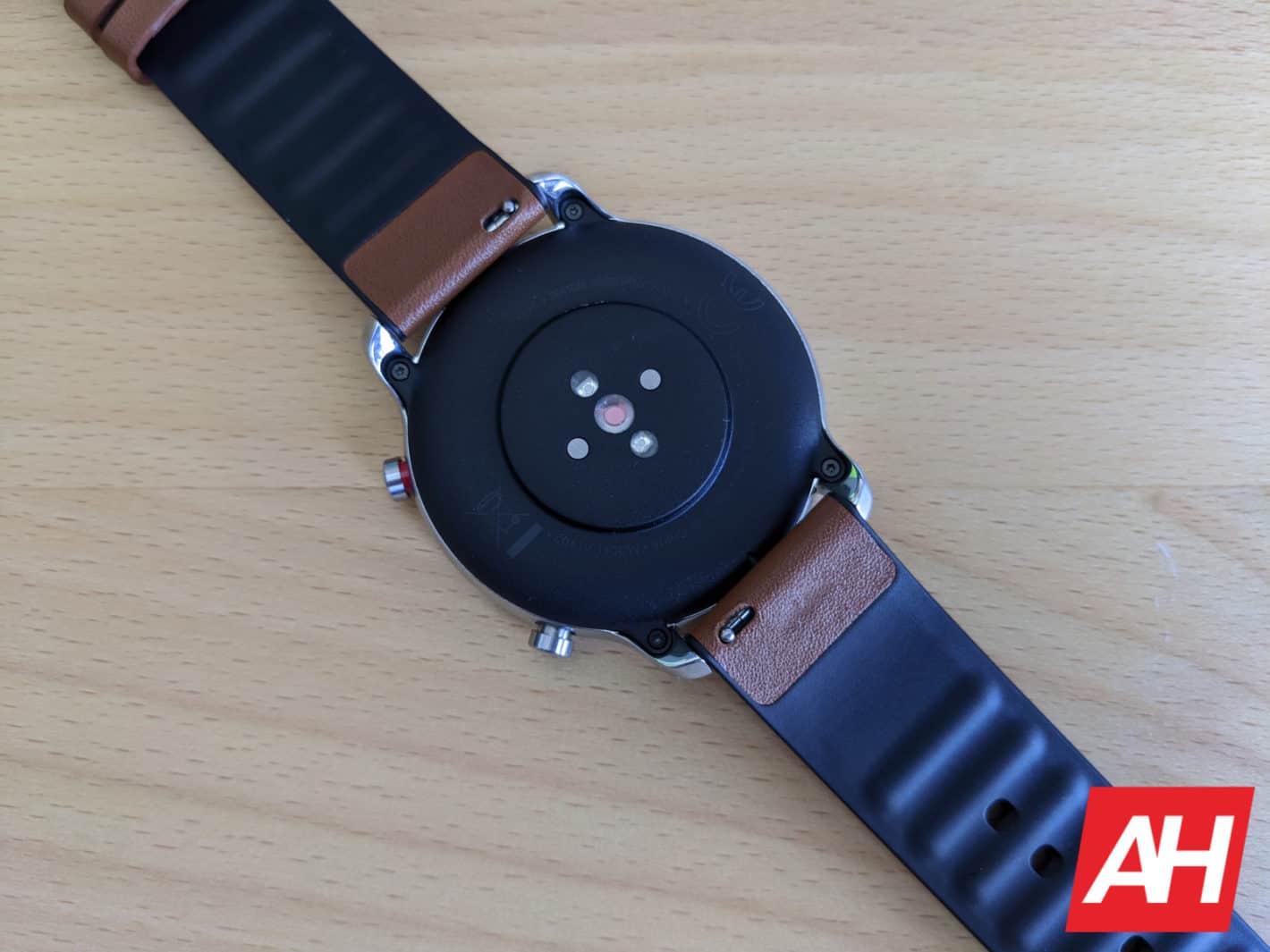 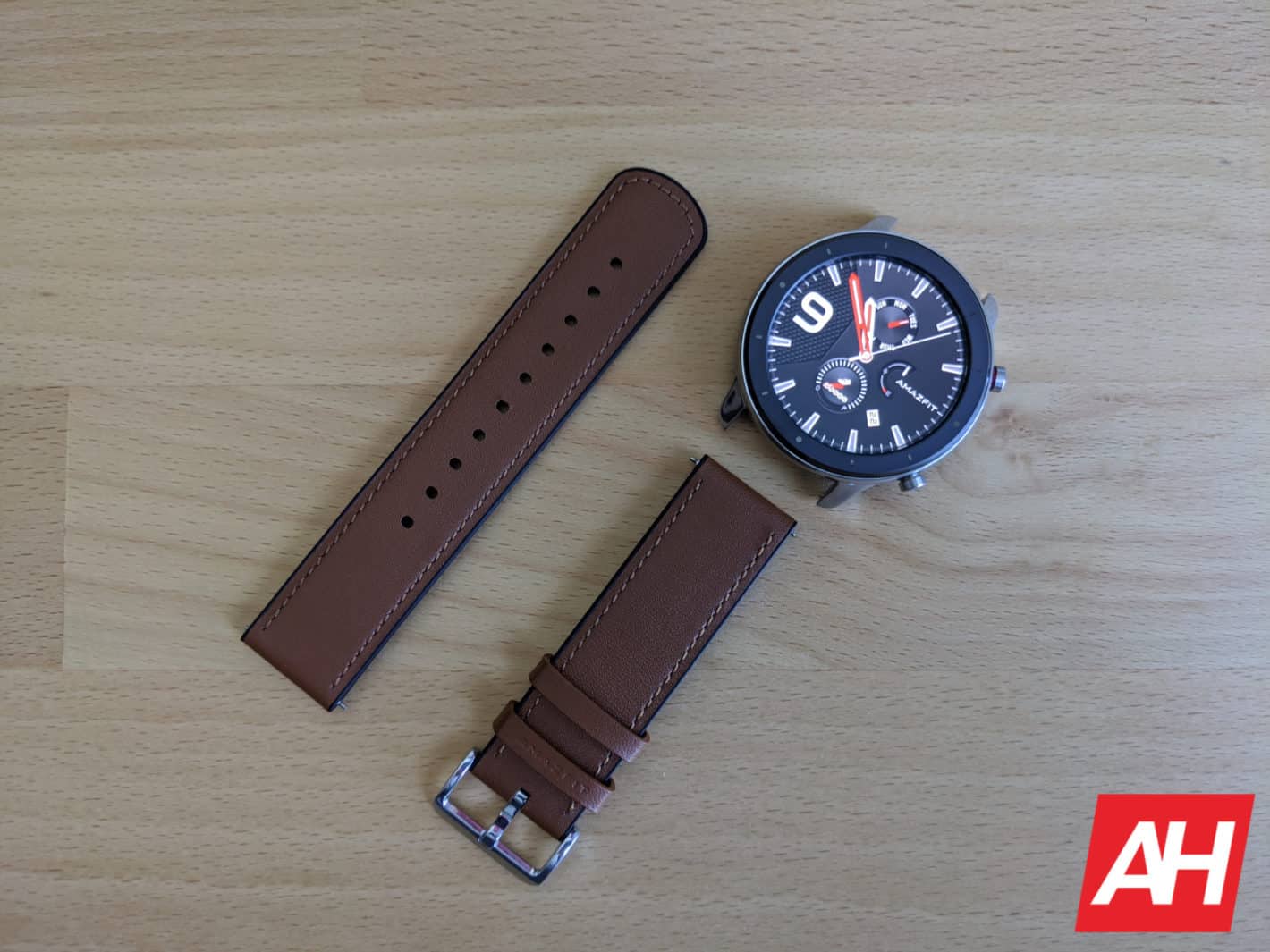 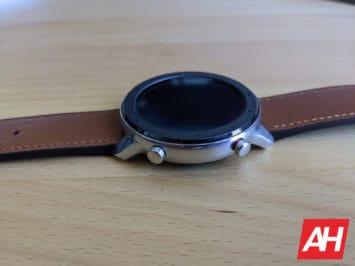 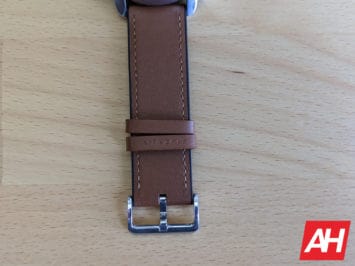 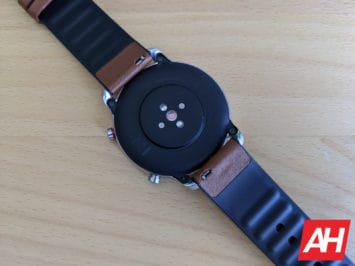 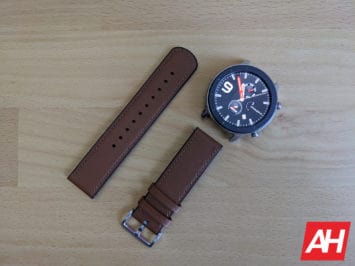 The GTR smartwatch doesn’t just look good though. Amazfit was able to achieve this without dumping tons of costly materials into its build. There are options to suit different tastes as well. The style we have here is the 47mm stainless steel case with the leather strap. You can also get the watch case in titanium, or aluminum alloy. And with either Flourorubber or silicone straps too. Amazfit also offers the watch in a 42mm option in various colors. Including Starry Black, Coral Red, Cherry Blossom Pink, Moonlight White, or the Glitter Edition.

All with matching straps. Suffice it to say there’s no shortage of customization options. The straps on the GTR are easily swappable too, so if you like the strap that comes with it but prefer something else, you can easily get another strap as long as it’s a 22mm (20mm for the 42mm case).

The GTR smartwatch also feels and looks like it has a thinner case than one of Amazfit’s first watches. The Pace. Which is a big plus as it helps prevent the watch from weighing down your wrist too much. This all translates to a watch that looks good on your wrist and feels good even after wearing it for hours. Which is something that some smartwatches and other wrist worn wearables still struggle with.

Amazfit made a pretty bold claim with the watch that it would last up to 74 days. The catch was that this was only in basic watch mode. Meaning you can’t use any of the other features. While we haven’t had the watch for 74 days or more to test that out, we have had it for over a month now. It easily feels like it will live up to Amazfit’s other claim of lasting up to 24 days with average use.

It hasn’t been kept off the charger for nearly a month. I did routinely forget to throw it on the charger throughout the week though. Each time I woke up, I figured it would surely be the day that the battery finally dies. But it never was. Not only can you use nearly all of the watch features for weeks, you don’t have to stress about putting it on the charger every single night. That is a major plus here. Most smartwatch batteries will last you a day or two max. Not the Amazfit GTR. 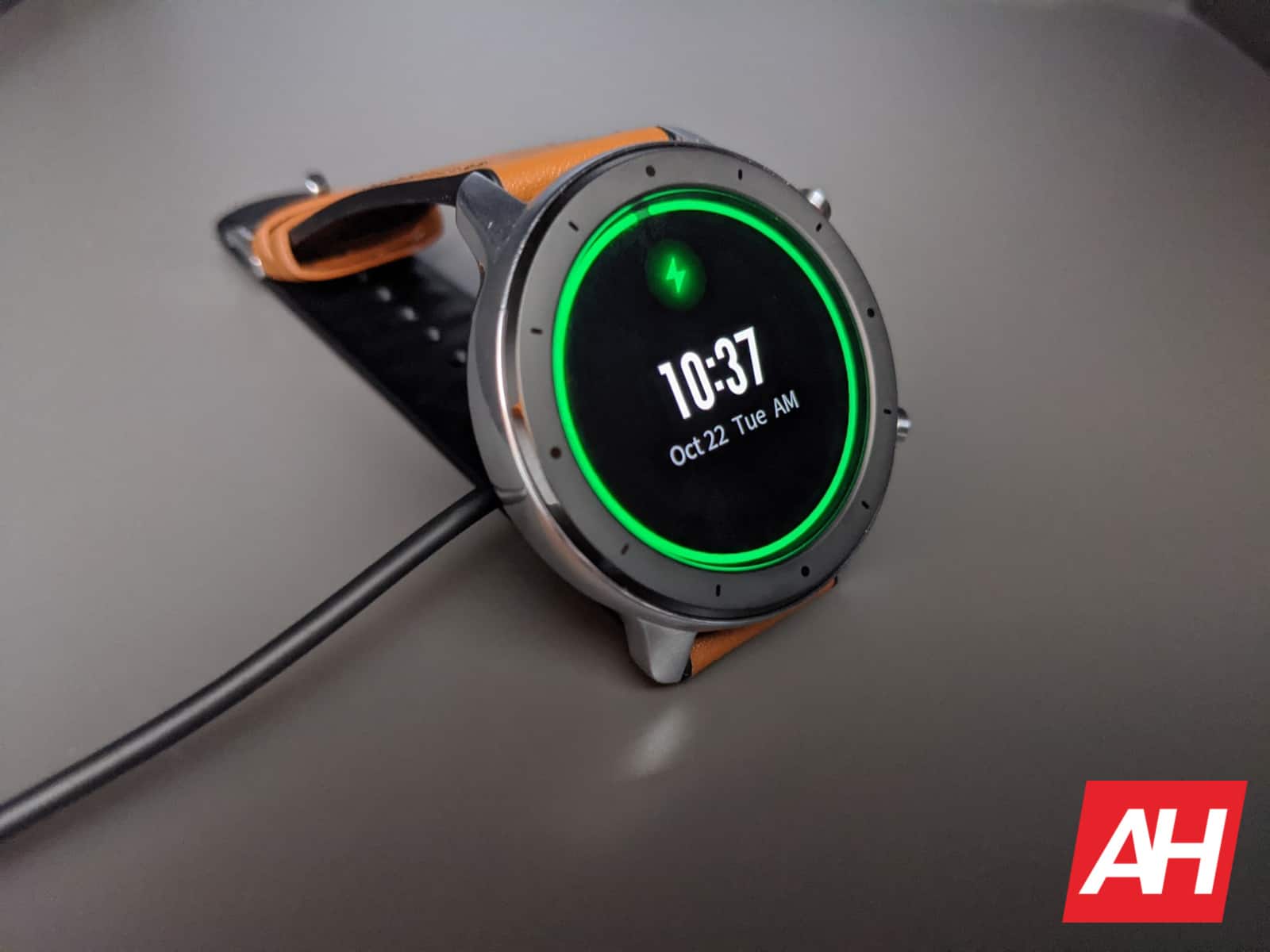 That being said there are some factors at play to consider. Battery life will definitely vary from person to person. And, if you’re constantly using the GPS feature, then the battery will probably still die within two days.

You can still constantly run the heart rate sensor, and use all the functions though for a week or two at the least before needing to recharge it. The GPS is the biggest battery drainer. So if you’re not using that non-stop, the watch battery will last a while.

This means while using the HR, sleep monitoring, notifications, a little GPS (Amazfit says around 30 minutes during exercise three times a week), and lifting the wrist to see the screen around 30 times a day, you should get close to three weeks of use. I ended up tossing it on the charger usually by the end of the week. So this never got tested. But the battery lasts a long time. There’s no denying that, and it’s probably one of the best features.

It doesn’t have Wear OS, but that’s a good thing

Look, Wear OS is cool. The technology behind it and the concept of it are cool. But there’s no need to have that many apps on your watch. The nice thing about the Amazfit GTR smartwatch is that it doesn’t have Google Play or the Apple App Store on it.

Instead, there’s a small list of applications that are available, including fitness apps, stats for your daily exercise goals, a weather app, a music app, an alarm, an event reminder, and various tools like a compass, timer, and countdown. What this boils down to is that the watch isn’t overflowing with different apps. 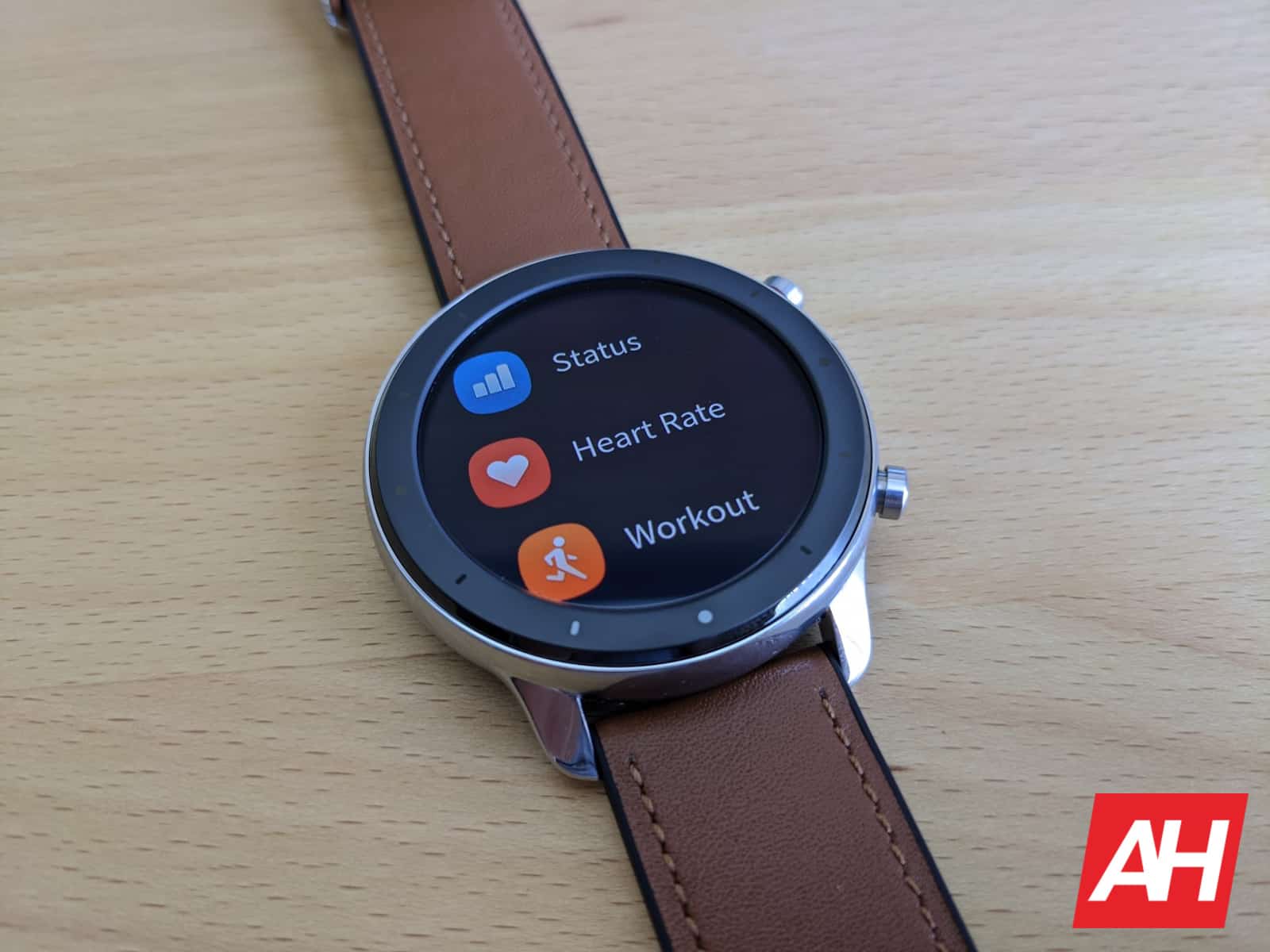 Rather, there’s a collection of some apps, and most are likely to be useful to the person wearing the watch. And, while this is a smartwatch, it very heavily leans on the fitness side of things. So while you can wear it like a regular watch, the times where you’ll actually interact with it like a smartwatch are probably only going to be when you need to check some of the fitness stuff or take a quick peek at one of the incoming notifications.

I personally didn’t use the notifications much. Instead, if I felt the watch vibrate when I received an incoming message, I just pulled my phone out of my pocket and looked at it instead. The one perhaps downside of the lack of apps or a larger smartwatch OS, is there’s no availability to use mobile payment systems.

This isn’t a huge drawback by any means. Having mobile payments on the watch is a nifty feature though. If you can live without this, the Amazfit GTR isn’t really lacking much else in the apps department. It has everything you need for it being the type of device that it is.

Though the GPS feature does drain the battery more heavily, the watch can still last a while if the GPS is used in shorter bursts. If you do end up using it pretty often though, you can easily just toss the watch on the charger every couple of days and you’re fine.

The other good thing here is that the GPS tracks a range of different activities. Chances are whatever your exercise of choice, the watch has a GPS-powered activity tracking function for it. All told there are 12 different sports modes including walking, climbing, outdoor running, outdoor cycling, treadmill use, indoor cycling, open water swimming, pool swimming, trail running, exercise or weight training, elliptical training, and skiing. 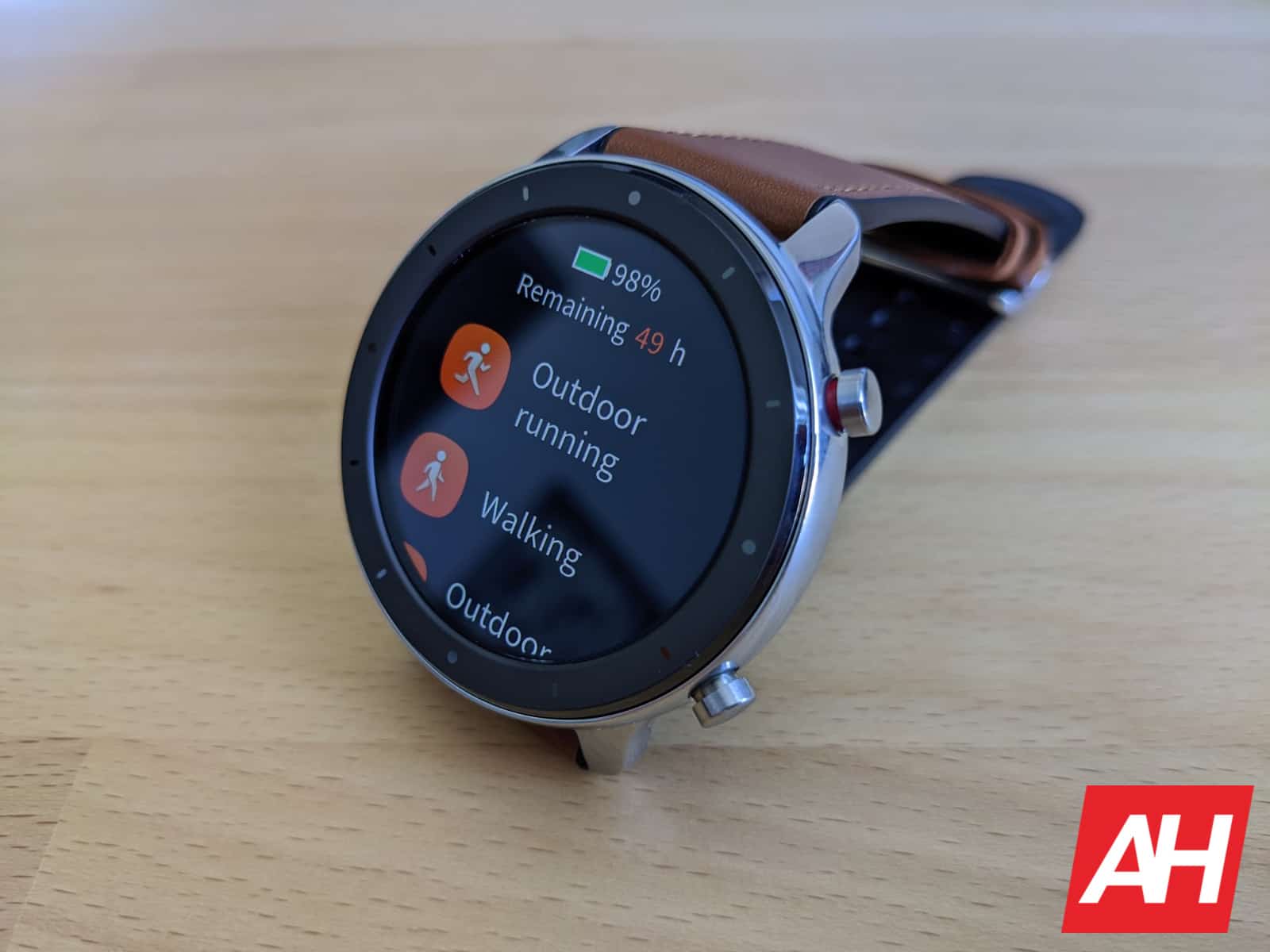 The function button doesn’t appear to be programmable, which is a shame. But that really isn’t a deal breaker. However, it would definitely make the button more useful, and would allow for it to be more tailored to each person.

The display gets extremely bright, so visibility in sunlight is great

Battery life isn’t the only standout feature here, though it may be the best thing about the watch. The Amazfit GTR also comes with an AMOLED display, which gets extremely bright if you turn the brightness all the way up. While you won’t need it that bright in many situations, if you live in a particularly sunny area and use it while exercising outside a lot, you may need to as it will be easier to see.

Whatever you set it to though, the fact that it’s AMOLED helps its visibility, and it makes things much nicer to view. Staring at the display isn’t overly harsh on the eyes as visuals are fairly sharp. This is another good time to point out that the watch costs under $200 (it retails for about $180). Maybe I haven’t used enough smartwatches, but it seems that watches around that price point or less aren’t typically using AMOLED displays. So this is a pretty nice feature to have. 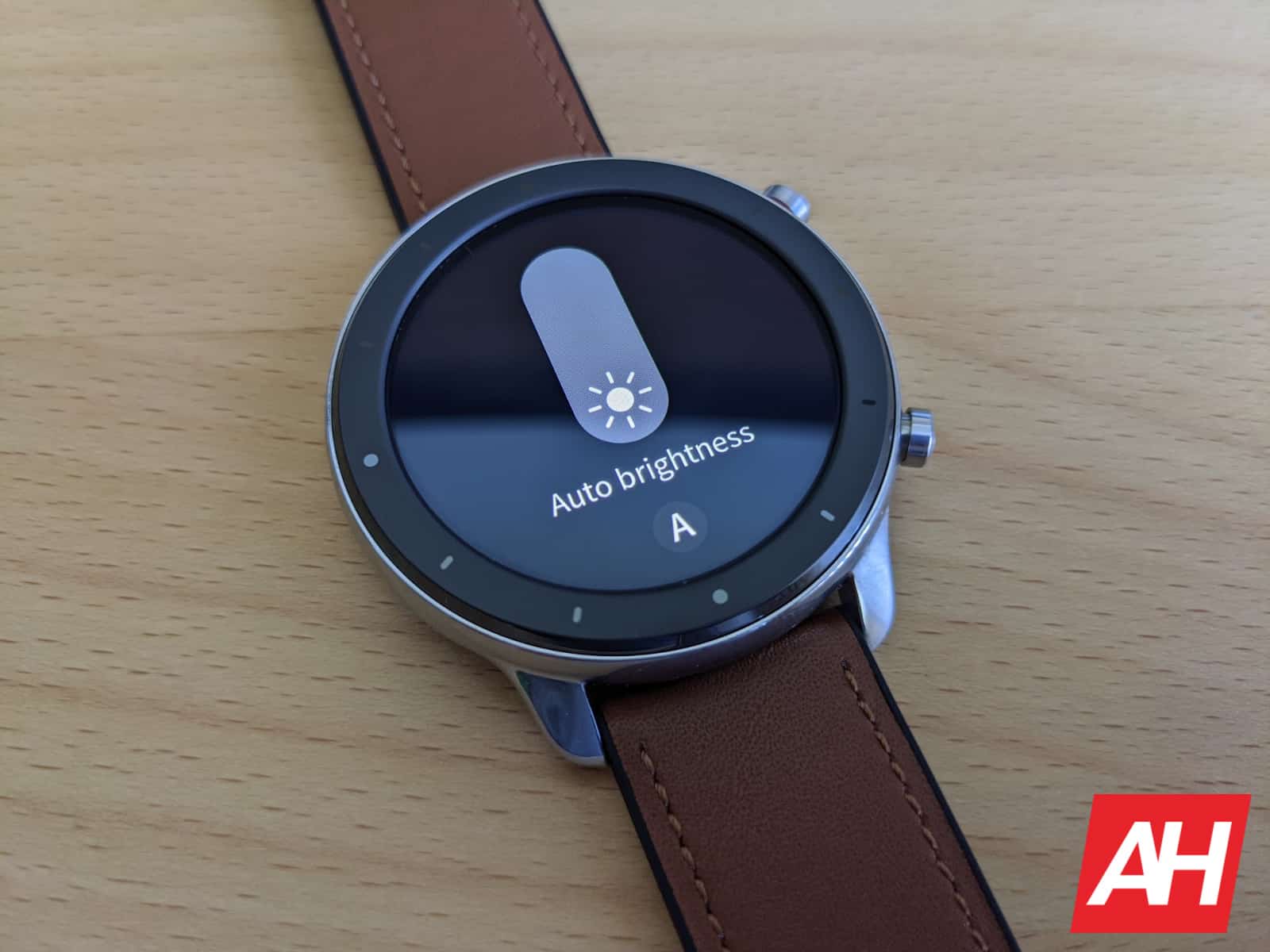 The AMOLED screen also comes in handy if you like switching out your watch faces. Which you can do on the GTR. This will make the different options you have at your disposal more pleasing to the eye. Though, I stuck with the same one for the most part as I preferred it over the other options that were available.

Should you want to grab more watch faces, or switch out from the default one, you will need to download them through the Amazfit app on your smartphone. Once done, the watch face will transfer on its own to the connected watch the next time it syncs with the app.

The Amazfit GTR is a watch worth its salt, and your money

Smartwatches aren;t for everyone. Watches are an accessory which many people tend to have though. And if you want a fitness tracker but also wear a watch, you may as well get the Amazfit GTR. You will probably get just as good of battery life while using the same functions that a fitness tracker will offer. Plus you’ll get the benefits that trackers won’t offer. Like the big, bright, AMOLED display and the stylish design that looks more like a regular watch than it looks like a piece of technology. 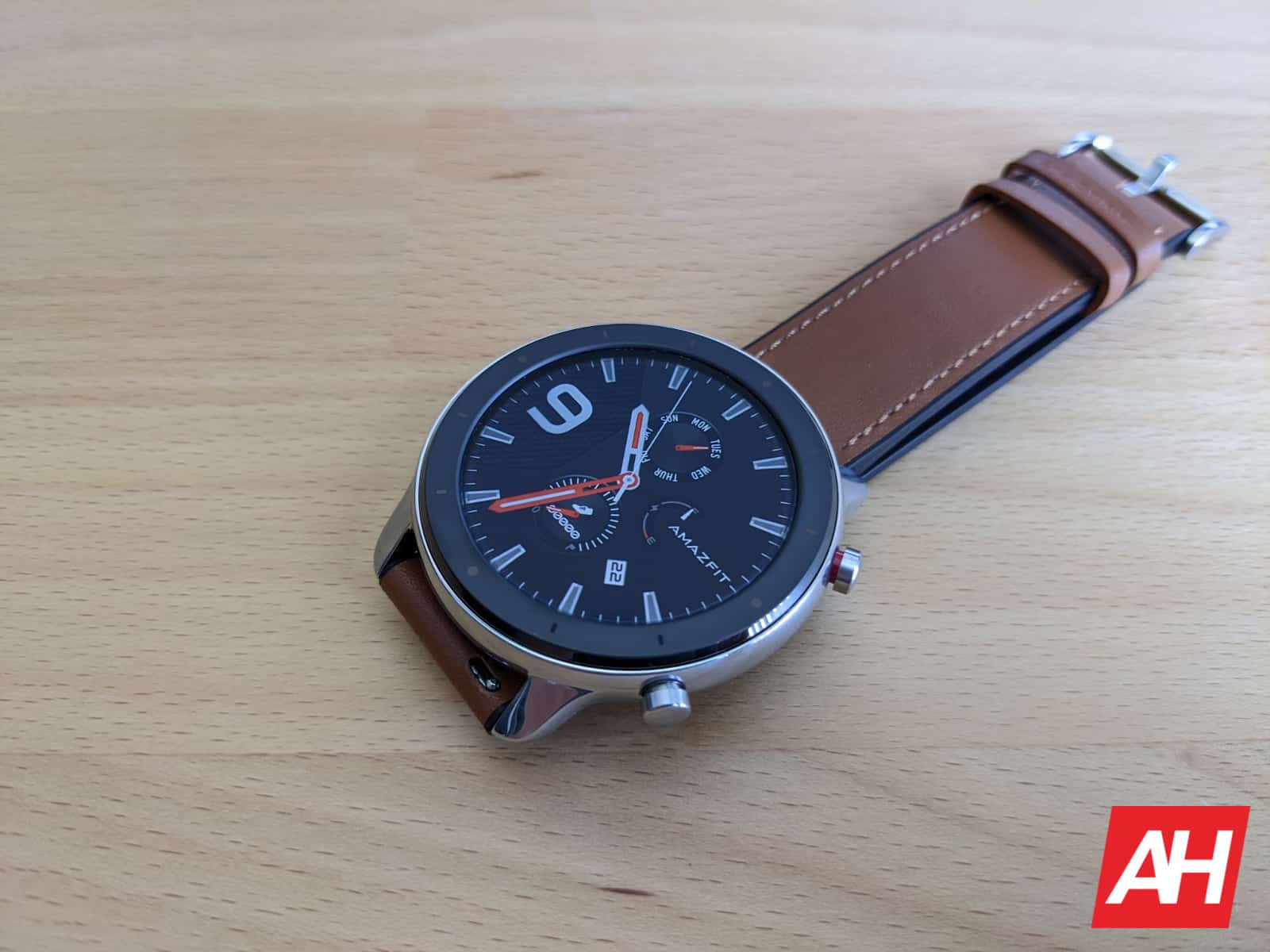 While I would not have really recommended the Amazfit Pace from a couple of years ago over other competing devices, it’s a different story with the GTR. This is a really good smartwatch, and it won’t break the bank.

Most importantly of course, everything works well. Save for the lack of the ability to program the function button, as well as the noticeable lag when you swipe between the different tile-like screens (of which there are only two), the GTR has pretty decent performance in just about every aspect. If you’re in the market for a smartwatch, definitely consider this as one of your options before you narrow things down and decide on a purchase.