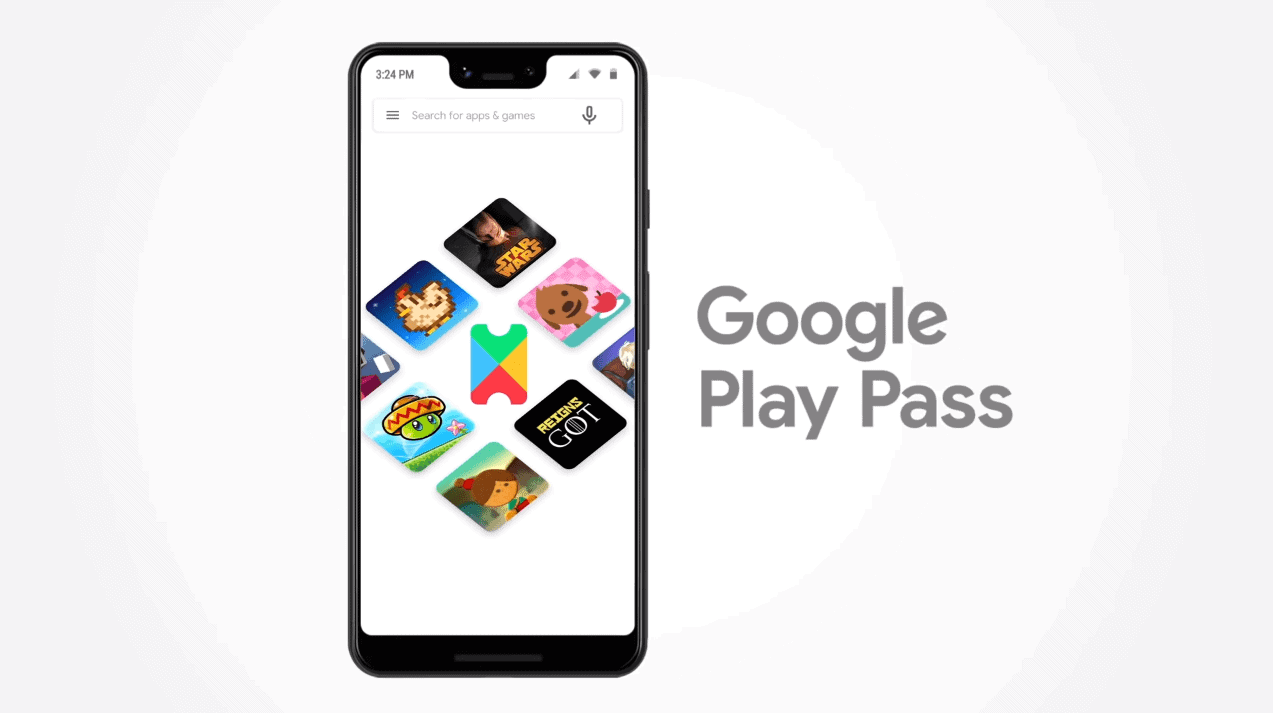 What is Google Play Pass? It’s Google’s new app & game subscription service for the Play Store. If you want more detail than that, this article will provide you with more information.

Subscription services are nothing new. In fact they’re pretty much everywhere for various types of content, from movies & tv to games on PC and console.

What is new are subscription services that allow you to access numerous apps and games on mobile devices for a small monthly fee. Play Pass is one of these services, having launched just days after Apple launched its own, called Apple Arcade.

No. One is the subscription service for apps & games, the other is the store front through which you access the service and everything it offers.

Play Pass will let subscribers download and use or play a selection of apps and games. These apps and games are free, and come with absolutely no ads or in-app/in-game purchases.

It does not. The selection of titles which are available is curated by Google. Chances are you will find some familiar offerings, but there are going to be many options which just aren’t available.

Furthermore, developers have to show interest in having their content be a part of the service. Once developers fill out a form and submit it to Google, it will decide whether to offer it or not.

How do I sign up for Google Play Pass?

It’s pretty simple, actually. You open up the Play Store app, then head right on over to the Play Store menu on the left side of the screen. If you open the menu and you have access, the Play Pass ticket icon will be there right under “notifications.”

If the option is there, simply tap on the icon and follow the on-screen prompts. These will include things like adding or selecting your payment method before confirming you want the subscription.

How much does Google Play Pass cost?

Right now you can snag a subscription to the Play Pass service for just $1.99 a month. This is a promotional price for people who sign up by the end of day on October 10. After that, it will cost $4.99 a month to continue.

The good news is that the promo pricing lasts for an entire year. You even get a 10-day free trial of the service before the payments start. It is also possible that Google could increase or decrease the cost of Play Pass at any time.

Google also isn’t adverse to offering plenty of deals. So while the promo $1.99 pricing is only around for a limited time, this is an initial offering. There will probably more price deals for Play Pass in the future.

Which games or apps are included In Google Play Pass?

There are two ways to check.

From the Play Pass tab

The first method is to simply tap on the Play Pass tab and it will show you a bunch of the games and apps that are included in the service.

There are a number of curated sections in the Play Pass tab that Google puts together. These will also change every so often. In addition to this there are categories for specific types of games and apps, including RPG, Action, Adventure, Music & Audio, Books, and more.

From the Games & Apps tabs

The other way is by browsing through the regular tabs for games or apps in the standard section of the Play Store.

Most content which is included in the service will have a little Play Pass ticket icon attached to it, such as Stardew Valley and Terraria in the image above. Some will not though. Swordigo is one of these games. If you search for it in the Play Store the icon is not visible.

If however you tap on the Swordigo install page, it will tell you that it’s part of Play Pass.

Where is Google Play Pass available?

Right now it’s only available in the US. Beyond that users will need to play the waiting game. Google hasn’t specified when it will be made available outside of the US.

All it does say is that people in other countries should stay tuned for international availability. This doesn’t give any hints or suggestions as to how long the wait may be.

When is Google Play Pass launching?

It has already launched for some users. Google’s official announcement from yesterday mentions that it will start rolling out this week.

What this means if you’re in the US and it still isn’t showing up is that it may be another day or two. It won’t hurt to check all Gmail accounts you have tied to the Play Store though, if you have more than one. You might get lucky and have it pop up for one of them.

As for when it will launch elsewhere, the same thing applies as learning where it will launch next. Google is asking users to hold tight for more information.

Does Google Play Pass only work on Android phones?

Yes and no. It will only work on phones if they run on Android and have the Play Store installed.

It will also work on other Android-powered devices that have the Play Store, such as tablets and laptops (like the Pixelbook). There are a couple more caveats as well.

The Play Store on the device you want to use it on has to be on version 16.6.25 or later. The device also has to run on Android 4.4 or later.

Yes, you can. Not only that but there’s no family plan cost required which means it will be the $1.99 or $4.99 monthly cost for everyone.

Before you can share the subscription though, you have to set up a family group in your Play Store account.

You will need to select your Family Group members next. After that, anyone inside it will have access to Play Pass, though they will most likely need to activate it first.

No. Google set it up so that any downloads are not shared between Play Pass subscribers. Since the service is tied to the individual emails of each person in the family group, downloaded games or apps go directly to that person’s device and no one else’s.

This will help prevent your device from being loaded up with games or apps you would never play or use.

What happens to downloads if I cancel Google Play Pass?

Play Pass is a subscription service. While it’s active, you can download and use games or apps free of charge instead of paying for them. They’ll also be free of ads and of in-app/in-game purchases.

If you cancel your Play Pass subscription though, you will lose access to those games or apps. You will however be able to continue using them for the remaining days of your subscription. In the event that the apps or games were free, they will stay ad-free until the same time.

Will games and apps ever be removed from Google Play Pass?

Sometimes, yes. Google states that every so often games and apps may leave the Play Pass service. If this happens, usage is still there, not too unlike it is for the remaining days of your subscription after you cancel it.

How do I manage my Google Play Pass subscription?

The same as any other subscription from the Play Store – from the menu.

Subscriptions will be listed right under notifications, where the Play Pass option was before you set it up. 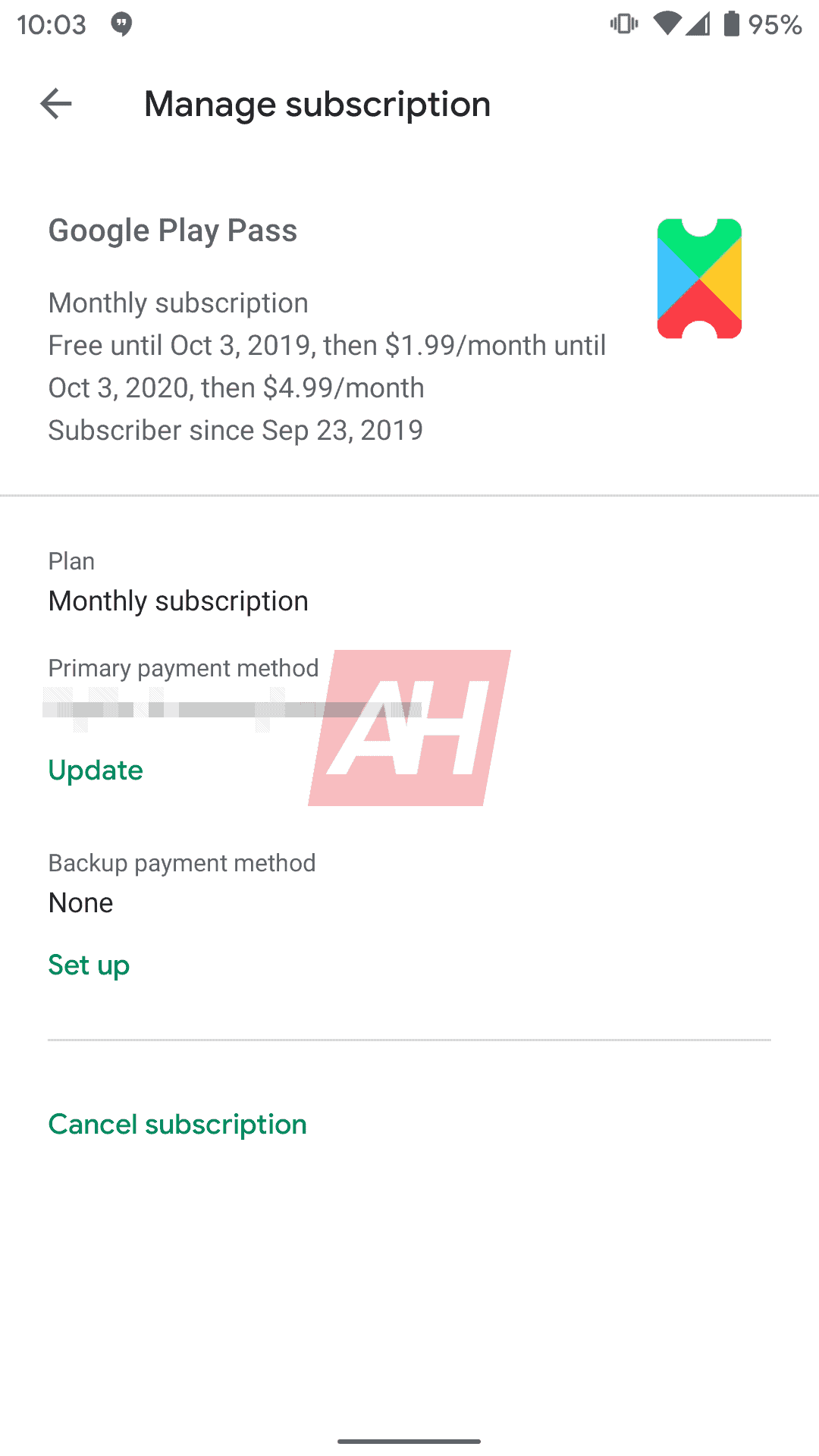 You will see Play Pass listed on the subscriptions page once you open it. Tapping on it will bring up more information and a few manageability options. You can update your payment method here, as well as set up a backup payment method in case something goes wrong with the first one.

In addition, this is where you cancel your subscription if you ever wish to do so.

What are the issues with Google Play Pass?

The main issue right now is that there aren’t really that many games or apps available as part of the service. This will change over time however. Google says it’s committed to adding more games and apps to Play Pass every single month.

Another problem is the quality of the content that is available. Some of the content included is lacking. However everyone’s tastes are different and some users will find the library of content in Play Pass to be just fine.

Again, this is another thing that will improve over time as Google adds in new stuff.

One thing that seems to be a technical issue is the Play Pass icon not showing up alongside all games or apps. When searching for specific games and apps, such as Swordigo, the icon isn’t visible in the search results like it is for some others. It’s unclear how many games or apps have the same issue.

Is Google Play Pass for me?

There are a few things to consider before deciding if the subscriptions is worth it for you. First is whether or not you feel the price is worth it for what you’re getting. If you would utilize the games and apps enough, then it’s probably a good choice.

You’ll also want to think about whether or not you have anyone in a Family Group that might want access. Especially since up to five people can use the service for the $4.99 monthly fee.

It’s also important to remember that not all games and apps that are part of Google Play Pass are paid. Some of them will be free, sans the ads and micro transactions that would be there in the normal version outside of Play Pass.

If you like the thought of that, then it would be another good reason to subscribe and try it out. At the very least, Google Play Pass is for everyone for the first ten days, as this is the trial period.