Marvel Contest of Champions is getting a new character today, and it’s none other than Vision, whose real name is Aarkus.

Players looking to get their hands on this new hero should be able to do so tomorrow after a brief update.

Vision (Aarkus) is a cosmic class hero, which means his abilities will reflect that as will his weaknesses and synergies.

Using Smoke and Mirrors, Vision is able to essentially nullify debuffs that don’t do any damage. This will have the chance to trigger whenever a non-damaging debuff is applied at a rate of 80.08-percent. However, it will only trigger every 9.5 seconds.

Power Gain meanwhile is a buff that Vision applies to himself at the start of every fight. This buff will stack over time and allow him to apply more Armor Break debuffs to his opponents. This is where Coldsnap comes in, as enemies with an Armor Break debuff will take Coldsnap damage.

These are essentially damage over time effects, and they hinge on the Armor Break debuffs being active, so it’ll be important for players to be aware that these are always up on enemies.

There are three special attacks that players can throw out with Vision. These include Spiral of Smoke, Blizzard Blast, and Talk To The Hand.

Spiral of Smoke may be the most important, as each hit from it refreshes any Armor Break debuffs that are up on enemies. And, since those debuffs cause Coldsnap damage, making sure they stay up will help you maximize your damage.

His second special attack, Blizzard Blast, will remove Armor Break debuffs. So keep this in mind. They will also replace those debuffs with another one called Armor Shattered. With this debuff, the goal is to reduce the armor of opponents.

The key in this is keeping as many Armor Break debuffs up as possible. This is because every Armor Break debuff removed will extend the time of Armor Shattered by five seconds. Each one removed also reduces enemy armor by 352.94.

His last special attack, Talk To the Hand, will increase the area of affect for Vision’s abilities. This only lasts for 20 seconds though. It also works in tandem with Armor Shattered, as if that debuff is active when players launch Talk To The Hand, it’ll increase Vision’s attack rating by 2066.4 thanks to a 20-second Fury buff.

Synergies to look out for

Vision’s synergy bonuses to look out for are First of His Name with Vision and Vision Age of Ultron, Dry Ice with Ice Man and Mysterio, and Senior’s Discount with Black Widow (Claire Voyant), Old Man Logan, and Captain America. Each of these synergy bonuses will only activate if you pair Vision (Aarkus) with the other champions noted. 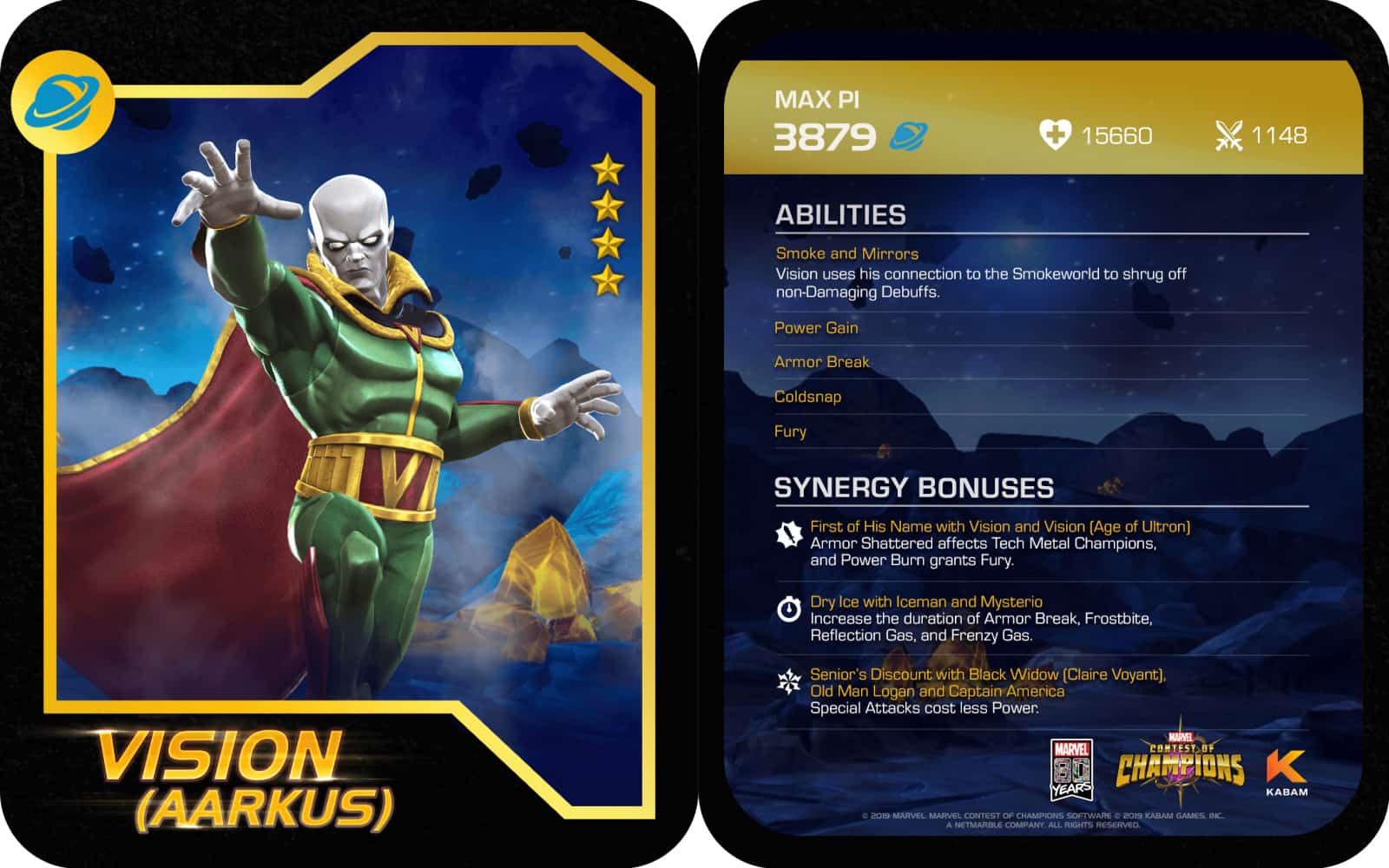