Skip to content
Advertisement
Trusted By Millions
Independent, Expert Android News You Can Trust, Since 2010
Publishing More Android Than Anyone Else
20
Today
20
This Week
579
This Month
4454
This Year
122034
All Time
Advertisement Before Until You Fall came along, melee combat in VR felt a bit sub-par. Games like 'Beat Saber' or 'Blades and Sorcery' give players the ability to wield a melee weapon and slice through virtual objects, but neither of these games feel like holding a real blade. Vader Immortal is the closest we’d seen to delivering more visceral combat recently, but Until You Fall finally nails the feeling of a physical weapon in a virtual world in a way that no other VR game to date has.

How does Until You Fall get VR combat right? The trick is weight.

VR controllers are almost all designed to be light and agile, giving players the ability to slice blocks in Beat Saber effectively, or holding your arms up in Audica a possibility without them falling off due to fatigue. This, paired with the lack of physical feedback that would otherwise be present when a real weapon comes in contact with another weapon, makes VR combat feel incredibly fake. Swinging a giant claymore around as if it were nothing more than an oversized pencil just feels wrong, but Until You Fall solves this problem by giving weapons a proper virtual weight.

How does the game do this? Delay. That sounds experience breaking and possibly sickness-inducing, but the way Schell Games has created a proper kinetic system within Until You Fall’s world, everything just makes sense the moment you play it.

Take the starting daggers, for instance. They’re small, light, and are as easy to swing around as you’d imagine. A short time into the game you get your first large sword and, just after that, the first large axe as well. It’s nearly impossible to even show how the weight difference affects the feeling in video form, let alone written word or pictures, but the weight difference between all of these weapons is truly palpable while using them. 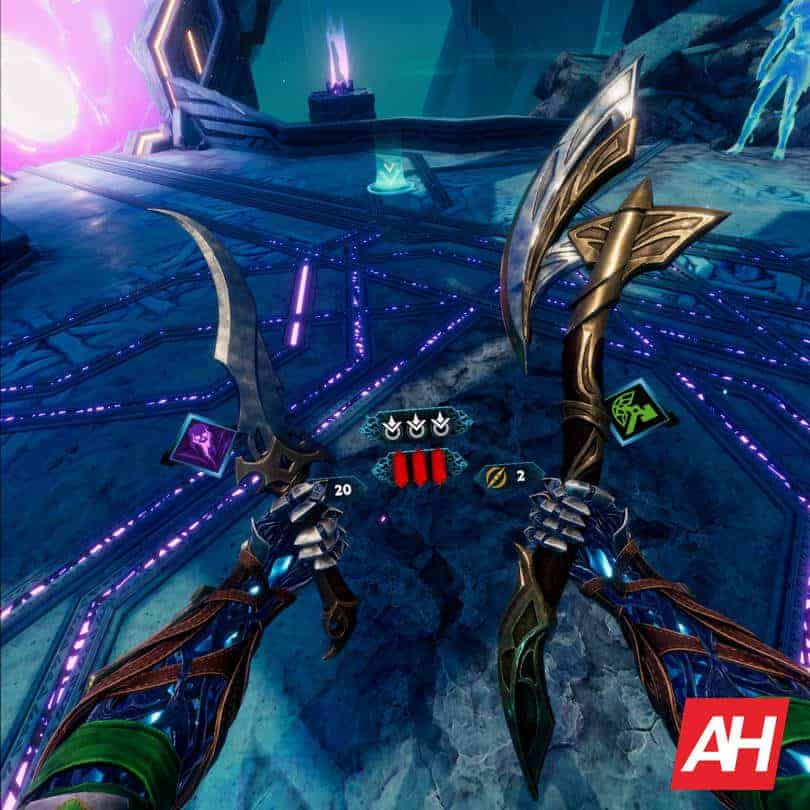 While holding the dagger, for instance, you’ll be easily able to quickly block incoming enemy attacks from the side, flipping the blade over to knock back a sequence of attacks from a powerful enemy, or even juggling attacks from multiple enemies at a time. The heavy axe, on the other hand, takes far longer to turn over or swing from one side to the other and, if you rely on this heavy weapon for all your blocks and guards, will quickly become an impossible tool to wield with its slow responsiveness and staggering weight.

Subsequently, slashing wildly at enemies with that same dagger will certainly do some damage, but it’s nothing when compared to a single blow with the heavy axe. While shields will be weakened and health eventually lowered via the dagger’s unceasing blows, one strong under-handed swipe with the axe will literally send the assailant flying through the air into a heap on the ground.

It’s this weight that makes the weapons in Until You Fall feel real, and there are plenty of them to get and upgrade, too.

But it’s not just about the weapons or the upgrades. Until You Fall features a combat system that’s equally visceral and satisfying as the weapons feel. The combat itself looks and behaves similarly to games like Star Wars Jedi Challenges, or even Star Wars Vader Immortal, where players will be blocking and dodging attacks as they happen. This is normally presented with a line that can be rotated in any orientation, from vertical slices, horizontal swipes, or anything in-between.

Players need to line up their weapon with these lines before the attack happens to successfully dodge it, but it’s not just down to how well you line up your blocks to the attack. Weapons all have strength levels and an amount of damage they can block. Larger weapons can withstand more damage than smaller weapons, and flurries of attacks will make it impossible to block with these larger weapons, too. 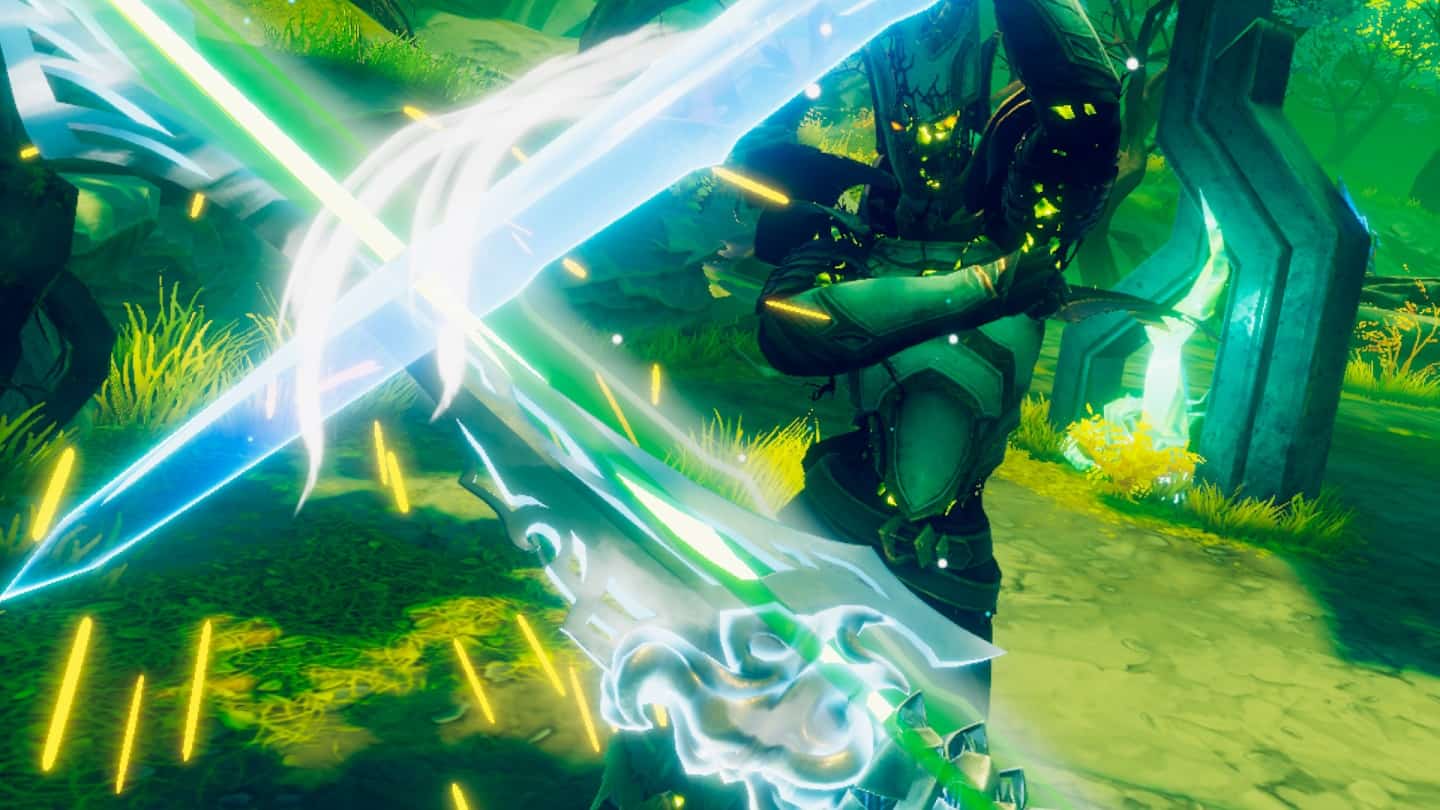 Some moves from larger enemies can be dodged by moving your body according to the arrows, typically left or right dodging, as well as ducking under attacks. Visual queues are presented incredibly effectively and were never confusing for me.

The mechanics themselves aren’t what’s impressive though; it’s the fact that fighting a group of enemies feels like a real-life skirmish would feel. This is because enemies don’t take turns fighting you. If you’re there, the enemies will attack, and they’re incredibly relentless as well. Groups of two or three enemies fighting you from multiple angles is a common scenario, and using both weapons and all of your peripheral vision is the key to winning these battles.

All these pieces combine to create the most visceral, realistic and convincing combat I’ve ever experienced in VR. 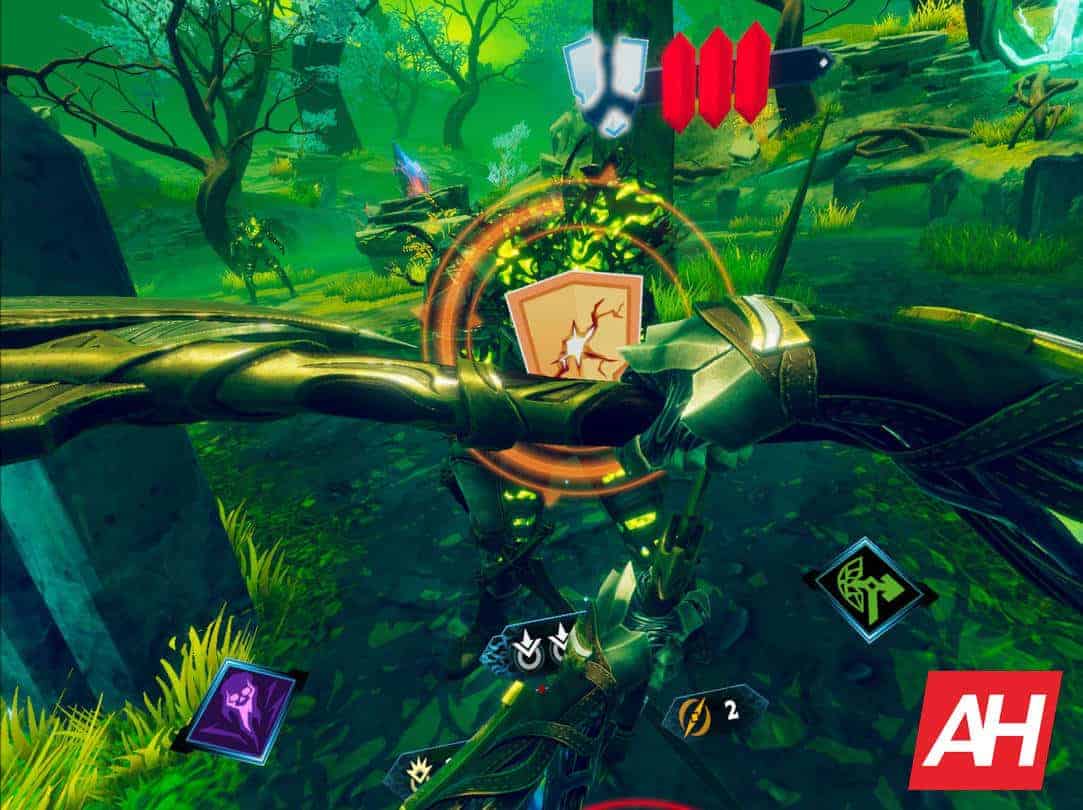 It’s tiring, yet exciting. A combination that makes you want to get better. To get stronger. To get even.

The irony of all this is that Until You Fall isn’t a simulator. Rather, it’s a “rogue-like” game that feels rather arcadey in most of its presentation. From the pseudo-80’s music to the neon color and stylings of the medieval-esque world, Until You Fall feels unique in many ways but never gives the visual impression of being a sim.

The basic structure of the game flows something like this: spawn, fight until you die, respawn and upgrade with the bounty you earned in the previous playthrough. Wash, rinse, repeat. It sounds more repetitive than it feels, and that’s because the core mechanics are done so well that it always feels like a gift to get to try again.

The game is also tough. Very tough. I’m not sure I’m ready to call it the Dark Souls of VR, but it’s definitely challenging and took me several hours to get past the first tier of levels, all of which are tinted green and yellow. Further levels change up the color palette and give visual cues to the increasing difficulty and brutality that lies within the halls and woods that you travel though. Additional difficulty settings are in the works for the game, so look forward to that if you don’t enjoy a challenge.

Getting around is very basic

Locomotion is basic and is limited to a slow walk (which has been sped up in a patch but could use more adjustment options), as well as a dash that doubles as an effective shield-breaking attack.

Thankfully, for players with HMDs that still use a cord to connect to a computer, levels are mostly designed in a linear fashion. This means you shouldn’t get that cable tangled up during combat since you’ll regularly turn back to the forward-facing position before continuing on. It’s still most comfortable with a wireless solution, like with an HTC Vive, so if you have the ability to play that way it’s certainly preferable.

Levels are typically broken up into small segments with a handful of enemies, a boss, or sometimes a combination of both. At the end of each level, you’ll be able to choose one randomized power-up. Each weapon has a set number of slots that power-ups can be placed in, while some power-ups will simply heal you or give you “aether”, a currency used to upgrade items in the game. 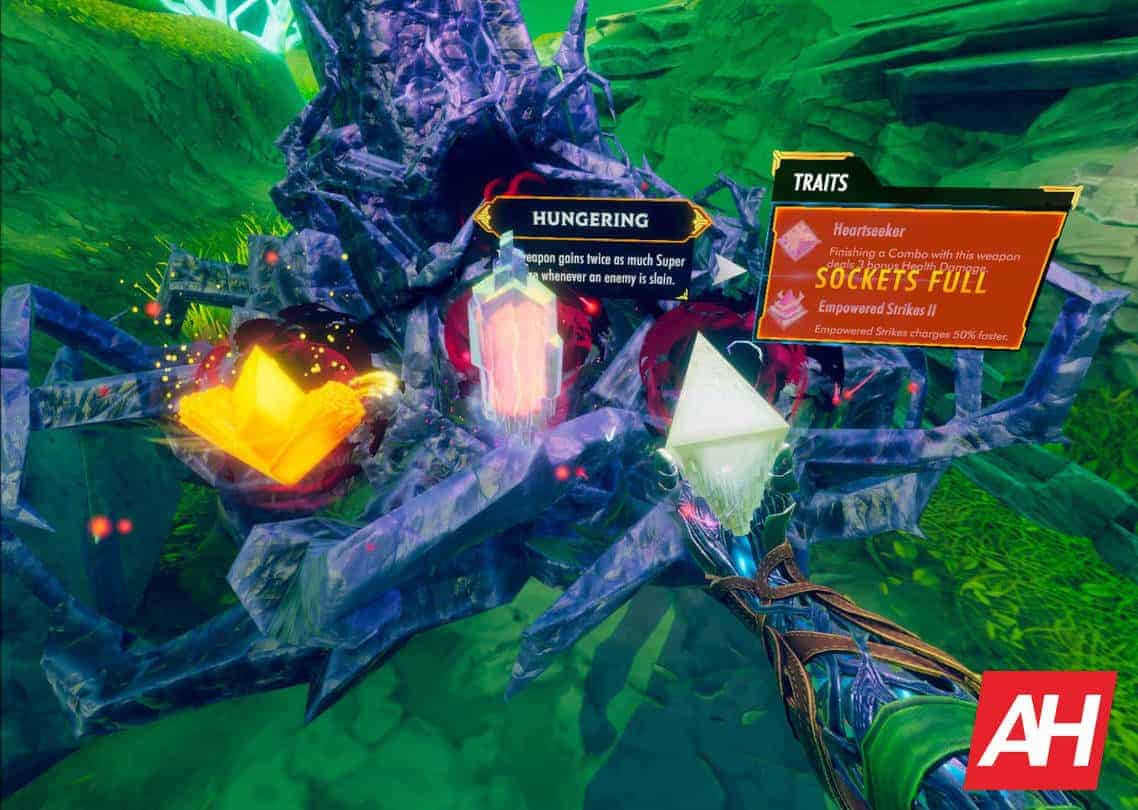 Weapons can be upgraded after dying when you respawn back at the main hub, and players will find themselves leveling up as the game progresses.

Right now, Until You Fall is still in Early Access on Steam, with plans to support Windows Mixed Reality (WMR) systems in the near future, as well as an Oculus Rift release. There’s a likelihood that the game will make it to Oculus Quest in the future, but Schell Games is dedicated to fleshing out the content and getting the game to version 1.0 first.

Until then, you’ll be endlessly falling and upgrading as you progress through the game’s limited story, which is going to be fleshed out as development progresses. Right now the focus is on mechanics and core gameplay and Schell Games has absolutely nailed that piece of the puzzle with flying neon colors.

What’s planned next? We had a chat with Schell Games about their roadmap for Until You Fall, including what’s being planned before the game is deemed as an official “final” retail release. Schell Games is maintaining a public Trello board to aid in awareness and documentation for development and planned future features and content.

Playing wirelessly on the Vive is what really made the difference for me, and one that’s important in a game where you’re hacking and slashing to get through worlds. 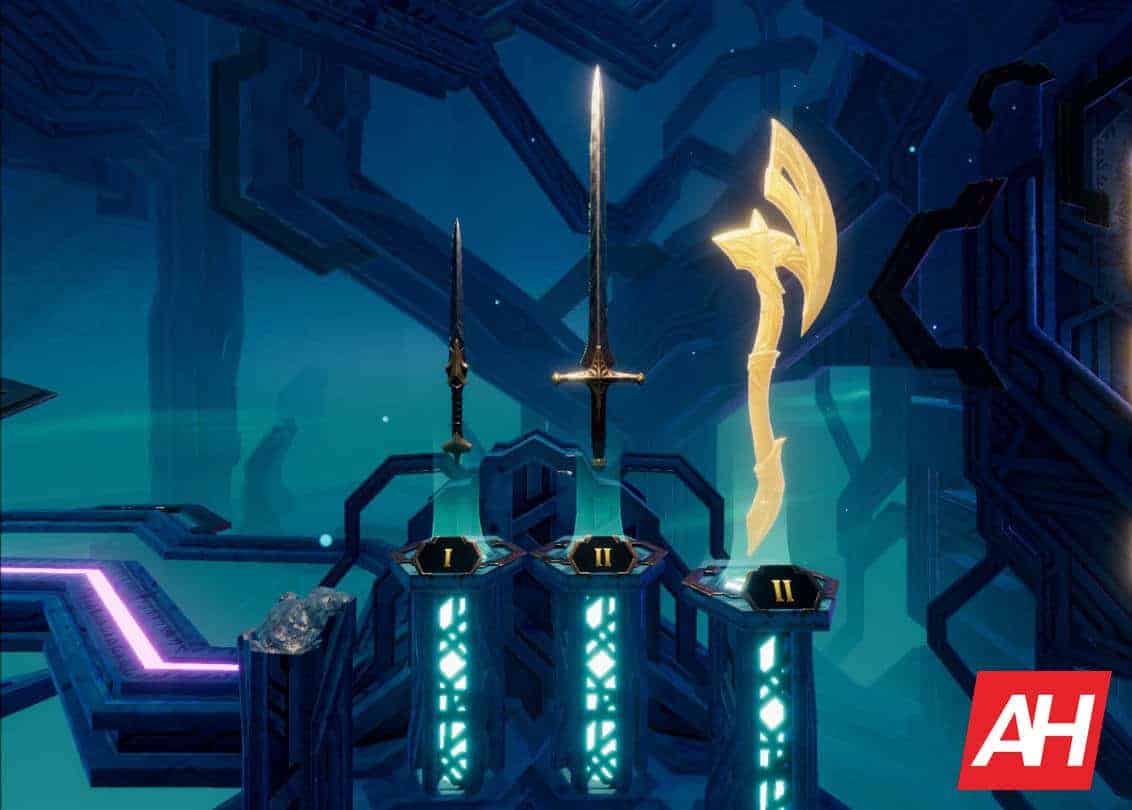 This major release looks to also include a number of new weapons and a shield option, which will certainly continue to change up combat styles if you so choose to use it over a secondary weapon.

Beyond that only version 0.3 is detailed and it includes additional content, levels and a final boss fight. Given the gulf in versions between 0.3 and 1.0, there’s clearly a lot of content that Schell will be adding over the next several months until it reaches retail status.

Once it hits retail status, Schell has expressed interest in pursuing development of the game for the Oculus Quest; a venture that’s sure to be lucrative for both players and the developers, as this is a perfect title to fit onto the Quest’s library and play style.

A war worth waging

At a mere $20, Until You Fall gives us the most realistic feeling quasi-medieval combat yet available in VR. It’s early access, so there’s not one hundred hours of content to trudge through, but it’s still in development and has a well-tracked roadmap with plenty of planned features.

$20 is a price that’s well worth even what’s available now, much less what’s to come. If you enjoy sword combat games at all, you absolutely have to pick up this game. It could easily double as a virtual fitness app too, so there’s a decent bonus for folks wanting a little extra exercise without feeling like their trying to actually work out.

Until You Fall - Steam Store