Samsung has just announced a new smartphone in its A series of devices, the Galaxy A20s. This announcement came in a rather odd fashion. The company did release the news via its official website, but in the form of an infographic, for the most part.

If you take a look at the image provided below this article, you’ll be able to see that infographic. Here, the company shows the device itself, and most of its specifications. On top of that, you can see the color variants of the device as well.

The Galaxy A20s will be available soon, pricing unknown

Samsung did not say when will this phone become available, though. The company also did not share the price tag of the Galaxy A20s. It did state, though, that the phone’s availability will vary from one region to the next.

Based on the image provided by Samsung, the Galaxy A20s is made out of metal and glass. At least it seems like glass is applied on the back of the phone, though it could be polycarbonate as well.

Samsung’s logo is placed right below that fingerprint scanner. The phone’s back is curved, by the way, on the sides. The power / lock button sits on the right-hand side of the phone, while the volume rocker buttons are on the left.

The Galaxy A20s features a waterdrop display notch, and a single camera. A rather thick “chin” is placed below the display, but the phone’s bezels are quite thin overall.

The Galaxy A20s is fueled by a 64-bit octa-core SoC clocked at 1.8GHz. We don’t know what SoC is this, but it could be the Snapdragon 625 by Qualcomm.

A 4,000mAh battery is included in the package as well, while the phone supports facial scanning. The device uses its selfie camera in order to scan faces, so it’s not an advanced facial scanning. It’s recommended you use the fingerprint scanner as the primary form of protection. 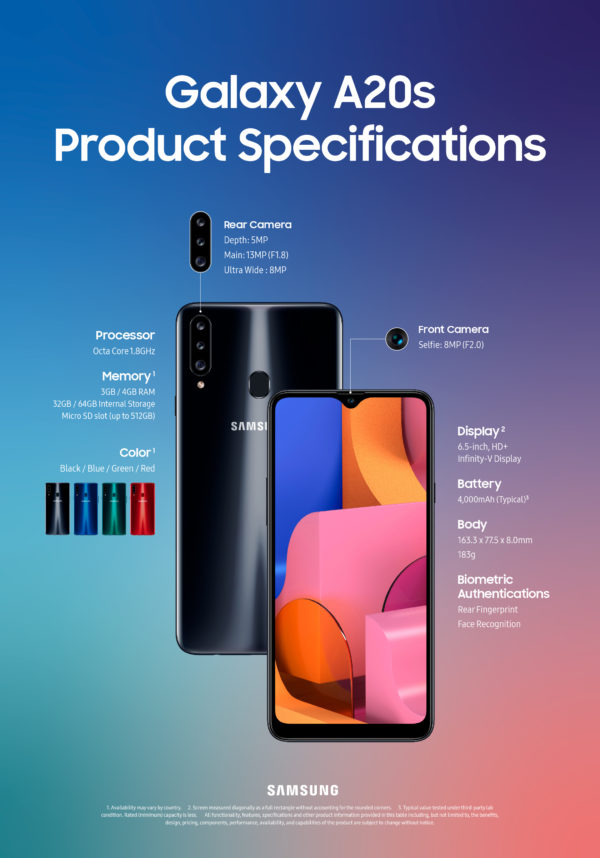