These two phones have one thing in common, they’re both quite compact, for today’s standards, at least. It’s not that easy to find compact flagship Android smartphones these days, and both of these fit the bill.

The two devices are quite different, though. They’re different in many ways, so that should make for an interesting comparison. As per usual, we’ll compare the two phones across a number of categories in order to see how they stack up. That’s it, let’s kick off the Samsung Galaxy Note 10 vs Sony Xperia 5 comparison. 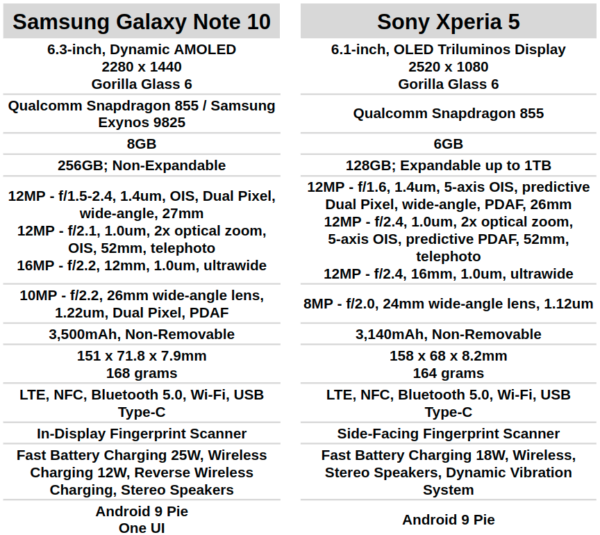 Both of these handsets are made out of metal and glass. They do feel completely different in hand. Truth be said, both are quite slippery, there’s no way around that. Despite that, though, in-hand feel is considerably different.

The Sony Xperia 5 comes with a taller display aspect ratio, and is the taller one of the two phones. That handset is also considerably narrower than the Galaxy Note 10. The Galaxy Note 10 is 151mm tall, and 71.8mm wide. The Xperia 5, on the other hand, is 158mm tall, and 68mm wide.

The two devices are quite similar in terms of thickness, though, 7.9mm vs 8.2mm, respectively. The Galaxy Note 10’s corners are sharper than the Xperia 5’s, which makes the phone a bit more difficult to handle, in addition to its being wider.

The Xperia 5 has thicker bezels, but it does not have a display camera hole like the Galaxy Note 10. Both phones offer three cameras on the back, and those cameras are placed in the same position.

Both of these phones are really nice-looking. Both designs are really great in their own right, and you can’t go wrong with either one. If you prefer wider display aspect ratios, and narrower devices, the Xperia 5 is a better choice. If you don’t mind the display camera hole, or sharp corners of the Galaxy Note 10, go for it. 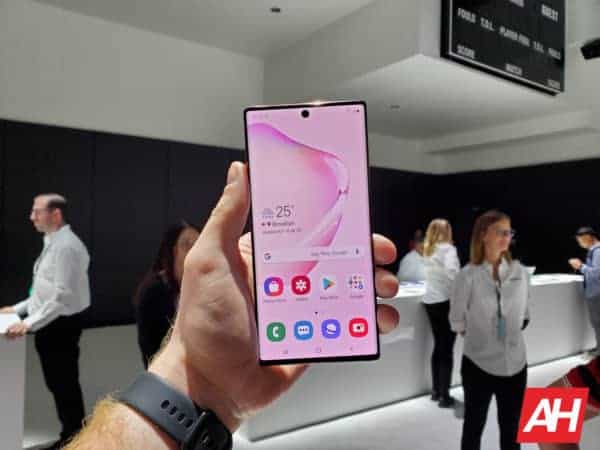 The display size on these two phones is rather similar, though the Galaxy Note 10’s unit is a bit larger. The Galaxy Note 10 comes with a 6.3-inch panel, while the Xperia 5 offers a 6.1-inch unit.

Both displays are well-protected by a sheet of Gorilla Glass 6. The Galaxy Note 10 utilizes a 19:9 display aspect ratio, while the Xperia 5 comes with a 21:9 aspect ratio.

The Galaxy Note 10 supports HDR10+, while the Xperia 5’s display is boosted by Sony’s X-Reality Engine. Truth be said, both displays are great, they really are. We do prefer the Galaxy Note 10’s panel a bit more. It looks a bit better to the naked eye, in our opinion, plus we prefer that aspect ratio. Both displays offer great colors, viewing angles, and contrast, though.

So, what about performance? Well, as you’d expect, both devices are at the top of their game in this regard. Both phones are flagship-grade, and are new at the same time. We did not notice any problems with either of the two devices. We did spend considerably less time with the Xperia 5, though.

Both devices are fueled by the Snapdragon 855, though the Galaxy Note 10 is equipped with the Exynos 9825 in Europe and India. The Galaxy Note 10 packs more RAM than the Xperia 5, 8GB compared to 6GB.

It is worth noting that the Galaxy Note 10 comes with UFS 3.0 flash storage. We’re not sure what the Xperia 5 packs in, but it’s probably UFS 2.1, like the Xperia 1. That gives a slight edge to the Galaxy Note 10, in addition to its RAM advantage. Well, it gives it an advantage for the future, at the very least.

On the other hand, Sony’s software is much lighter than Samsung’s. Samsung did clean up One UI quite a bit, but it’s still a rather heavy skin littered with Samsung’s services. Sony did pre-install some of its own stuff on the Xperia 5, but not nearly as much as Samsung.

As things stand at the moment, we cannot decide on a winner in this category. Both devices offer great performance, and are pretty much equal in that regard.

The Samsung Galaxy Note 10 comes with a considerably larger battery than the Xperia 5. It does have a larger display, but not by much. The phone includes a 3,500mAh battery, while the Xperia 5 ships with a 3,140mAh unit.

We did not get a chance to fully test the Xperia 5’s battery, but it doesn’t look good on paper. The Galaxy Note 10 does not really offer stellar battery life as it is, so if the Xperia 5’s is worse, then that’s not good. Based on its hardware, it will probably offer more endurance than the Galaxy Note 10’s.

For most people, smartphones are the only cameras they own. So, it’s quite important that those phones have good cameras. Well, you’ll be glad to know that both of these phones have great cameras. We wouldn’t say that they’re best out there, but they’re really good.

The Galaxy Note 10 improves upon what the Galaxy S10 had to offer. Samsung didn’t really change anything in terms of hardware, but it improved on the software side. The Galaxy Note 10 is notably better when it comes to low light shots. Pictures taken with the phone also offer really good dynamic range, and there are no major complaints here.

Something similar can be said for the Xperia 5. The Xperia 5 has the same camera setup as the Xperia 1. We’d say that the end product is a step behind the Galaxy Note 10, but not by much. We did not get a lot of time with the Xperia 5’s camera, but it seems like the results are better than on the Xperia 1. Sony made some improvements, and shots look noticeably better in low light.

The Galaxy Note 10 can provide you with 32-bit/384kHz audio, while the Xperia 5 tops off at 24-bit/192kHz audio. Still, both phones sound really good through a decent pair of headphones, even though the Galaxy Note 10 has an advantage. It simply offers crisper sound with more balance.

Unfortunately, neither of the two phones offer a 3.5mm headphone jack. All in all, the Galaxy Note 10 is the winner here.

That brings us to the end of the Samsung Galaxy Note 10 vs Sony Xperia 5 comparison. One thing that we barely mentioned is the S Pen stylus. That’s because the Xperia 5 does not offer a stylus, so we did not have anything to compare it to. If you’re in need of a stylus, the Galaxy Note 10 offers the best one, that’s for sure.

Both of these phones are great, there’s no doubt about that. It all depends on what you need, though. Each of the two phones has its advantages and disadvantages. The Galaxy Note 10, though, managed to win this comparison, by winning in most categories.