It’s time to pit the OnePlus 7 Pro vs OnePlus 7T. OnePlus had introduced the OnePlus 7T handset during yesterday’s press event, as of writing this article. That being said, this is the only T series phone that got announced on September 26, and it actually competes with the OnePlus 7 Pro, in a way.

That being said, some of you are probably trying to decide which of the two phones to get. Both are great, and both have similar features, but the OnePlus 7T is more affordable. It’s time to pit OnePlus 7 Pro vs OnePlus 7T in order to compare them. 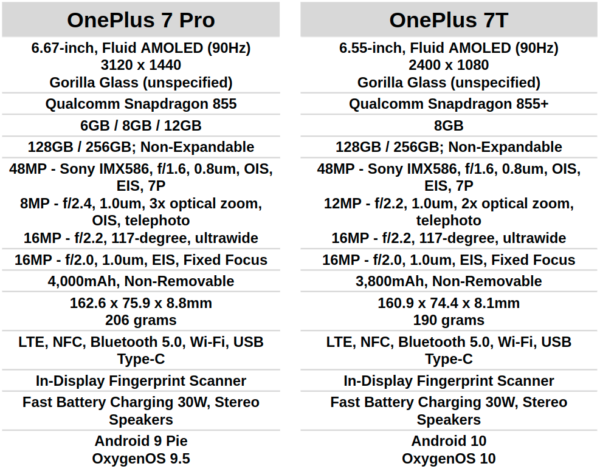 The two phones are made of similar materials, but they both look and feel different. In-hand feel is different despite the fact they’re both made out of metal and glass. Why is that? Well, the OnePlus 7T is lighter, shorter, narrower, and thinner than the OnePlus 7 Pro. The difference is not huge, but it’s noticeable.

The OnePlus 7 Pro does look more appealing to the eye, though. Its camera setup on the back offers a sleeker design. The camera oreo on the back of the OnePlus 7T looks plain weird, it’s not really aesthetically pleasing.

The OnePlus 7 Pro, though, features a 6.65-inch QHD+ curved Fluid AMOLED panel. Its display also offers 90Hz refresh rate. Both of these displays are really good, but the OnePlus 7 Pro’s is sharper.

Truth be said, even when you look at them side by side, you won’t notice a big difference. It’s impossible to see that the OnePlus 7 Pro is sharper, as the company did a great job with the OnePlus 7T’s panel. In fact, the OnePlus 7T’s display will probably look better, due to decreased blue light emittance. OnePlus did some heavy tweaking on this display. 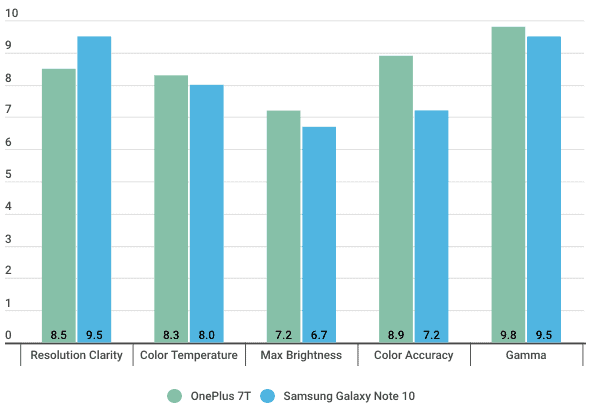 The OnePlus 7T’s display actually beast the Galaxy Note 10+’s display in all tests except the resolution one. The same goes for the OnePlus 7 Pro’s, but the difference is even higher. You can read more about that here. Both phones offer great contrast, punchy colors, and great viewing angles. The same can be said for those deep AMOLED blacks, of course. Having said all that, the OnePlus 7T is a surprising winner here.

OnePlus’ smartphones are almost always at the very top of the food chain when it comes to performance. The same is the case this time around. Both the OnePlus 7T and OnePlus 7 Pro are extremely great performers.

Both devices are backed by plenty of RAM, 8 or 12GB in the case of the OnePlus 7 Pro. The OnePlus 7T comes with 8GB of RAM, on the other hand. They both offer those super-fluid displays with high refresh rates, and OxygenOS on top of everything.

All that, in combination with UFS 3.0 flash storage and Android 10, results in an extremely fluid experience on both devices. They’re on par in this department, that’s for sure.

These two phones come with fairly similar specs, and software, so when everything is considered, the battery life should be on par. If that ends up being the case, the OnePlus 7T will have great battery life. The OnePlus 7T Pro is one of the best-performing flagships in the market at the moment, in terms of battery life.

The OnePlus 7T does come with a separate motor for macro photography, though. It can come way closer to a subject than the OnePlus 7 Pro, so this may even be worth the trade-off. At least for those of you who take macro shots more often than you use telephoto camera.

What about the end result? Well, we did not really get to fully test the OnePlus 7T’s camera yet, but the images do seem fairly similar to the ones OnePlus 7 Pro can provide. The OnePlus 7 Pro’s camera got a lot better after a couple of updates. OnePlus may further improve cameras on both phones, though, so keep that in mind.

Neither of these two phones have the best cameras in the market. They are not far behind, though, and most people will not have any complaints.

The OnePlus 7 Pro and OnePlus 7T are completely identical in the audio department. The two phones pack in identical speakers, and both come with Dolby Atmos sound. Both include two stereo speakers, the main one is placed on the bottom, while the secondary one is in an earpiece.

Neither of these two phones offers a 3.5mm headphone jack, by the way. Sound output is really good. It’s not the best we’ve heard, but these speakers are not half bad. It would be even better if both were front-facing, but we won’t push our luck. We don’t have any major complaints here, they’re pretty loud and the sound is clear enough.

That brings us to the very end of our OnePlus 7 Pro vs OnePlus 7T comparison. If we had to recommend you one of these two phones to buy, we’d say the OnePlus 7T. That phone is a better option for most people, for several reasons. First and foremost, it comes with a flat display which is better, despite its lower resolution. Second, it does not have a pop-up selfie camera, so no moving parts. And third, it’s more affordable.

Having said that, these two phones tied in most of your categories. When you look at all of them, and compare them… you’ll realize that these two phones are on the same playing field. This is a tie.