OPPO has confirmed that the OPPO Reno Ace will become official on October 10. This is the company’s upcoming flagship, if rumors are to be believed.

The OPPO Reno Ace had been rumored to include a whopping 65W charging, and the company has just confirmed that. OPPO confirmed that as part of its teaser image, which got published on Weibo (Chinese social media).

In this image, you can clearly see that the OPPO Reno Ace is coming. The whole name has been confirmed, along with 65W charging. Below that, October 10 has been highlighted as well.

The OPPO Reno Ace will probably resemble the Reno 2

OPPO had already announced the OPPO Reno 2, its newest mid-ranger. Well, the OPPO Reno Ace is expected to be a flagship variant of that device. So, the design of the phone will probably be quite similar.

The OPPO Reno Ace will feature extremely thin bezels. Its bezels will be almost non-existent. The phone will also include a pop-up selfie camera on top, while its display will sport rounded corners. The phone’s corners will also be rounded.

The device is rumored to include four cameras on the back. Those four cameras will be vertically-aligned, if the Reno 2 is any indication. OPPO’s logo will be placed on the back, along with a dua-LED flash.

The Snapdragon 855 Plus SoC is expected to fuel the Reno Ace, Qualcomm’s most powerful chip. This essentially means that the Reno Ace will become the most powerful phone in OPPO’s lineup. It will trump the OPPO Reno 10x Zoom and the Reno 5G.

OPPO’s 65W fast charging will be a considerable upgrade over the company’s 50W charging. 50W SuperVOOC charging was incredibly fast, and the 65W may be able to charge up the OPPO Reno Ace in less than half an hour.

It remains to be seen if OPPO will stick to the SuperVOOC naming, or will it change to something else. It may end up calling this 65W charging SuperVOOC 2.0, or something of the sort.

The phone is also rumored to include a 4,000mAh battery, and a 90Hz display. Speaking of which, the OPPO Reno Ace’s display may be similar to the OPPO Reno 2’s. Which means we may get a 6.55-inch fullHD+ or QHD+ Dynamic AMOLED pane, probably the latter.

Android 9 Pie will come pre-installed on the phone, along with OPPO’s ColorOS 6.0. The phone is expected to include a 3.5mm headphone jack, and two SIM card slots.

You can also expect plenty of RAM in this phone. It may even arrive in both 8GB and 12GB RAM variants, we’ll have to wait and see. 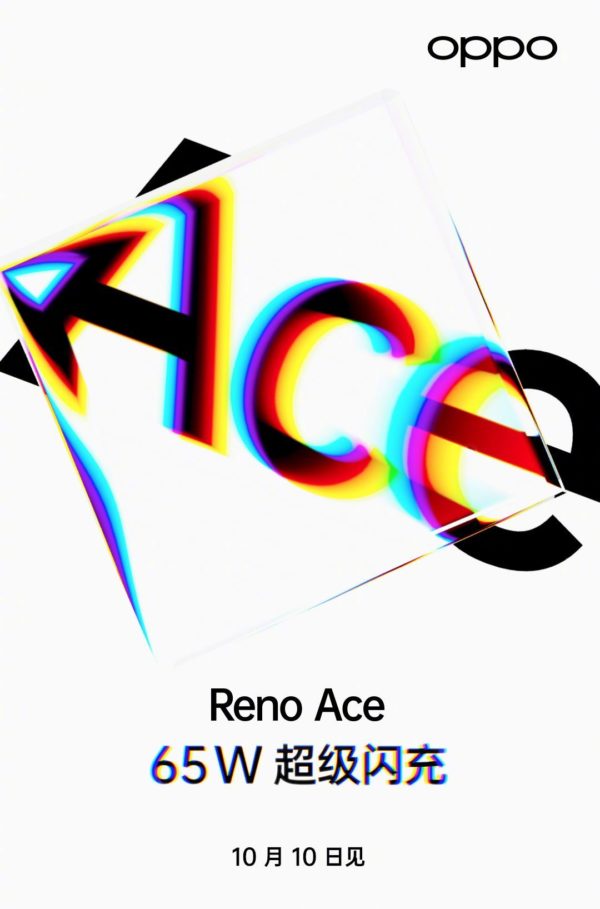