That didn’t take long, now did it? The Oculus Rift S is now more widely used than the entirety of the Windows Mixed Reality platform. This, according to the monthly Steam hardware survey from August 2019. Last month we saw quick gains for the Rift S and the Valve Index, and this month continues that trend.

In fact, despite having a 2-year head-start, multiple headsets from multiple vendors, and even price tags as low as $150 during sales, Windows Mixed Reality headsets as a platform only makes up 8.24% as of the Steam Hardware Survey taken at the end of August 2019. That’s compared to 10.85% of players using an Oculus Rift S; a VR HMD (head-mounted display) that just came out in May and sells for $400.

It’s also worth noting that neither the Oculus Rift S or any Windows Mixed Reality headset doesn’t rely on SteamVR to power the virtual reality experience. In fact, Steam is just one of the many stores where VR content can be purchased and run through, making it even more impressive that the Oculus Rift S is now more widely used than some other headsets and has already reached nearly 11% throughput in the SteamVR population.

So how does a 3-month-old headset somehow usurp an entire family of devices that not only has been around for 2 years but is also significantly less expensive? It’s all in the branding.

Facebook has been behind Oculus since the purchase of the company in 2014, and the amount of money Facebook has sunk into the platform has put Oculus in a position to win. It’s got the most mindshare of any VR HMD on the market and the semi-closed ecosystem that Oculus has built with its SDK and accompanying store has built a strong brand that’s ready for console-level success.

Oculus has also done an impeccable job of updating the Rift S and freeing it from the bugs that plagued the experience at launch. The suspect tracking issues were completely fixed in an update that was also delivered to the Oculus Quest some weeks later. Then the white flash glitch that was happening randomly also got fixed in the past couple of weeks, and now the Rift S is one of the easiest recommendations we can make if you want a headset with a simple setup.

The Valve Index’s success is quite impressive too, especially given that this is one of the most expensive HMDs on the market. At more than double the price of the Oculus Rift S for the complete setup, the $999 Valve Index bundle isn’t cheap by any means, but Valve offers existing HTC Vive owners a way to upgrade their headsets and controllers separately for a bit less cash.

$499 will net a Valve Index HMD by itself, which can completely replace your aging HTC Vive HMD without any issues. Likewise, $279 will upgrade the Vive wands to Valve Index controllers, which feature the most advanced inputs and hand presence on the market. The Index doubled its market share from July to August, a sign that Valve’s supply constraints are truly over. 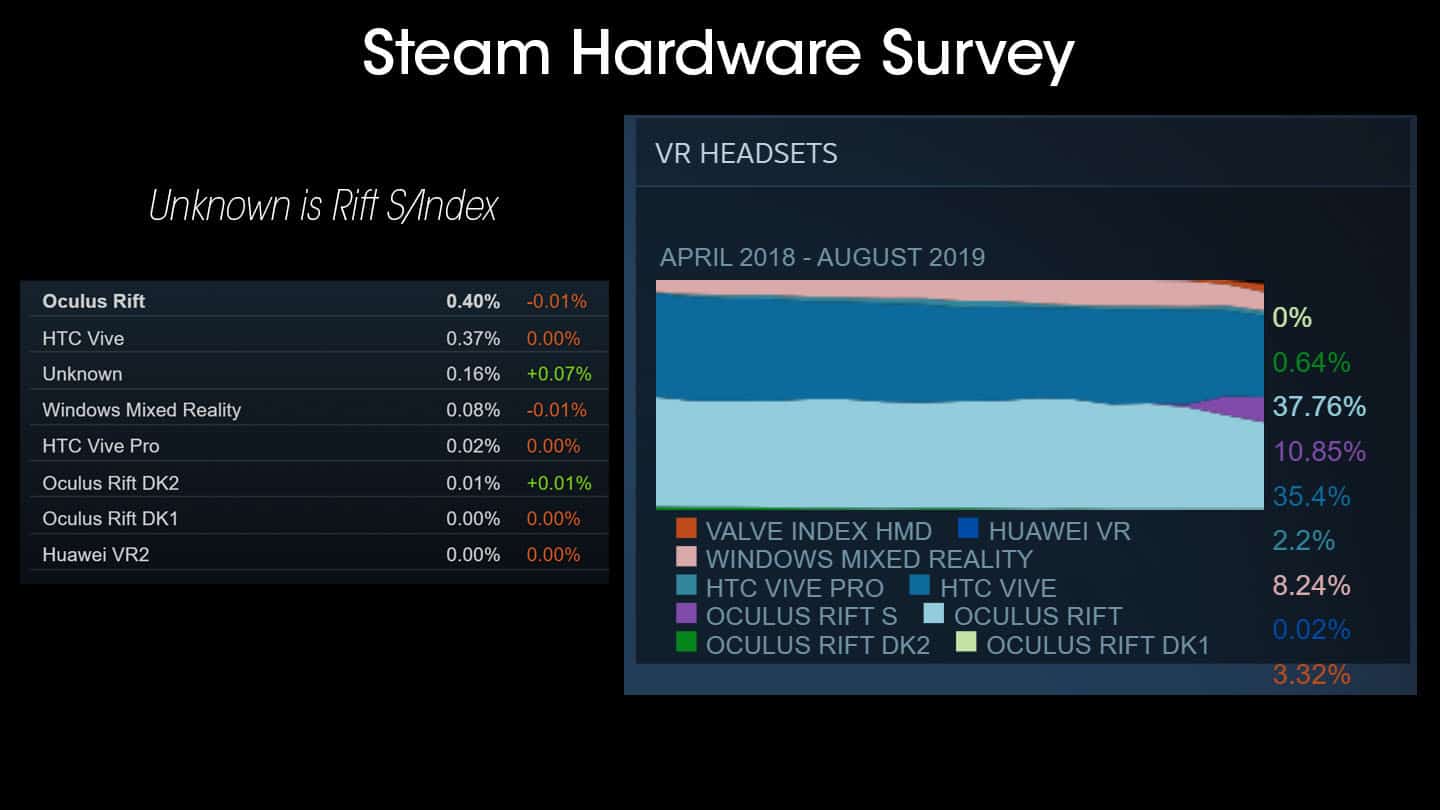