Google has just made a pile of Google Assistant-related announcements at IFA. The web giant introduced a new Ambient Mode for Google Assistant, and also announced Assistant support in a bunch of third-party speakers and headphones. The company is also touting Assistant integration in more Android TVs, as well as in smart home products from the likes of Bosch, Siemens, Neff, Thermador, and Nuki.

Google Assistant can now also make voice and video calls through the WhatsApp Android app. The virtual digital assistant is now available in more than 30 languages and 80 countries, the company said.

With Assistant’s new Ambient Mode, Google is trying to make your Android phones and tablets more helpful in the home, even when they are charging or resting. This new mode will turn those devices into a smart display, something like a Google Nest Hub.

Ambient Mode is a “visual overview” that replaces the lock screen of your charging Android device. It will make it easier to see calendar info, notifications, weather, reminders, music controls, and smart home controls. A single tap on the widgets will give you fullscreen controls with a blurred background that isn’t stark white. When the device is not in use, it will display your Google Photos.

A big focus on voice controls, and Ambient Mode on Google Assistant will replicate a lot of Nest Hub’s functionalities. 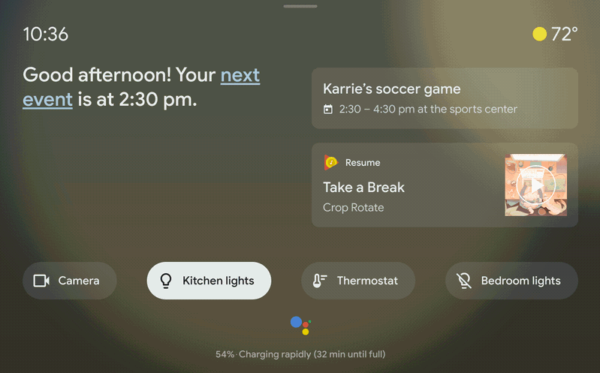 Ambient Mode will be initially available in a couple of Lenovo tablets — the Lenovo Smart Tab M8 HD and the Lenovo Yoga Smart Tab. The former activates Ambient mode when placed in its smart charging station, while the latter does so when you pop out its kickstand. Two upcoming Nokia phones, the Nokia 7.2 and Nokia 6.2, will also get Google Assistant’s Ambient Mode. The upcoming Google Pixel 4 seems like a good candidate to get the Ambient Mode next.

In addition to the Ambient Mode, the Google Assistant is also making its way to more headphones, speakers, soundbars, Android TVs, and smart home products.

Google is expanding the Assistant to more Android TVs as well. TVs from Hisense, Sony, TCL, Philips, Haier, Sharp, and several other top brands will all come equipped with the Google Assistant. Google also announced an Assistant-equipped 7-inch smart display from Lenovo.

Home appliances from brands like Bosch, Siemens, Neff, Thermador, Electrolux, Liebherr, and Gaggenau are getting Google Assistant as well. The Bosch SmartHome Plug, Thermostat and Light, as well as the Nuki Smart Lock and door opener, will also work with the Assistant.