Google is launching new voices for Google Assistant in nine more languages. Google Assistant will now have a second voice option in German, French, Dutch, Norwegian, Italian, Korean, Japanese, and English for India and the UK.

The new voices have begun rolling out for users in the respective countries starting this week.

Google Assistant already has 11 English voices to choose from in the United States. And while the Assistant can now speak more than 30 different languages, it only has one voice in most of them — the traditional female-sounding voice.

Google is now adding a secondary voice option for some of those languages.

The new voices are built with DeepMind’s WaveNet technology. Google says the state-of-the-art technology brings “great pitch and pacing”, making the voices sound natural and not as robotic as the assistant voices we’ve gotten used to. They obviously don’t sound like an actual person, though.

While the newly added voices are traditionally male-sounding, Google is not gendering them. Instead, the voices are displayed by color. You can choose from “orange” or “red” as your Google Assistant voice. Google will also randomize the colors and the order they’re presented in.

Apparently, Google has learned that people enjoy choosing between voices to find one that sounds right to them. “We think it’s important to present these voices without any labels,” the company says in its blog post announcing the new voices. 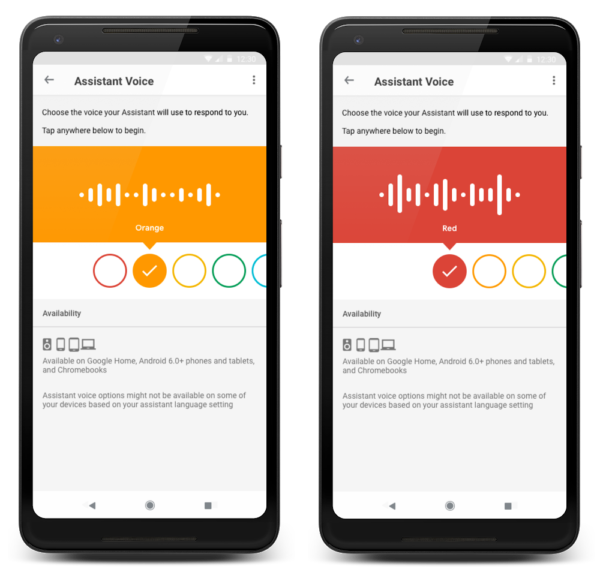 New voice is chosen at random

When you set up Google Assistant for the first time in one of the countries getting the new voices, you’ll be randomly assigned one of the voices. This gives you a 50/50 chance of getting one of two voices — either the “red” voice or the “orange” voice.

You can, of course, choose a different voice later on if you want to. Google says it’s “trying to help more people experiment with the different voices.”

Google is urging users in these countries to try out the new Google Assistant voices. “A lot of people are surprised to learn that they don’t always stick with the voice they’ve been using, so give it a shot,” the company says. “You might just find one that sounds even better than the one you’ve been using.”