A new flurry of patents has revealed four new Google Home competitors from LG, coming in the form of a new smart speaker and three new smart displays. LG launched their first smart speaker and smart display last Spring with some rather ridiculous-sounding names, but have been shortened to WK7 and WK9 by most folks. LG differentiated their previous lines from other smart speakers and displays by including their ThinQ software, which allows direct interfacing with all of LG’s ThinQ-branded appliances and devices.

While there’s no telling if LG is coming up with catchier names for its latest devices, what we do know is that they appear to be doubling down on the smart speaker industry. We consider these four new devices to be Google Home competitors mainly because they appear to be powered by the same software experience that you’ll find on those devices. Folks that would prefer Alexa or another virtual assistant will have to choose a different product, as these will all use Google Assistant. 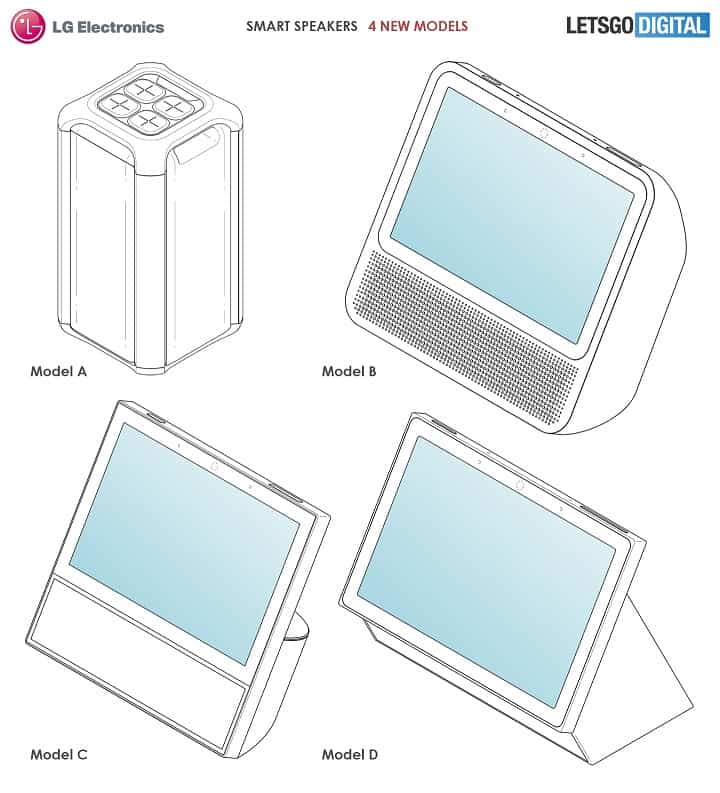 Let’s Go Digital uncovered these patents and has hosted the PDFs, although they’re in Korean, so you’ll need to translate them if you’re wanting to read the details.

First up is Model A, which is a smart speaker with a radically different design than the LG WK7. You’ll find the main buttons on top that serve multiple functions and a large power button on one of the sides. A different side actually appears to feature a screen as well, which makes this a rather interesting smart speaker, as other smart speakers don’t usually have a display of any kind.

Model B very closely resembles the Facebok Portal smart display in a number of ways and even features a camera up top as well. In fact, all three new smart displays from LG have cameras on them, just above the 16:9 horizontally configured display, as well as microphones and possibly ambient sensors. The buttons on the top appear to be a volume rocker (on the right) and possibly a power button on the top left. We’d surmise that this could be used to switch the display in and out of ambient mode The Google Nest Hub can transition to this state by swiping all the cards away, but it would be nice to have a single button perform this function, instead.

Model C much more closely resembles the original Amazon Echo Show and is considerably thinner and less “fun” looking than Model B. While Model B is thought to be mainly a light, plastic device, Model C appears to have cloth and other more “premium-feeling” materials adorning its surface. This would make it feel much more at home on a desk or in an office.

Model D features a wider screen than the other two smart displays and more closely resembles a more squared-off version of the original Google Home Hub (now known as the Google Nest Hub). What’s rather odd about this display, apart from the wider aspect ratio, is the fact that it doesn’t have a front-facing speaker yet still has a front-facing camera above its display. The speaker is likely nestled within the base, just as the Google Nest Hub’s is, and likely helps weigh the device down and stabilize the larger display up front.

We certainly expect to see something involving these new smart speakers at LG’s IFA 2019 press conference this week.