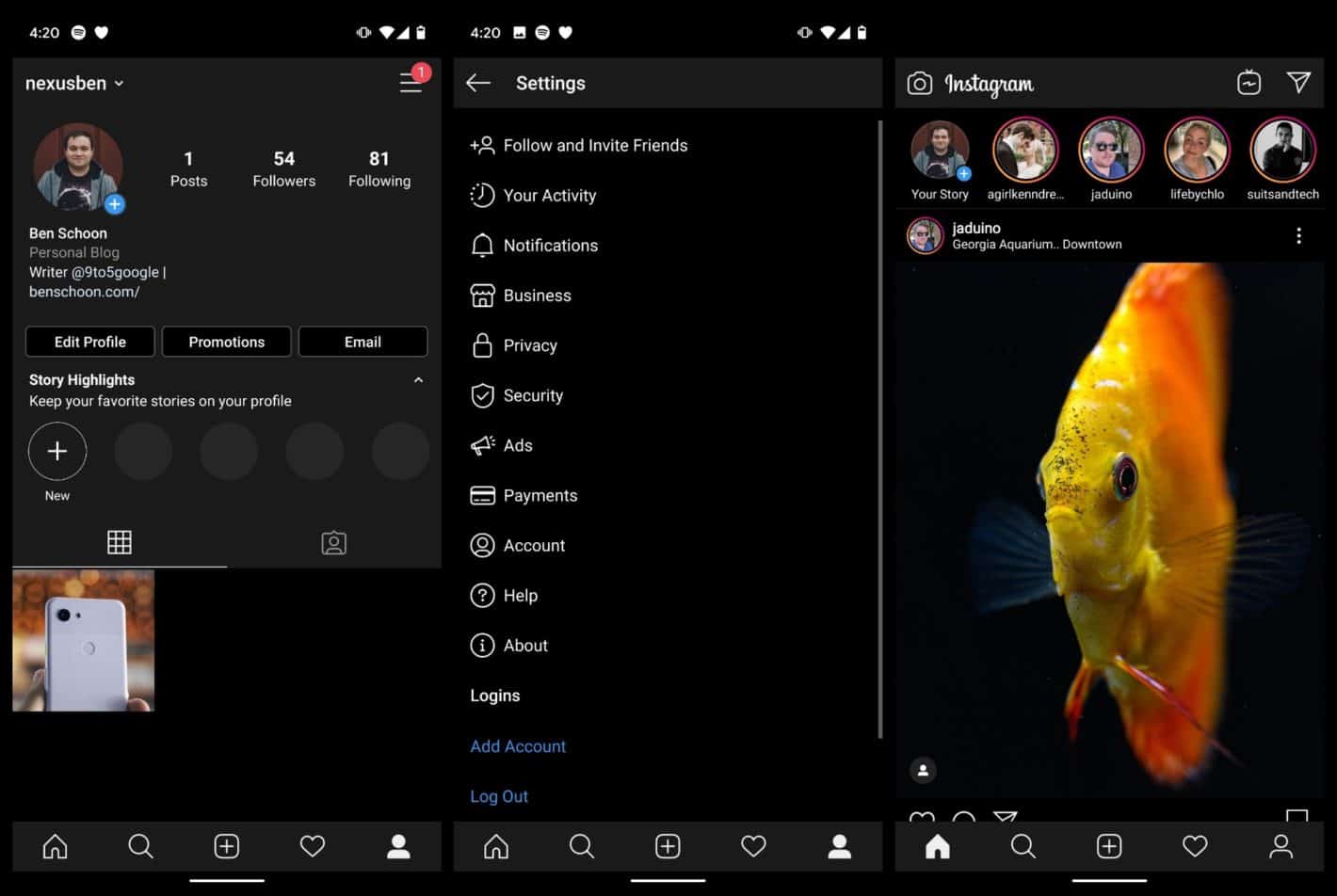 Instagram has decided to board the dark mode train, it seems. The company is currently testing its dark mode implementation via the beta channel.

An initial report surfaced yesterday, claiming that this is being tested on Android 10 only, but that doesn't seem to be the case. Some users with older versions of Android (Android 9 Pie users report this) who are running beta also got the option.

Dark mode is available to Instagram beta users, but not all of them

Instagram's dark mode doesn't seem to be available to all beta users, though. This feature seems to be rolling out either to specific users only, or it is a gradual rollout, which is why not everyone can see it.

Whatever the case may be, dark mode is coming to Instagram. It is worth noting that users who got this feature on Android 9 Pie are running Samsung phones. Several reports arrived, but it seems like there's a bug in that build, as status bar icons are not visible.

This is a beta build after all, so some bugs are expected, of course. Facebook will hopefully find a way to squash those bugs soon, and push this feature to the stable build.

Instagram is overwhelmingly white, it has always been, more or less. In order to counter that, and join the current trend, Instagram has opted to introduce a dark mode as well. That has been a highly-requested feature, maybe even the most-requested one.

It will probably roll out in a couple of weeks

Considering that this feature is in beta, we're expecting it to reach the stable build in the coming weeks. We cannot say when exactly will that happen, however.

If you'd like to install beta, and see if the dark mode is available to you, you can do that. A beta channel is available directly from the Google Play Store via this link. If you don't like to switch to a beta channel, you can download the app manually from APK Mirror, and sideload it. Click here if you're interested.

Many companies have been pushing the dark mode feature to their apps over the last couple of months. Dark themes have been available for a long time, but Google started a real trend earlier this year.

Google started pushing out a dark theme to its applications in preparation for Android 10. Android 10 tones down colors (as far as app design is concerned), and pushes even more white color into the mix. This is why Google opted to counter that, and offer a dark mode as well.

Another reason is battery life. Dark themes help phones with AMOLED displays to preserve battery. Since Google started this trend, many companies that did not plan on pushing out dark themes opted to do so.

Facebook had already pushed out a dark theme for its Messenger app, and it's coming to Facebook as well. Dark mode for Facebook is in early stages of development, it seems, though, so don't expect it to arrive soon. While you're waiting for dark theme to arrive to Instagram, check out some screenshots of it running within the app, they're included down below.