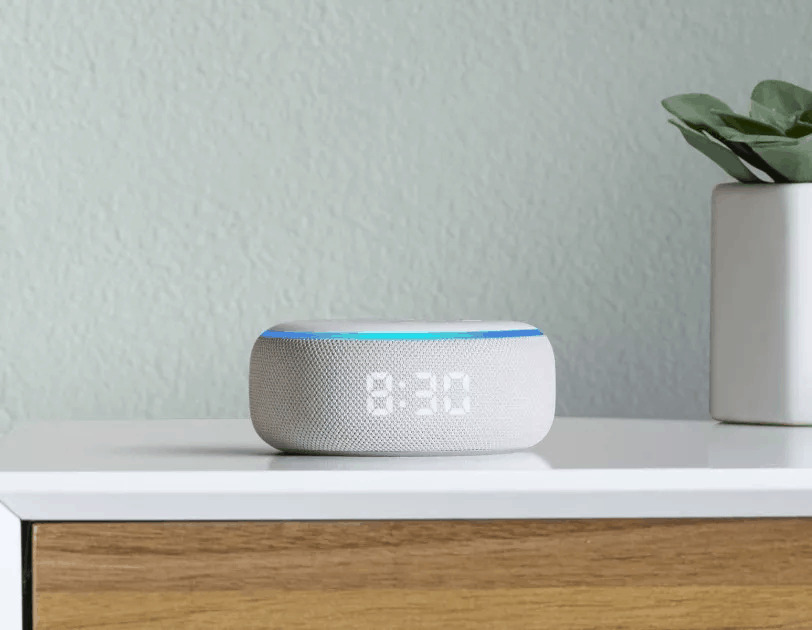 Amazon has announced the fourth-generation Echo Dot, and it has a clock. Along with a price jump.

The Echo Dot looks very familiar, in fact it is basically the same, from the outside as the current Echo Dot, but the main difference is the addition of that LED clock on the front.

Perfect for a bedside table

With the clock built-in to the front of the fourth-generation Echo Dot it makes it perfect for a bedside table. As you’re going to be able to wake up and immediately see what time it is, without having to pick up your phone.

There is also a snooze feature for the clock. Allowing you to simply tap the top of the Echo Dot and snooze it, giving you an extra nine minutes of sleep.

Of course, the Echo Dot is still coming with Alexa, so you can also ask Alexa for the news, traffic, and weather in the morning. Or just play some music before you go to bed.

And if you have a Fire TV in your bedroom, it can be controlled with the Echo Dot or the Fire TV remote. But the Echo Dot would be always listening, making it a far more important way to control your TV.

Given the price and where Amazon thinks customers are going to put it, the Echo Dot is likely replacing the Echo Spot. Which was more than twice the price.

Echo Dot is finally going up in price

It’s not a huge jump though. It’s going to cost you $59.99, so that’s $10 more than all previous Echo Dots. That is a 20-percent price increase, but when you think about it, it’s worth the price.

You’re getting a clock built-in here, as well as better sound quality, and of course you’re still getting Amazon Alexa.

Pre-orders for the Echo Dot fourth-generation is going to start today, at $59.99.

Though it’s still not clear when the echo Dot will actually start shipping. It’s likely going to be sometime in October, well before Black Friday – as it’ll likely drop to $40 for Black Friday.

Amazon is also keeping the previous Echo Dot around at its regular price of $49.99. This makes sense, seeing as there’s not a lot of changes with the new Echo Dot, to warrant a major price drop. On top of that, it gives Amazon another price point for customers to get Alexa.

You’ll be able to pre-order your Echo Dot fourth-generation later today, at this link.