Stadia has feature after feature on offer for users, and Crowd Choice is one that users should be excited about.

This is because it takes users who are viewing a game stream and turns them into active participants for that game. It’s a way for viewers to indirectly play the game that they’re watching someone else play, which is way better than just watching.

Game live streams are nothing new. They happen on Twitch and YouTube daily. In those streams, viewers are often engaged while being asked if they’d like the streamer to do certain things. This is a form of active participation but the Stadia Crowd Choice feature is taking it to the next level.

Developer-Created Polls That Viewers Can Answer

For Crowd Choice to work as intended, developers will need to make use of the tool by implementing it into their games on Stadia. Beyond this, content creators streaming their gameplay from Stadia to YouTube will need to enable this mode.

When this happens users will see polls pop up at specific times. Discretion is completely at the hands of the developer here, so they choose when the polls show up. They also have the ability to choose which types of polls are inserted into the designated points in the gameplay.

If a creator wants easy engagement from their viewers, they can enable Crowd Choice. At the right moment a poll will appear and users will be able to basically vote on a choice that the streamer should make.

Think of this like a more exciting version of a choose-your-own-adventure game. Giving viewers the option to select which direction to move or which action to take.

Granted, the creator would still have to decide to make the same decision viewers are suggesting for it to feel like a choose your own adventure game, but you get the idea.

There are two types of polls which viewers will get to interact with if developers and creators decide to use them. 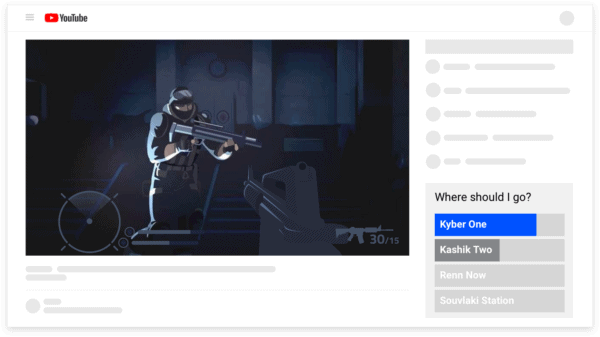 The first is a multiple choice poll (pictured above) and is just like it sounds. When viewing a stream, a poll will show up with multiple answers to an associated question. Viewers can then vote on which answer they like best, and that will be visible to the creator (streamer).

The other type of poll that Crowd Choice will offer is a Chat Poll. Here the same type of question may appear but instead of multiple answers that must be selected, viewers will be able to post their suggestions in chat. This makes for more possible choices that the creator is able to make based on the answers given by viewers. 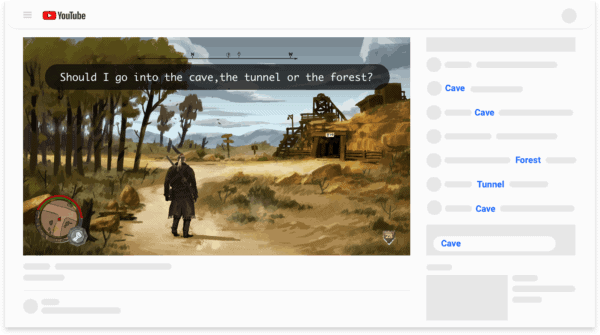 Sure, this is a tool aimed first at content creators and giving them a way to engage more with their stream viewers. But, it can be fun for the viewer too. As mentioned earlier it’s like being able to play part of the game without actually playing it.

Both polls would probably work well but are also both displayed in separate spots. Multiple choice polls show up in YouTube Live Chat. Meanwhile Chat Polls would show up directly in the game UI.

Polls won’t always show up in every single game. Remember, they’re at the developer’s discretion and therefore may not be added to a game. Google has strict guidelines in place for these kinds of polls too. Some may not meet the requirements from time to time.

Luckily for developers and streamers, games themselves won’t be in any danger. At least not in regards to being removed from the platform. In the event of a violation, Crowd Choice would simply be disabled.

Not likely, at least not in large quantities. This isn’t a game changing feature that will immediately draw in throngs of consumers.

That doesn’t mean it won’t sway some people from hopping on the Stadia platform. Crowd Choice could be a great way for streamers to interact with their viewers as it would allow viewers to feel more involved.

The prospect of voting on in-game polls could be great for viewers too. Especially when paired with Stadia’s Crowd Play feature.

Think about. You’re watching your favorite streamer play your favorite game. All of a sudden a Crowd Choice poll shows up. You answer, the streamer makes the choice based on the poll, and then you hop into the game with them through Crowd Play.