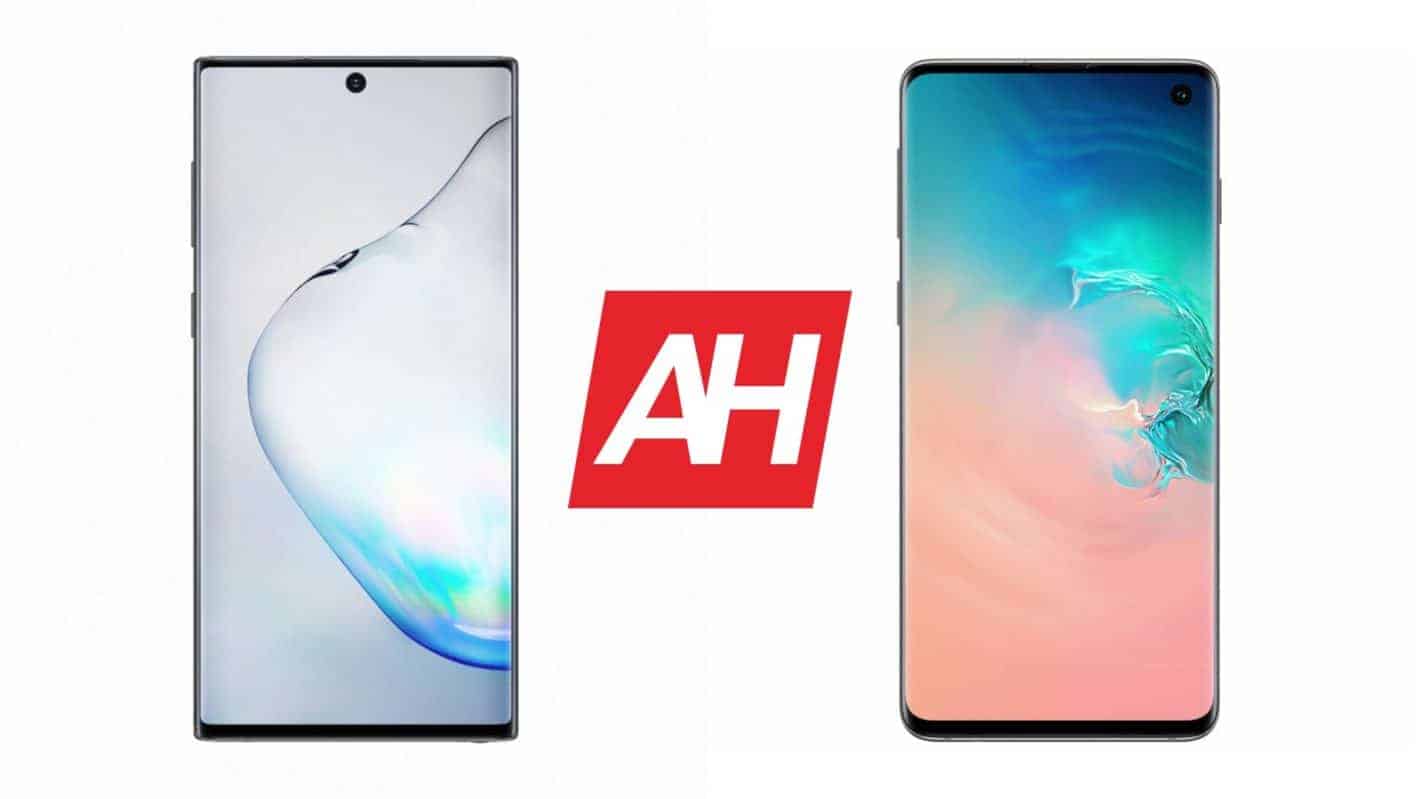 As is usually the case when it comes to our comparisons, we'll pit these two phones across a number of categories. We'll start with specifications, and move to design, display, performance, battery life, cameras, and audio from there. At the end of it all, a small conclusion will follow. 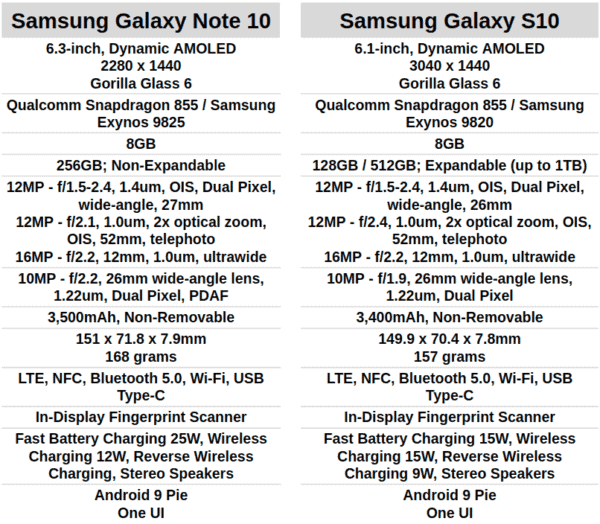 Both of these phones are made out of metal and glass, though they do feel different in the hand. The two phones also look quite a bit different as well. The Galaxy Note 10 comes with sharper edges, and less curve on the back. Both phones are quite slippery, but we find the Galaxy S10 easier to handle. That is the case because it offers more curves, and it has a smaller footprint, while it's also lighter.

Both phones include three cameras on the back, though the positioning of those cameras is different. The Galaxy Note 10 features three vertically-aligned cameras, which are located in the top-left corner of the phone's back. The Galaxy S10, on the other hand, sports horizontally-aligned sensors.

These two phones both have a display camera hole, and one camera in it. The Galaxy Note 10's camera hole is centered at the top of the display, while the Galaxy S10's is moved to the right. Both devices offer curved displays, and curved display corners.

We prefer the design of the Galaxy S10, mainly due to its curves, and the position of the display camera hole. It simply seems like a sleeker phone, and it's also a bit less slippery. Many people tend to prefer the Galaxy Note 10's design, though, and that's completely understandable. This is a sheer matter of personal preference, as the Galaxy Note 10 has thinner bezels. 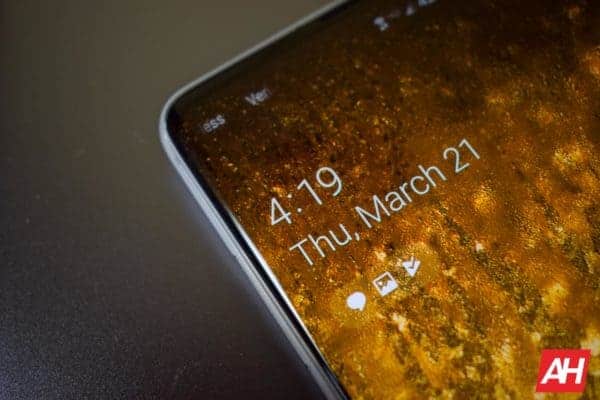 The two displays offer the same aspect ratio (19:9), and both support HDR10+ content. This category goes to the Galaxy S10, its display resolution was the decisive factor. 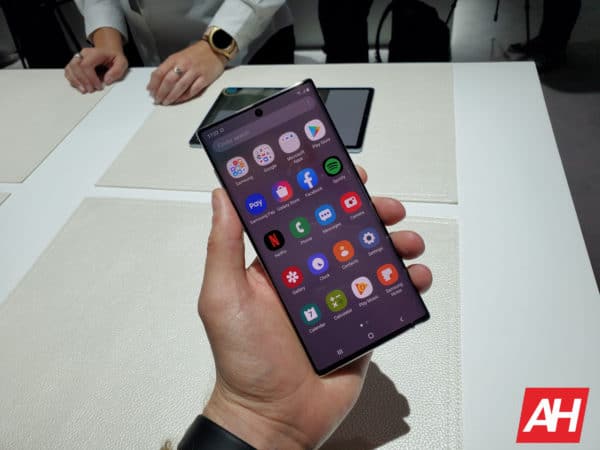 Samsung's brand new Note 10 handset felt really smooth during our time with it. We'll be able to say much more after a full review, but its hardware in combination with software really does work well.

The bottom line is, both phones are great performers. The Galaxy Note 10 is a bit more future proof due to its flash storage, and more powerful SoC in some regions, but you can't go wrong with either in this regard.

The Galaxy S10 was not a great performer when it comes to battery life. It offers really good battery life, but not excellent. Well, the Galaxy Note 10 may offer a completely different outcome. We cannot say that with utmost certainty, but it at least seems like it.

The Galaxy Note 10 offers a larger battery despite having a lower-res display, while it also has a more powerful and more power-efficient chip in most markets. The Galaxy Note 10 also offers faster wired charging. The device supports 25W charging while the Galaxy S10 caps out at 15W. 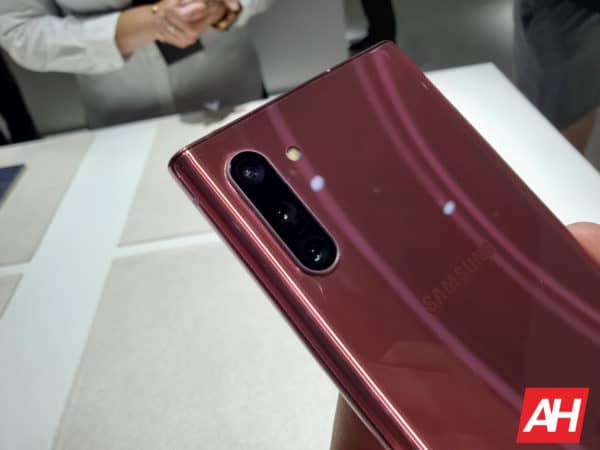 The Samsung Galaxy Note 10 and S10+ do not really have the same camera hardware, but they're not that far apart. Both phones include one 16-megapixel, and two 12-megapixel cameras on the back. On top of that, you will find a 10-megapixel camera on the front side of both devices.

The Galaxy Note 10's telephoto camera comes with a different lens. Its front-facing camera is also a bit different than the one on the Galaxy S10. Both phones offer variable aperture, and OIS.

Having said that, the Galaxy Note 10 seemed to be a better camera smartphone during our short time with it. We'll know far more soon, but it seemed to be able to deliver more balanced images with less grain. This essentially means that Samsung put some effort into the phone's software, as the hardware hasn't been drastically improved.

Both phones feature stereo speakers, and both are capable of producing 32-bit 384kHz audio. You will get Dolby Atmos support on both devices, and the same can be said for AKG-tuned stereo speakers.

The Samsung Galaxy S10 does have one advantage over the Galaxy Note 10, though. We're talking about a 3.5mm headphone jack, of course. The Galaxy Note 10 is the first smartphone flagship which does not offer such a port, and many people still use it.

Other than the fact the Galaxy Note 10 does not sport a 3.5mm headphone jack, these two phones are almost identical in the audio department. Both phones are capable of reproducing good sound via headphones and speakers, you won't be disappointed.

The Galaxy Note 10 is more expensive, and it's a better phone overall. The truth is, though, if you don't need an S Pen, it's not worth it over the Galaxy S10. That's at least our opinion. It does have a slight advantage in the camera department, and it offers better battery life, but the difference is not huge.

The Galaxy S10 even has an advantage or two, when it comes to audio, for example. Some people will also prefer the phone's design, over what the Galaxy Note 10 has to offer. Ultimately, it's up to you, but the Galaxy S10 is still a great buy, especially considering its price went down