This processor will fuel the Galaxy Note 10 and Galaxy Note 10+ in most countries out there, including the whole of Europe and India, amongst others. It is worth noting that Samsung will almost certainly opt for Qualcomm’s processor in the US, and quite possibly China as well, but we’ll see.

The Exynos 9825 is quite similar to the Exynos 9820 in many ways, though. The chip is equipped with two custom CPUs that Samsung created, in addition to two Cortex-A75 CPUs, and four Cortex-A55 CPUs.

In case you’re wondering what GPU is used here, well, the same one that the company included in the Exynos 9820, the ARM Mali-G76 MP12. It is worth noting that the Cortex-A75 CPU cores will run on a higher clock speed compared to the Exynos 9280, which was to be expected.

The Exynos 9825 does come with an integrated NPU (Neural Processing Unit), which will help with AI (Artificial Intelligence) tasks of the camera that the phone is used in, so the Galaxy Note 10, at least at first. This unit will also push through Augmented Reality (AR) tasks, in collaboration with the phone’s CPU.

This processor supports both UFS 2.1 and UFS 3.0 flash storage, though the Galaxy Note 10 will almost certainly include UFS 3.0, just like the OnePlus 7, OnePlus 7 Pro, and the Galaxy S10 5G.

The Exynos 9825 comes with an integrated 4G LTE-Advanced Pro model with 8x Carrier Aggregation. If an OEM pairs this chip with the Samsung Exynos 5100 5G modem, which supports both mmW and sub-6GHz 5G airwaves, you’ll end up with a 5G-capable device.

This chip also supports cameras of up to 22-megapixels in both back and front, and it supports LPDDR4X RAM as well. The chip can also work with dual camera setups (16 + 16-megapixel), while it supports video recording in 8K at 30fps, and 4K UHD video at 150fps.

All in all, the Exynos 9825 is a beastly processor, and next to the Snapdragon 855 Plus, the very best out there, at least in the mobile world. This processor will be mentioned later today when Samsung plans to introduce its new flagship smartphones, as it will fuel the vast majority of Galaxy Note 10 and Galaxy Note 10+ units. The announcement will kick off at 1PM PST, in you’re interested. 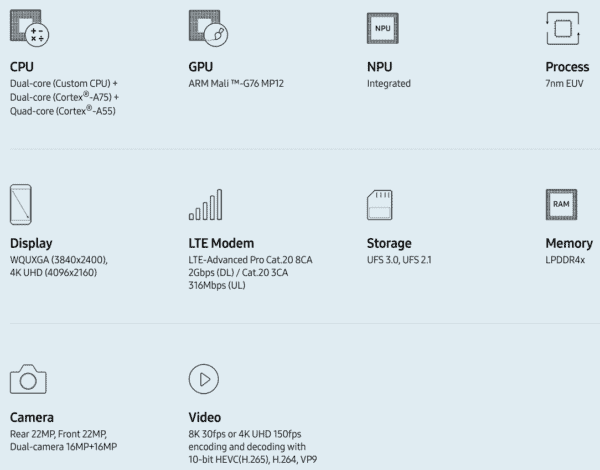