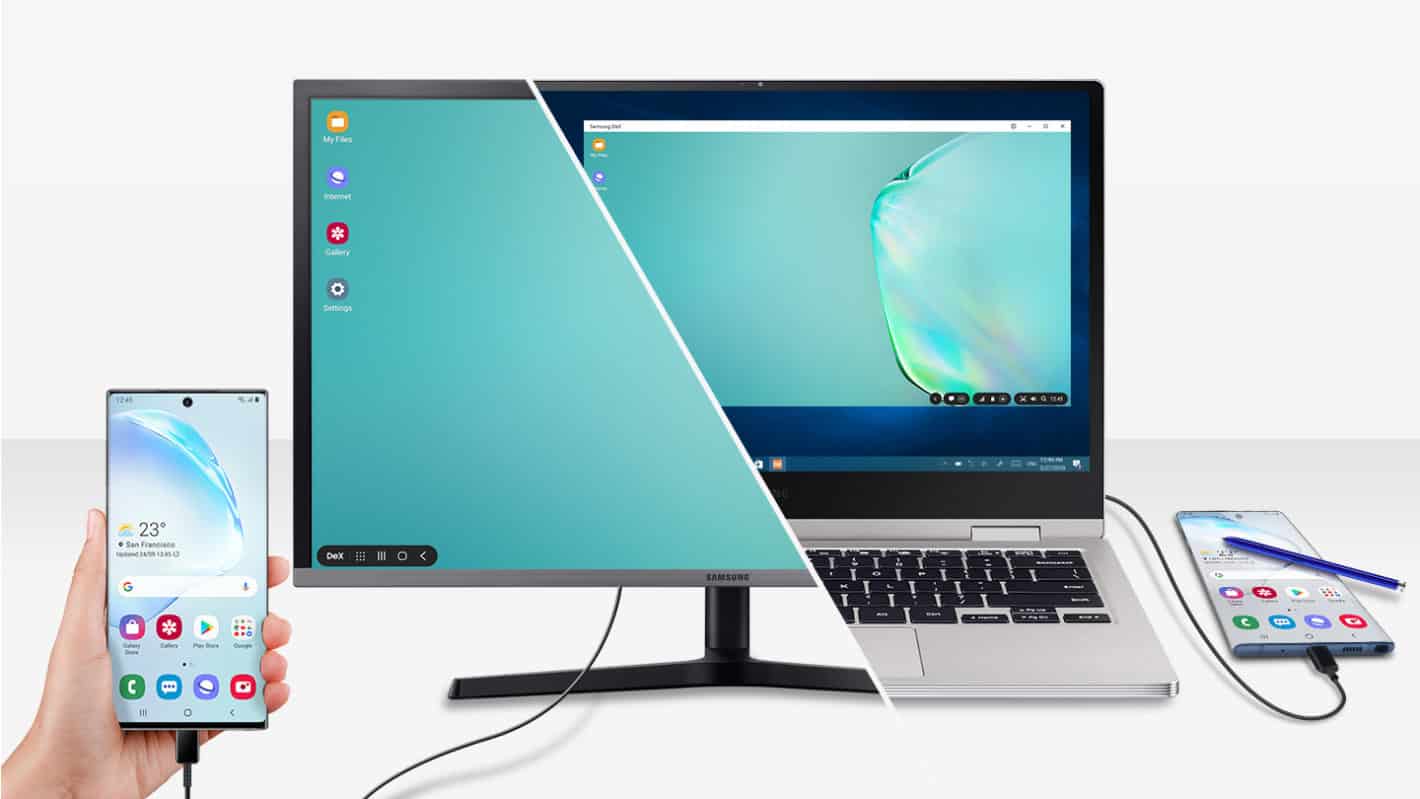 The USB Type-C cable here refers to the one users will need to charge their Galaxy Note 10. It’s that simple to bring your phone files onto the laptop and respond to calls and texts while dropping files from the laptop onto the virtual desktop and accessing them on a smartphone when on the go and away from the desk or office.

Though laptop owners are able to use Samsung DeX, only MacBook users were emphasized, so there’s no word on whether or not say, Samsung Chromebook users will be able to access DeX between their Galaxy Note 10 and Chromebook. Of course, Google does allow Samsung to customize its software experience; in the Chromebook Plus, for example, Samsung was able to incorporate the S Pen and integrated software for users, so perhaps its Chromebooks will get DeX integration. One can always hope.

Samsung introduced DeX to the world market in 2017 when it launched the Galaxy S8 and Galaxy S8 Plus. The idea behind DeX was to provide a PC-like experience with a computer, mouse, and keyboard — something akin to “PC on Mobile.”

At first, the Samsung DeX was a computer dock one could place his or her Galaxy S8 or Galaxy S8+ in, all while the dock was plugged into a computer monitor, and bring up their smartphone screen where they could access their files on the go. The dock was required to connect the phone to the monitor, and its $150 price tag from the outset didn’t help matters.

Samsung released the DeX charging dock to help charge the Galaxy S8 and Galaxy S8+ while providing a virtual desktop on a PC monitor for smartphone users. It was called “Samsung DeX” for “Samsung Desktop Experience,” and it makes sense why Samsung released it for just computer desktop users at first.

Ultimately, Samsung has worked to improve DeX over time, striving to make the concept more accessible to truly mobile users who don’t rely on computer desktop monitors anymore. Laptop users who take their computers on-the-go can now use the service by plugging in the charging cable.

One can always discuss the PC/mobile experience and many disagree over which is superior. Some still rely on Windows PCs for their business and life and believe that Windows PCs offer more capabilities than mobile devices ever will. Mobile users can always point out the portability of their devices, the fact that they’re convenient to carry wherever they go, and the fact that they get the same stuff done as their PC-toting counterparts.

At the end of the day, however, Samsung realizes that its customer base is heavily mobile. The smartphone experience is a mobile experience, and it doesn’t make sense to contain DeX exclusively for non-mobile PCs while providing support with them and their “mobile” Galaxy series.

The desktop experience exists on laptops as well as smartphones and PCs. A thriving customer base that is mobile-reliant mandates a mobile-reliant DeX solution.

And so, Samsung has finally gotten the last laugh at those who pointed out how “ridiculous” it is to buy a “pocket PC” of a smartphone while carrying a charging dock and an actual PC monitor around by which to perform everyday tasks. Now, users can be fully mobile in DeX.

There have been some rumors that Samsung is aiming for an ultimately wireless DeX experience. The new solution (USB Type-C cable access) isn’t there yet, but it’s a step in the right direction.